Labyrinth 35th anniversary tribute AS THE WORLD FALLS DOWN: A music video and cover with many references to one of my favourite fantasy movies

Yesterday night and for 3 days Labyrinth, one of my all time favourites, directed in 1986 by Jim Henson returns to the big screen. I'm happy that a new generation will get to know the Goblins and the magical "Underground". It is no secret for my followers I'm a big Jim Henson fan having made several Labyrinth and Dark Crystal tributes, but being such a special celebration, 35th anniversary, I wanted to do something special and so I re-shot last early fall and this year scenes to remake a version of one of my favourite songs in the soundtrack of the movie... and here is the result... A brand new version/video of "As the world falls Down"
At the end of the post I'll share previous Labyrinth covers I had made before, because this is not the first and won't be the last from this movie :)
Hope you like it... leave an encouraging comment here or on youtube if you can. I'll be grateful

Do you remember this movie? share your memories of it with me

It has become a favourite for many, and I'm surprised by how many were inspired or loved this movie when they were younger. What special memories you have... I know it sounds super inappropriate but of course as a child I had a big crush with the Goblin King (ahem!) (most innocent crush by the way, I noticed more adult details as I grew up) ahem! again!

As the world falls down (Lyrics)

I did not cover all the song, so this is the part I sing 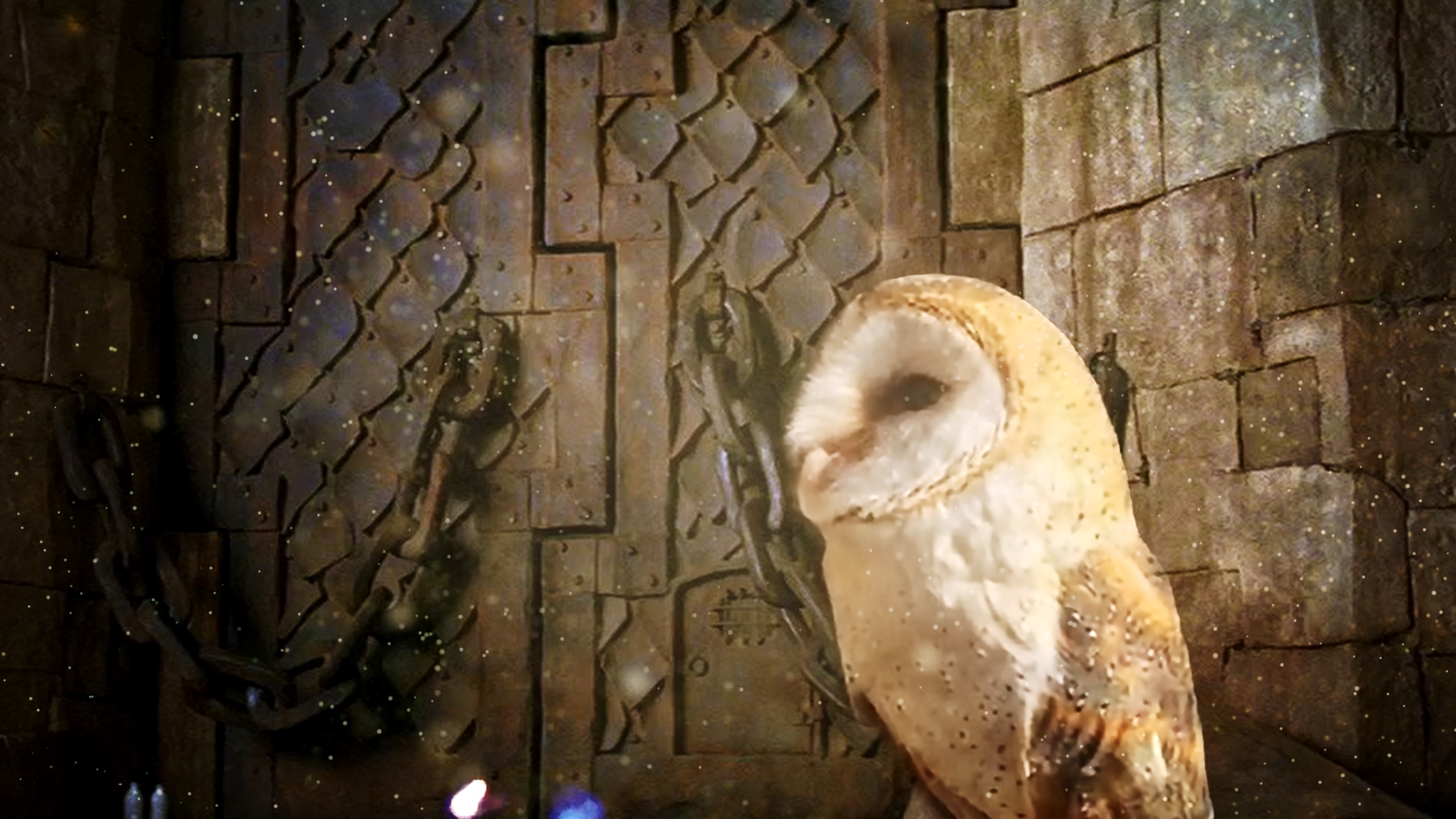 The was directed by Jim Henson, with a script co-written by Monty Python Terry Jones (who by the way died just a few days ago :). The Cast included a very young Jennifer Connelly and a mesmerizing David Bowie as Jareth the Goblin King of the Underground. A movie that is really a coming of age tale in which we doubt if the whole plot is just the imagination of a teenager girl or maybe there is something "more" Either way, and despite being a flop back in the day, it became a cult movie and as pretty much all Henson works one of my favourites. I hope you like it.

Find the fufunchis (the ratties) and other Easter Eggs

Here one of them, but you have more to be found.... :) Did you miss it? look at the gif carefully!

So as always there are some ratties to be found in the video, in this case 3 ratties (Ritva, Tuula, Taika) and a mouse (Fievel) as well as other easter eggs. The participation of Nyra the barn owl (thanks to her "Humom" Rosana for filming her feathered baby for the video) and also the worm from the Labyrinth
Alo! 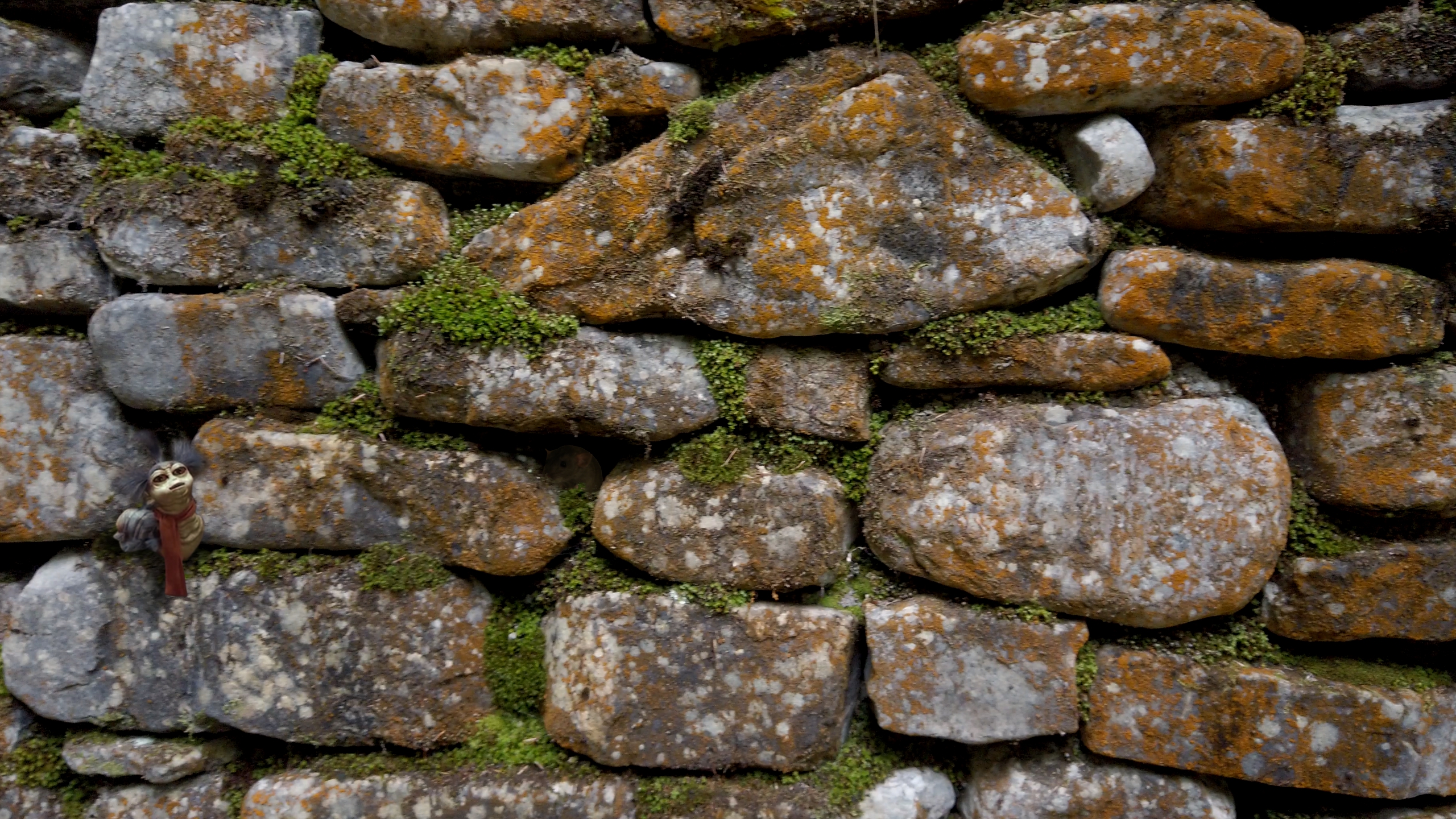 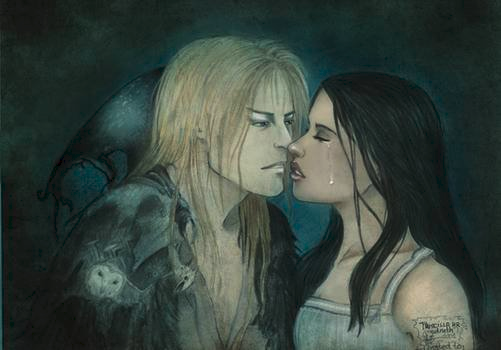 I also have to say I know almost the whole soundtrack by heart and I even was invited to perform the score to the 30th anniversary FAERIECON 2016 . Then I learned all the songs from Labyrinth in order to perform on a special event celebrating 3 decades after the release. There I met again with The Frouds (designers of the movie, Toby was the baby and actually works with his parents creating puppets as in Dark Crystal new series). Also in the picture Jim Henson's daughter and illustrator Charles Vess (Stardust, Sandman) 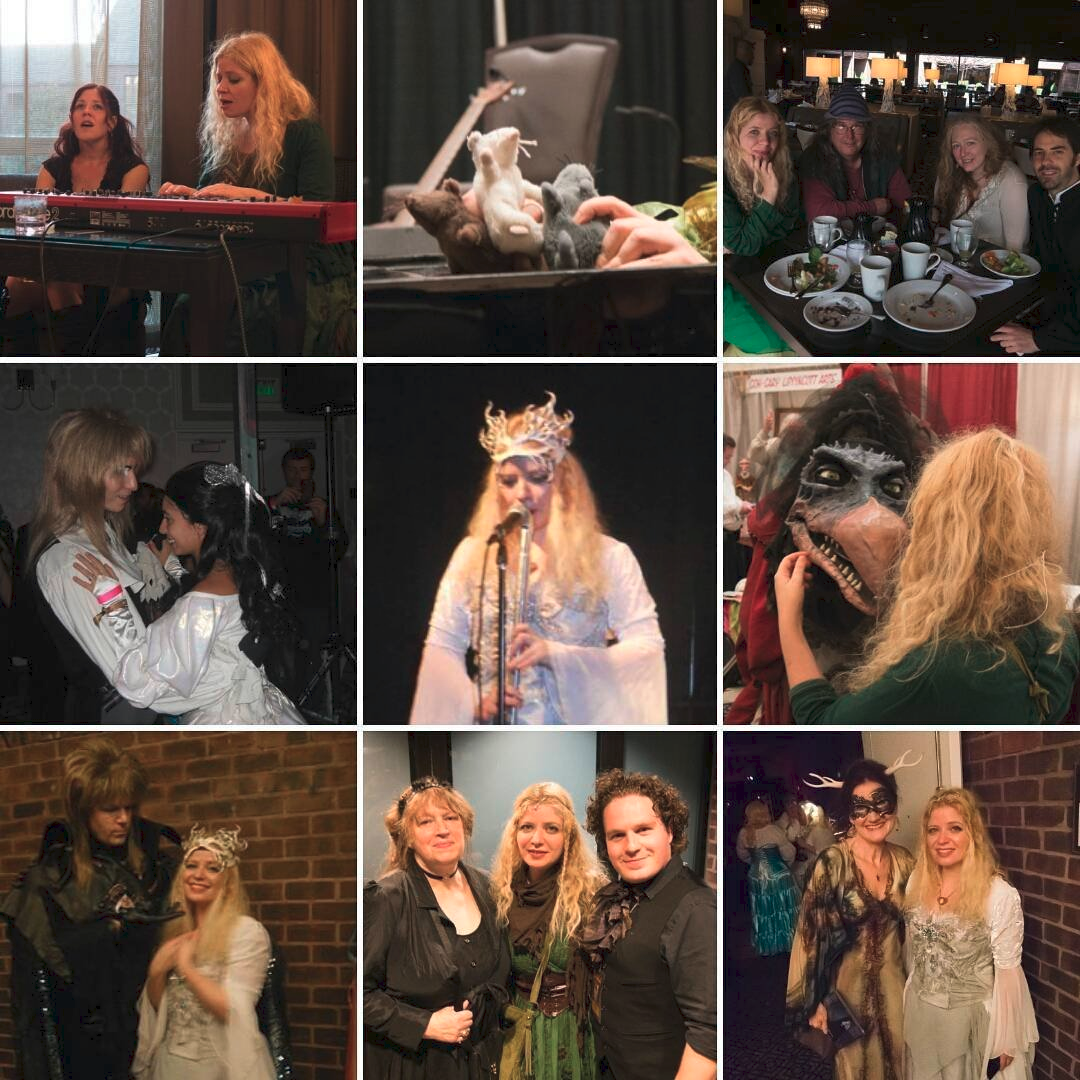 Other covers from this very movie I have recorded and shared before: Within you and Through Dangers untold. And intending to share even more soon. As I mentioned I know the entire score by heart.

A very hurting ballad sung by the Goblin King while he hides in the Escher Room that actually reveals he truly had feelings for Sarah and was playing by her game being what she wanted him to be, the villain of the story. This is a live take in my studio

This is another tribute to the movie Labyrinth directed by Jim Henson in 1986. This is the score music (composed by Trevor Jones) that sounds while Sarah recites the famous "Through Dangers Untold and Hardships unnumbered" passage. READ ALONG and enjoy the nostalgia. This is a LIVE version that was part of FAERIECON Live concert Yule Special. This video is made as a READ-ALONG and here are the words to recite: 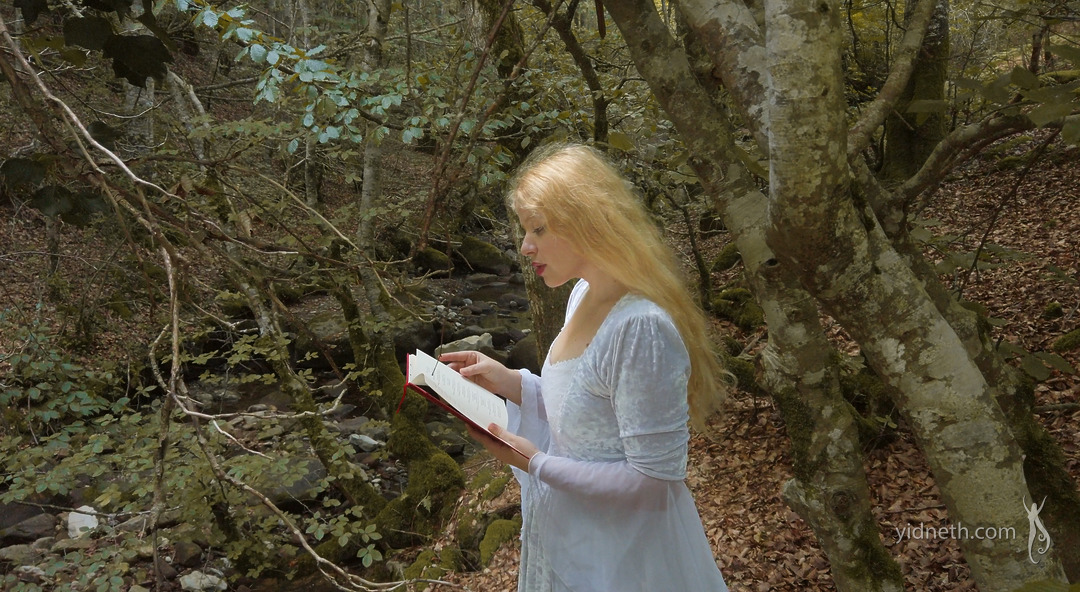 “Through dangers untold and hardships unnumbered I have fought my way here to the castle beyond the Goblin City to take back the child you have stolen, for my will is as strong as yours and my kingdom as great. You have no power over me!”

Above: The red Book Labyrinth that appears in the movie doesn't exist, it was made up for the movie though the lead Sarah reads the poem as if it were a published novel. For many years it was speculated that it was an actual book. 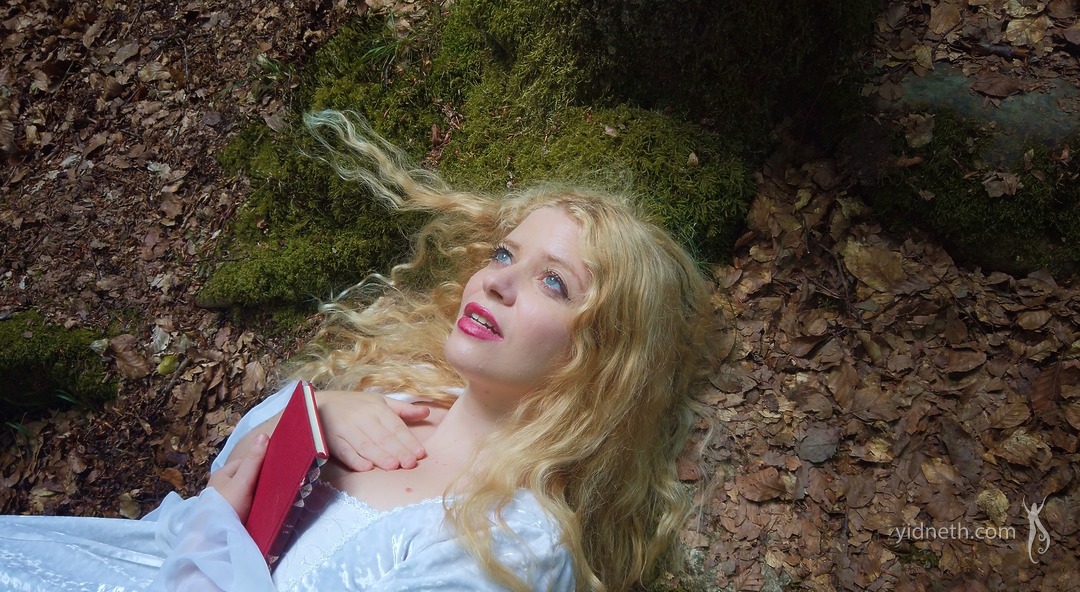 Filmed in Barcelona and Navarra
There are some glimpses of the old video (2014) but all the scenes with the white dress are filmed in Navarra, late Summer 2020 and 2021 coming to completion to this new video.

Congratulations, Priscilla! What a brilliant cover and what a most beautiful fantasy film starring a great musical hero of mine, more specifically David Bowie! A high-fantasy rebel, rebel! Keep up the good work! :)

Thank you, I love The Dark Crystal above all (also by Jim Henson and Frouds as designer) but Labyrinth is part of my childhood. I remember I had a crush with the Goblin King, hahah and I cannot believe it's been that long. I'm genuinely vintage now.

Yes, indeed, you were lucky to first watch 'Labyrinth' back in your childhood! That's commending! Lucky you, once again! Keep up the good work! :)

Beautiful, you took me back to my childhood. It was also my favorite. I fell in love with David Bowie.😍💕

I think though somehow inappropriate mos girls my generation had a crush with the Goblin King. I even used to read fanfics for a while about what would have happened when Sarah grew up as an adult... would she remember? I would, blush haha

I love the Labyrinth!

“It’s a crystal. Nothing more. But if you turn it this way and look into it, it will show you your dreams.”
I love it too and all Jim Henson creations, though my favourite is The Dark Crystal, Labyrinth was also such a big influence in my childhood.
hahah I'm both Sarah and Jareth mix in the video hahah I know it's kind of odd hahah but you gotta work with what you have

It sounds amazing, I am not too familiar with the movie Labyrinth so I will check it out! Much love, hope you guys are doing well!

I grew up with Jim Henson movies (the creator of the muppets) and my favourite is The Dark Crystal but Labyrinth was also magical in my childhood years, cos I'm vintage hahah :) David Bowie and Trevor Jones made the soundtrack and well we all had a crush with the Goblin King back then. LOL, later in life I met quite a lot of the team involved in both movies, so yes I've met the designers and even the baby of Labyrinth in person.

Alright, now I am gonna have to watch it with the kids, I am convinced 😃

LOL, later in life I met quite a lot of the team involved in both movies, so yes I've met the designers and even the baby of Labyrinth in person.

That's pretty cool! How old was the baby now?

If the movie is 35 years, he might be 36. His name is Toby, just like in the movie :)
And it's a cool geek movie, my fav is The Dark Crystal but this was so special watched as a child too.

Labyrinth is one of my all time favorite movies and this is amazing and beautiful. You have a new fan!

My favourite fantasy movie is The Dark Crystal curiously by same director, Jim Henson. But Labyrinth is entwined deeply in my childhood memories. I like Bowie's underrated 80s era, Absolute Beginners, When the Wind Blows and of course Labyrinth.