Wednesday walk - Zagreb, capital that is both traditional and modern at the same time

Welcome to another #wednesdaywalk. This time I found myself in Zagreb, capital city of Croatia. Hope you enjoy the photos I took, and have a pleasant read.

Zagreb as we know it evolved from two medieval villages that flourished throughout the centuries on two nearby hills. Zagreb was first mentioned in writing in 1094, when a diocese was established on Kaptol, and neighboring Gradec was declared a free royal city in 1242. Both of these villages were fortified with substantial ramparts and towers, the vestiges of which may still be seen today.

I took the above photo on famous Jelačić square. It is dominated by the statue of Ban Josip Jelačić, lieutenant field marshal in a Imperial-Royal Army and politician, the Ban of Croatia , today facing south. When the statue was first placed on the square in 1866, it looked to the north, for the reason that at that time the southern part of the city did not yet exist, but it was still arable land and small rural dwellings. The statue looked out on the city center, St. Mark's Square.

Ilica is one of the longest (almost 6 kilometers long) and oldest streets in Zagreb. It stretches from Ban Jelačić Square in the east through Črnomerec in the west of the city, all the way to Vrapče and has more than 500 addresses. Ilica is also the main shopping street in the city center, where there are banks and shops of eminent world manufacturers of clothing and footwear.

The Ilica stream, which existed at the time, provided the inspiration for the street's name. Potters resided beside this stream, extracting clay from which they made pottery. Although there are various ideas concerning the name Ilica's origin, this one is the most accurate. Surprisingly, the name Ilica does not appear in any Croatian or neighboring city.

The Church of St. Mark is one of the oldest architectural monuments in the city of Zagreb, and is located on St. Mark's Square, as well as the Croatian Parliament. Church of St. Marko Evanđelista is a protected cultural asset of the Republic of Croatia. The church is covered with a colorful roof. A new roof structure was made for the sacristy. The south side of the roof is decorated with two coats of arms: the coat of arms of the Kingdom of Croatia, Slavonia and Dalmatia and the coat of arms of the city of Zagreb.

Petar Preradović Square in Zagreb, named after the great Petar Preradović, the Croatian poet. Among the people of Zagreb, it is generally known as Cvjetni Square, after the flower kiosks that are traditionally located there.

The square is located in the very center of the city, about 200 meters from Ban Jelačić Square. Today it is a pedestrian zone. There are benches, several trees, cafes with terraces. It is a favorite meeting place of Croatian celebrities.

The Cathedral of the Assumption of the Blessed Virgin Mary or the Zagreb Cathedral is the largest Croatian sacral building and one of the most valuable monuments of Croatian cultural heritage. It is the first and most important Gothic building in Croatia.

The top of the north tower of the Zagreb Cathedral, 13 and a half meters high and weighing 30 tons, was removed by a controlled explosion on April 17, 2020, due to the damage it suffered in a strong earthquake on March 22, there was a danger of it collapsing and causing even greater damage to the cathedral and the surrounding area. The cathedral was further damaged in the earthquake that occurred on December 29 with the epicenter near Petrinja.

Tkalčićeva Street, in the center of Zagreb, is a vibrant street full of cafes, restaurants and small shops. This time, we chose accommodation on this street, and we were not wrong. In 1840, the Croatian historian and priest Ivan Krstitelj Tkalčić was born, and in 1913 this street was named after him. Today, as we know, Tkalča is the most visited street in terms of tourism, where all generations gather. This street never sleeps.

I also had a drink in one of the cafes located in this street. This experience is quite charming and I want to recommend it to everyone that plan to visit this beautiful city.

The Art Pavilion in Zagreb is a representative exhibition space that has been proudly standing for 121 years. In the urban structure of the squares, from Zrinjevac to Tomislav Square, the Pavilion building occupied a leading position at the entrance to the city, and for those who arrive in Zagreb by train for the first time, it still represents the first encounter with the city. According to its architectural composition with a dominant dome and its purpose, it is a unique building in Croatia and is protected as a monument of the first kind. 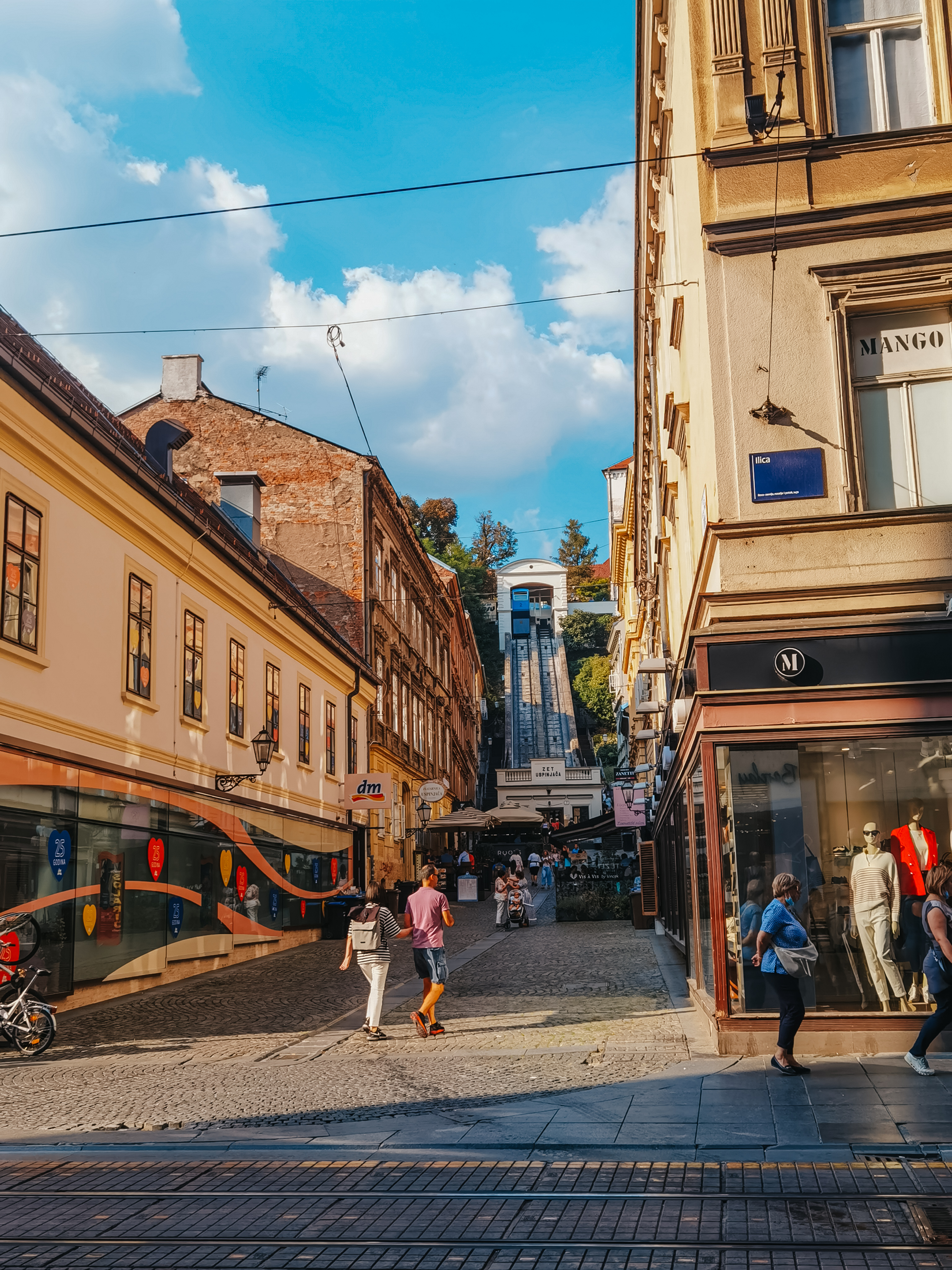 The Zagreb funicular is a funicular that connects Zagreb's Upper and Lower Towns. The lower station is located in Tomićeva Street (which leads to Ilica), and the upper station is located on Strossmayer promenade, at the foot of the Lotrščak tower. With a 66-meter long track, it is also known as the shortest cable railway in the world intended for public transport. It was officially put into operation on October 8, 1890, and began operations on April 23, 1893.

The stone gate is one of the best preserved monuments of old Zagreb. One of the symbols of the city, was saved from demolition by the efforts of the Society "Brothers of the Croatian Dragon", and today their seat is located in the historic hall upstairs. In the passage of the gate there is a chapel with the image of the Mother of God of the Stone Gate, the patron saint of the city.

Strossmayer promenade is the southern border of the Upper Town, which offers beautiful panoramas of the city of Zagreb. At the end of the 19th century, this 400-meter-long promenade was decorated with voluntary contributions from citizens, and was named after the bishop, educator, politician and the most influential figure on the social and political scene in Croatia - J. J. Strossmayer.

I should finish this wednesday walk with this beautiful picture of Zagreb roofs and a young moon above. Zagreb is a beautiful city, and I recommend it to everyone. I want to thank everyone who values my work. If you have any questions I would gladly answer them. Have a nice week and keep safe!

This is the first time I visited your blog. But. "I can officially say I'm in love with your photography":))
You live in a very beautiful place on the planet Earth, this is just a paradise for a photographer.
You have great photos. What camera and lens do you use?

I'm so happy to hear that. Im amateur at photography, every free time I have, I try to take photos. I use Nikon D5100 and it's kit lens, and whenever I don't have my camera, I use my phone Huawei P40 pro. Thank you once again for such kind words.

I think it makes sense for you to buy a more serious camera and lens. You are good at shooting, a keen eye and the right hands. It's time to expand your capabilities :)
!invest_vote

Thanks for joining Wednesday Walk :), I truly enjoy exploring the world virtually each Wednesday seeing walks from all around the globe and feeling I am there and experiencing it all myself, such as I did in your post just now :)
Do if you have time check out some of the other walk posts, its like a wee break from your day to day reality

Always grateful for your nice and kind words. I always love going back to Zagreb. There's something about that city.
I'll definitely check other walk posts! 🤗🤗

Congratulations @lensational! You have completed the following achievement on the Hive blockchain and have been rewarded with new badge(s) :

@lensasional, Hi friends, this is a very good post for wednesday walk. In addition to the beautiful photos, the history and cultural development of your narrative intrigues me. As if I wanted to be beside you to be there.