Since we last spoke, I've been quite busy, entrenching myself in the world of NFT art.

I've explained what that is before, but in case you missed it, here's a layman's quick summary...you know what a blockchain is , and you know what a cryptocurrency is. People figured out that they can attach a digital artwork to a blockchain as a "non fungible token" as thus the blockchain is witness to who created it, and how many were made and who owns them. Just like it knows who owns ETH. That's not a 100% accurate way of putting it but you get the idea.

It's damn ingenious and has essentially created a new art medium. And artists from all backgrounds, styles, techniques and genres are converging on it...at once. This is a once in a lifetime thing we are witnessing, creatives having the chance to pioneer a new medium. Like the invention of records, or radio, or film or television was to music and theater. It's amazing, it's exciting...and I have somehow found myself right in the think of it all.

This Thursday, in fact, on of the largest and best NFT art galleries. Makersplace, will have a featured drop of THREE of my new works. 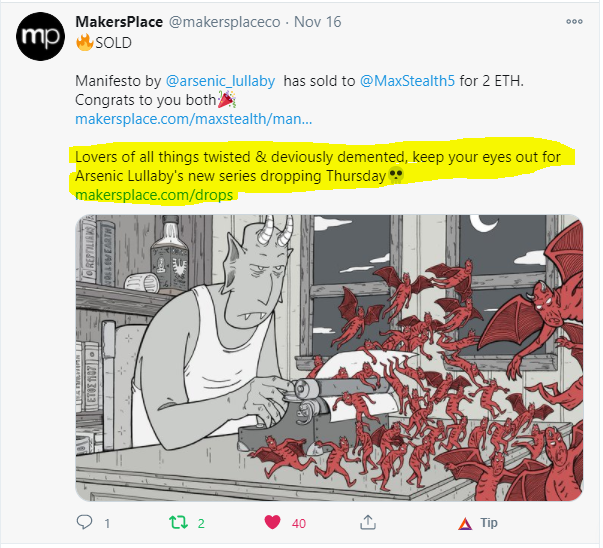 While they prefer I not reveal the full finished works, I can show you some glimpses and progress shots!

Let's start with "After Midnight" my rendition of Lon Cheney's character in the lost film "London After Midnight". I say "lost" because that's what it is. No known copy exists. There are only small clips, stills and posters as evidence that it ever existed. This'll be a gif with the main character standing in the fog mysterious and eerie. Which I felt would be a perfect spot to try a version of a Basil Wolverton type uneven grey background ...this illustration of his is what I mean... I don't know how large he drew, but I know how thick my brush strokes are, how long I can sustain a brush stroke and what a scanner is capable of picking up. So, I made the background layer roughly 9x7 inches. Which is a hell of a lot of brush strokes... As I look at it now....I am asking myself why I didn't just think to do a half of a page of them and copy and paste. shm. Let's just tell ourselves that somehow the subconscious of the viewer would notice.

Anyways...I was bright enough to just recreated several layers of it on the computer, instead of doing it three times. I at least figured that out.

Then I drew the character and different versions of moving elements. and....the finished work will be at this link on thurs...and there will only be 5 of these NFTs available...EVER.
https://makersplace.com/arseniclullaby/

The second piece is a Krampus illustration of mine, which technically seems like a seasonal thing, but to my mind frightened children about to meet a sorry fate at the hands of some monster is good year round. Here's the rough draft... and some finished inks... the full piece will be at this link thurs....I think there will be 7 of these...or was it 10? I think it was 7.
https://makersplace.com/arseniclullaby/

Last but not least is a gif of...well, I suppose a fictional ad for a Ouija board. This is on where my old school style really is well suited, just the correct amount of retro in the look to amplify how absurd the whole notion is. Every cell drawn by hand and inked with a brush, effects done digitally. I may be biased, but it's pretty damn good.

It'll be at this link on Thurs...and there will only be ONE available
https://makersplace.com/arseniclullaby/

BEFORE THEN...I will have an AMA session you can listen to on the Makersplace discord channel! and that's what I've been up to.

as always my home base is here
http://www.arseniclullabies.com/

I'm seeing a lot of talk about NFTs on Twitter, so I hope it is going well for the artists. I expect a lot of people will struggle to grasp the concept of limited edition digital art, but digital assets of various sorts already have a thriving market.

Good luck with your art.

The NFT artists are doing quite well. They put out good work, collectors spend ETH on it, the creatives then talk about ETH, crypto and blockchains to their combined hundreds of thousands of followers...everyone comes out ahead. Hey...HIVE should try that! Oh wait....they did and the Whales never showed up, and now HIVE is worth...waht? .15 cents? .12cents? smh
oh...am I repeating myself? I just thought I'd say it again in case they fork off into a THIRD attempt and maybe finally understand where their actual value lies.

Yeah, I get it that Hive is imperfect. It's got issues with trolls, greed and lack of coordination, but I still like it for the community spirit. I think it's worth persisting with, for me at least. For those trying to make a living online you have to go where it's most productive. I'll keep on doing what I can to make Hive more effective and maybe it will work out in the long run.

I'd love to get in on all this NFT goodness. I don't create much digital work but maybe it is time to try. I like the way you work with tradition mediums and then bring it to digital. Good luck with the sales.

Thanks! I'm still figuring out how to merge them. the whole things a lot of fun, and new enough that there is no telling who might stumble upon some great new technique!