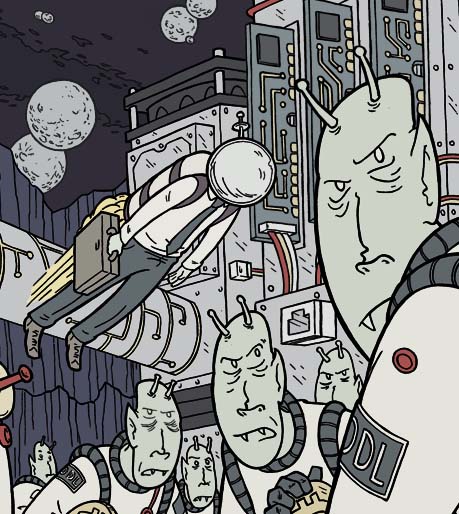 So....when we last left this project I was doing for Josh Blaylock ( https://www.comicboxels.com/ ) I had ALLLL the line work done, the title done and ready to color. 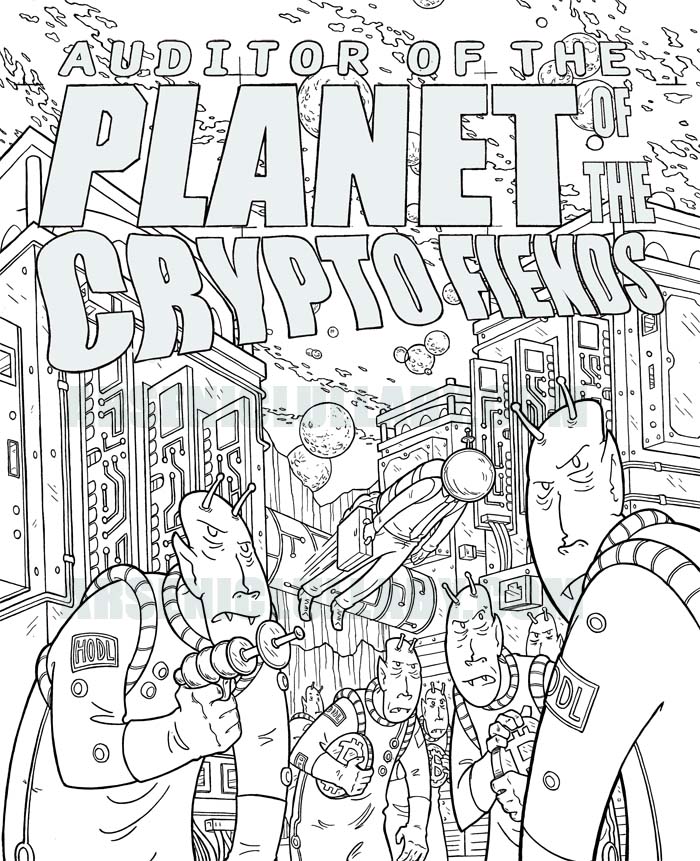 Intricate detailed linework being my hallmark, coloring always feels like a necessary evil, there's a give and take to things and the more the colors stand out...the less the linework stands out and visa versa. ALTHOUGH, as a gif I can do a little something about that usual balance. Let's first color it.

I initially had in mind an old pulp magazine type feel, and yet...a little modern color tone was worth experimenting with, particularly on the logo. After much mucking around and taking, what for ME, was a few risks and finally ended up with something I was happy with... 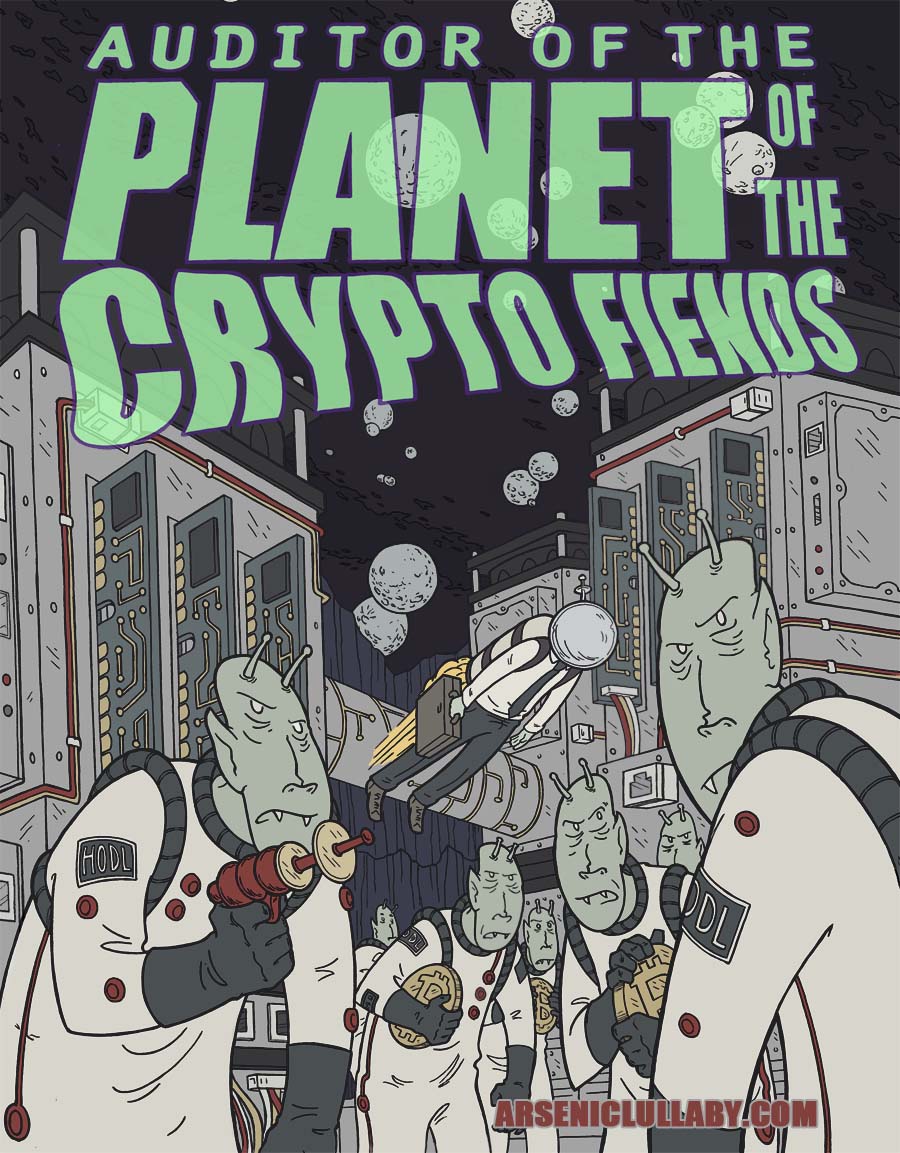 But so far...this could easily be a printed piece, not much about it takes advantage of the digital art possibilities of gif and the nft world. Not that you need to use more tools than you want. Plenty of really good nft work could also be printed. BUT I had a few things I wanted to try, and a few age old issues to see if I could solve.

There is of course the title, I knew what I wanted to do with that right from the beginning...

Something that vexes me a lot, is that because my work is usually pretty intricate, pretty...uhm...crowded? all encompassing? what's the term I'm looking for? There's a whole lot of detail to take in, that you really can't be confident people will notice. With some much going on visually it's easy for vital things to get lost or not be as striking as you want. In this case the little guy with the space helmet does get center stage in the composition, but there is so much detail everywhere he doesn't jump out as much as I'd like.

If this were in print, I could either just accept that or have less detail around him. But this being a fluid medium, I can tweak some things, give the piece a rhythm and have him be sure to get his warranted amount of attention. (give this a second or two while you're looking at it)

With that ability to tweak in mind I'm able to unchain from another element of standard composition. The center of the picture always gets some visual attention because it's in the center, there are all sorts of ways to make something that is not in the center the eye grabbing focus...but the perception of timing, as in what happens first, second, third is a bigger visual obstacle... the viewer is going so see a piece and view it from left to right, because they have, over the course of their entire lives, been reading from left to right (unless you're in Japan, but that's still the same issue just in reverse).

So using this as an example, 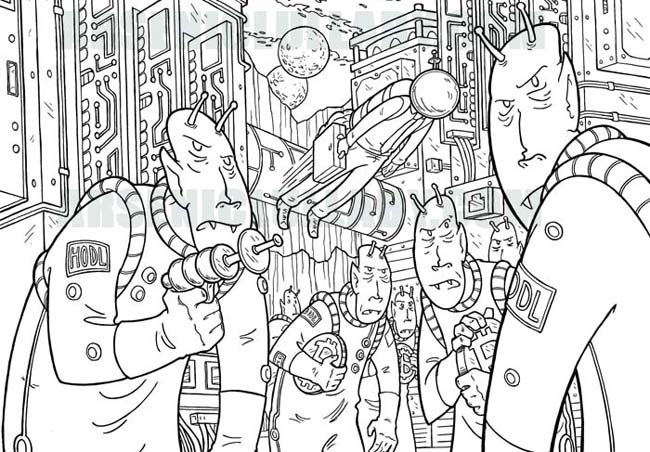 And, as in most cases, I'd like the eye to circle around instead of being lead off of the page/cover/piece in one direction or another.

So...I made some decisions on what order things should get some attention and the road map for tweaking was basically this... 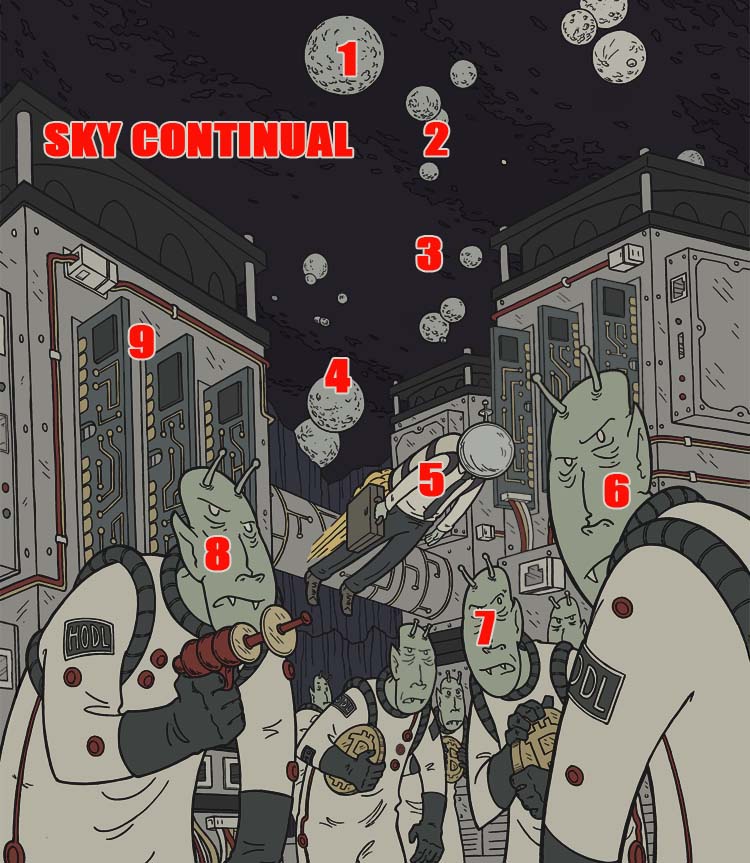 I'll show you first without the color so it's overly clear and obvious, instead of more subtle like in the final piece...

hmm...that's kinda cool just like that, now that I see it only black and white. I'm going remember this.

Anyways...each element fades in, gets crisper in a rhythm and order that I like. Basically leading the readers eye to all the elements I want so nothing gets left behind, yet nothing has to be at odds with anything else. It can be an overly detailed piece and still have things that stand out dramatically AND several things can stand out dramatically. The composition itself is ever changing because the visual focus is changing. Even the background structures gets a moment to shine

Fuck you, everything we know about standard composition!

Now that THAT is done an explained...how about heading over to http://comicboxels.com to see it in it's full sized glory! That's where Josh Blaylock's home base is and he is got a LOT of cool nft publishing stuff going on. A...LOT

But FIRST on his agenda is a NFT drop . Aside from myself and THIS fine piece, he, as well as two other comic book elder statesment- Howard Chaykin, and Bart Sears will have NFTs up!

AND...AANNNNDDDD...If you win my NFT, you get all the original physical art OR can tell me to burn it. as in actually burn it with actual fire. After 30 plus hours of working on it, it would bring me great delight to watch it burn.

This is insane cool! :)
comicboxels = wow! All the very best!

The detail on this is insane and I love your explanations. That background adds to the experience. Hope this does really well for you. You deserve it.

Thanks!! i was concerned there was too much detail to the point it'd be visually muddy but it turned out alright

$0.20
1 vote
Reply
[-]
poshtoken (77) last year
The rewards earned on this comment will go directly to the person sharing the post on Twitter as long as they are registered with @poshtoken. Sign up at https://hiveposh.com.
$0.00
Reply