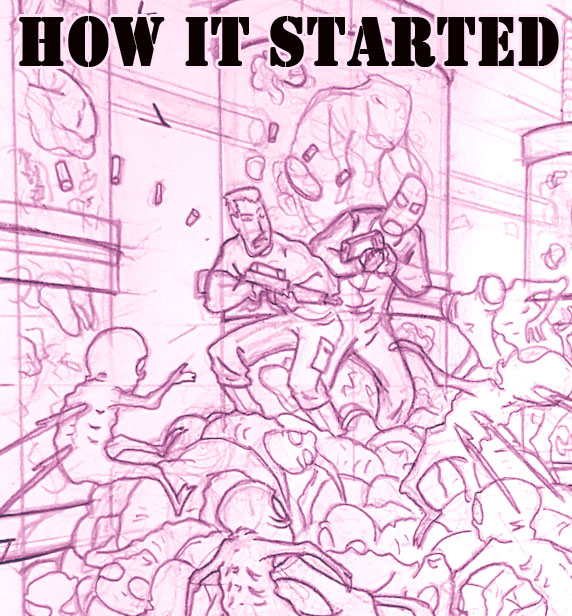 When last we spoke I showed you some start to finish illustrating on a secret project I've been working on.

Should be able to give you more details pretty soon, but for now the guideline I've been given as far as what I can show online is - don't show too much, don't show all of the main characters.

That's pretty vague...vague enough to show you damn near everything on each illustration....so...let's dig into the drawing up of pin up/ splash page no2 of 3

Another fairly standard layout, the heroes fighting waves of enemies, so much so that they are standing on the bodies of the waves they have already "dispatched". 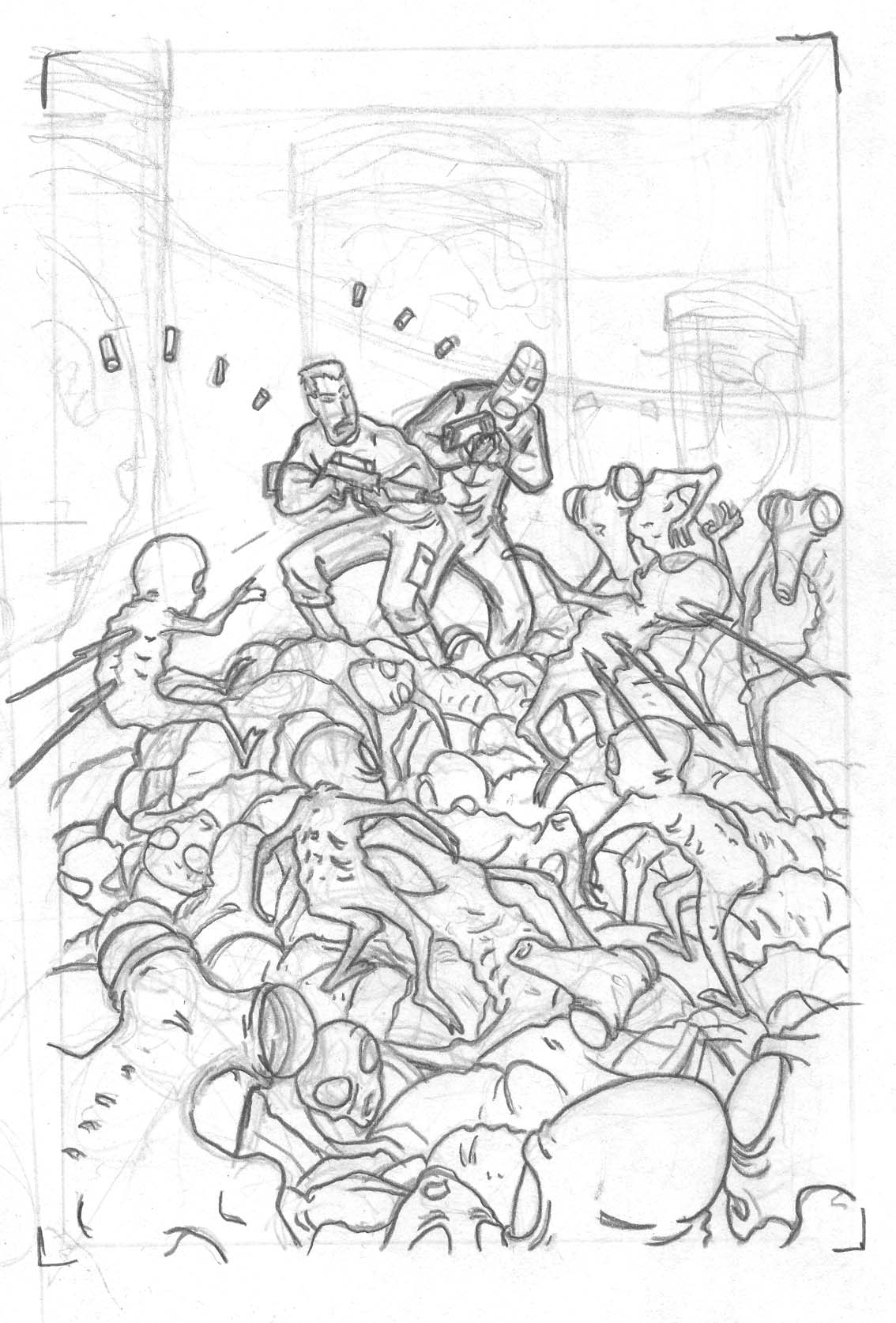 I toyed with the idea of no background on this, but couldn't bring myself to leave it that way and added some sci-fi containment tubes of some sort. Planned on having body parts of earth people or animals, but then though to myself "meh...I'll just let the colorist make some weird glowing liquid in there." 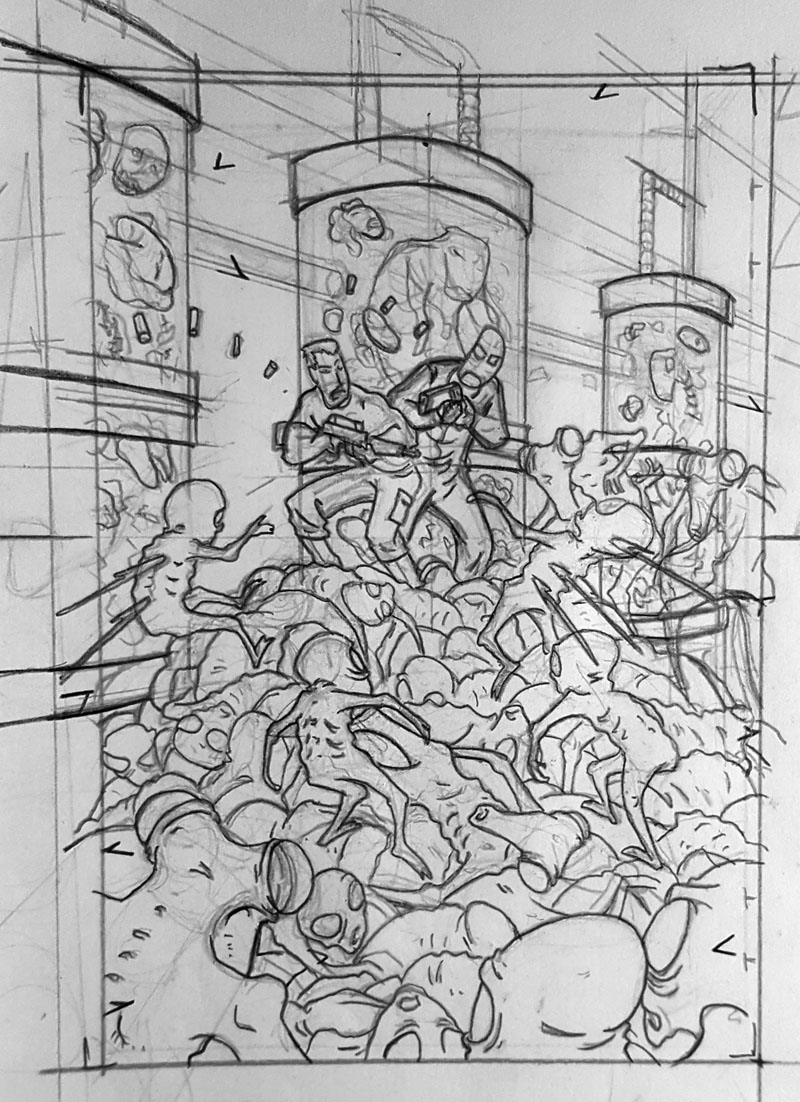 Also, at this point wasn't totally sure what the characters would be wearing at this stage in the story so I just penciled the bugger with empty tubes and no central figures..for the sake of continuing to move forward. He we go with the final penciled version.

The sketches are usually 4x6 inches or close to it, the final piece is 11x17 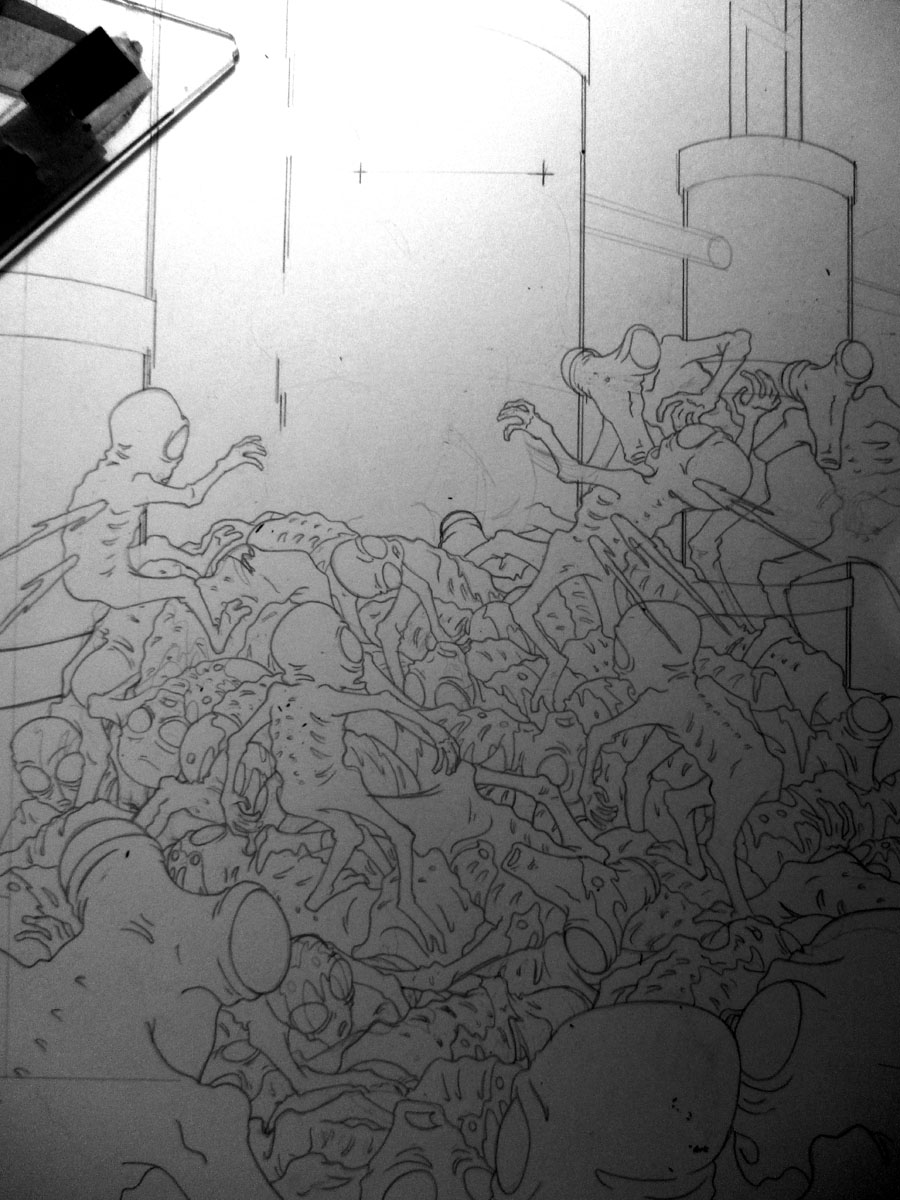 Pretty okay, nice to do one that doesn't have all sorts of complicated stuff in the background or need any tricky vanishing point techniques. Going to be a bit of a challenge to ink. Onto that... 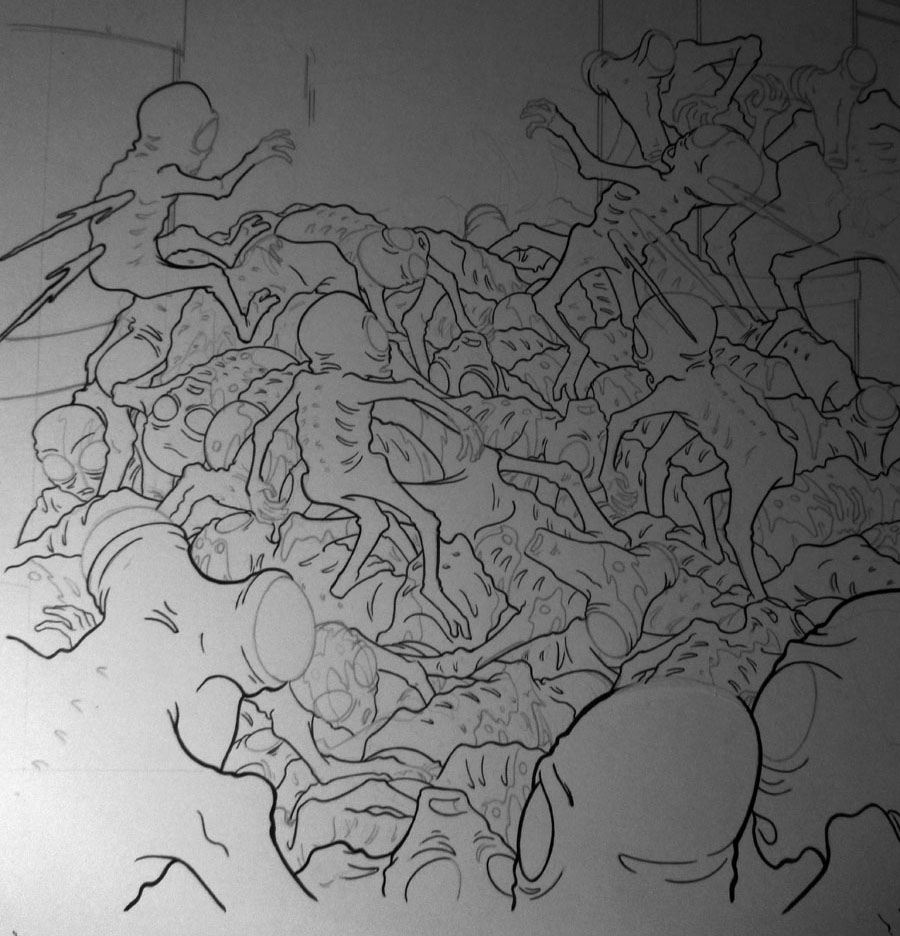 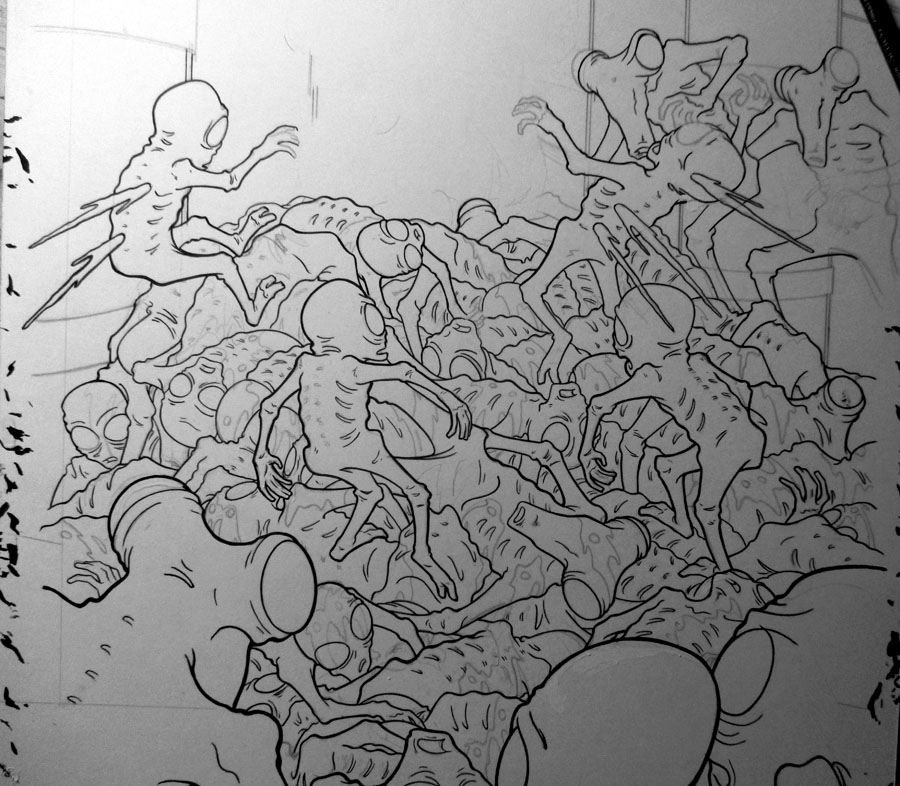 At this point I was pretty sick of inking and decided to back up and add those figures. Got a little direction on what they'd be wearing...and off I went. 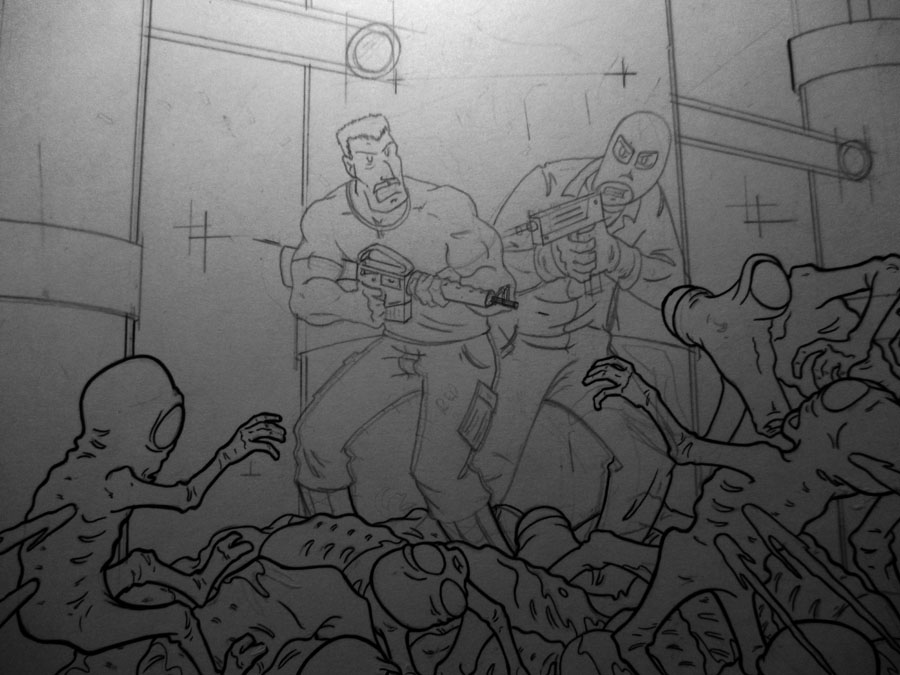 It's a good thing I didn't go to much farther with the ink because as I add these I'm seeing that I may want to white out that aliens hand and move it a bit. I dunno...sometimes it helps to ink the things furthest away so you can make sure the line widths are giving it some depth and it's not just a visual bowl of black ramen noodles. 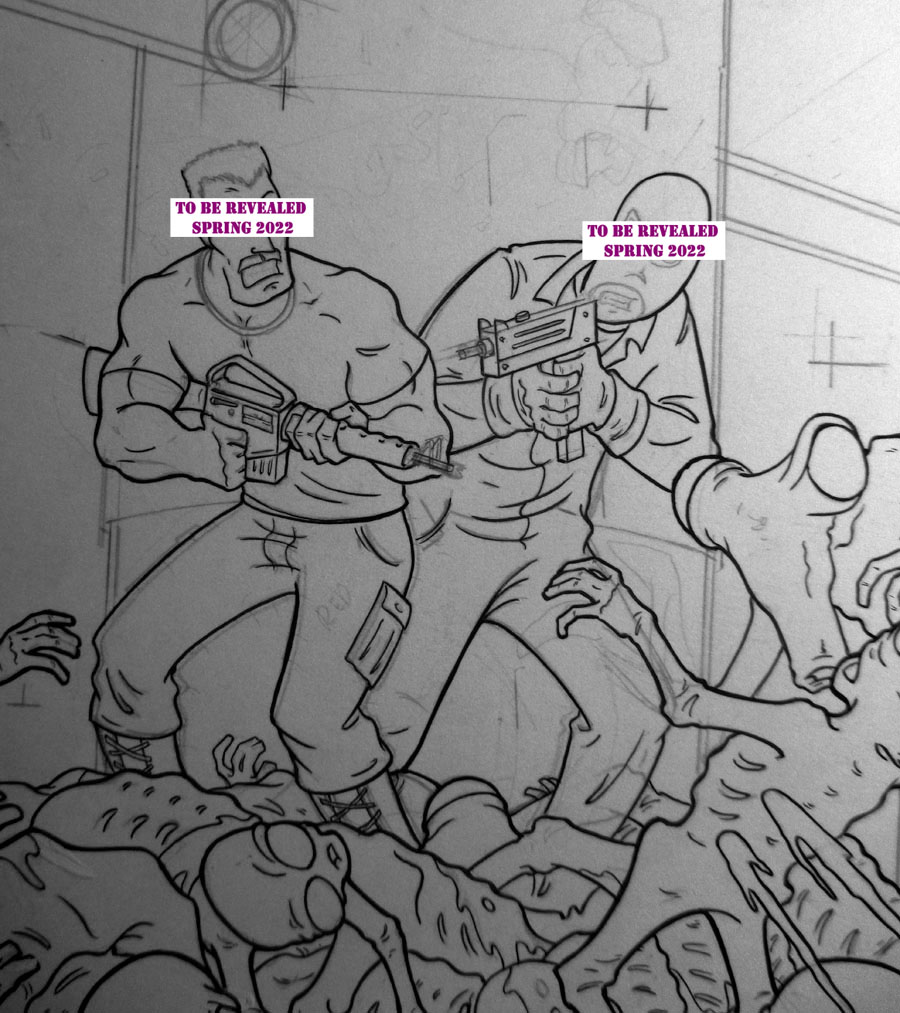 The man in charge was very particular about the weapons looking like actual weapons and not just cartoon symbols of guns , to help set the story in it's own reality of the 90s. It's a grey area ,that you just kind of know instinctively, of how much detail and reality is required to make the difference between a cartoon and a story happening in a cartoon world. That's a confusing way of putting it...let me try again...the difference between something illustrated in a cartoon style and a cartoon? That's just as nonsensical.

...we want it to feel like a version of the actual world, not a cartoon...

ANYWAYS, I was pleased with how the M16 and the Mac10 turned out (those are super 90s action hero type weapons). I finished the rest and sent the illustration over. 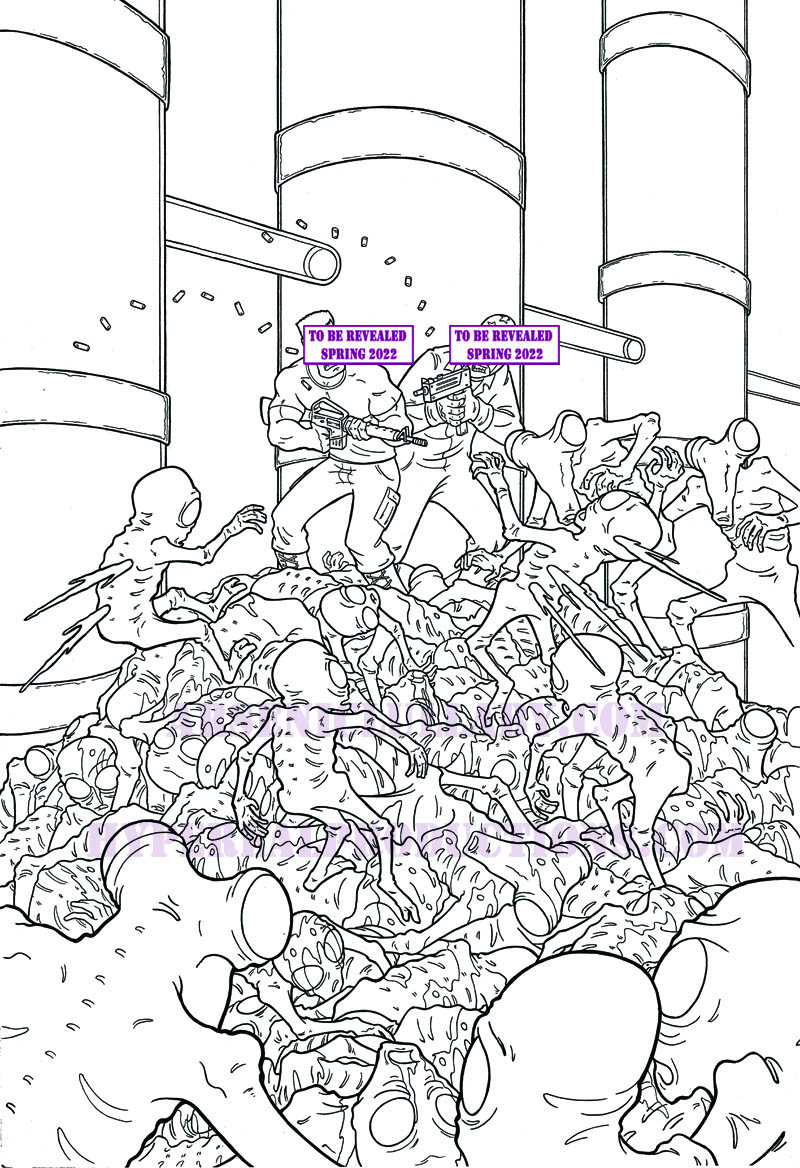 He liked it...and asked when I was adding body parts into the tubes.

I realized then, that I should have erased all of that stuff in the tubes before sending the sketch over for approval. Now I'm stuck drawing body parts in the tubes. I did this to myself, you see. If I have just sent the sketch with empty tubes I guarantee that would have went over fine, and no one would have said "put something in the tubes"...hell, they might have just assumed the tubes where pillars or something. For that matter I should have just left the background blank.

But you send a sketch with a bunch a extras in there and then you're stuck doing it. Okay...fine...at least this will make the colorist's life a bit more difficult LOL

Let's draw some misc. body parts...where tf is that original sketch...I'm just gonna draw them in there better and blow it up, and trace them into the tubes with a light table and get back to inking... 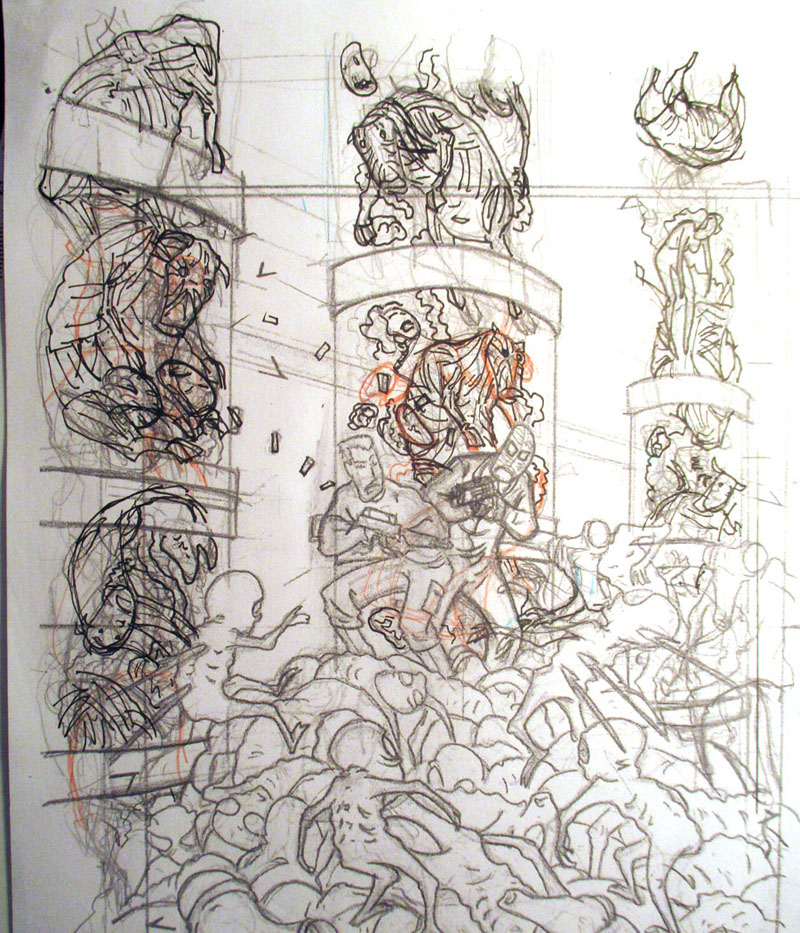 That...is a mess. Okay, maybe I'll blow it up and rearrange things a bit. Have a nice clear drawing to move around.. 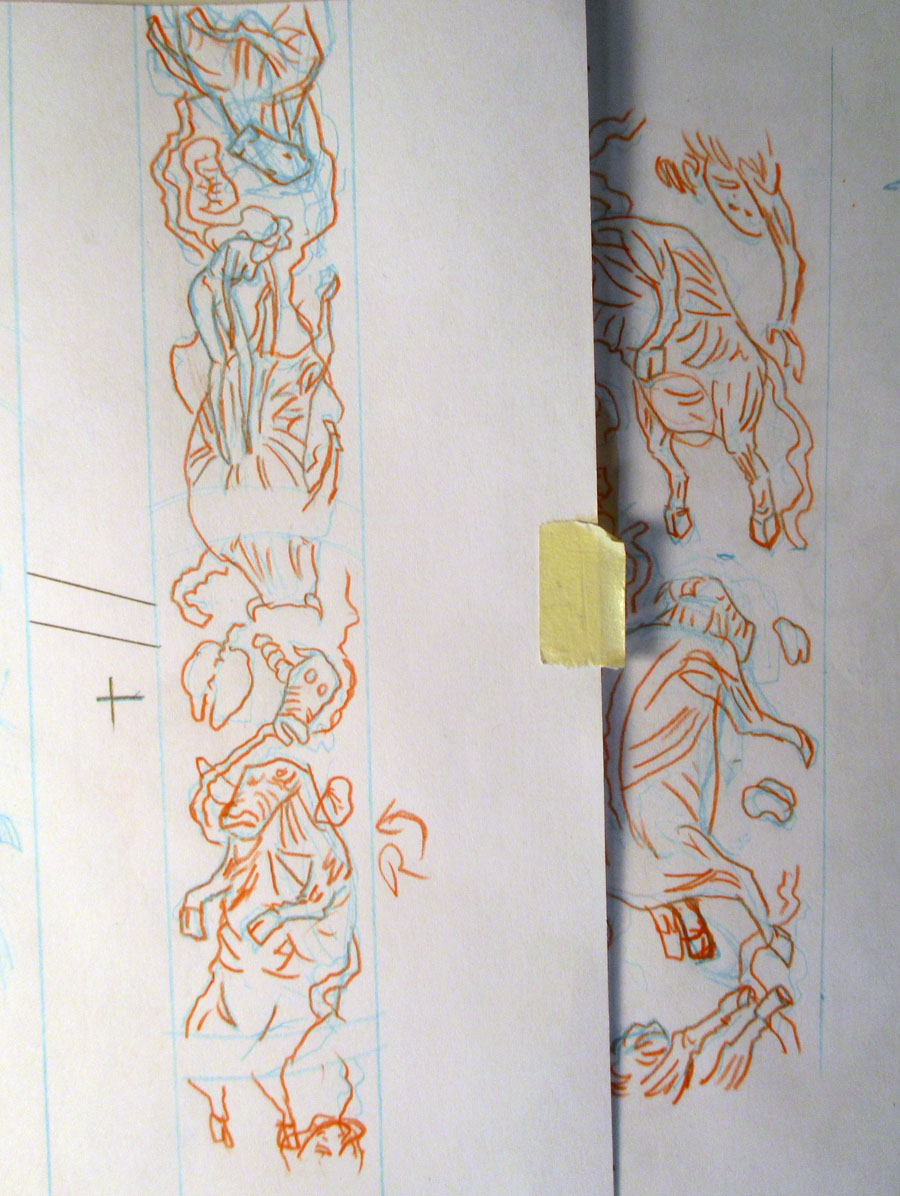 What TF am I doing??? Rearranging floating guts and skinned animals in tubes, in the background. This is way past the line of madness now. This is like making sure all the buttons on a telephone are in proper perspective or crap like that. I'm just gonna draw the crap in there and get this over with. Although...I probably should move something around to cover up the floating woman's private parts.

You know what? NO...no I will not! I am going to draw that tiny cartoon vagina and let them figure out how to cover it up because this is taking way more time than it should because...because THEY expected me to... draw... all the stuff I had on the sketch, even though I didn't mean to...?

Somehow, I am the one being wronged here. I just have to use more circular logic to rationalize that. and I will, SO the cartoon vagina stays! 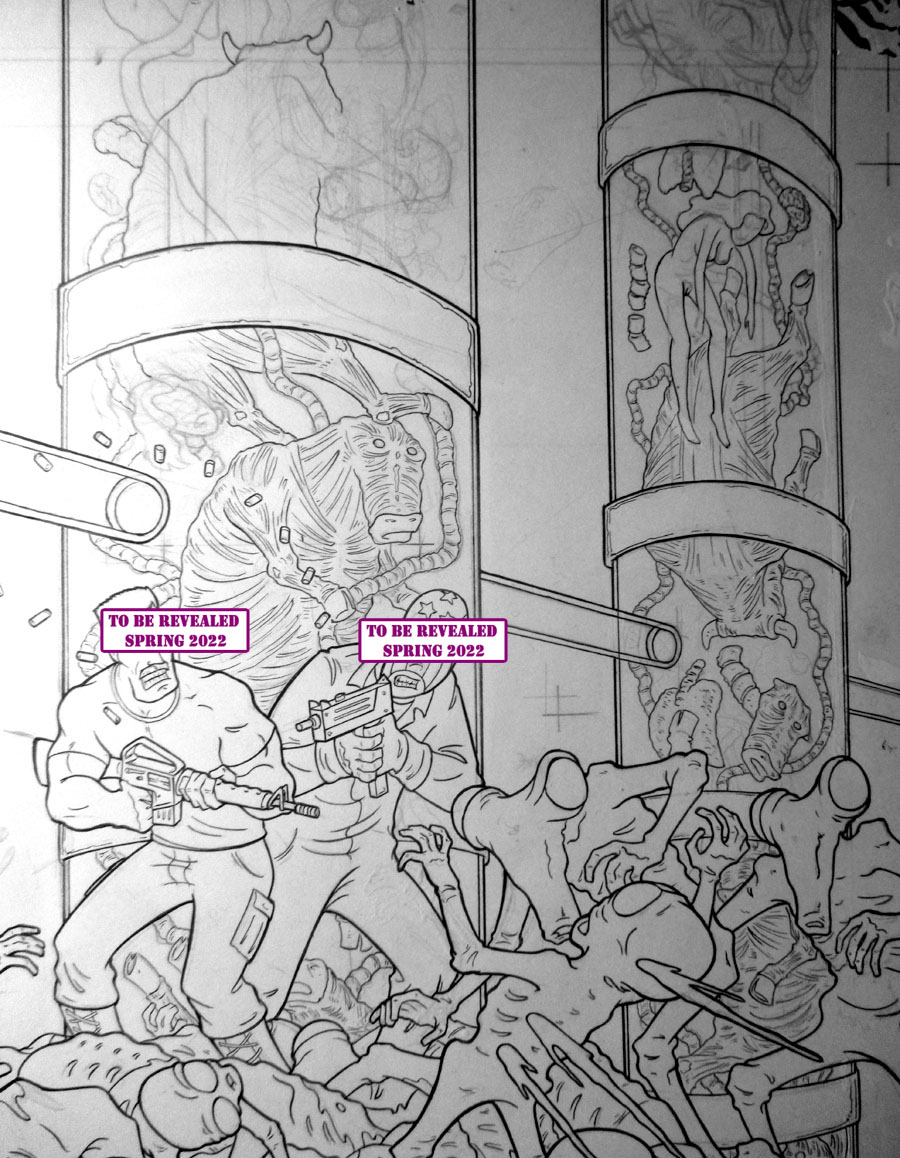 That's not a great cartoon vagina if I'm being honest. Compared to the detail and precision on the guns, it's just sorta...okay. I can defiantly do better than that. wouldn't take much to white that out and try again. Although inking over white out is a little tricky and....what am I talking about? I'm concerned about the level of quality of a cartoon vagina I put in just to be juvenile.

That's enough, let's just ink the rest and be done with it. 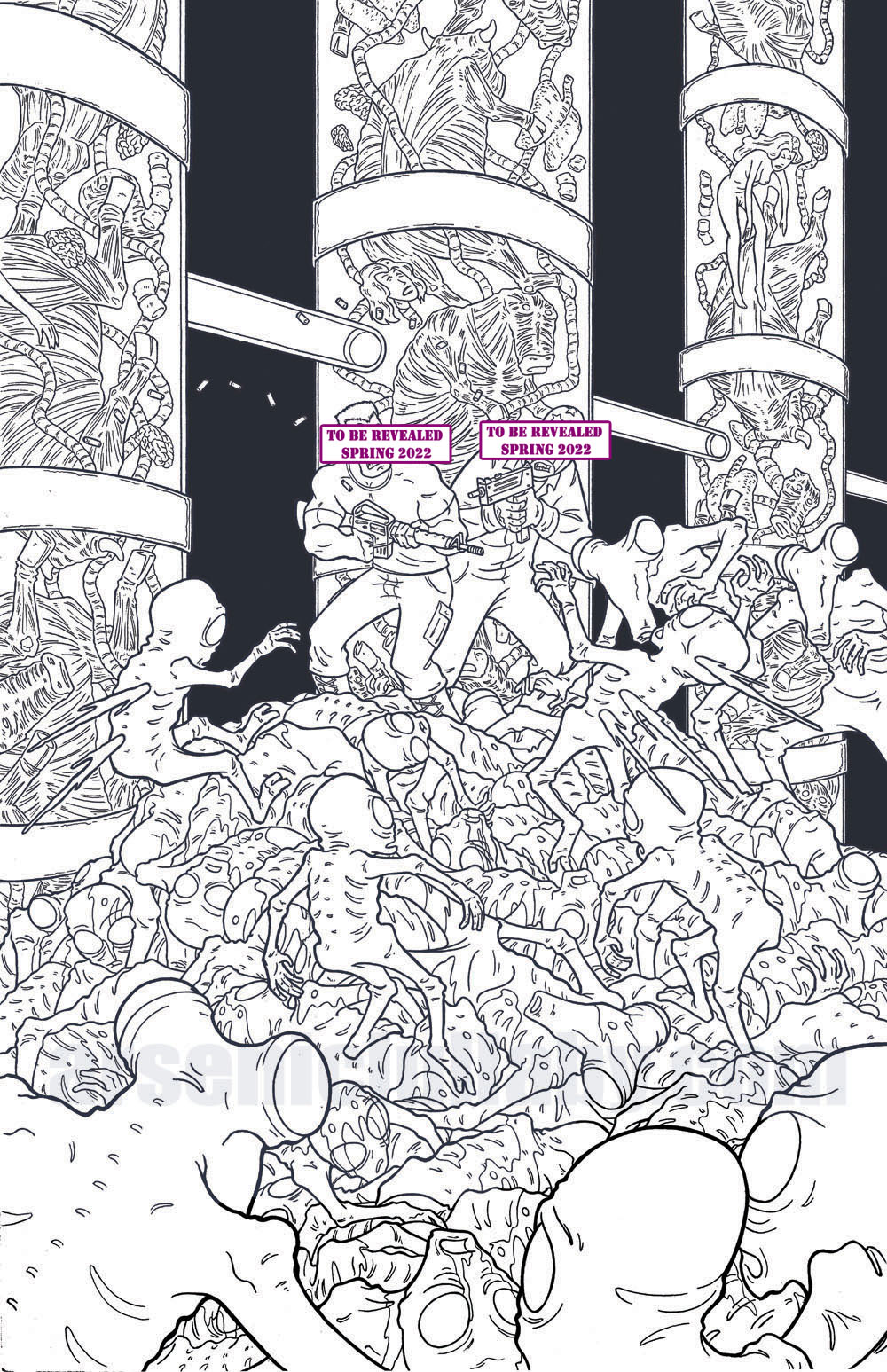 Okay...looks pretty good AND should be a real nightmare to color, which is not my job this time. ha!
Good luck Don, hope you have as much fun as I did LOL.

On a side note, I did move the alien hand/arm. Not sure how much of a difference it made, but I feel better about it. 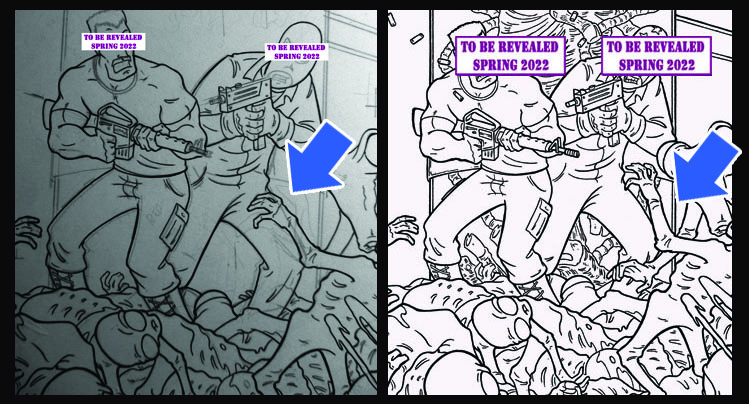 That's all for today. Next time I'll show you the one that really made my eyes bleed...

As always, home base is here

Oops, out of beer. Have some !LUV instead.

Thanks! I'm happy with either one haha

That cartoon vagina really brings the piece together. 🤣

you do what you can to make the job fun, y'know?

A little less perspective may have made it easier, but did you trace there the bullets would rip through the aliens? The colouring guy will have fun with all those bodies. Do you give them any tips on what the colours should be?

$0.00
Reply
[-]
poshtoken (74) 3 months ago
The rewards earned on this comment will go directly to the person sharing the post on Twitter as long as they are registered with @poshtoken. Sign up at https://hiveposh.com.
$0.00
Reply