stayoutoftherz (75)in The Chess Community • 8 months ago (edited)

In last year still, the prices and payouts from S9 were sent to to all eligible players.
In total 165 Hive and 220 HBD were distributed among 34 participants (in S8 it was 22 players "only"), plus a unique NFT trophy!

Thanks again to all the Upvoters and Supporters!

🏆 Here is the payout table of Season 9 🏆

The Hivechess Hall of Fame:

After the small break the anniversary Season 10 will start this Friday 14th Jan, 20h GMTat the usual time! It will go - no surprise - over 10 rounds. The points for each round are again distributed via the "Lighteye system", explained here and which was now adopted by the CBL as well!

There are a few changes this time! The percentage of post rewards feeding the price pool will go down from 90% to 80% (as the amount of work for me is ever increasing (I just say NFT & performance calculation)). But 80% of total post rewards is still good - some other tournaments pay out 50% (the liquid rewards only). Both the calculation and transparency of the price pool will be greatly improved by putting the @badge-646464 account as 80% beneficiary of the Hivechess-related posts, so you can anytime check the size of the pricepool for yourself here. All what is there, goes to the S10 prices! You will notice, that it is already >0 as in my 2 last chess-related posts I had put @badge-646464 already as beneficiary. Likewise I also encourage any tournament or streaming report to set @badge-646464 as 5 or 10% beneficiary, because it is the tournament who made the report possible in first place, right? By this I hope the prices can get even more attractive for all!

The prices will be payed out in liquid Hive again (not in Hive + HBD, this was too cumbersome). To counteract any big shifts in the Hive/HBD ratio, I will timely convert the HBD to Hive on the internal market. Any curation rewards of @badge-646464 will of course also go to the price pool! At the end of the season I pay the prices from my pocket and will power down that wallet. As a heads up, for S11 it will be a new account, @chesspricepool who will start from 0 (otherwise the calculation will get messy during the power down). Sounds complicated? It is easier than how I have calculated the prices so far (checking out each post reward individually, converting HBD to Hive, etc.)

I will continue to track each players performance, but I won´t show anymore the points given in each round - it made the ranking table unnecessary large and I think is was not worth it. Instead at the end of the season I will share the Excel sheet for reference, like before.
The season winner will in addition get a unique NFT again, but the special prices will be slightly lower this time. Any idea of motives for the NFT trophy are again welcome. Please share this announcement among your (chess) friends and colleagues!
The more participate, the more fun! And maybe some are even interested to join Hive and it´s Chess Community?

See you tomorrow and good luck to all!

Since @theycallmedan in his Ragnarok AMA reflection post mentioned that he loves chess since childhood, I mention him as well (hoping that he might support the Hivechess pricepool too with some occasional upvotes). For all who are not aware, the upcoming epic NFT battle game RAGNAROK (more info at @ragnarok.game) will also have chess elements!

I have noticed that on the Hive-Engine someone has created a CHESS token via a @chesstoken account. Any clue what is the idea behind it? Because I am also speculating about a CHESS token by myself. One could pay out prices in CHESS tokens but also ask for a registration fee in CHESS tokens. There could be raffles, bets (who will win S10?) etc. Lots of things to consider, and I don´t want to duplicate efforts.

Finally, just as a reminder, every SATURDAY the Blitz tournament organized by @schamangerbet is open to participation here,
every SUNDAY the one organized by @chessbrotherspro you can join here! Both run on https://lichess.org/,
and every MONDAY the Checkmate Coin Tournaments from @hive-129589 and @giacomone start, read more about them here.

This is beautiful @stayoutoftherz . I would even agree that it goes down to 70% instead. The work you put into this is amazing!

Likewise I also encourage any tournament or streaming report to set @badge-646464 as 5 or 10% beneficiary, because it is the tournament who made the report possible in first place, right?

Yes this is true, I like the 10% beneficiary idea.. I would use it in all my chess related contents. I'm happy i can add to the prizes because i get alot ot support too on my contents

Since @theycallmedan in his Ragnarok AMA reflection post mentioned that he loves chess since childhood, I mention him as well (hoping that he might support the Hivechess pricepool too with some occasional upvotes).

I get his support sometimes... And I'm a big fan of @ragnarok.game.

I have noticed that on the Hive-Engine someone has created a CHESS token via a @chesstoken account.

@wildthougts & i recently discussed something like this, i believe it is a great idea but i think it is best to keep it on hold for now.. maybe till we have more active Hivechess accounts here.

See you tomorrow and good luck to all!

Goodluck to you too! You've been Excellent!

I like the 10% beneficiary idea.. I would use it in all my chess related
contents.

That would be awesome if you can do that!!💪

Hey very interesting to have an exclusive account for the rewards that make it easier in termns of calculations, in the Chess Brothers tournament we plan to include a table with all the links to the reports in each call post to track the payouts, maybe we will consider having an account as a beneficiary in the future.

On the other hand, I understand you perfectly, the @chessbrotherspro´s posts and all the calculation of the scores is bloody exhausting, not to mention that all the earnings are split between @eniolw, @sawko and other friends who help us with the design of the posters and video editing so the profit we get for all this is very low, we would really like to offer higher rewards to the players, hopefully in the future we can reach more sponsors and with this the winning ratio is higher for the chess players hivers. Every day we work hard on improving the game conditions and I think we all are doing awesome so far, the chess community is growing and every time we see new chess players that join us on this journey.

great report, I will try to stream the tournament 🙌👍

It is indeed growing, I am wondering if Ragnarok will contribute to it 😄, but jokes aside we are really on a great path, thanks to you too!!

Actually, It is the ideal time for all of us to put our efforts together and promote even more the game of chess here on hive.
Ragnarok looks good, it wouldn't be a bad idea to post some gameplay here on The chess community when the game is available.

Excellent, unfortunately last season I didn't have much time, I'll be back tomorrow 💪.

Great, then @tungphong will have another challenger!

yeah! i miss sawko, welcome back our great champion

The points for each round are again distributed via the "Lighteye system", explained here and which was now adopted by the CBL as well!

Thank you very much, you were the first to implement it.

Great! What´s your name on Lichess?

I don't have an account in lichess, in a couple of minutes I will create one and the name I think will be the same as my user in Hive. Thanks!

Got you! Good luck!

Thanks for all of your efforts @stayoutoftherz for putting these together, running them and improving the chess community as a whole by increasing interest.
!PIZZA
!BEER

Very welcome. I hope to see you more often on the board despite you are a tough opponent :)

Yeah we've had some tough matches haha sadly the timing of a lot of these is tough for me to make but hopefully can make more in the future.

@zacherybinx, sorry! You need more to stake more $PIZZA to use this command.

what is your Lichess username?

No worries, it will better (and next time there is a less fast time control).
But you played only 2 games, so this round is not counted for you (you need to play at least 3 games, as per the rules).

Oh, you should have been on that list already. Added you.
What is the announcement post of your tournament?

@stayoutoftherz This is the announcement post of CHECKMATE COIN ARENA TOURNAMENTS
Tonight I'll participate in your tournament, my friend @petreius can't participate due to a meeting. He's sorry, next time he'll participate too!

Last season, I didn't play but this season I will try to play every time. It will be a challenge for me with the timezones and all. But I will try my best.

Can you add me to the tournament. My lichess id is 'pravesh007'

Great, you are added!

Let's go!!! Glad the season is here. Been looking forward to it since I joined Hive.

Because I am also speculating about a CHESS token by myself.

Same here! I think it's about time the chess community had a chess token.

I am just returning to the hive community and I would love to take part in the tournament @stayoutoftherz my lichess username is perpz. Pls register me for d tournament

Awesome! You are registered. Good luck!

Hi, my username and lichess id is the same @alexmag1988

Hi add me to the tournament.
my username is - @salomijale
Lichess name is - summisimeon

Looking forward to some strong chess 💪 this season!

Thank you very much for the invitation.

Ok I'm processing all the new information, I finished reading @chessbrotherspro conditions and now yours @stayoutoftherz and I'm 🥴 hahahaha anyway if we have any doubts, clarify us right?

Sure, the most important is to play, the rest will follow :)

Hi add me to the tournament.
my username is - @ibizaki
Lichess name is - JasonRoig

You are added, good luck!

Tahnk you very much. Have a good day.

Yes, but they add an element of luck. Already the pairing often is lucky or unlucky and I try to avoid additional gambling. Why 2 victories should count less just because there is e.g. a draw in between? 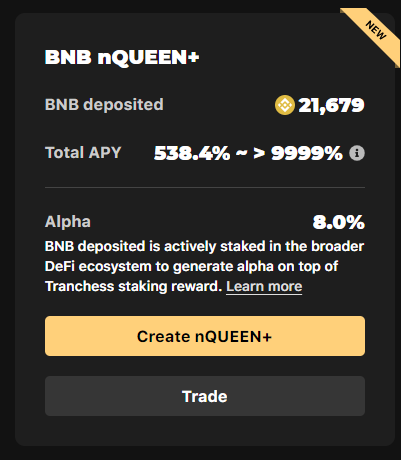 Chance of life or best prepared scam ever :)?

I would keep my fingers off, 538% APY is completely unrealistic. From where should that money come from?