Mauritius - The home of the lighthouse keeper at Albion Lighthouse 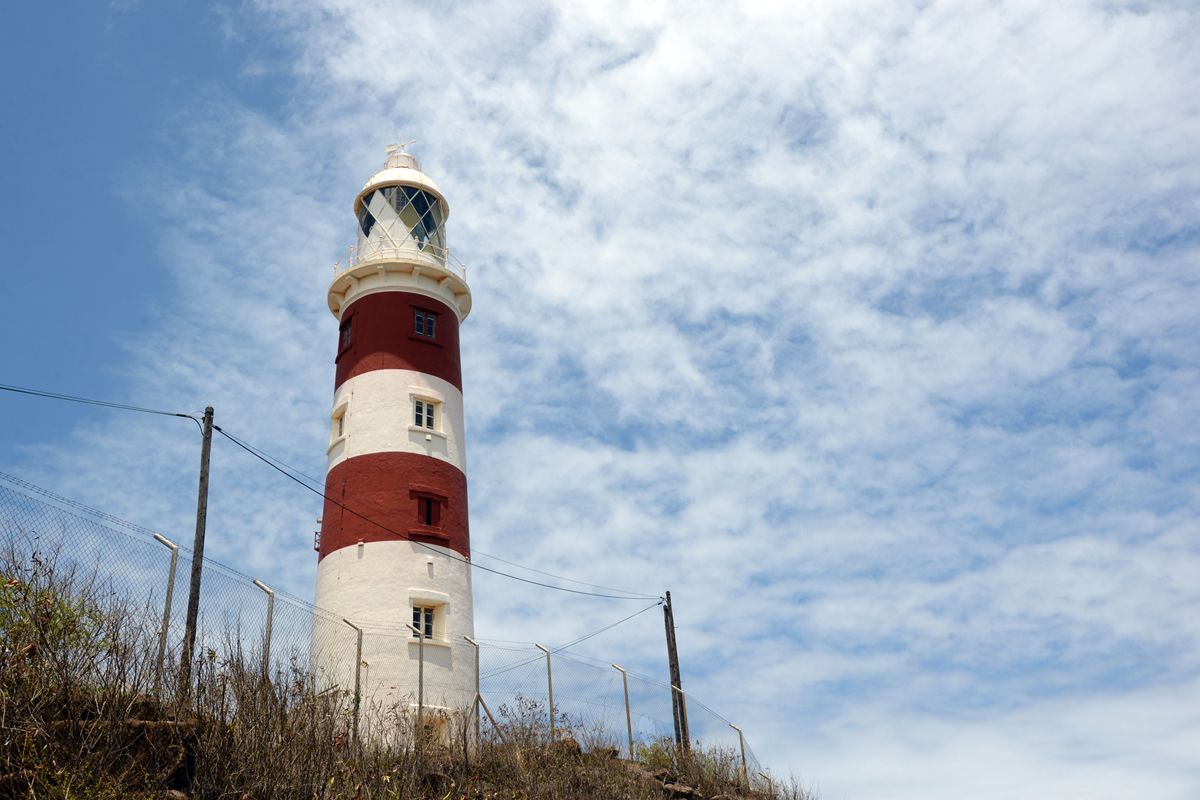 When I took my travel companions to Albion on the west coast of Mauritius a couple of weeks ago, the plan was to explore a specific abandoned building. The ruins of the Bergeraz hotel built in 1975. According to an article in the Mauritian newspapers L'express the former hotel belongs on a list of haunted houses on the island. We didn't see these ruins, because they no longer exists. Instead we got to see what is left of the lighthouse keeper's home. We chose to make our first stop at the Albion Lighthouse, because the ruins of the hotel was supposed to be located at the same place as the lighthouse – on top of the Pointe-aux- Caves Cliff. The lighthouse is still standing on the edge of the cliff guiding the ships safely on the way to the harbour in Port Louis. It's still operational, but automated, so the lighthouse keeper has left his home long time ago. 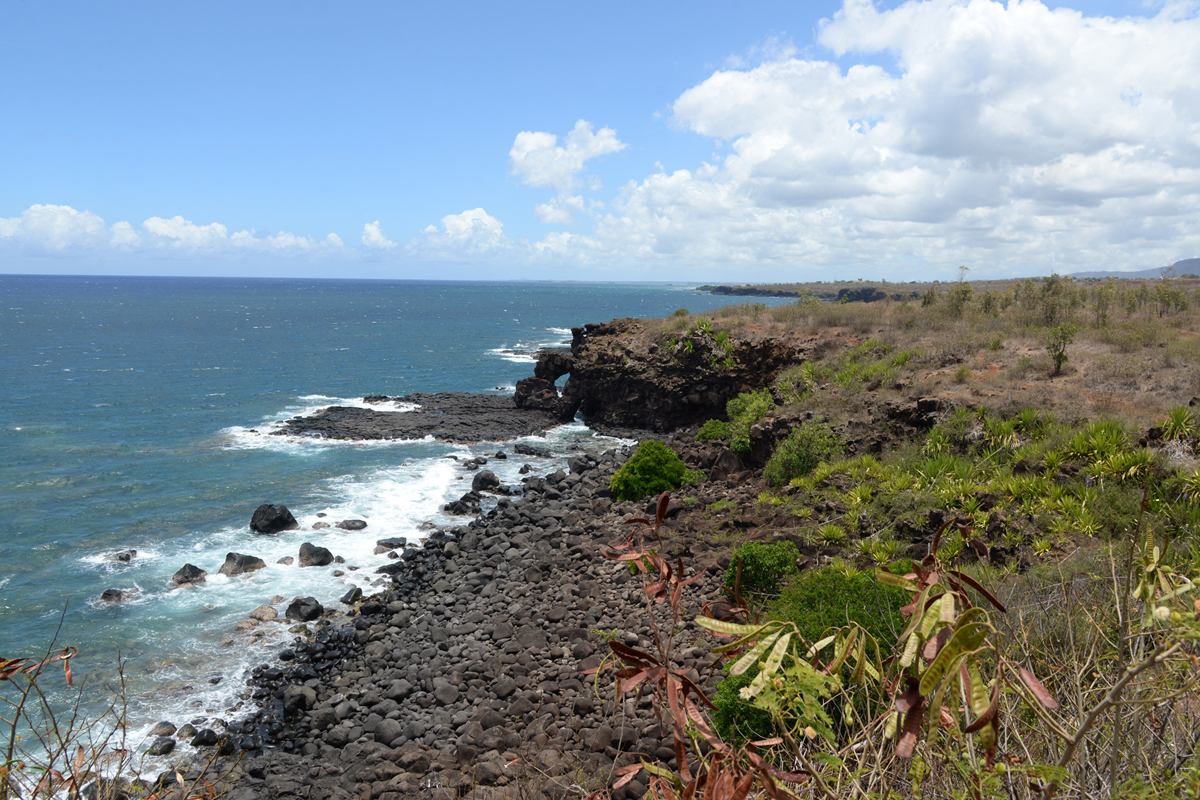 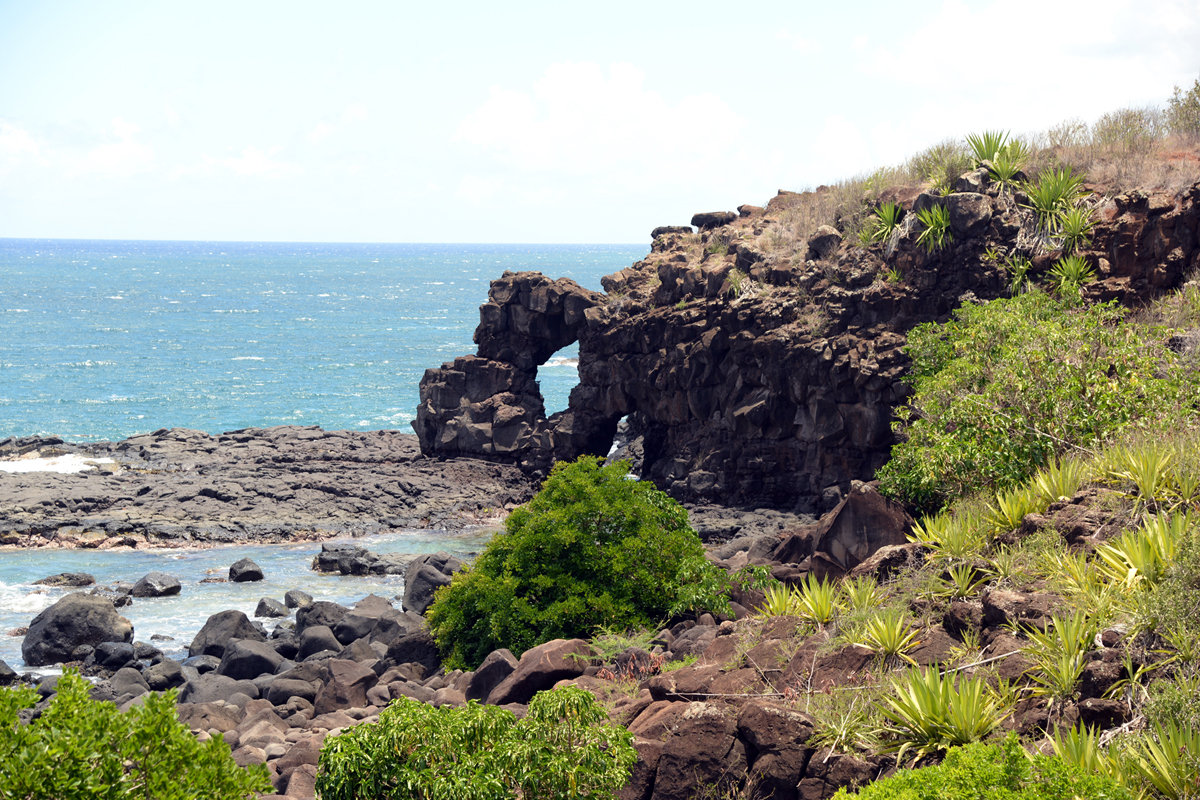 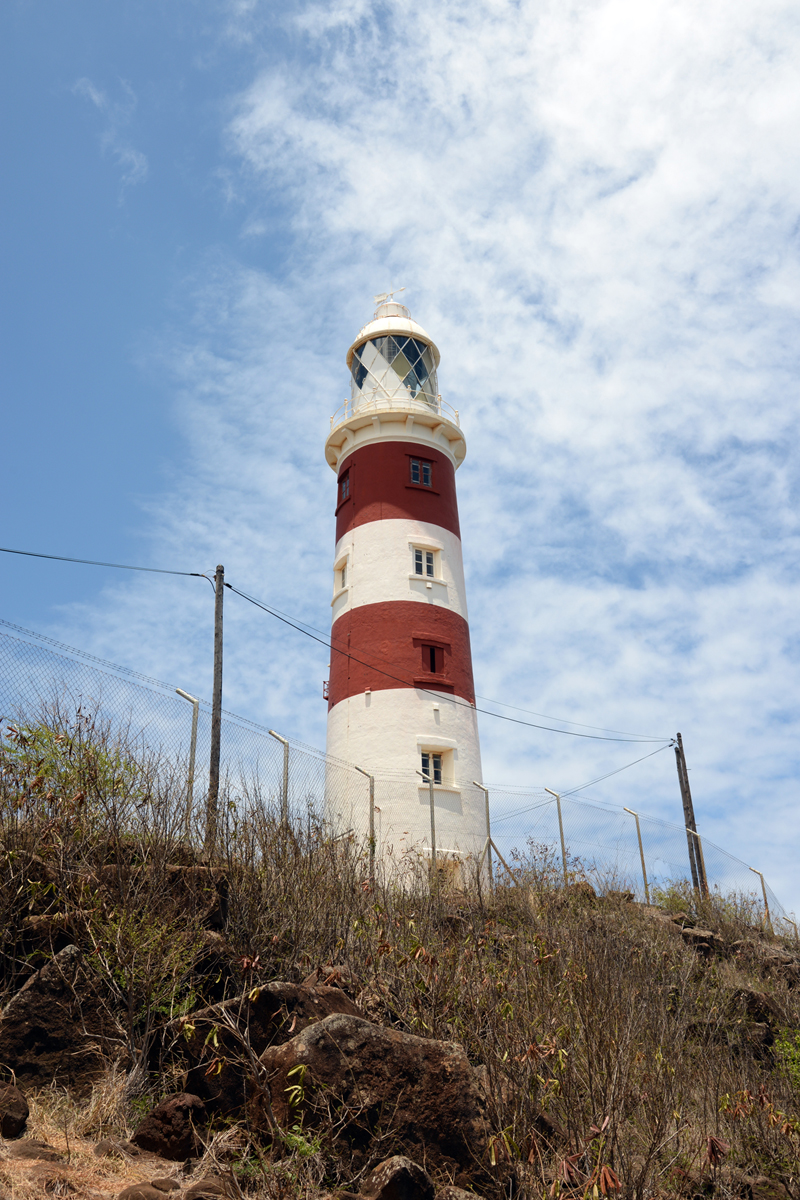 When we arrived at the gate, it was closed and no one was here. We took a walk out onto the cliff to look at the rugged coast and the lighthouse from here. The coast here is quite rough. If you go down to the sea, you will find caves in the mountainside and small, natural pools. Many locals find their way down here. When we returned to our car, a man had a arrived. He told us that the lighthouse is closed right noe. We should have been part of an organized tour group, with an authorization to be allowed into the lighthouse. But he was kind enough to allow us inside to take pictures of the lighthouse and the house that used to belong to the lighthouse keeper. 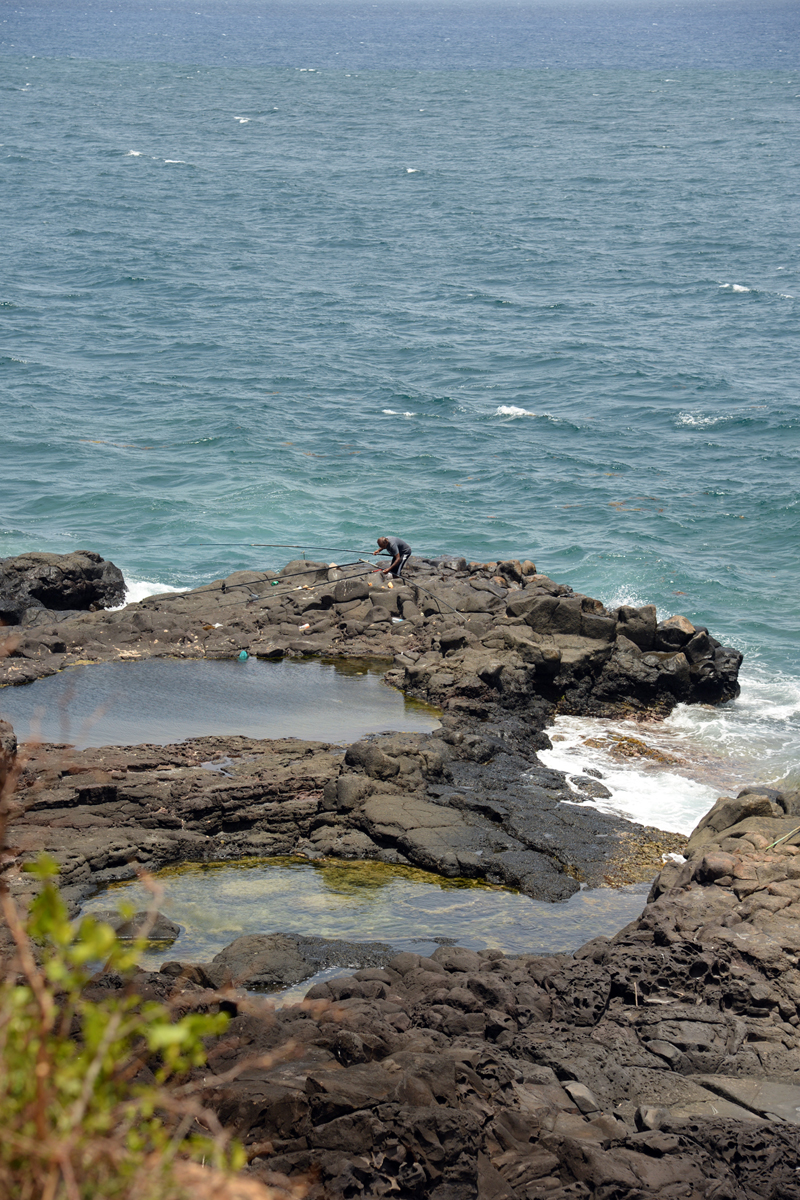 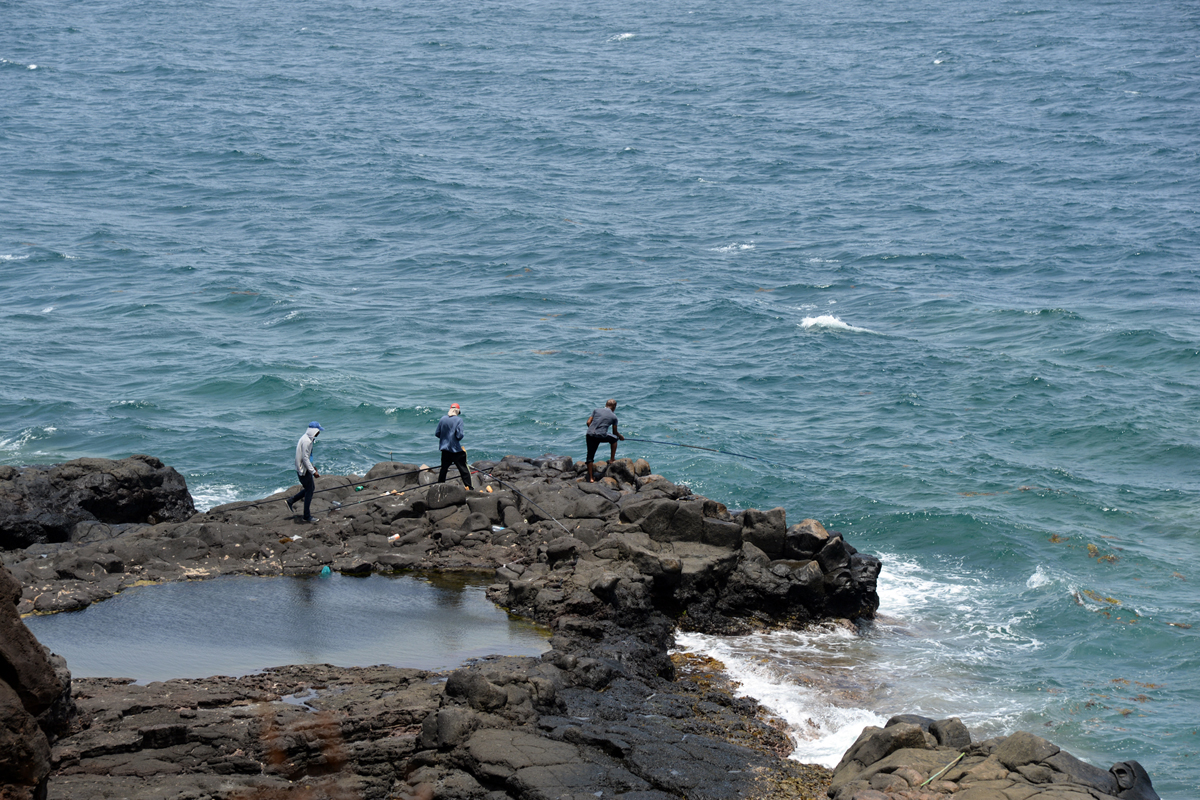 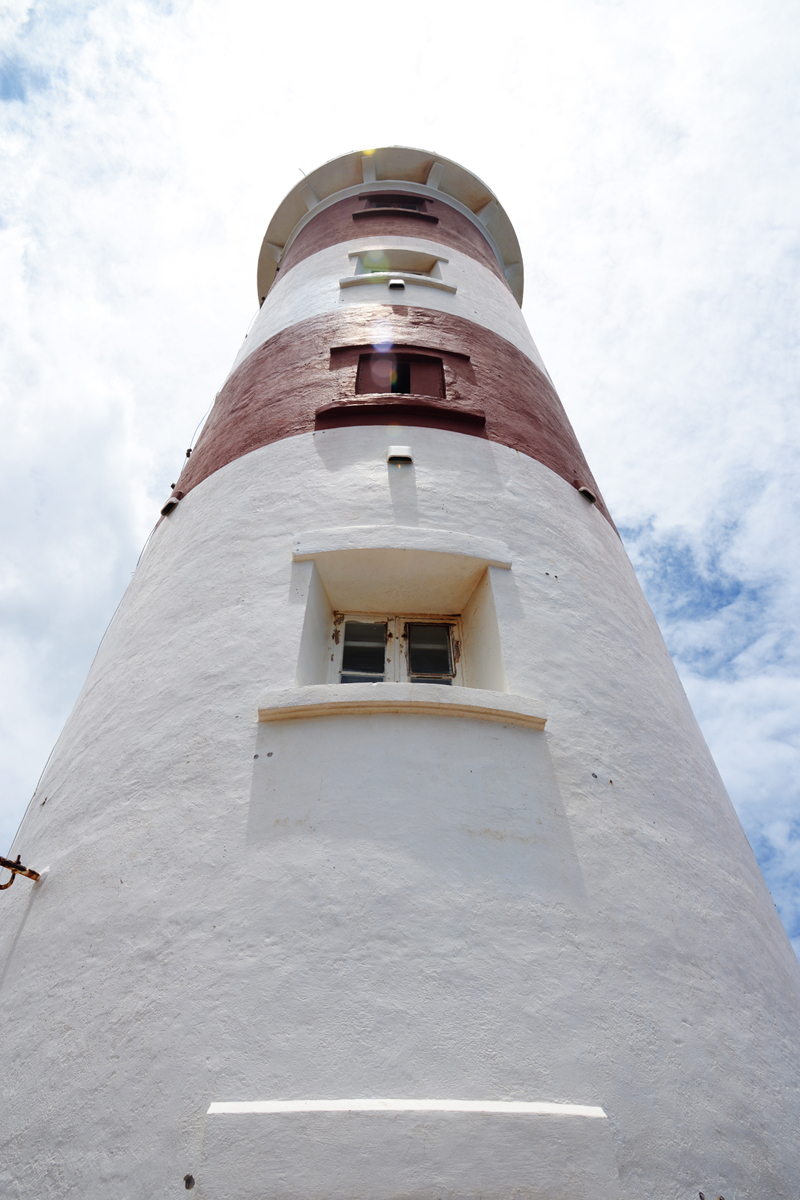 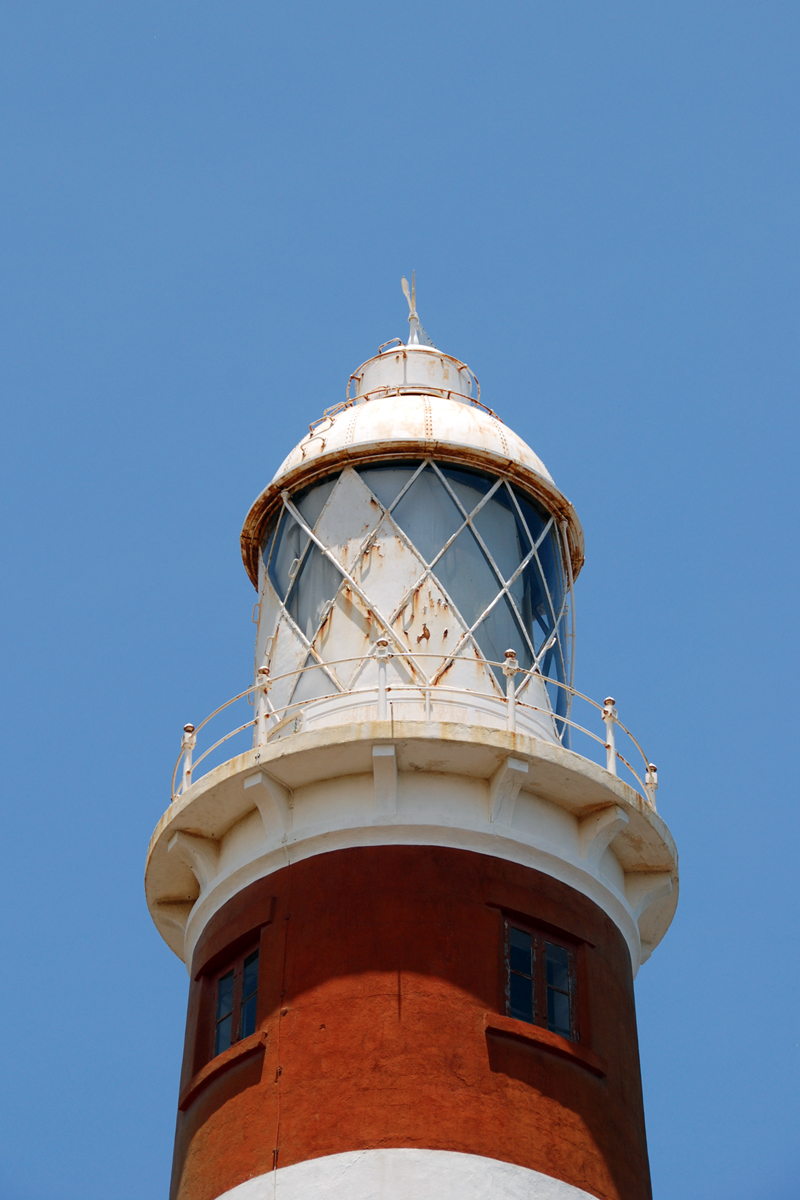 He told us that the building of the lighthouse startet in 1909 and was operational in 1910. The house of the lighthousekeeper was also built by the British around the same time (Mauritius became independent in 1968). About the lighthouse he told us that it was originally run on oil, but in 1973 it was connected to the electricity. The 30 m. high structure is also intact. Inside the tower, most of the interior is still the original from 1909. Last time I was here (might have been 2011) we could walk the stairs to the top and onto the balcony. From here you get a panoramic view of the coast, making it worth to walk 98 steps. 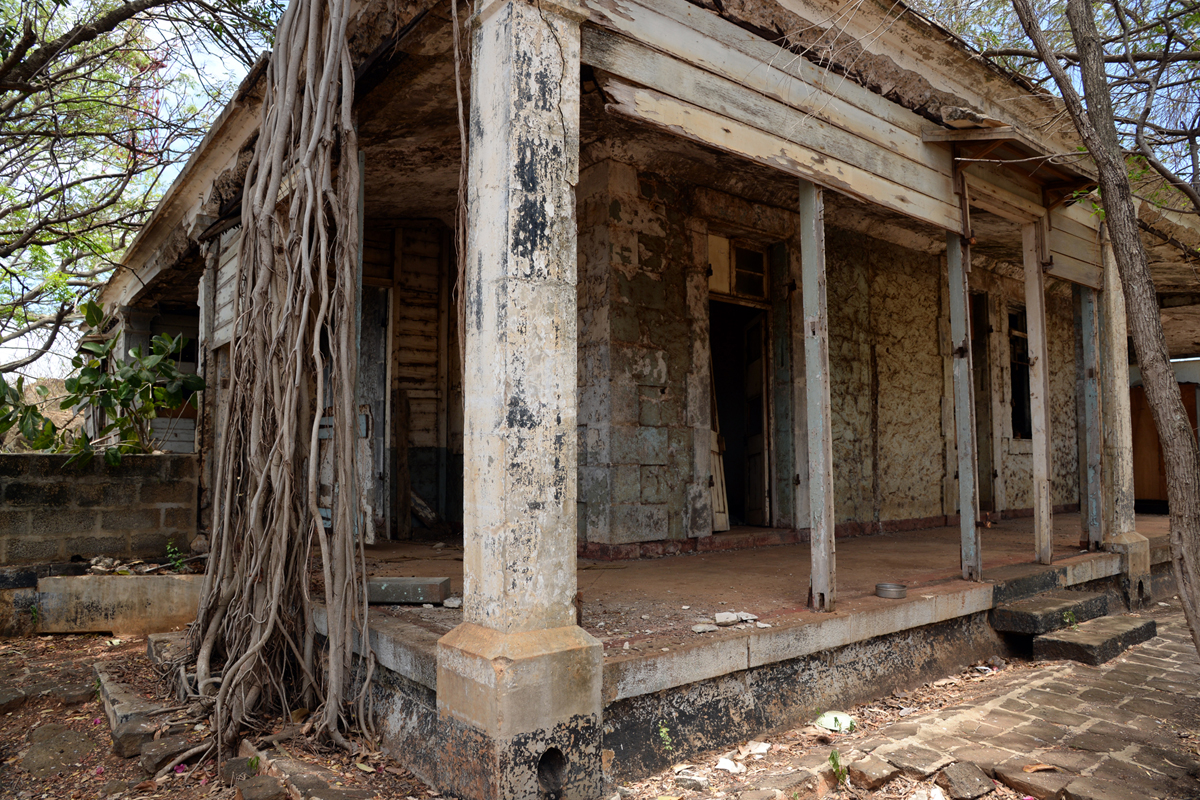 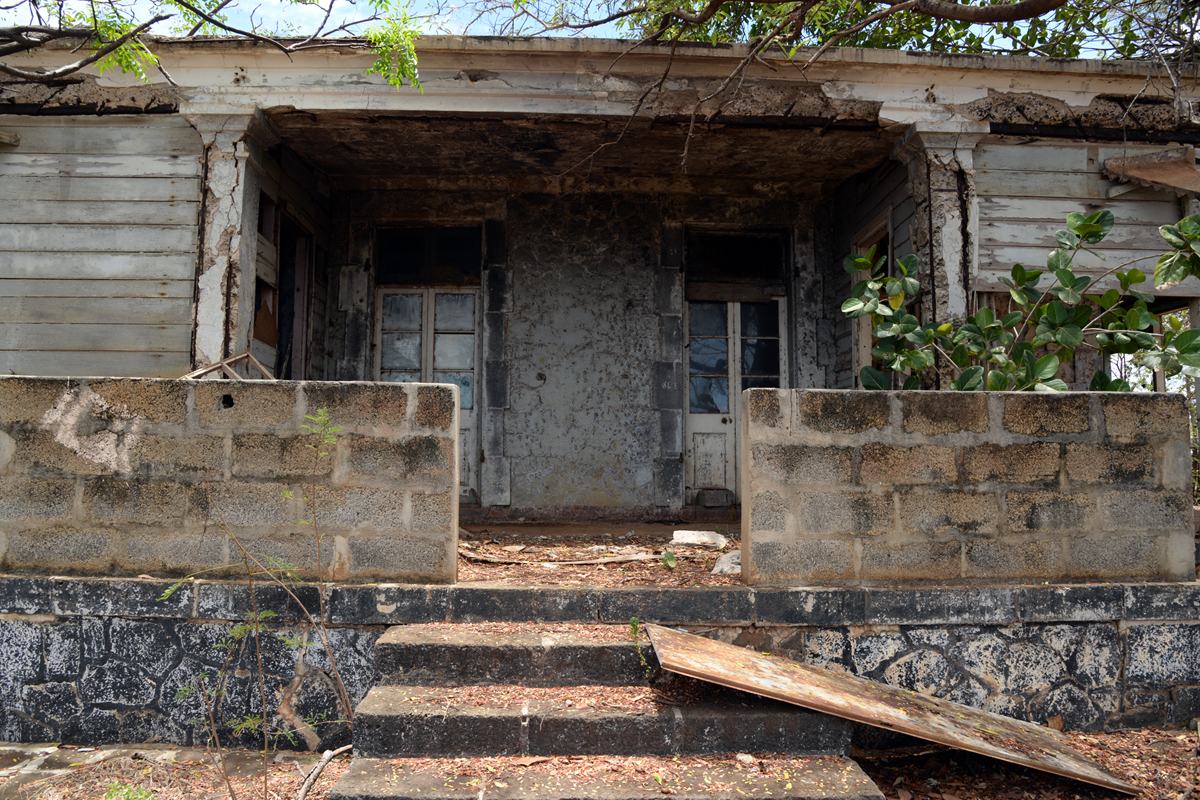 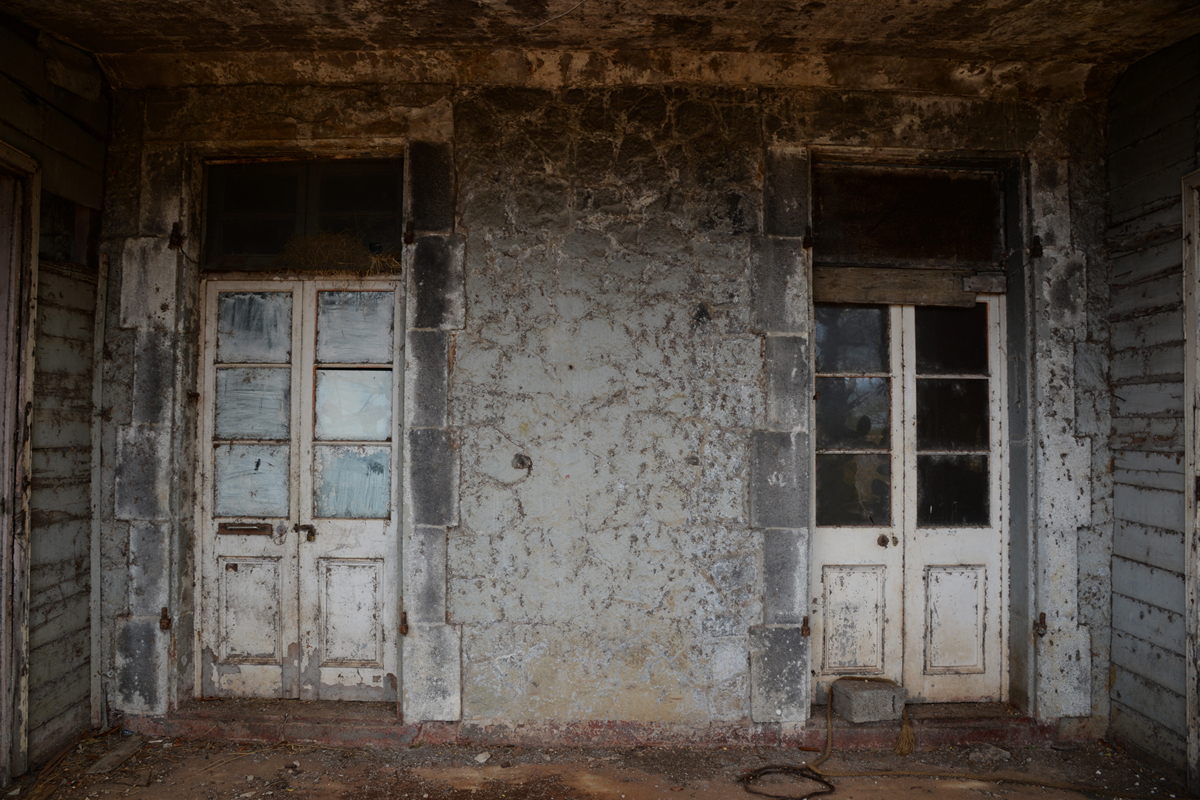 The man left us to ourselves to take photos and look around. He got visitors, so I didn't get a chance to ask for more information about the house. It does look as if it has been completely forgotten and left to nature to take over. If the lighthouse was automated in 1973, I quess the home was left around the same time. The house is such a contrast to the well maintained lighthouse which is open to visitors (tourists), 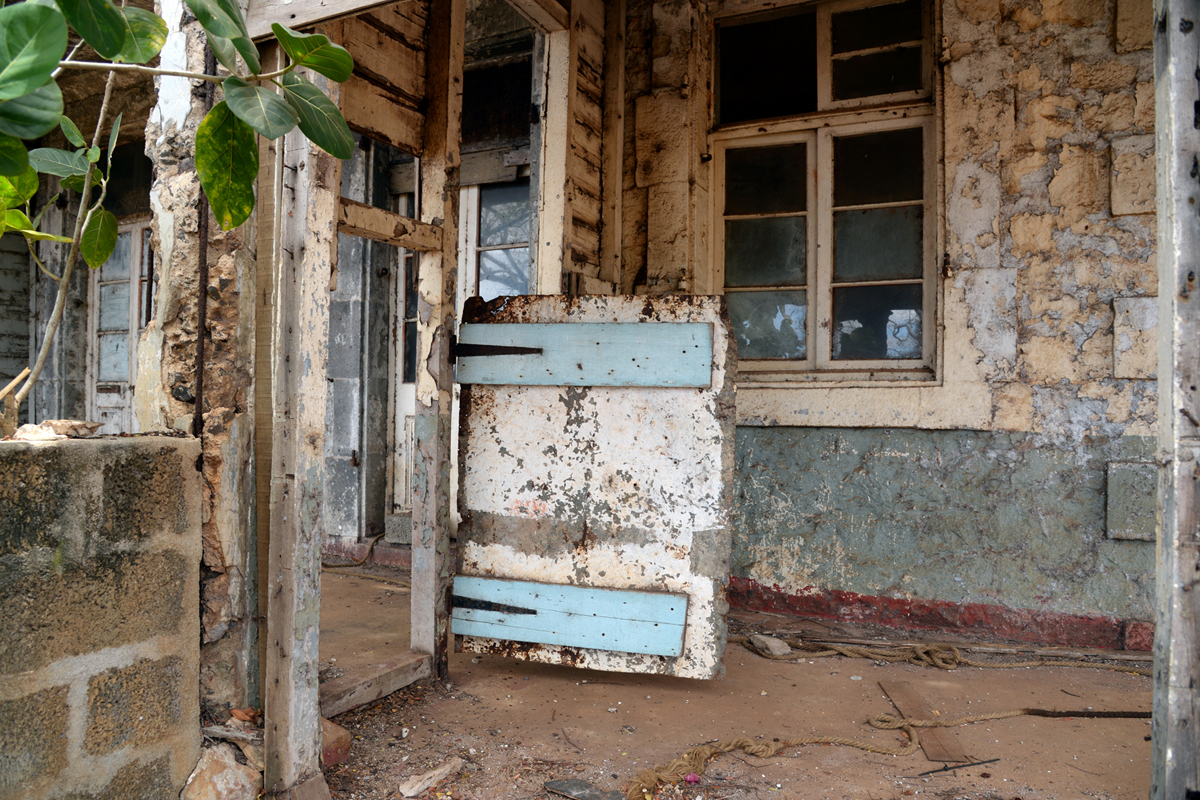 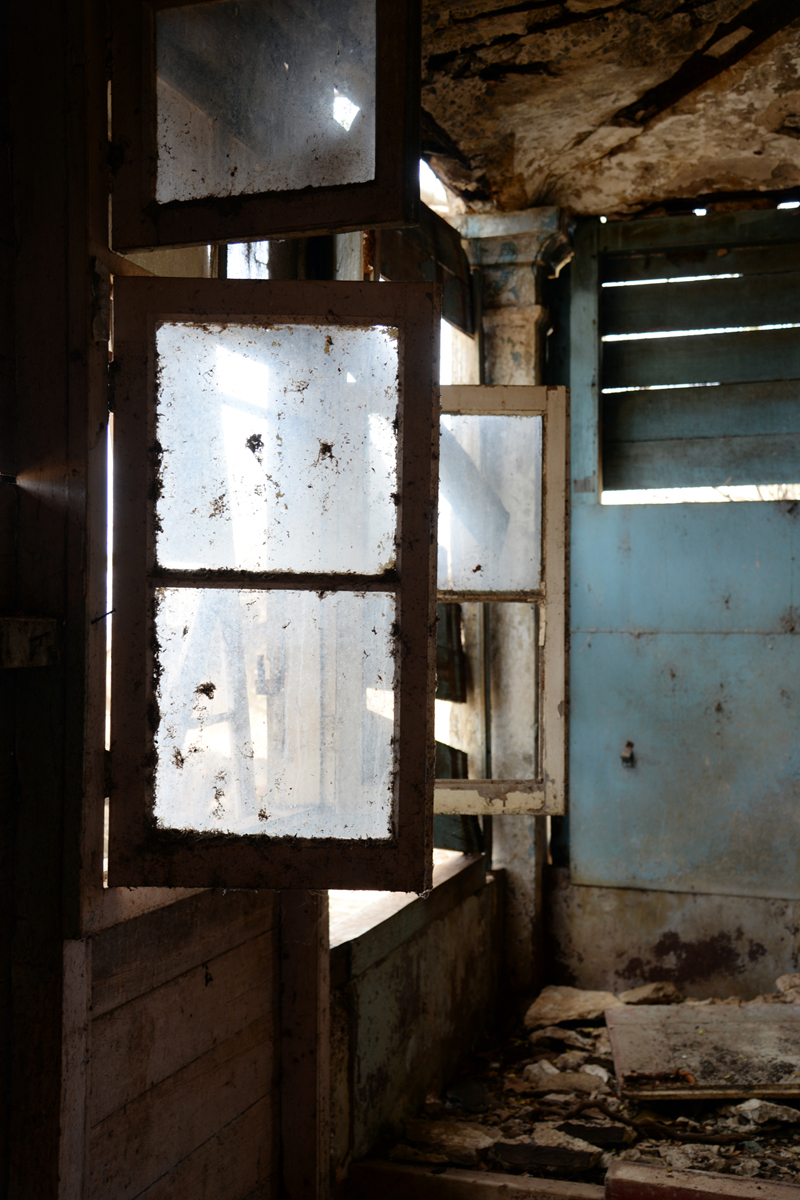 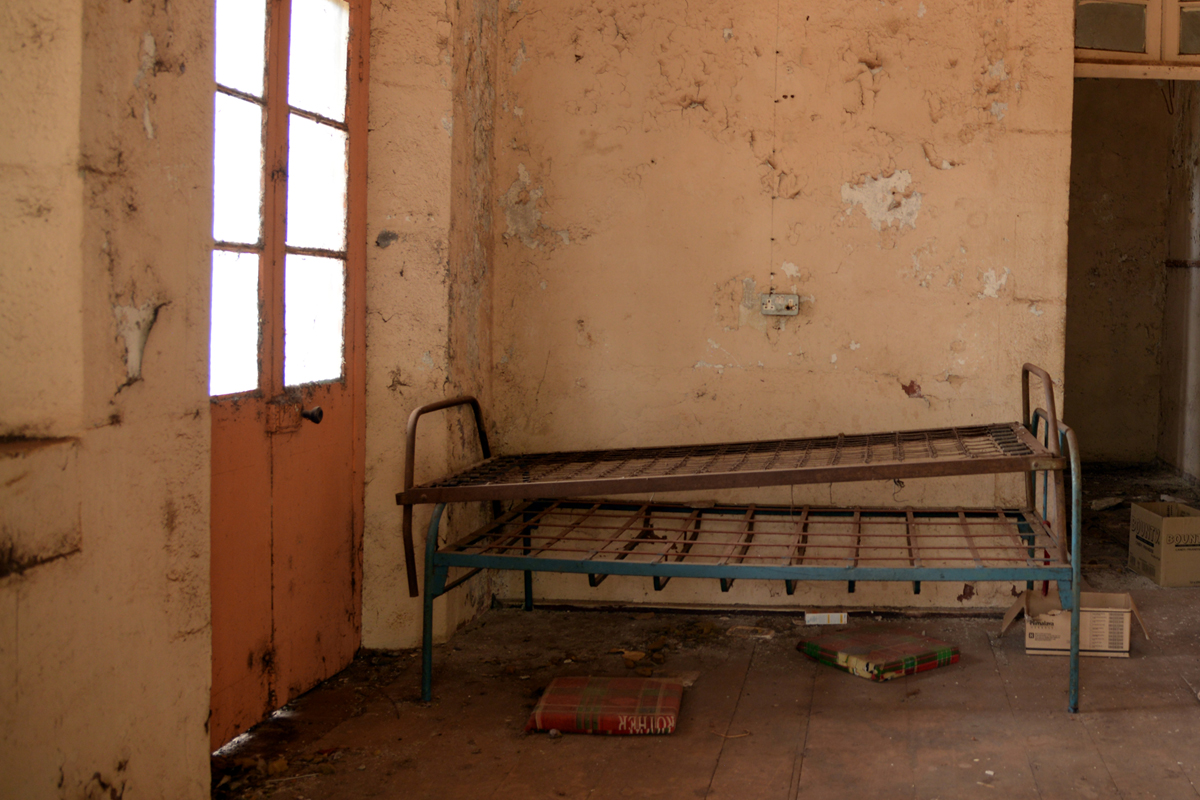 Because the doors were open I went inside. There are still 2 beds here. Rysty, but they are probably the original ones. Because the house is built in stone, it is solid. The doors and window frames are made in wood, so the haven't been able to keep up with time. 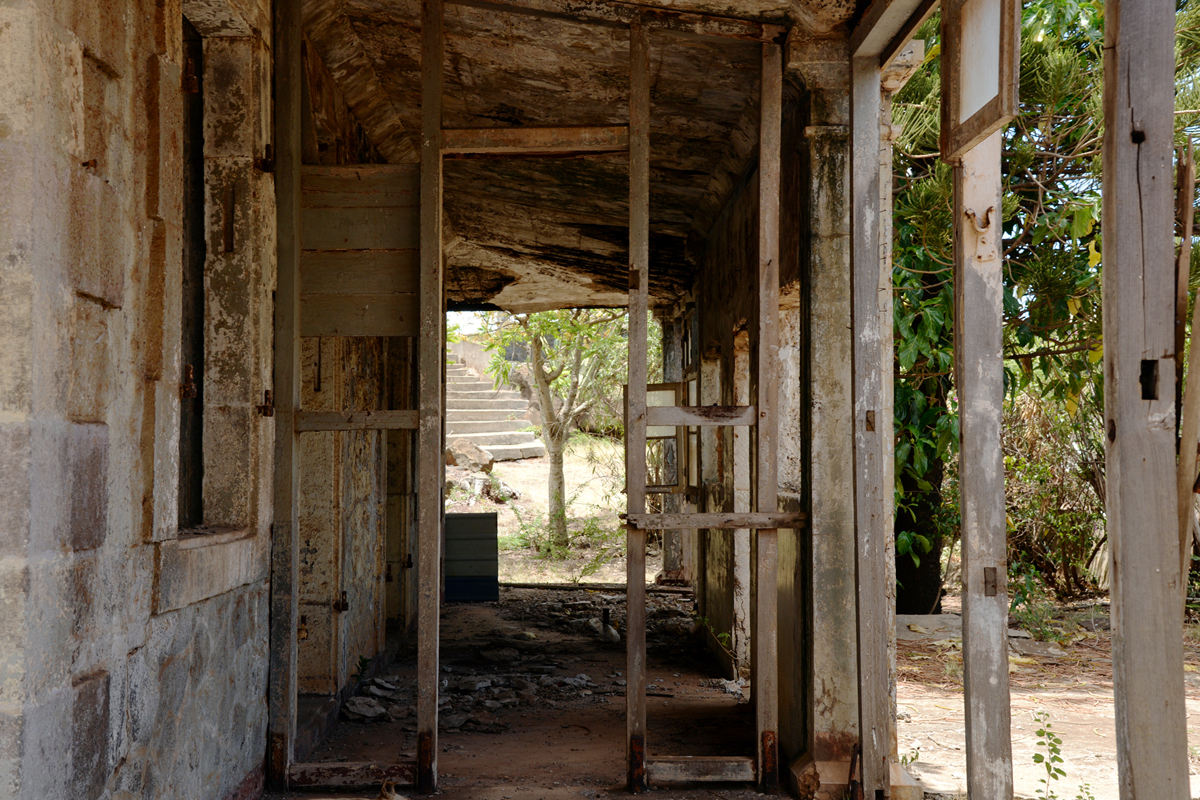 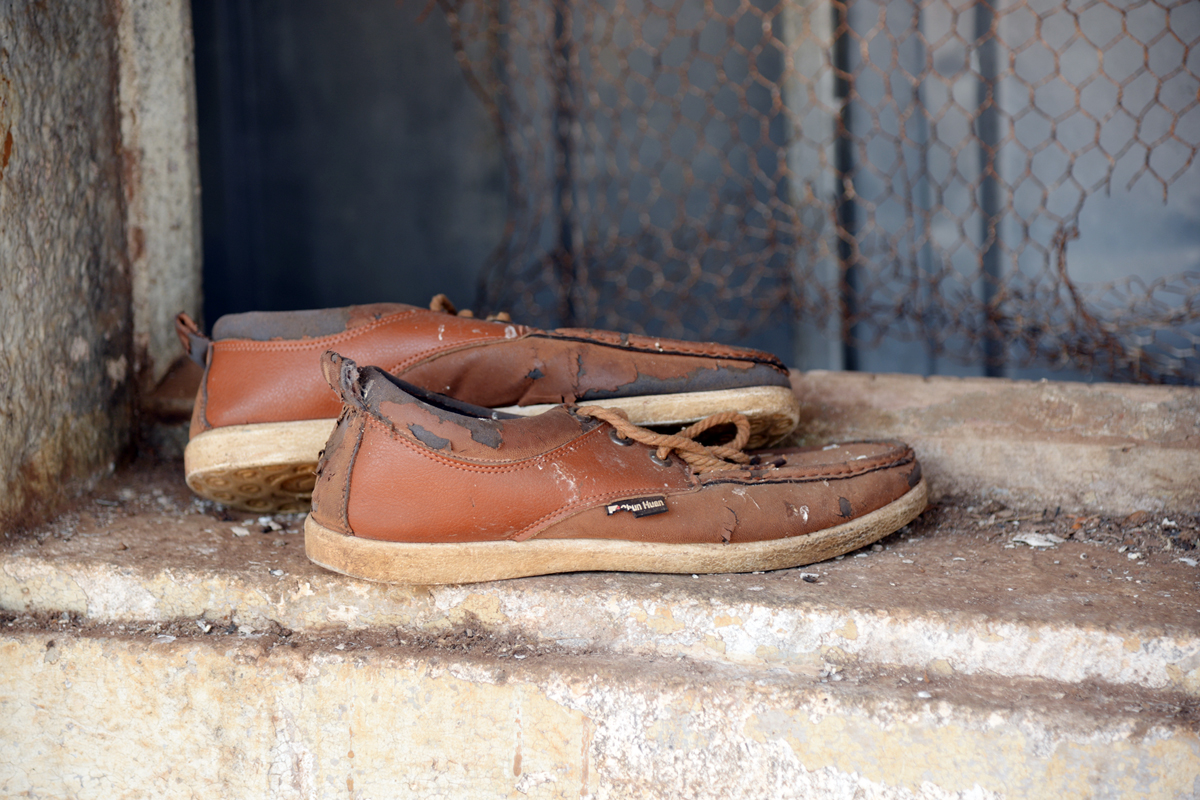 The house has a covered porch and has probably been a stately building long time ago. The porch on the southern side is overlooking the coast. In a window stands a pair of shoes. At least they do not look like they are as old as the house! Trees and plants almost cover the building. In a way it's hiding. I think that's why I haven't noticed the house before. The side facing the lighthouse is almost covered with shrubs and trees. Usually I feel that abandoned houses like this one, can be creepy, but I didn't get that feeling here at all. 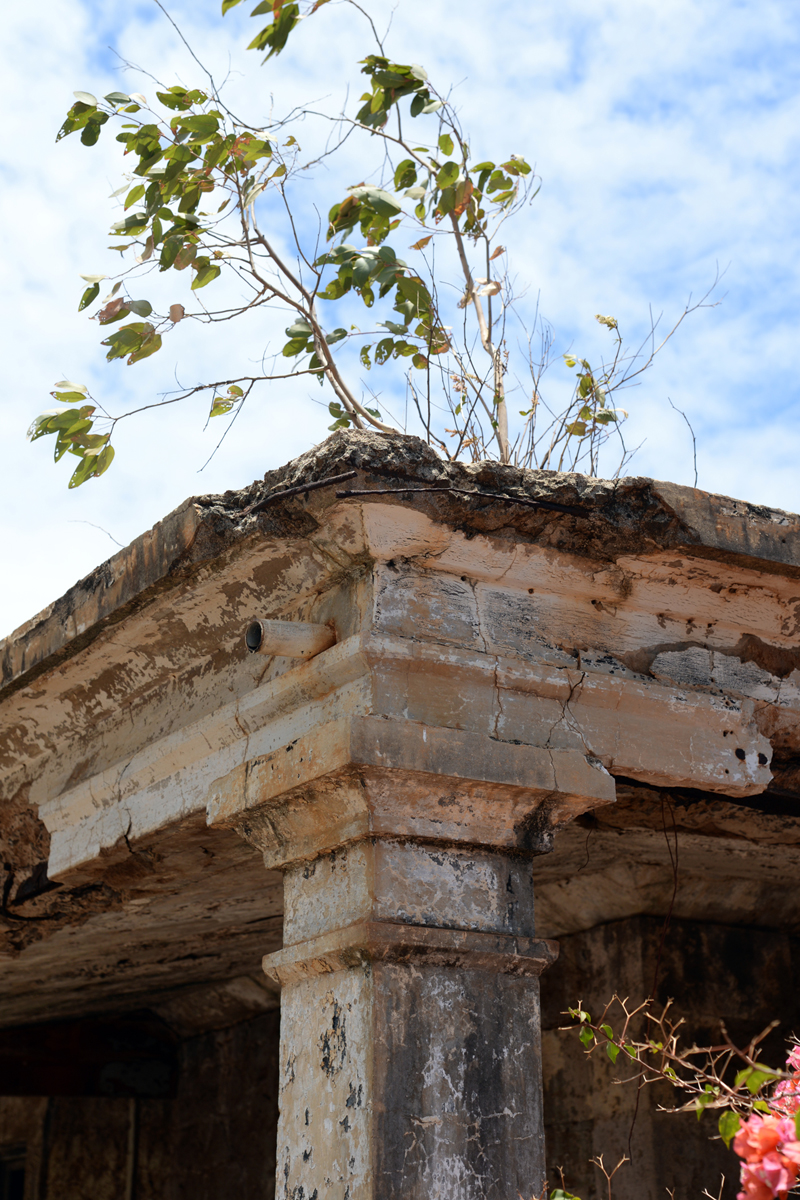 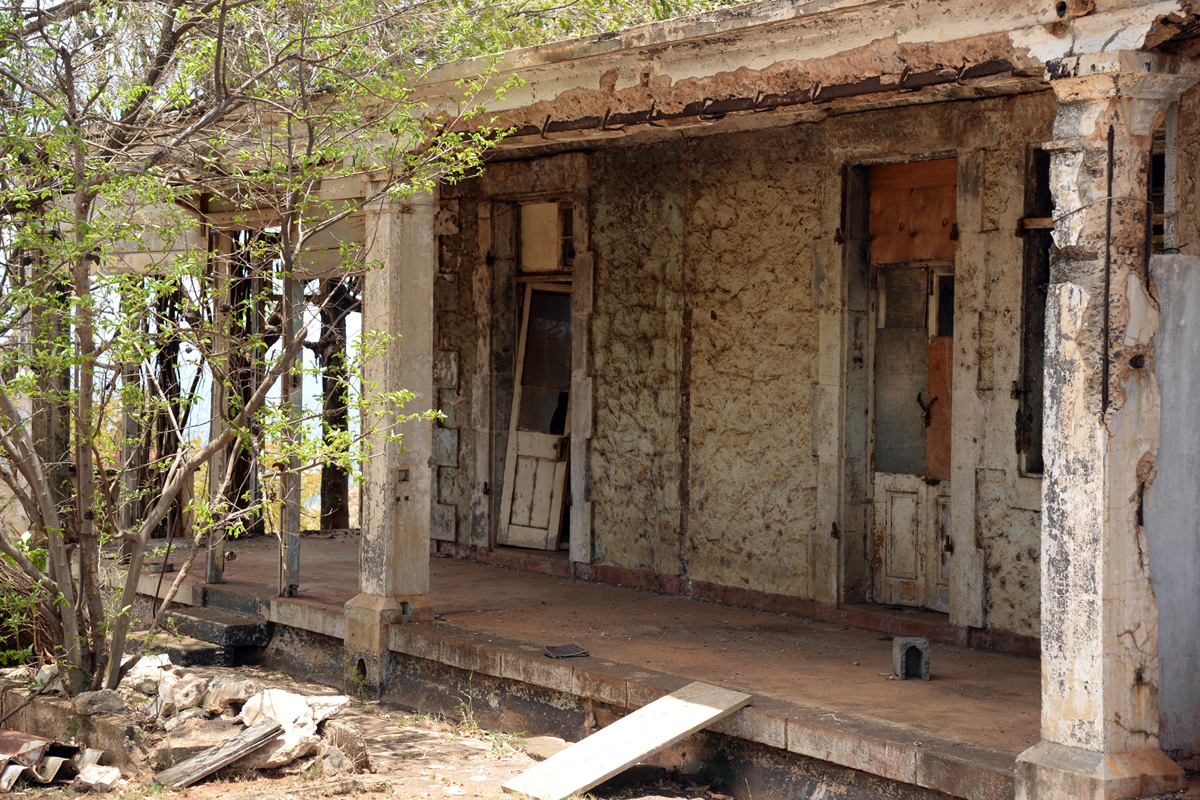 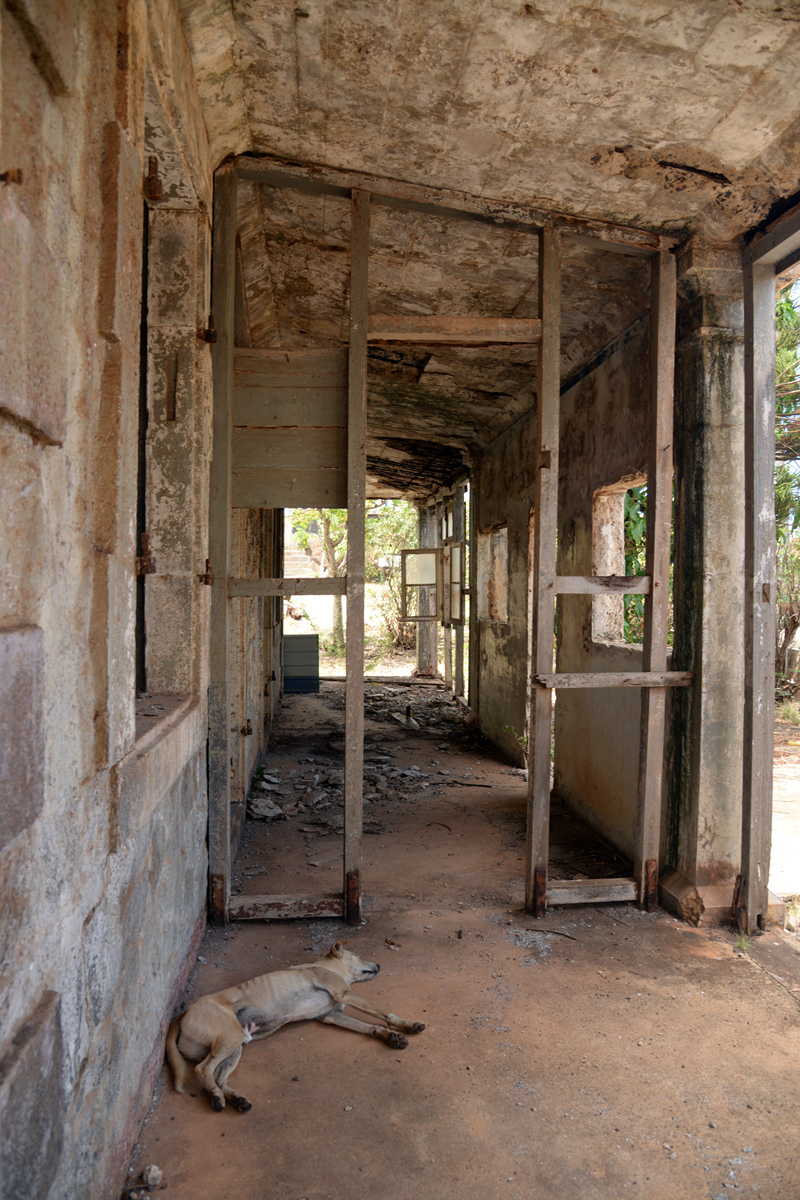 As far as I know there is no longer any other operational lighthouses on the island. But during the 18th century, when Mauritius was colonized, the island attracted many European countries because of it's strategic location. Because of increased trading and ships as the only source of transportation, lighthouses were built. The ships needed the lighthouses to guide and help them navigate. I have seen other lighthouses in the southern part of Mauritus, but have no idea for how long they were operational, or if some of them still are. The port in Port Louis, the capital, is still a busy port that sees a large amount of container ships. 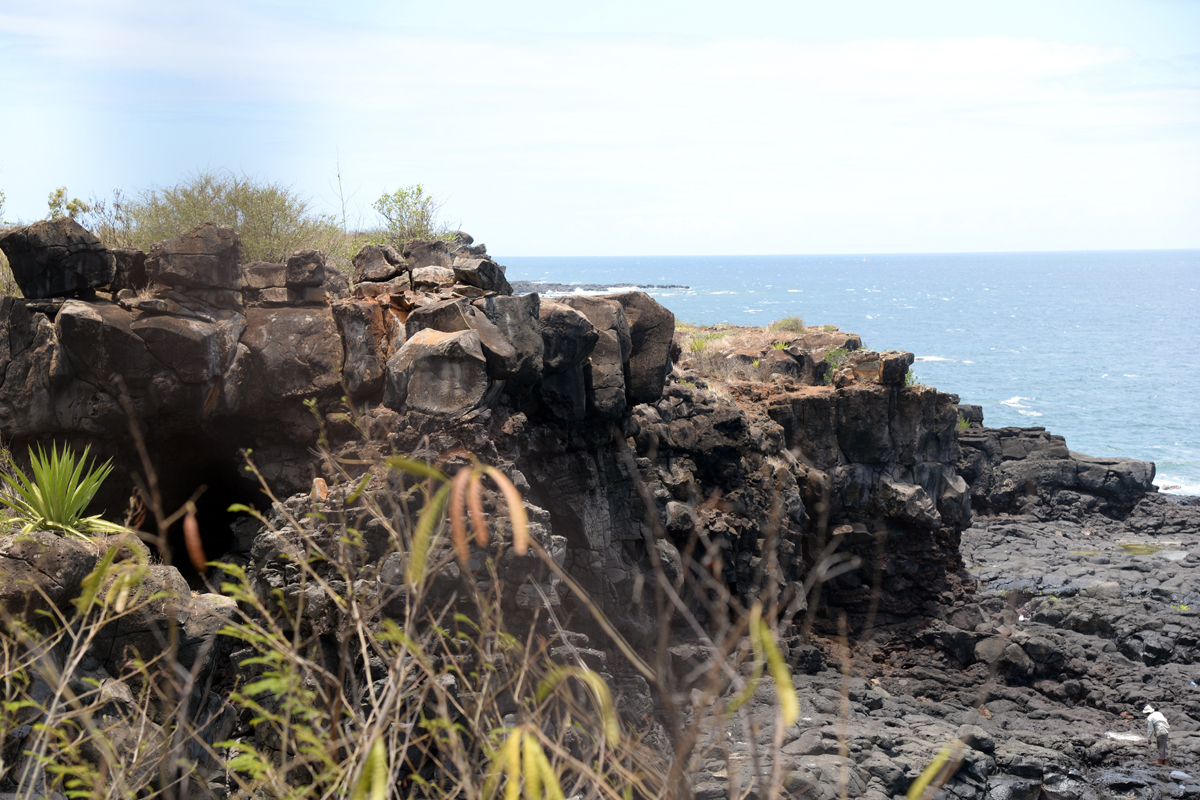 In a way its a peacefull place, yet that coast does look fierce. Especially when it's windy and the wawes are splashing against the rocks. But on a calm day it's a popular and photogenic spot at sunset. I have managed to find out that it's the Mauritius Ports Authority who is in charge of maintenance of the lighthouse. If you want to visit, you have to obtain permission from them. Then you are allowed to enter the lighthouse and walk up to the top. Source:
https://mauritiusattractions.com/albion-lighthouse-p-1619.html https://www.mauritiusexplored.com/top-activities-mauritius/albion-lighthouse/

Latest travel stories, check out :
Mauritius – «A Garden of Eden»

Beautiful and sad... Wonderful story, I guess I have a thing for lighthouses as I often review my photos from the few I've been to :) Your story was the first I checked from the pinmapple digest :)))

Thanks :) I think many people have a thing about lighthouses. To me it is the way they are a guide for ships. A lifeline that has helped so many sailors throughout history :)

True! ;) The mighty guardians of light in the dark night! :)

A pity you could not go in and up the stairs for the grand views you mentioned you have seen previously. Sad fact most lighthouses are off limit to people visiting like when manned by people who would gladly show you around.

Thanks :) Yes, I do remember the view to be great, so I should have liked to go inside and up the stairs. But then, I should have checked a little more before we went down there. Last time there were no restrictions. We just turned up. Now you have to book a visit as part of a tour group or get the permission from the Port Authority. But I didn't check that out before after our visit. One good thing is, that I actually noticed the lightkeepers home. I havent' been aware of that before. The time of day was when sun was at it's warmest. The dog actually found a good place to get some shade :)

So many changes happen all the time one is almost forced to plan before going anywhere. Homes for the lighthouse keeper would be a great place to purchase property, great views!

I thought the same as you, when I saw the house. The house has potentials and the location has a gorgeous view :)

Might be worthwhile making inquiry, imagine living in a place like that. Small tea room to the side of the house, where visitors to lighthouse could stop to enjoy the view!

A splendid idea! then it would be possible to sell locally grown coffee and tea to visiters !

Would be an amazing place to invest oneself, enough company in the day, absolute peace at night with great views all year round.

I really like the idea. It will be worth checking out :)

The house is such a contrast to the well maintained lighthouse which is open to visitors (tourists).

That abandoned house could be a home for a family (or for any other people). I would gladly live there. I am a licensed amateur radio operator, and I would regularly go up to the lighthouse to make special radio contacts with the /LH suffix.

By the way, there are no lighthouses in my country (in Hungary). I have not visited any lighthouses so far.

When I walked arojnd the house, I did imagine that it has been a home of a family. The porch has a great view of the southern coast. Must have been lovely to sit there. The lighthouse certainly would be an intresting place for you when you are a radia operator. The coasts all around in the world has lots of them. Even though, I do think most are automated. Still there is something about them. I think it's the thought of them being a such a helpful guide for ships. Their light in a dark and stormy night, is precious to ships pasing.

Hiya, @choogirl here, just swinging by to let you know that this post made it into our Honorable Mentions in Daily Travel Digest #1409.

Such a cool post1 The ocean and rocky coastline are beautiful and remind me of New England here in the USA.

That abandoned house, though, is what really had my attention. As you said, the stone walls were solid, but nature was swallowing up everything else!

Thanks for sharing this!