HBD To HIVE Conversions Are UP | How Much More Hive Was Generated?

In August this year, HBD was trading above 1$, and HIVE to HBD conversions were massive. There were days when 2M HIVE was sucked in and put into HBD, removing HIVE from circulation and making HIVE deflationary.

However, the situation has changed now, HBD is trading below the peg and it is being converted to HIVE, creating additional HIVE in circulation.

A reminder that HIVE to HBD conversions were not available before the last on June 30, 2021. Before that only HBD to HIVE conversions were available, making the conversions one directional, basically constraining the supply of HBD, creating conditions for HBD to pump without removing HIVE from circulation, but then adding much more HIVE when the prices were down.

This year this was fixed, enabling conversions in both directions and making HBD much better and the overall Hive ecosystem much better.

Let’s take a look at the numbers. 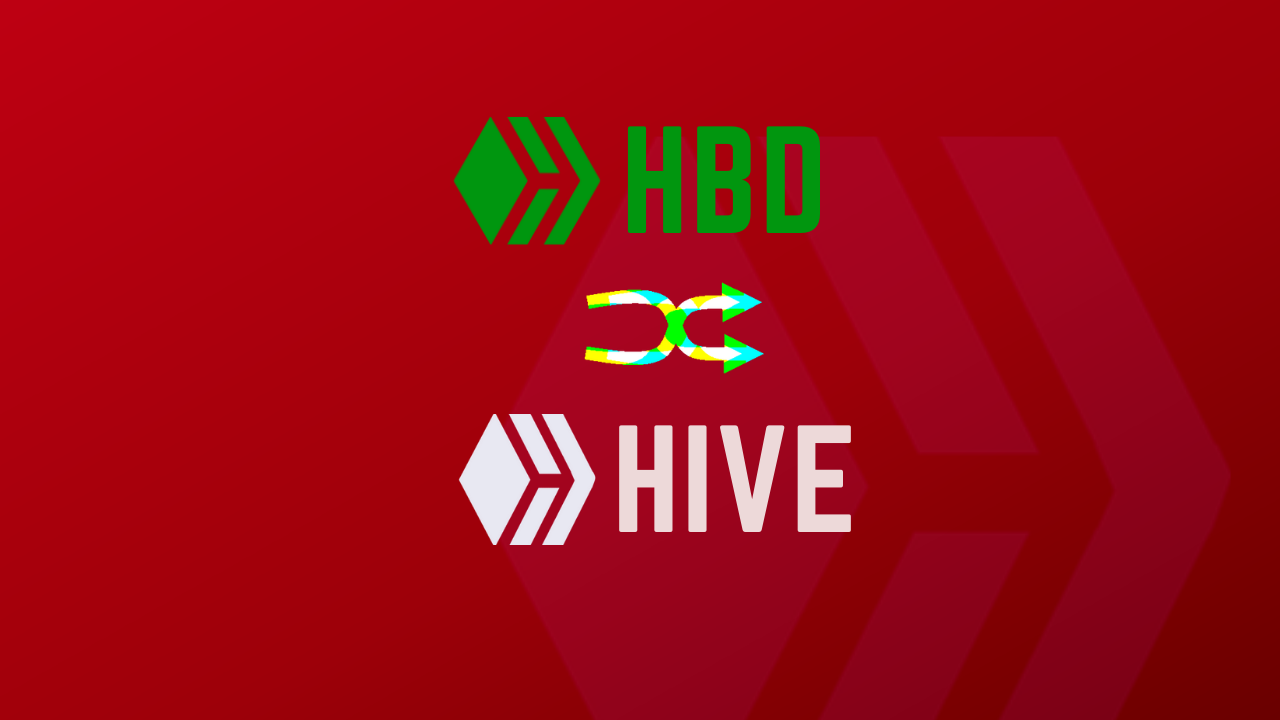 At the moment of writing this according to https://hiveblocks.com/, there is around 365M HIVE, 17M HBD in circulation, (excluding the 7.1M HBD in the DHF), and a debt ratio around 5.3%.

For context, first let’s take a look at the HBD to HIVE conversions in the last five years. 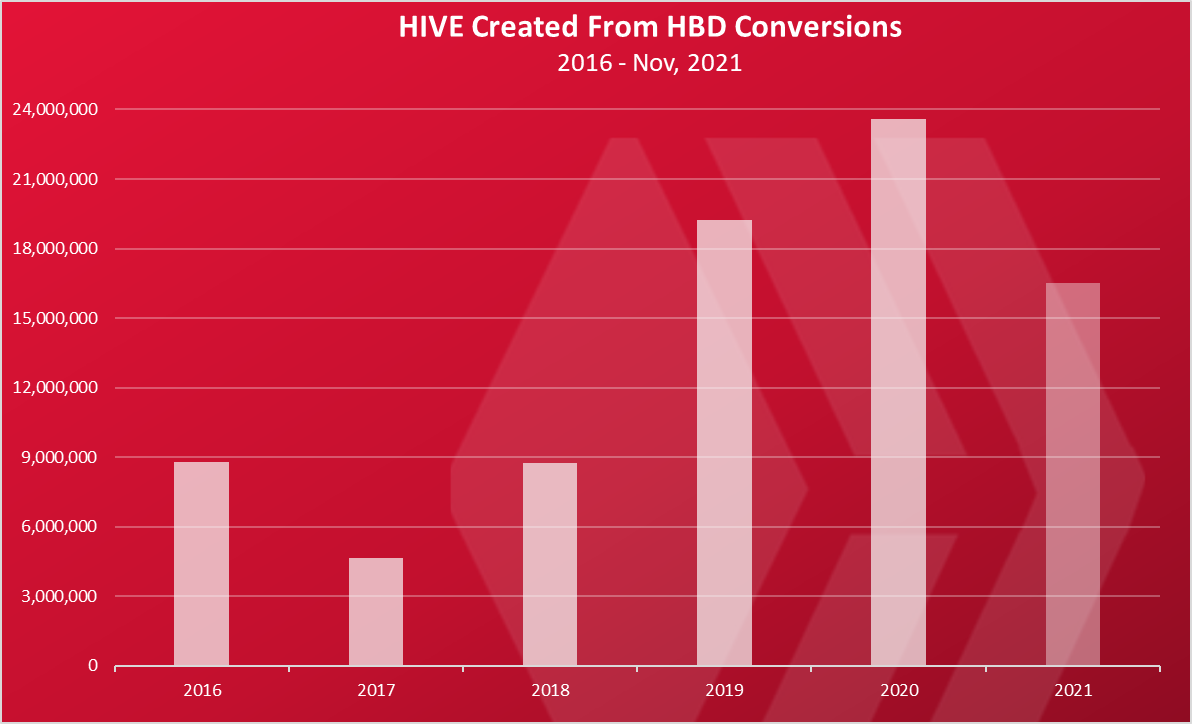 The above is the amount of HIVE created by year from HBD to HIVE conversions. We can see that the record high was in 2020 when a total of 23.5M HIVE was created from HBD conversions.

HBD To HIVE Conversion in 2021 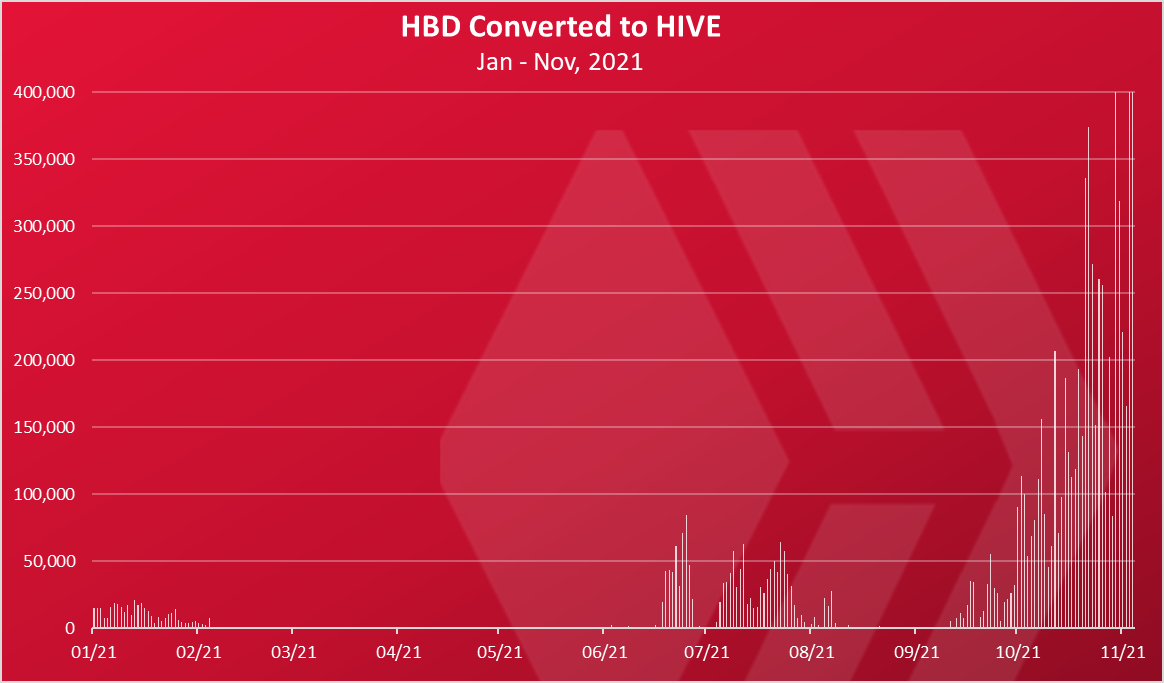 We can see that in the last month there is a lot of HBD converted to HIVE. This is because HBD is trading bellow the peg and HBD is converted to HIVE because the blockchain is always providing a 1$ price for the HBD in terms of HIVE. In theory you can profit if you buy HBD on the external markets at prices below the peg, convert it to HIVE and sell the HIVE at profit.

HIVE Created From HBD Conversions in 2021

The previous chart was about the amount of HBD converted to HIVE, now here is the chart how much HIVE was created from those conversions in 2021. 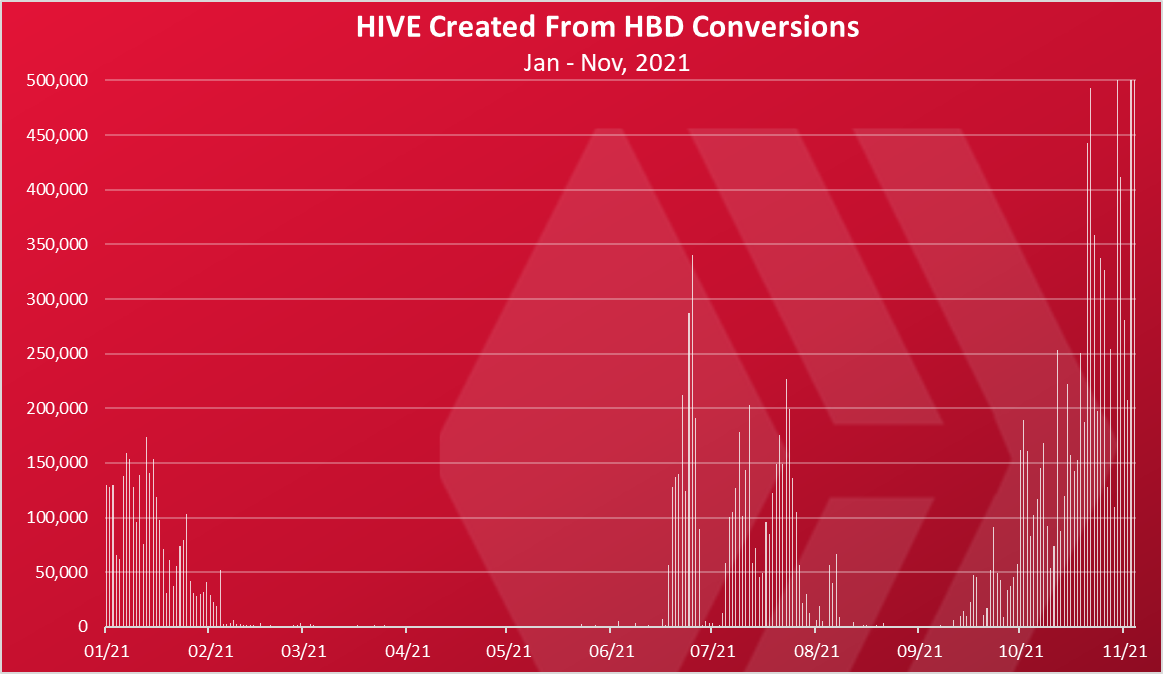 Here again we can see the increasing trend in the last month for HIVE created from HBD conversions.

A total of 6.5M HIVE was created in October only from conversions, reaching a half a million HIVE per day on a few occasions. Even with amounts of additional HIVE created in October, the price of HIVE still performed quite well.

Now let’s take a look at the recent addition where we can convert HIVE to HBD.
Here is the chart. 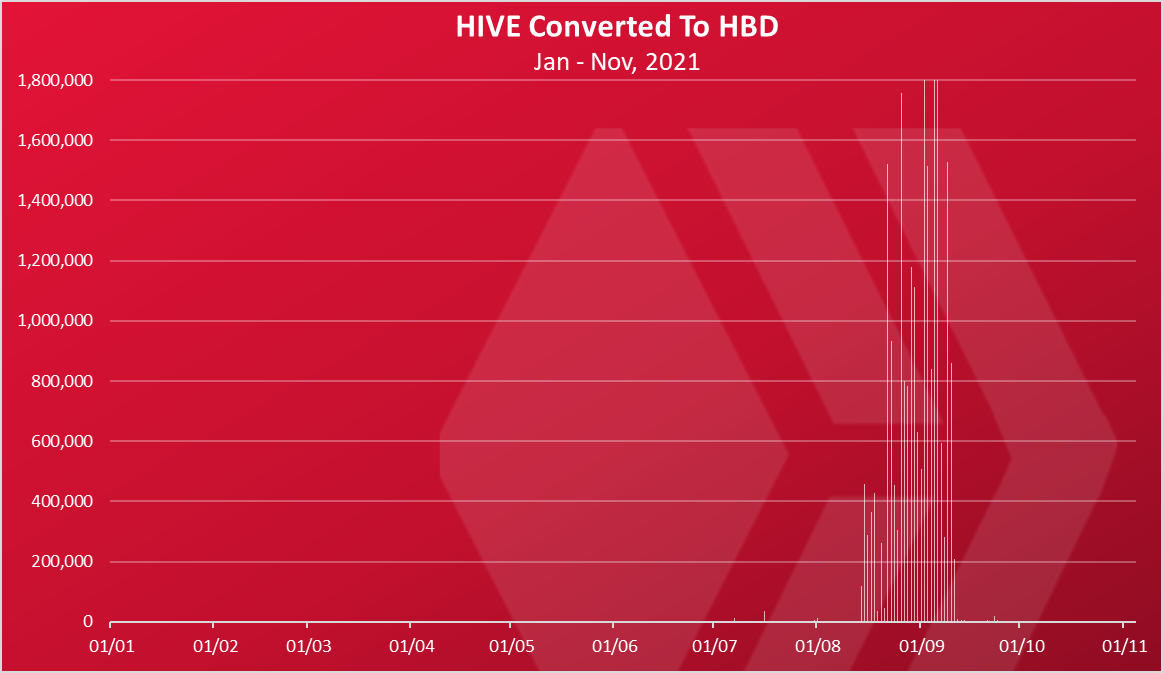 I have included the whole 2021 on the chart, but these types of conversions were technically possible only after June 30, 2021.

This was happening mostly because HBD was trading above 1$ mostly because of speculators on the Korean Upbit exchange and converting HIVE to HBD was profitable.

Here are the top accounts that converted HBD to HIVE in October 2021. 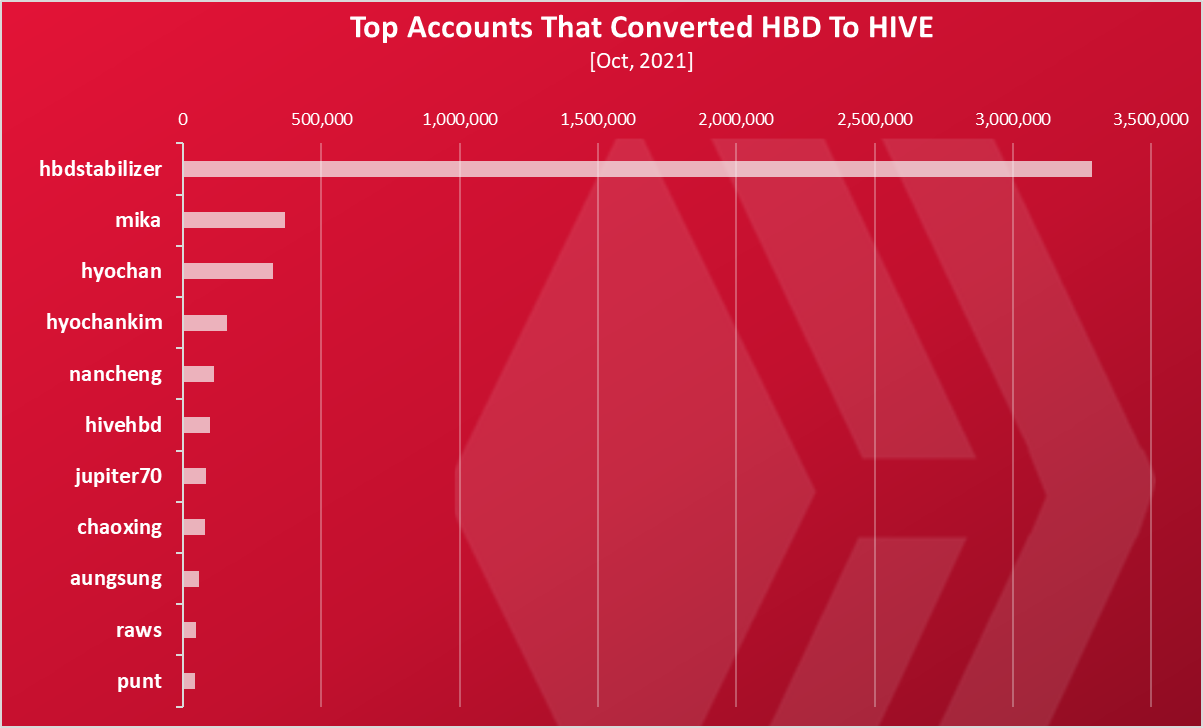 The @hbdstabilizer is dominant on the top with 3.3M HBD converted to HIVE in October 2021. As already mentioned, this account is working to peg HBD to 1$ on the internal DEX. @mika is on the second place with 370k HBD, @hyochan third with 320k HBD. These are accounts that trade HBD on Upbit.

Because of the low liquidity and most of the HBD supply and trading volume on the Korean Upbit, HBD is often in the hands of speculators on Upbit. However since the introduction of the HIVE to HBD conversions and the @hbdstabilzer account, we have seen HBD trading in the range of 0.95$ to 1.2$ . Just a reminder that in the past these swings were much higher up to 8$ and down to 0.6. There has been improvement.

I still personally believe that the Hive ecosystem can benefit a lot from HBD and in the long run, a stablecoin would trap value in the system making HIVE deflationary. HBD is better today than it was a year ago, but it still has a lot of room for improvement like increased liquidity, USD to HBD listings on big exchanges, better and faster conversions, etc … that should result in more use cases and adoption.

Thanks for these beautiful article.i hope hbd increase their prices.we really need and deserve a high price.which may also go a long way to making priority better

What a detailed breakdown. Thank you for making it consumable for each and every one of us.

Looking on Peak I see that HIVE to HBD have a 5% fee, but I don't see HBD to HIVE having any fees if I got that right. Thus buying from 3rd party markets HBD and converting to HIVE and selling back should not incur additional fees, am I right? What would be the minimum price on 3rd party markets to make this flow worth doing (including fees)?

HIVE to HBD you get half of it instantly as HBD, the rest after 3 days. For HBD to HIVE you only get the full amount of 3 days. I think that's the reason.

The danger of HBD to HIVE is that if price fluctuates too much, you could get an amount of HIVE back that trades for less HBD.

Yes no fee for HBD to HIVE, only the open market prices and the three days conversion window when prices change. That's why I mention faster conversions ....

Thanks for this explanation.

$0.14
1 vote
Reply
[-]
poshtoken (72) 3 months ago
The rewards earned on this comment will go directly to the person sharing the post on Twitter as long as they are registered with @poshtoken. Sign up at https://hiveposh.com.
$0.00
Reply
[-]
mistural (64) 3 months ago

If HBD can actually stabilize in the $0.95-$1.05 range... or better yet $0.97-$1.03... it opens up the possibility for actual decentralized ecommerce that isn't speculation driven. If you're a merchant selling goods and services, you want some kind of assurance that your inventory is of the same value today as it is tomorrow, and so on.

I think it would be a welcome thing in the greater Hive ecosystem.

Very nice explanation, I personally believe if hbd can be a stable coin the hive ecosystem will benefit from it

This is helpful. Thank you.

really a very detailed analysis, I hope HBD will also get a more decent price, and thank you for this useful article