What Is The Share Of The Hive Power That Is Actively Voting/Curating?

If we take a look at the amount of Hive powered up on hiveblocks.com, we will see that it is around 161M HP at the moment. HP has a lot of use cases and one of them is curating posts. Thins is not all of the Hive Power is being used from everyone to curate posts. Some accounts have never curated posts. This might sound strange for the avid users around, but this is the case.

Let’s take a look what share of the Hive Power is being actively used for curation. 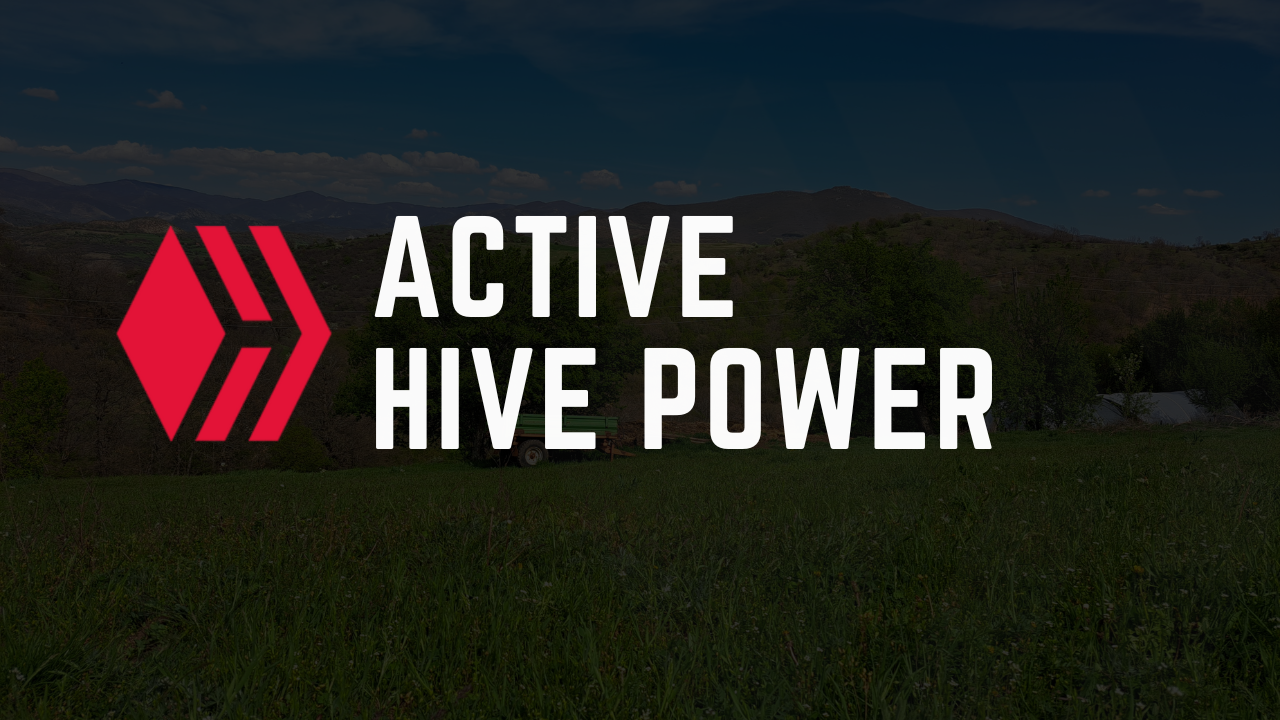 This is a type of data that I wanted to do for a while now but it was always left behind by some other tasks. Now its time has come. A long time ago (four years ago) @crokkon made a similar post, with some additional data here.

We will be looking at:

Number Of Votes Per Day

First let’s take a look how many votes per day are made. Here is the chart. 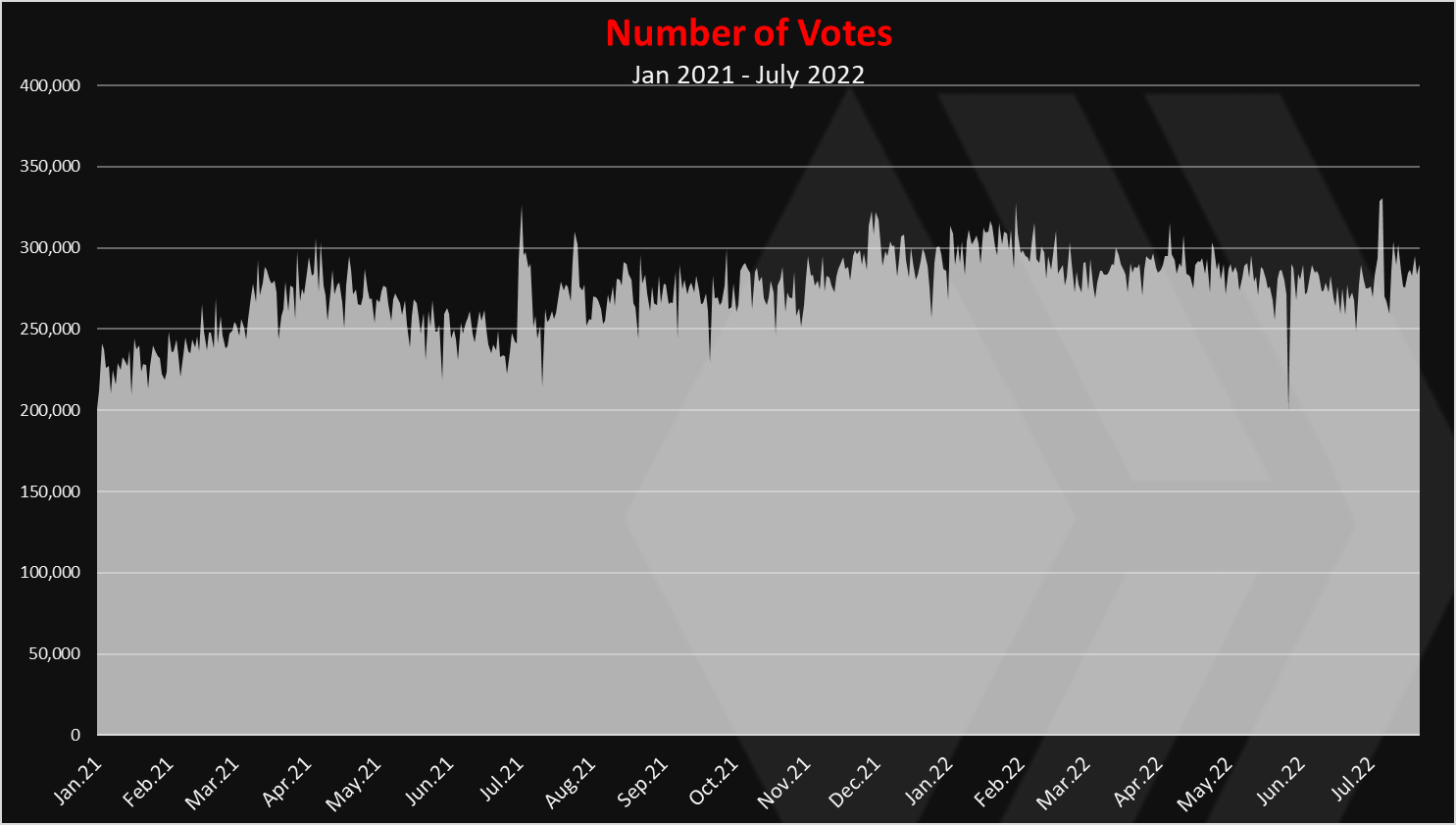 Number Of Accounts Voting Per Day

What about the number of accounts curating/voting daily? Here is the chart. 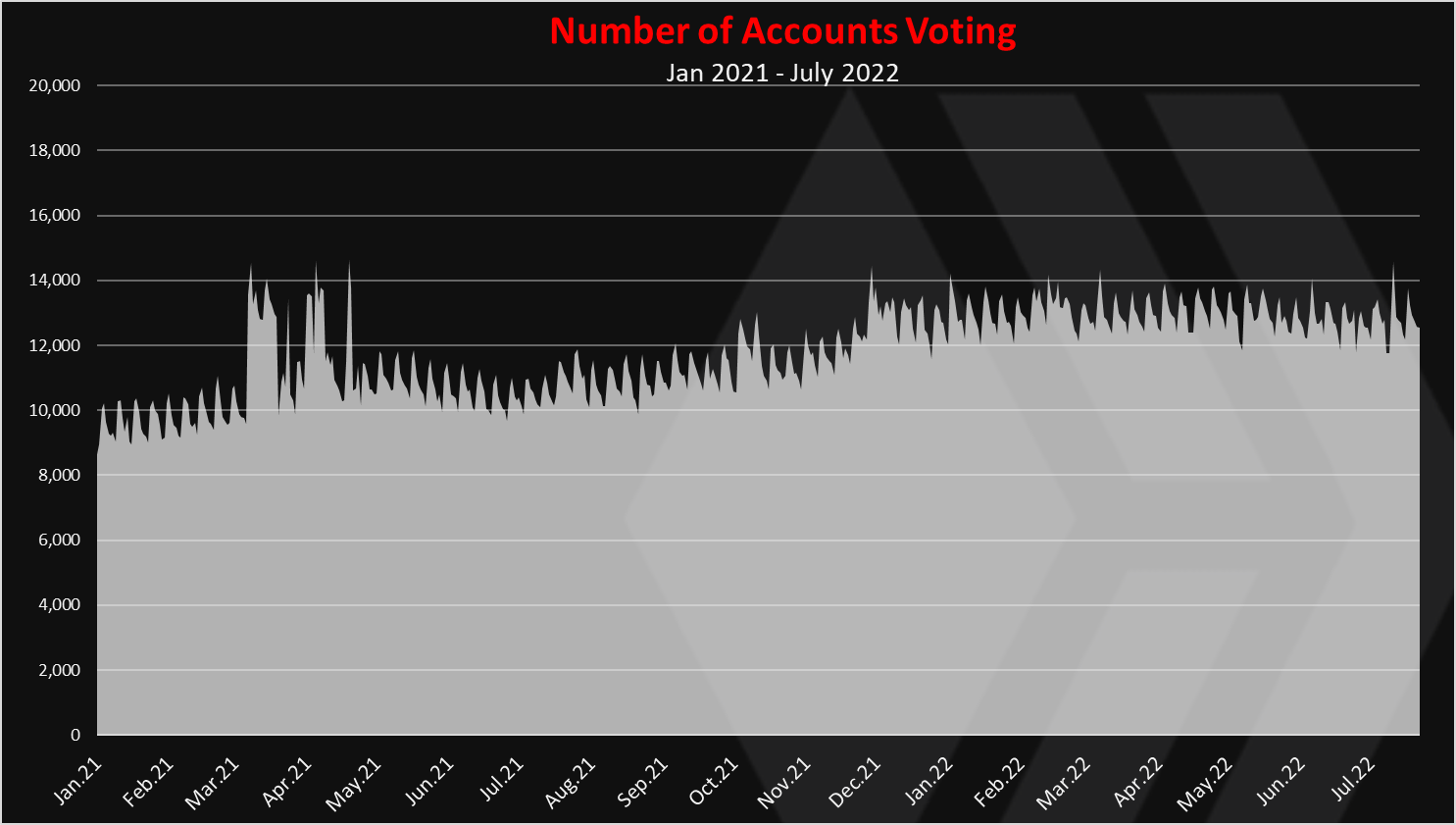 Now for the interesting part. What is the active HP voting daily? 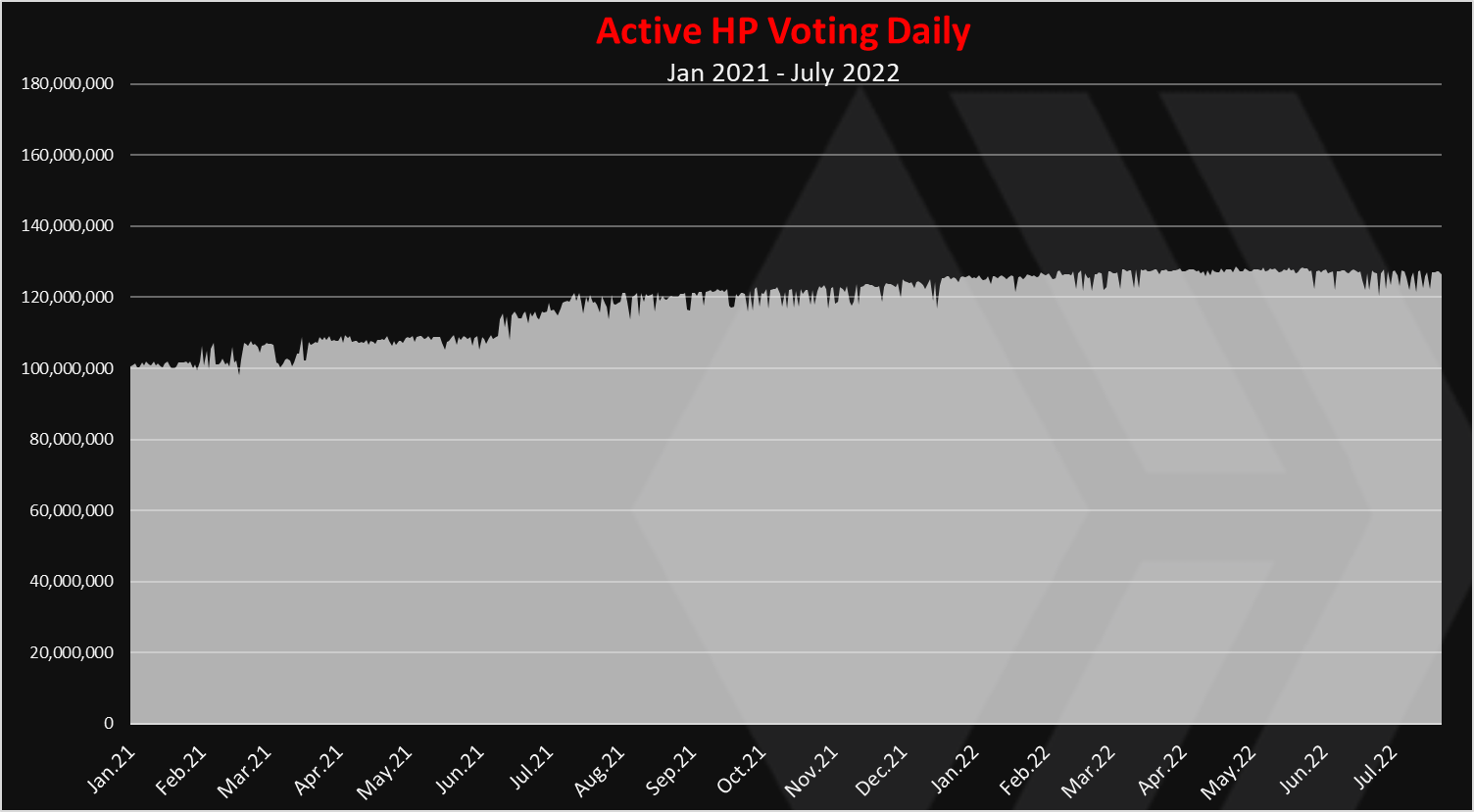 The overall Hive Power has increased in the period, so if we plot the active HP against the cumulative HP in the period we get this. 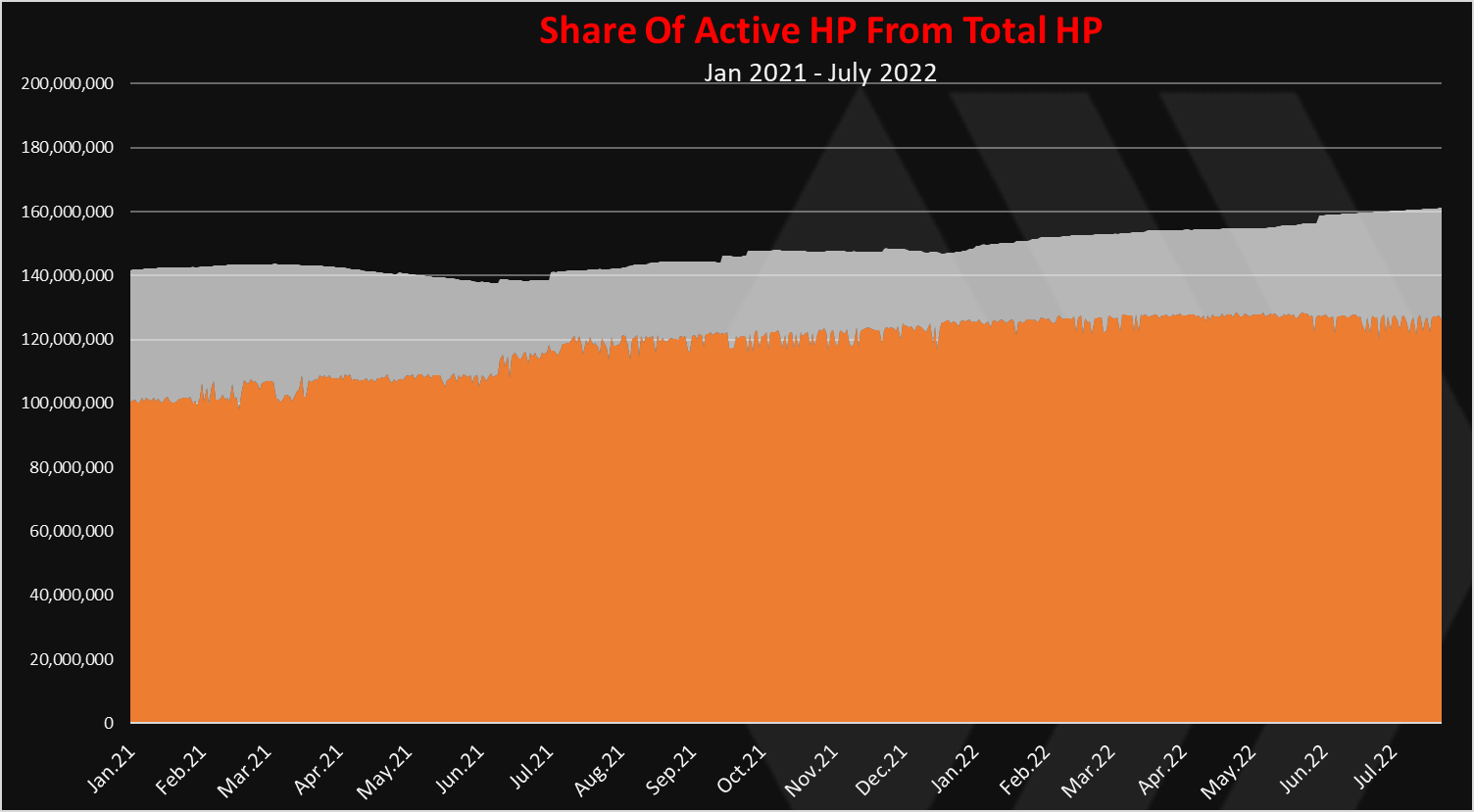 Disclaimer: The way this data is calculated is taking into account the active accounts that are voting per day and assigning their HP balance at the moment. While this is accurate enough, it is not 100% accurate since the HP balance for the accounts can be different in the past from what is now, but there is no easy way to get the data for HP balance for all the accounts for each day. Even if there was such a data it would be quite the process to calculate it. Because of this the data above is not 100% accurate.

I wanted to present the data in easy to understand for most of the Hivers and that is Hive Power. Another useful metric and probably more accurate when it comes to active Hive Power is the rshares.

RShares, or reward shares, represent the share that is assigned to each account when curating, based on which the Hive distribution happens for authors and curators. Here is the chart for the active rshares per day. 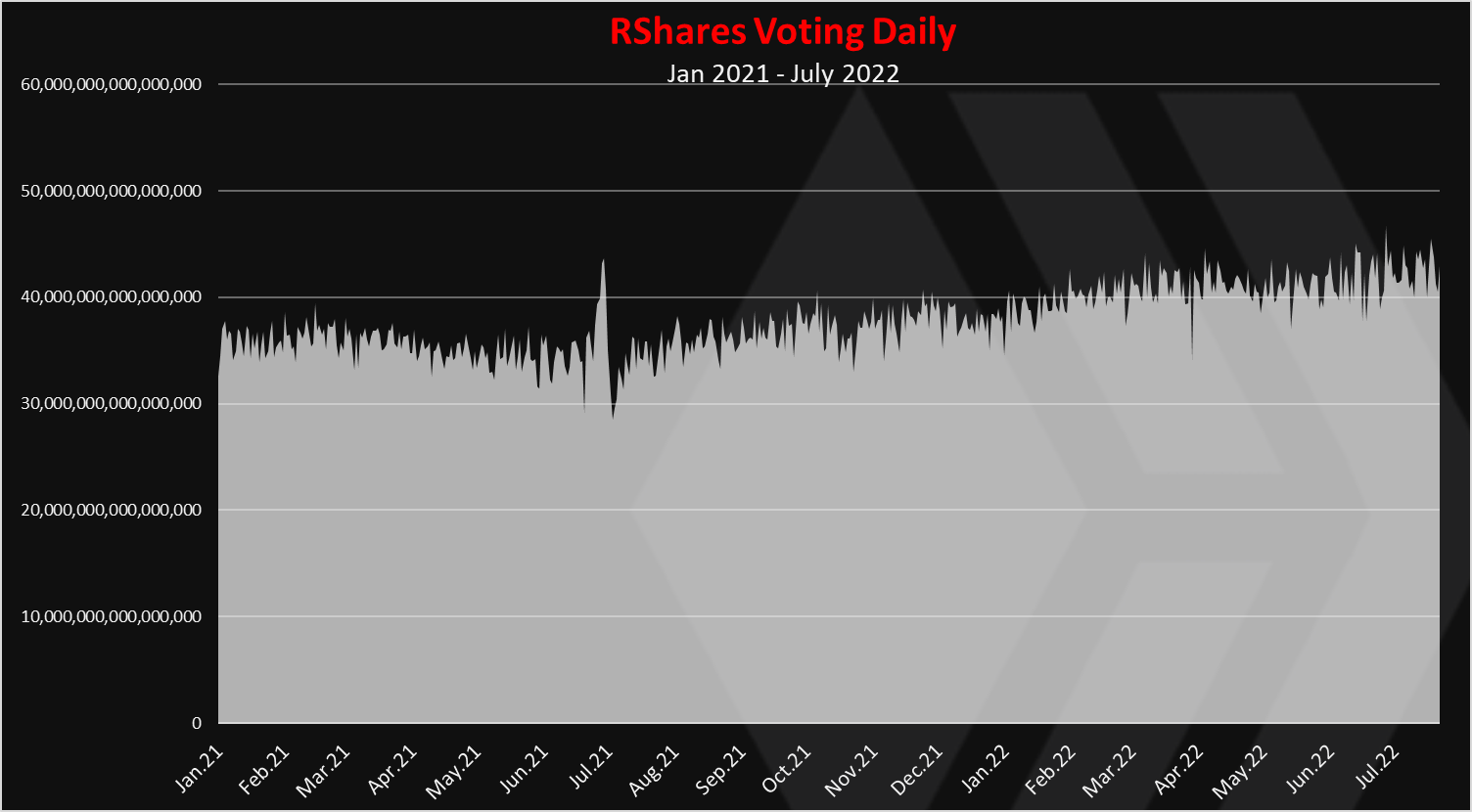 This chart is slightly different from the HP chart and as mentioned is most likely more accurate but the number doesn’t mean much for the average user 😊. It shows an overall increase in the active rshares, without the flat out that we have seen in the active HP. There was a slight drop in the summer of 2021, and since a constant and steady growth.
The number on the y-axis is on the power of 16.

What are the accounts that are not voting/curating. Here are the top ones. 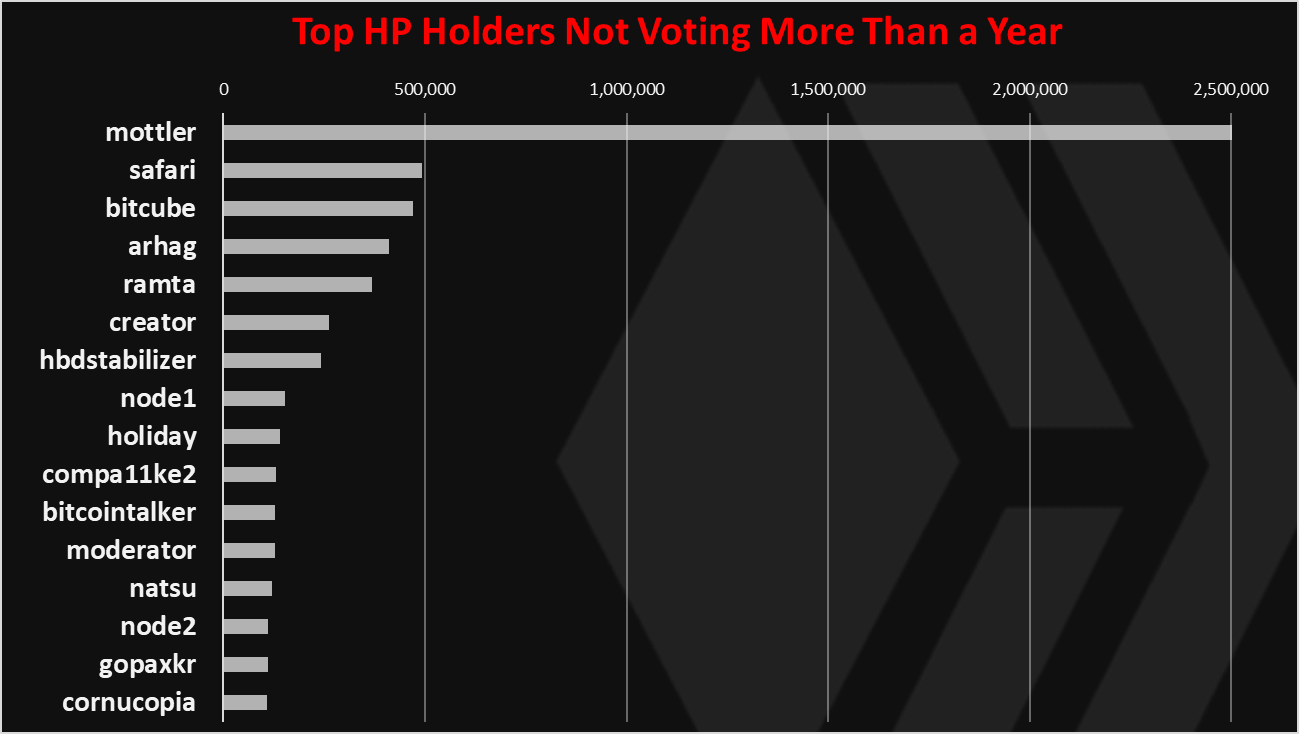 These are accounts that haven’t voted in more than a year.
The @mottler account is leading by a lot with 2.5M Hive Power. This account has not voted ever! Next is the @safari and then @bitcube with close to a 500k HP.

The HP balance of the accounts that have not voted more than a year is close to 30M Hive Power. This represents 18.6% out of the 161M HP at the moment.

From what can we see from the above there seems to be a small uptrend in the amount of active HP, both in absolute and relative numbers. There are around 30M HP that are not been used for curation, and this number is quite constant during the period.

I love to see how mathematics or statistics provide important and easy visual information to reach a larger audience. I already have more than a year on the platform and I have learned little by little some things. However, there are more things that I do not know. I learned after a while of having started, although it was not much that voting is part of the daily life of the hive so for me it was something unavoidable and indispensable. I was surprised to see how the friend who told me about Hive had already been on the platform for some time and had done very well and had not voted even once.

This was not because he didn't want to but because he didn't know how. He tried to do it twice and what he did was send gifts that were hidden from his assets. Although I was more of a novice, I had already understood that it was part of the process and I explained how to do it.

Since then she's been an excellent curator 👏, so I'm still intrigued to learn about these important accounts that don't vote 🤔.

https://peakd.com/utopian-io/@paulag/the-impact-of-unused-steempower-on-the-rewards-pool-blockchain-business-intelligence
This post is getting a bit dated, but I think the information still stands.

When a whale votes, everybody else's vote value goes down.
More big slices of the pie, less left over for the small ones.
Although, it does work the opposite direction, too.
The more small accounts voting the less the big ones get.
It is a tug of war, or dare I say it?
A crab bucket.

I'm so intrigued by what those dormant accounts are used for and who owns them...

For example, there are quite a number of ghost accounts using trading bots on hive engine. Regards.

one interesting thing about the @mottler account, is that it had its funds stolen by the Steem witnesses.

So, they know who it is. It's probably someone's alt.

No, they didn't know - it was "collateral damage" - they just assumed large account, must be taken. It hasn't voted or transacted, it is a mined account. Could have been someone who died.

or they just wanted as much sp gone as possible

Absolutely stellar post!!!! This is some fantastic data magic! Thank you for putting this together!


Why doesn't Voldemort have glasses?
Nobody nose.
Credit: mimismartypants
@dalz, I sent you an $LOLZ on behalf of @cryptokungfu
Are You Ready for some $FUN? Learn about LOLZ's new FUN tribe!
(2/2)
$0.00
Reply
[-]
vintherinvest (64) 2 months ago

Actually, it could be nice to know how many of the accounts that are curating manually, not just using voting trails and so on...
The numbers that you are providing on the accounts not voting, are they including the amounts of HP that they have delegated to others...if they are, their voting power could be used by other accounts?

My all question has been solved. As a newbie it's help me a lot. Ciao❤

This is probably related... I think that was before the pump - @mika account

Yea a lot of people withdraw

Thanks for sharing this awesome information but am still surprise to know that some accounts don't curate posts.

That is really interesting, I wouldn't have guessed it would be that high. I thought we had more idol HIVE than that.

Thanks, always an interesting point perspective.

Yea its growing by the day... HP in absolute number is increasing and the recent one is all active

Hello @dalz Thanks for sharing the information. You present interesting facts.

I would have liked to know some proposal or opinion about the accounts you mention. Or about the consequences of not using this Hive Power.

Very interesting. I did not realize that % was so high.

Thanks for the update...

as long they don't vote your vote distributes more, so maybe it is ok that they don't use it :D

Ohhh Okay... Wow
Thanks for the Info🤗

What a seasoned post.
I tried to understand what could be the benefits of the dormant account. Though this is a decentralized technology people are free in their world.

@mottler probably lost their keys and are burying their heads under the sun to try to forget the lose.

Cant realy tell on that one :)

yap it is an account from 2016 that never did anything on chain. and the value of the account is pretty nice even with this prices.
could be one of those really bad stories of lost keys.

you were here then, so you maybe even know about the account. i had no idea it existed until the robin hood event.

that was a painful accident :D

if i am not mistaken mottler never did anything on the chain from 2016 or something like that. so there is a chance that account is just lost.

i was not sure about freedom but i see that the HP is used by delegation.

Pretty close to what I thought anyway.

This is a very interesting and captivating piece.

I am captivated by the case of the mottler account: if it was the case of lost keys or what. Because being a dormant account with so much HP.... man! This sounds weird! However, if it were the case of lock keys, then it is an example for us to properly guide our keys.

How I wish there will be an option in the registration process that allows you put in your email address so that the document of your keys are sent directly to your email also (in addition to the download and copy option on hiveonboard). I think this may help

Hey @mottler! Feel free to delegate your hp to me :p

What would the advantage be of holding hp and not curating, putting it on a vote trail, or delegating it?

Thank you for sharing some interesting data.
🙏