Get Ready For The Santa Claus Pump 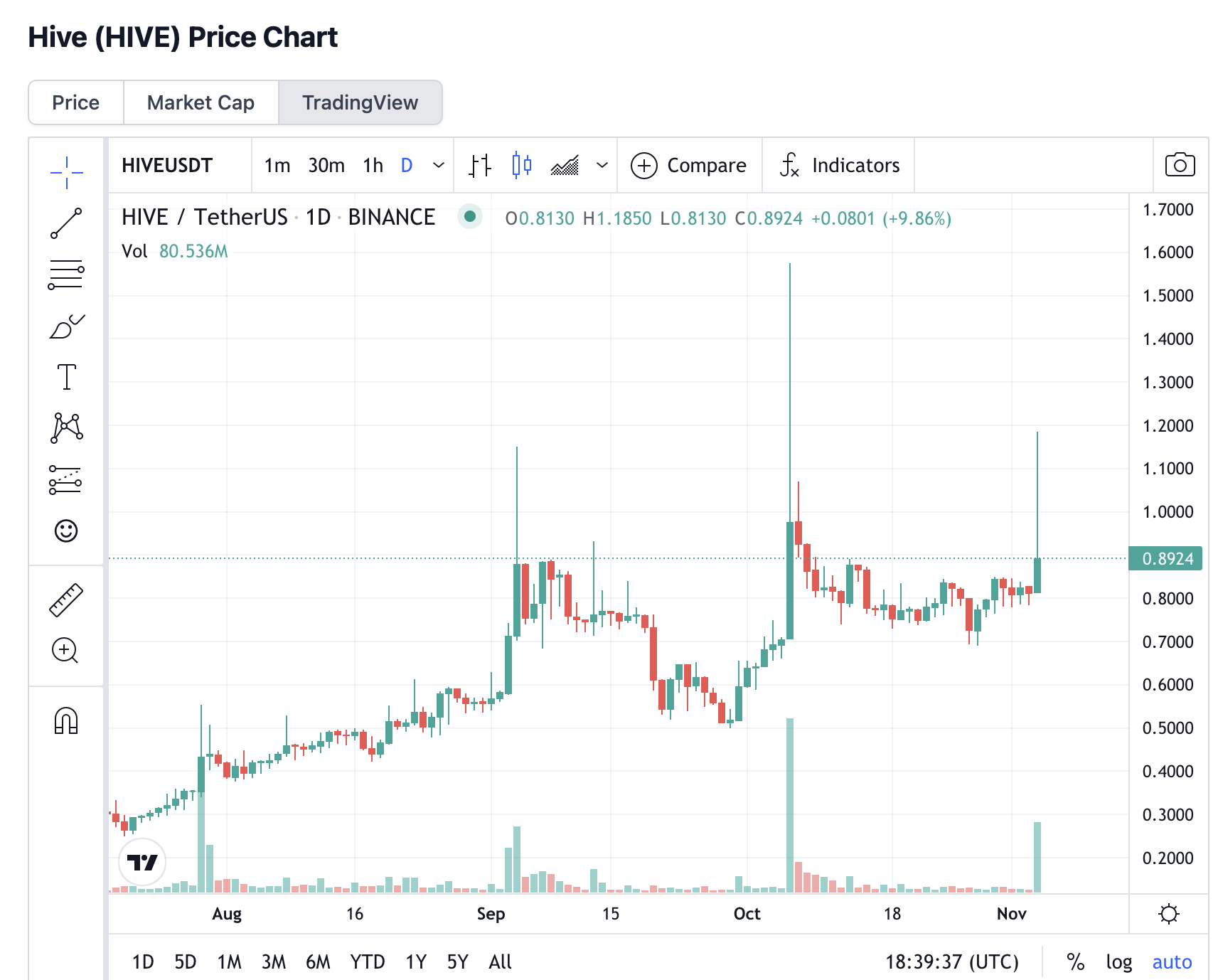 Every once in a while I spend some of the precious time I have here on Earth by looking at crypto charts. Specifically, at the Hive chart. There's a certain hidden beauty in there, carefully concealed deep down the graphs.

For instance, the chart above. You can clearly see 3 big green candles, or, in mundane terms, 3 big pumps and dumps. Let's have a closer look:

As we can clearly see, history doesn't repeat itself, but it certainly rhymes. Each pump was in the first week of the month, almost in the same day. If we take into account that the biggest volume came from Asia, specifically Korea, we can safely say each pump happened every time on a single day (September probably started a bit later and stretched over 2 days in CoinGecko chart, but it was probably just one trading day in Korea). Speaking of volume, the October one was almost as big as the other two combined.

It's kinda obvious that there is some rhythm to this. Every month, in the first week, some whale (or bot, or pump and dump group, or crazy billionaire, or alien trying to infiltrate the world, or time traveler knowing something from the future, make your pick) is pumping Hive hard.

Which makes me believe the next big volume pump coming from Korea might be at the beginning of December. Possibly December 5th, which is also the beginning of the holiday season. Santa Claus, just so you know, if you read this, I behave this year, so it's safe to put me on that list, you know which one.

If this pump will actually happen on that day, I guess we all agree we should name it the Santa Claus pump.

Please be aware that this is not financial advice.

Also, please be aware that Hive can be pumped from many parts of this world, not only Korea, so we may see some other pumps even earlier than that.

I think we at HIVE will have a nice Christmas

It will be interesting to see if that pattern continues. What matters is that $HIVE stays a little higher each time. Would be great to get it to stay above a dollar.

@dragosroua. Any idea if STEEM has same behavior? It will be good to have a comparing graph.

What those pumps mean? What they are signaling. How many dollars need to be burned to create such a pump?.

Or the pumper just make everyone believe prices go higher, make people buy, and then exit as fast as he entered???

I think it happens on Steem as well, but the jump in price is not that big. The volume is pretty significant, between $500 million and $1.5 billion. The theory that the buyer is Justin Sun makes more and more sense. He has pockets deep enough for this volume and he may want to regain control of the forked Hive.

But we don't know for sure. Could be anyone.

It looks like Koreans have a payday on the 1st day of the month and they figured out that with pumping Hive they can get the rise every month.

Oh, and it's St. Nikolas, not Santa Claus, hehe.

Yeap, technically it's St. Nikolas, but it's like the opening of the Santa Claus season, so to speak.

Time for HIVE to be pumped from Metaverse.

Really its a good tactical analysis and almost every year before the christmas a little bit jumped and pumped by the all crypto coin. This time hive hits it time period basis. Let's see how much it could be affect in December.

Chart and technical analysis aside because am not good with them but I can recall first week of last month now that you mentioned how similar Hive pumped.
I sold Hive then to take of needs and few days later I pumped I felt like hitting myself.

I will be observing the price movement first week of December.

Well might be good for trading in other to make a quick profit. I'll keep an eye out and see if I get lucky

Congratulations @dragosroua! You have completed the following achievement on the Hive blockchain and have been rewarded with new badge(s) :