forexbrokr (73)in LeoFinance • 2 months ago 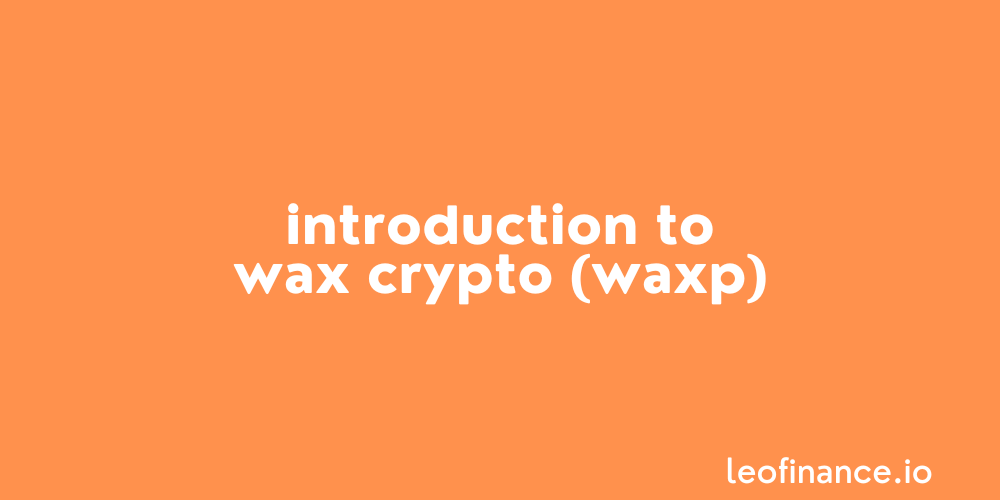 An introduction to WAX crypto (WAXP), the blockchain ecosystem specifically focused on NFTs and the P2E gaming space.

WAX stands for Worldwide Asset eXchange and is a blockchain specifically focused on NFTs and the P2E gaming space.

Not only home to hundreds of thousands of users playing NFT-based games, WAX also positions itself as one of the most eco-friendly blockchains on the market.

In this WAX crypto guide, we take an extremely detailed look at the WAX blockchain and its token (WAXP) from top to bottom.

WAX was co-founded by William Quigley and Jonathan Yantis in 2017.

Quigley is the current CEO of both WAX and OPSkins, while Yantis serves as the company’s (yes, WAX is essentially a company) COO.

In case you’re not familiar with the gaming space, OPSkins is a leader in the industry and already serves millions of customers who have completed millions of trades and purchases on their platform.

Even if you’re not a gamer, I’m sure you’ve heard of Counter Strike: Global Offense (CS:GO).

Well, they’re the company that pioneered selling skins and in-game items over there.

Yeah, having experienced players like this contributing to the NFT and P2E space via WAX is a pretty big deal.

How does WAX work?

Running EOSIO software at its core, WAX bears the same link to Dan Larimer’s thoughts on blockchain governance as we do here on Hive.

Rather than using the energy-inefficient Proof-of-Work consensus mechanism, the WAX Blockchain uses what is called Delegated Proof-of-Stake.

Or simply shortened to DPoS.

Again, if you understand Hive’s governance system of witnesses, you will quickly grasp WAX’s use of 21 energy-efficient guilds being delegated the responsibility of keeping the chain functional and secure.

To use the WAX blockchain, you’ll essentially end up staking WAX for CPU, NET and RAM resources.

We go into a little more detail around resources in the following section of this guide to WAX, but the basic premise is that these finite resources work similarly to Hive’s Resource Credits.

Dictating how many transactions each account and the blockchain itself can handle at any one time.

Using this consensus mechanism, the WAX blockchain can support 500-millisecond block times and zero-fee transactions for anyone choosing to use the network.

Not to mention that by voting on consensus and helping secure the chain, users are also able to earn WAX staking rewards.

This use of rewards is not only great for users, but serves a very specific purpose.

By monetising voting, it incentivises those using the chain to participate in governance and keep the block producers with the best intentions in power.

Again, this process of staking WAX for rewards is something we go into a little more detail in a following standalone section of this guide.

But that’s the basics of why and how WAX’s DPoS consensus mechanism is employed..

Final thoughts on how WAX works

In summary, WAX is not only trying, but they’re succeeding in making NFTs appeal to the mainstream.

By focusing on cultivating their image as a green blockchain, WAX is able to generate mainstream press.

Something that just feeds back into normies using their extremely well branded NFT marketplaces and network as a result.

To say that they know what they’re doing from a blockchain marketing and brand partnerships point of view, would be the understatement of the century.

WAX are masters of this arena.

On the flip side however, their EOSIO backed system of resources is something that has the potential to hold them back from truly reaching their potential.

Only time will tell!

I'm loving WAX now I've got the basics down.

And if it wasn't for GM:FRENS, then I would never have got here.

so many people look at it and hate it because of the resources without realizing we have almost the same thing here on Hive.

if only Hive had the community around WAX.

EOSIO is similar to Hive and I do like the entire system. The only thing that I don't really like about it is that you have to pay for storage. I wonder why that is the case and it doesn't seem to be a problem here on Hive. Then again, it's possible that we might have to read all the history to get back the NFTs.

Hive's Resource Credit system is much simpler, isn't it.

Stake 1 token (HIVE) to receive the 1 resource you ned to transact on the network (RCs).

It's interesting that Larimer created EOS after Hive (St**m) too.

Seems to have gone backward from a technical usability point of view.

Wax focused in on a market that was starting to naturally find itself and that was NFTs and Gaming. Instead of trying to alter it and charge direction it adopted it and now when you think gaming pretty much wax comes to mind first. These others on Ethereum etc are so expensive, gas heavy and down right I find annoying and I tend to want to stay away from myself exclude many people.

Wax also has awesome marketplaces and UIs that make it easy to understand, use and grow both as a player and as a developer.

As for WAXP and Ethereum I haven't messed with that at all yet and have only stuck to staking some of the wax itself and voted from there to earn a decent APR on WAX.

Wax to me is much like how hive works however wax has a ton more UIs in place and a massive amount more development happening. Which makes me think if Hive buckled down and started building some of these front end things it would explode in value.

Yeah Hive could be in the same place given the right devs and projects.

WAX's system of staking for network resources is key for games.

Heck, it's key for anything normal people want to do.

You will never gain mass adoption by charging people fees every time they make a click and transact on the network.

No matter how cheap they are, you'll never break the psych barrier of being charged fees.

As for the comparison with Hive, I'm as frustrated as you.

Hive's system of simply staking HIVE for RCs is a MUCHHHHHHHHHH simpler system than WAX's CPU, NET and RAM.

Yet WAX is miles ahead all due to marketing, development and partnerships.

I think it's a bad timing to introduce wax right now. WAX is still having an issue and I'm still waiting for #tech-updates in wax discord. But, IMO It's a good one after HIVE. I'm active in WAX and HIVE. I had an experience with BSC and ETH but after I met HIVE and WAX, I prefer HIVE and WAX rather than BSC and ETH. 👍

I think it's perfect timing to get people educated about WAX. I've been using it for years and play games on it daily.

Never had an issue with it myself, what are you having?

It's already solved tho

Interesting. I didn't have any issues doing a shit ton of transactions yesterday. Thanks for letting me know

Sure 👍. For me, the transactions were done around 20% or after I tried it around 3-5 times 🤔. Even TAG (The Adventurer's Guild) got that issue too... It's like a few hours I stayed to not doing any transaction if it's not urgent.

Yeah, do you mind elaborating on the issue that you're referring to?

It's already solved tho

It's just your post and the issue on the one same day 😅 That's why I said, "bad timing". It'll be good if it's on another day like today. Sorry for that 🙏

(Save me from running it through a translator and translate your reply for me first?)

You're definitely not alone there.

WAX's system of resource credits is definitely confusing for new users and something they need to make easier for true mainstream adoption.

But once you have a bit of WAX staked for CPU, NET and RAM, then everything else from there is super easy.

If you genuinely like branded NFTs, then I'd recommend persisting in trying to learn resources.

Once you get the hang of it, WAX is great.