Miners play a major roll in the bitcoin network, but they don't actually control as much as you might think...

Based on the headline above, you likely know that miners hold roughly 10% of the bitcoin supply.

This is known miner wallets by the way.

However, there is something very interesting to take note of regarding those holdings...

That would indicate that miner wallets are only holding about 70k BTC total, and that includes all of the mining pools out there.

A graph of the data can be seen below: 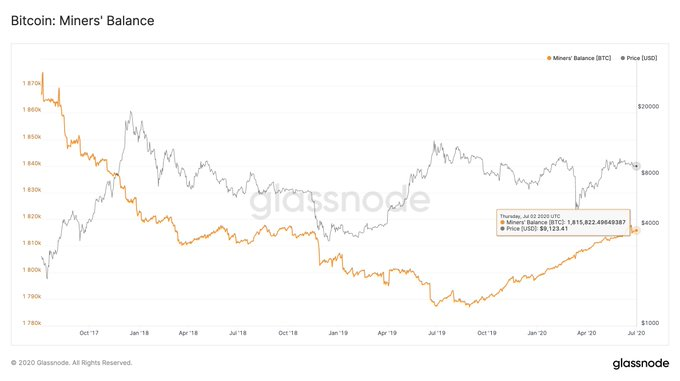 What can we glean from this?

Based on the above information we know that the amount of BTC currently being held by known mining wallets is actually fairly smaller.

Much smaller than the initial figure showing close to a 10% ownership.

Looking at the above chart of the data, we can see that miner holdings have basically been trending down for much of the last several years.

In fact it only recently started trending back up starting end of 2019 and throughout 2020.

This may indicate that there are miners that have been holding in anticipation of another big move up.

The data on the chart above mostly only shows a bear market and a sideways market and possibly the start of a bull market.

Extrapolating out, one could possibly suspect by their actions that they are anticipating a bull market rally in bitcoin in the near future and have been increasing their holdings accordingly.

This is yet another feather we can put in the bull market cap.

As it stands right now, that cap is starting to get rather full of feathers...

As the halvings continue it will become less and less as miners are forced to sell to cover costs but then as time goes by velocity of transactions will improve! All part of building the ecosystem the system is doing exactly what it’s supposed to be doing

Possibly. Though over time the difficultly level will keep adjusting and the break even price will always eventually be around the current market price.

10% is huge %. Especially when it's not for HODLing but ready for sale any time.

Yes, but did you read that of that 1.8 million, roughly 1.73 million are held in miner wallets 7+ years old... and it hasn't moved. That likely means those wallets are dead wallets or at least very very strong HODLers.