Don't Miss Out On Your Personal Planet NFT In eXode!

khazrakh (67)in LeoFinance • 2 months ago

I've been covering eXode ever since I've stumbled across the game back in March of 2020. I've read the game's manifesto, took part in every single testing round, and even hosted the Baldie Challenge. When the release of the actual colonization gameplay was announced last week, I went into full hype mode. But no matter how much I was looking forward to anything new coming to eXode, when people asked me whether they should already join the game or wait for a while, I was always cautious. So far, playing eXode was more like touring the site where the cake factory was about to be built rather than eating the actual cake. There are people that enjoy to be part of the journey, but others want to play the actual game, not help to (pre-)alpha test, suffering through waves and waves of bugs. This is about to change right now, though. You absolutely should get on board right now and you totally need to pick up eXode this Tuesday! Let me explain why... 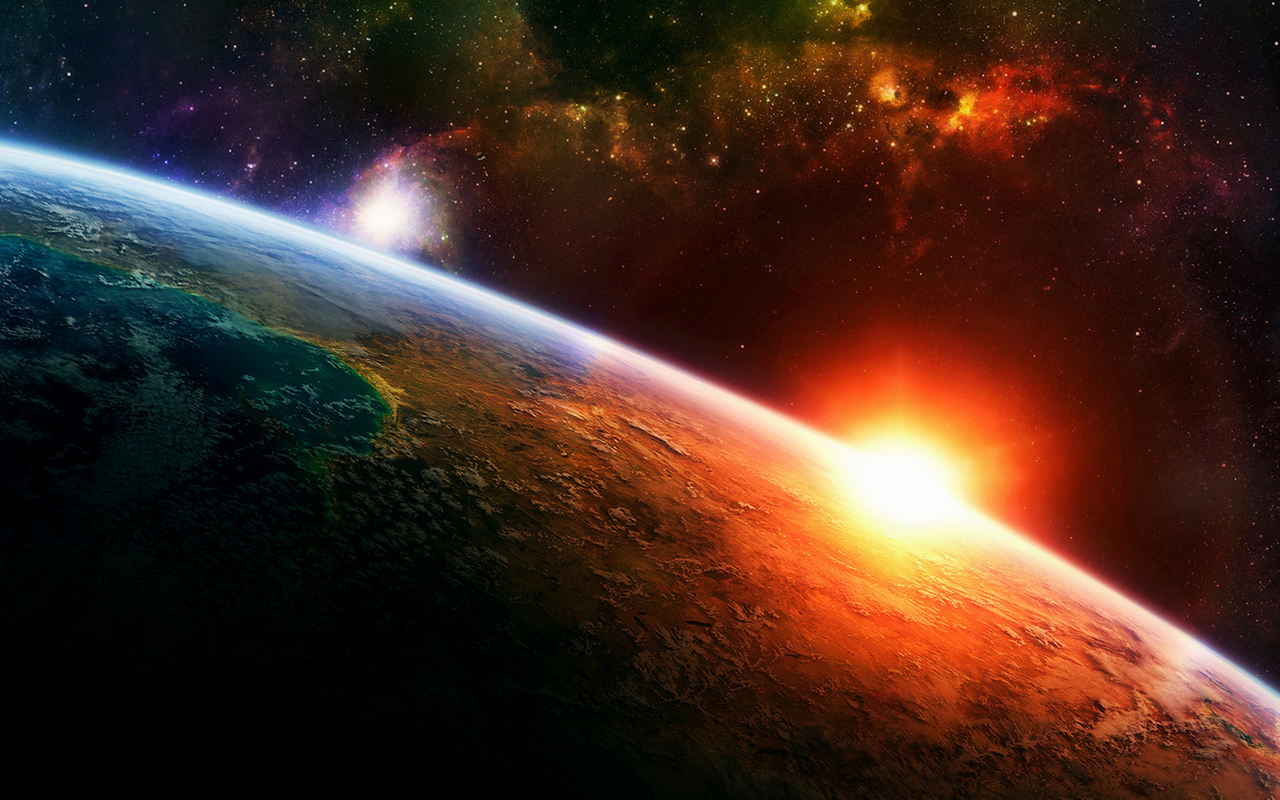 So what changed? Why now? Well, what @elindos just announced in his newest post is a real game changer! This Tuesday, step one of Colonization is about to begin. We'll be able to play through the whole scanning experience, assign our crew to fulfill different tasks, inspect planets, repair our ship, and (hopefully) successfully land on the planet of our choosing before the aliens get to us. That's where step one is going to end, but step two (and many more) is bound to follow soon after. There's more to it, though, and that's the big news! Every Captain that will take part in that first testing round will receive the planet he landed on as a NFT, permanently bound to his account.

This planet will serve two distinct roles. For now, this will be where testing the actual colonization gameplay will take part. This is actually a pretty neat idea, because it will keep the real game fresh and mysterious until the start of the first real season. Each player can reset his planet as often as he wants to in order to test all the different features that will be added to the game in the coming months. This way we'll be able to test everything as much as possible without already knowing 100 different planets after testing ends. But once testing does end, this planet NFT will give permanent bonuses to each captain owning one. What these will look like exactly is yet to be announced, but from the information given away by @elindos, it sounds like the planet will work like one of the presale contracts.

These contracts provide their owner with a weekly drop of fresh NFTs unique to their very own loottable. All the contracts where only available during the pre sale and the only way to get one now would be by buying one of the market. With prices currently starting at around 80$, that's not exactly a cheap endeavor. With your planet NFT, though, you could gain your own weekly drops just by playing the game next week! As this NFT will be yours to keep, providing bonuses for live, this is a great way of getting a headstart in the game!

I really like the whole concept and I'm once again positively surprised by the creativity of @elindos when it comes to creating value for his fellow Captains. Just as with all the different competitions we've had so far, this is a great way of rewarding players for being around and helping test the game. This also is something that I expect to keep seeing for eXode's forseeable future. Rewarding players just for playing is one of the game's key concepts and one that I think is really cool. There obviously always will be booster packs, contracts, and what not that you can buy from the game's shop or from the market. But there are also those rewards that you can simply (and only!) earn by showing up, by playing the game.

At the same time, it's important to understand that these planets are no going to provide an unfair advantage in the later game, they will in no way be mandatory. Just as with everything else, you only ever will need to buy an Origin (the starter pack) to enjoy eXode to it's fullest.

So if you haven't joined eXode yet, now is the best time to do so! As I mentioned above, all you'll need to play the game is one of the three Origins sold in the store for 10$ each or 20$ if you get all three. If you join the game or already joined it but still lack some basic cards, just leave me a comment here or get in contact with me over on Discord and I'll provide you with some weapons for Evacuation and some prefabs for Colonization. It doesn't matter if you used my ref link or not, I have a lot of these cards from my contracts and I'm happy to share them with the community!

Talking about community - there's already a ton of amazing content out there that will help to get you started on your journey. You absolutely should check out these video tutorials made by @slabakbg if you need a place to start. On top of that, I'm sure we'll see a lot of community content covering everything you'll need to know in the coming days, so keep an eye open for more eXode content coming soon. I for one am super excited for all the goodness that's coming in the next few days. I still can't believe it's finally happening!

And that's all from me for today, thank you all for reading and see you on the other end of the galaxy Captains!

Ah the rush is here. I might have to start trying the setups he mentioned so I can actually land on some of the planets to claim these planets.

Certainly not a bad idea to come prepared... :D

Excited to do my first play through of this game with my cards here in 48 hours roughly! I did try out some of the test server stuff to kind of get an idea.

Really excited myself! So far we've only played the separate demos - it's the first time that everything will be connected!

I just signed up under your referral. Thanks for the heads up. !LUV 1

Happy to have you :D
Sent you some cards to get you started!

I had this game on my checklist but I had no free time to learn about it.
Finally today I found some time and I read some of your articles also @elnidos announcement.
I decided to buy the package of three origins, I signed up from your ref.
Now I'm trying to understand what should I do in the game.
To be honest I have no idea what I should do but I hope after some exercise to manage to play the game right.
I would appreciate to give me some tips for getting started as well and some nft cards.
!LUV 1

Glad to have you, will send you some cards right away!
To be honest there are way better players out there than me, so it's probably best to check the video tutorials I linked or check with the Discord for more tips on the game :-)

Thank you for the cards and for your answer.

You got a new referral! And I will bug you on Discord, for sure... :)
If you have some easy, fast beginners tutorial, I will be grateful to read/watch it :)

That's great, welcome to eXode!
Just sent you some cards to get you started.
For starters, you might want to check these tutorials here: https://www.youtube.com/channel/UC3pbbC8mykLNibETAHa54OA
Keep in mind though that we are all noobs here, the game is just about to get started after all :-)

Followed that YT channel and watched few videos... That already seems a step forward to noobs... lol... I will dive deeper into FAQ and Wiki... I missing probably some important things...

Do I need to do something special "before the launch"? I have tried those DEMOs, passed with -300 points... lol... :D

Haha don't worry about the points, all you need to do for now is get out of there alive ;-)
You don't have to do anything special for now. All you have to do to claim the NFT is finish Evacuation, find a planet you like, and successfully land down there!

All you have to do to claim the NFT is finish Evacuation, find a planet you like, and successfully land down there!

The only thing... :D I have done that, (maybe), but I have no idea where can I later check that I have really done that and it's "noted" somewhere... ANyways, will poke around...

I have been putting it off and have asked you a few times before in the past, but I think the time is now!

@khazrakh you have convinced me enough. I will be signing up under your ref and finally getting into eXode. Will let you know on Discord and maybe you can please hook me up with the relevant cards to get started. Have you published a getting started guide for eXode before?

Hey mate, cool to have you with us finally! I've just sent you some guns and colonization equipment to get you started.
Didn't make a getting started guide so far, will have to figure things out myself tomorrow ;-)

I'm so excited to get what is essentially a contract! I've never had one before!

I guess many didn't, another great move by elindos!

This is really cool and I'm also looking forward to it greatly.

One thing that is not clear to me is whether you need to play more evacuation games now to have a good selection crew etc for the settlement phase.

For example, I've recently got a Kumicho which hasn't been played in an Evac.

DO I need to play a successful Evac with this card to be able to use it in this next phase?

You play scanning after you finished evacuation - so you only get to use the individual cards that you used for your Evactuation I'd think.

Thanks for your offer. I sure could use one weapon and some of the pre-fabs. Seems my packs were light on these.

Much appreciated. And a great article to boot.

Just got you your cards - welcome to eXode :D

Thank you very much. I appreciate the help. Looking forward to tomorrow.

Sorry, with more LUV in your wallet, you can give LUV from the bot daily, for free. Get more LUV at https://tribaldex.com/trade/LUV