Terra and Cosmos IBC linkup by the end of October!

Terra (LUNA) is the 11th largest cryptocurrency by market cap (according to CoinGecko). Cosmos (ATOM) is 21st on that list.

Terra is built with the Cosmos SDK framework and Tendermint consensus engine and as such is already part of the Cosmos ecosystem of blockchains that are built on this technology. However it is not yet connected to other Cosmos blockchains through the inter-blockchain communication (IBC) protocol. This is about to change.

Proposal 128 of the Terra governance system is to enable IBC transfers. The proposal was submitted on 7 October and voting completes on 21 October.

As can be seen by the details below, currently 100% of voters have approved the proposal and all thresholds appear to be met. That looks like a go! 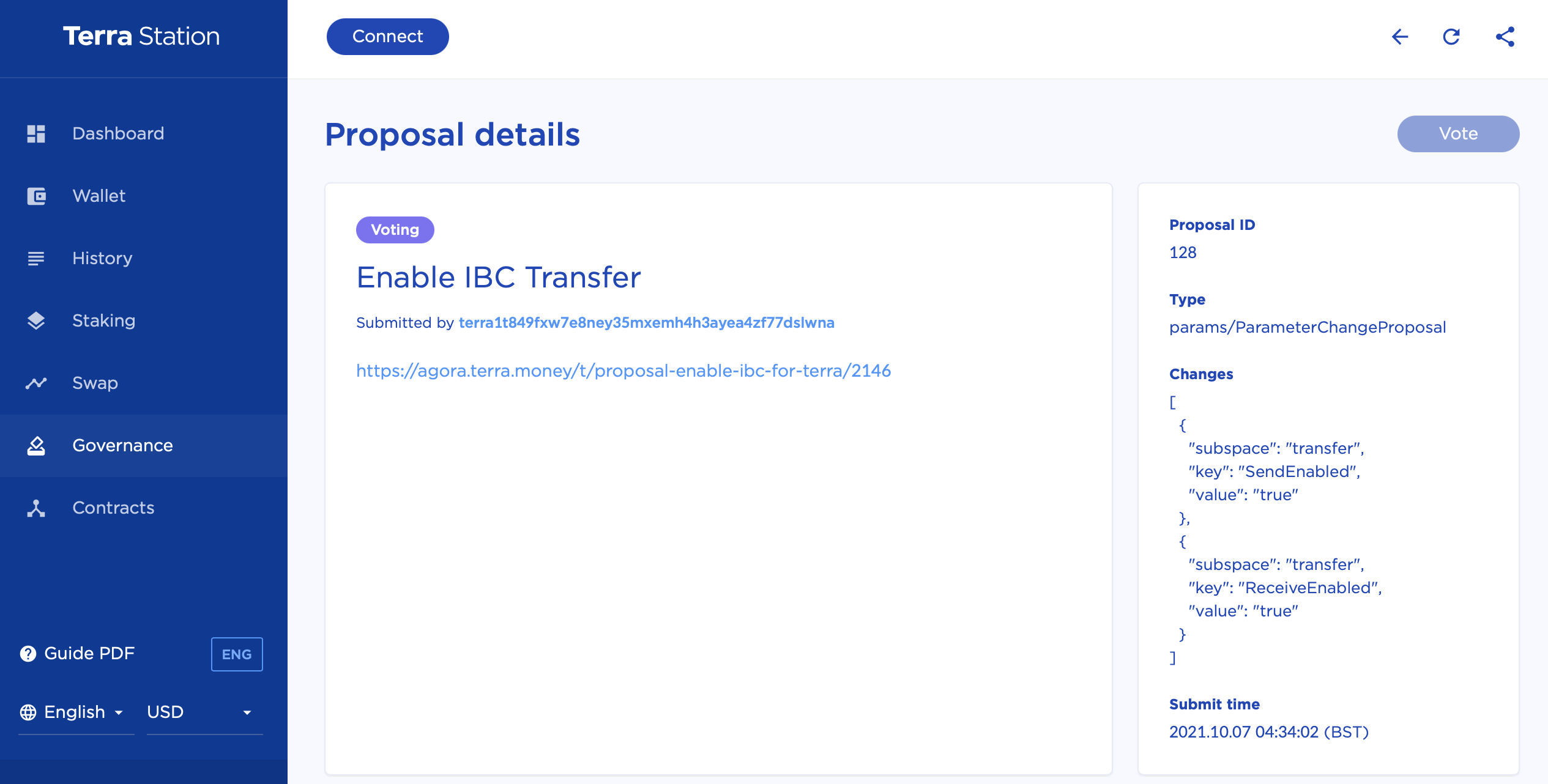 What does this mean for Terra and Cosmos?

Terra and Cosmos both have significant communities. I expect this linkup to generate a fair amount of noise and hype from each side.

The link may well be complementary rather than competetive. Terra specialises in stablecoins such as UST, something Cosmos lacks, as well as synthetic assets. The strength of Cosmos is in its structure: a scalable ecosystem of blockchains linked through fast communication. The diverse applications of this ecosystem could bring a whole new audience to Terra and increased demand for its assets.

The marketcaps of the two host coins, LUNA and ATOM, have grown rapidly this year as interest in these ecosystems has grown. There are new projects launching, yield farm incentives rocketing in a quest for liquidity, and airdrops arising.

To me, this feels like similar to Solana earlier in the year and Avalanche a couple of months ago. However with the general crypto market at a much higher level in its cycle, good opportunities are hard to find. I'll be hunting around over the next few weeks to see what looks interesting.

I saw reference to UST pools and what shape they should take in the proposals on OSMO a while back so I've been looking forward this.

I'll defo be pooling some UST or TERRA with whatever asset on OSMO when it comes along.

Big fan of Osmosis, so many decent pooling and staking options and super cheap fees too.

And I like TERRA too, although I've yet to get around to staking some UST, it's on the list!

This is good news!

I think it's all positive! I need to take an inventory of all the projects and farms in those ecosystems and see what's worth buying / farming.

Juno sounds interesting: interoperable smart contracts! I need to get my head around that idea next too.

For COSMOS atom.i am waiting for this coin to move more this year. For Luna I have not use it for transaction.
If both of them match together,I don't know how far they can move.
Thanks for the information

I am not sure whether the two host coins will run up. They have both gone up a lot already.

But I will be interested in looking at projects emerging from the ecosystems. There are lots of blockchains and lots of projects on those blockchains that I need to investigate!

Ah nice! I missed this news, thanks! I suppose there is little point in me going to vote now, it looks like support is nearly unanimous!

I think it will pass! It will be interesting to see how quickly it gets implemented once the vote is done.