A Few Thoughts on the Bitcoin Price...

revisesociology (78)in LeoFinance • 10 days ago

Governments rely on control of the money supply in order to control the global economy and maintain power.

They printed a third of it in the last two years, aka Quantitative Easing, and clearly a lot of that got spent on or leveraged into Bitcoin.

And then, probably just because of fortunate/ unfortunate timing meaning the golden age of DEFI coinciding with all that free money being printed, BTC and crypto more generally offered some great returns.

And then the bubble burst (surprise!), and now that governments are putting up interest rates and squeezing the money supply, people are selling out of higher risk assets and Bitcoin as the returns don't look so great anymore.... so the sell off accelerates... 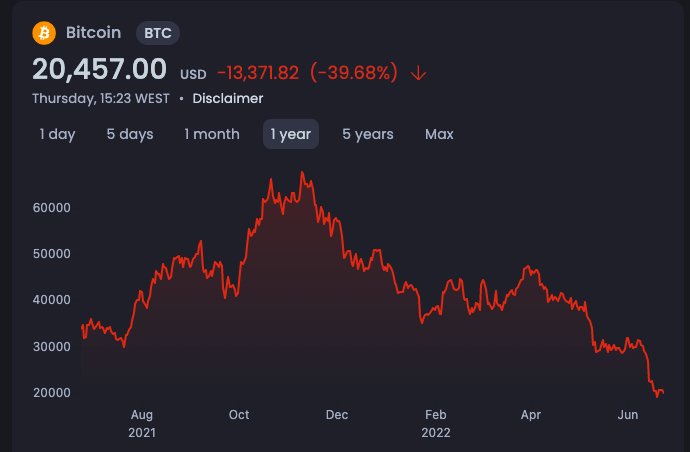 But let's not forget that one massive advantage Bitcoin has over FIAT currencies is its fixed supply, and it's fixed and now VERY limited rate of inflation, with < 3M out of a total supply of 21M yet to be printed.

This means that holding BTC is basically a hedge against the value of FIAT money, which, let's not forget has genuinely gone down in value over the last couple years.

And, frankly, there's little sign of the global economy picking up anytime soon, the global capitalist system was already fit to burst before Covid and now with normalisation of three nations happy to be involved in overt military imperialism - Russia, the US and China will probably wade in soon.

And Bitcoin is a stand against all of that - it's a currency which just works outside of the banking system, a currency that no one can devalue by just printing more of it.

Of course Bitcoin is more than just an anti-government hedge, it's also an asset class which people speculate on - and OBVIOUSLY that's how MOST investors see it - hence why it's an easy sell...

More and more people see there as being more potential to make money elsewhere (stocks/ art/ whatever) or at the very least, they see selling it into stables as a means to not LOSE more, and I imagine there's a fair bit of shorting going on ATM.

And in terms of seeing BTC as an investment vehicle, there is a slight problem - it doesn't, like stocks, represent a share in anything tangible - unless you count 'anti-government-fiat-sentiment' as have a value (which I think it does, but valuing it is pretty much impossible) - hence why it's an easy sell, faster than stocks which do tend to represent something tangible...

But I don't think comparing it to stocks is fair, it was never designed to have that function.

This is something to think about... now that the crazy DEFI bubble has burst, and the 100% yields are over, what is the 'underlying' status value of BTC...?

There are plenty people who are rich enough to hold onto 1 BTC at $10 000 just for the sake of holding BTC for example, even if it doesn't offer much of a return and is a risk, and once it hits that point, it probably isn't going to go down much more....

And I can't help but have this feeling that a lot of people are shorting BTC to try and either pick up more or skim off a few dollars on the way down, I mean I am, so surely many other people are!

The last 12 months has maybe seen mainstream money come into BTC and pump the price, much of which has now left, it will be extremely interesting to see where the die-hard hodlers' floor is... that average value at which hodlers just say 'NO' not selling at less than this thank you very much...?!?

Bitcoin is a highly risky speculative asset nothing more. It has never been in an environment like we are going into ie inflation and higher interest rates on top of recession, cost of living crisis, war etc. The table is going to turn i feel, i been saying it for a while now. Bitcoin only surprises. It has sucked in a massive amount of get rich hopers thinking its a sure thing. They are all going to get wrecked, crypto is in for its .COM moment. Unless your time horizon is 10 years and you dont need that money for anything your going to get liquidated one way or another.

Quite possibly, I'm glad I've been able to take something out over the last year at least!

Unless your time horizon is 10 years

I suspect many people who bought BTC didn't really care what it was. They just wanted in on something that was predicted to gain value. Many may have lost money recently, so they will move on to the next trendy thing.

This bear market season has just revealed to me that Bitcoin is not ponzi that is a get rich quick scheme. It has also enlightened me never to invest in what I do not understand.

As you rightly put it the fixed supply, and it's fixed inflation rate is our biggest advantage over the chaotic traditional economic and financial system, things may get very difficult within the cryptocurrency market in the following months in terms of price action, more however, statistics reflect that more than 50% of the large holders would not go into losses and this is extremely encouraging for the health of the market.

I know what you mean - I'm sure there's a psychological limit below which people just won't sell - it's not as if any of those large holders need the money anyway.

This is something to think about... now that the crazy DEFI bubble has burst, and the 100% yields are over, what is the 'underlying' status value of BTC...?

To be fair, you can still get 10% on your BTC at CubFinance lol:

As shit as the price dump for long term HODLers has been, Cub still offers one of the best ways to earn yield on Bitcoin.

How do I know Cubfinance is not Celsius 2.0. Where are those yield coming from? sus

I'm certainly not saying that CUB's model is sustainable as is (just look at price...), but to compare it to Celsius is unfair.

They each run completely different business models and as such have unique sustainability issues.

If you're genuinely interested in where the yields come from, I'd encourage you to dig a bit deeper.

There is a pathway to sustainability for both if things are done right.

I am in that Kingdom in fact, it's a good place to be.

I imagine Cub will pick up again at some point - when the Leo folks get bored of waiting for PolyCub to do something!

come on man and anyone who will take the wager.. i'm calling bitcoin at $1000 come january 2023.. i'll offer 500 hive to anybody who got the balls and not mouth to take the wager?

Instead of betting against us morons, why wouldn't you just short BTC on leverage?

You'll make a shitload more money and won't have to hold 500 HIVE all the way down to pennies.

how do you know i'm not shorting bitcoin?

Maybe this will clear things up for you.. maybe i dont need any money.. maybe i got everything i need.. Perhaps i get more from proving you guys are dummies, lol.. you ever thought about that?

here's some interesting information. if i were a billionaire.. do you know i'd live on the same land i live on now.. i already think it's a paradise.. do you know i'd drive the same vehicles i drive. now.. i'm already a pretty darn good looking guy.. so i date models as such already. maybe the greatest gift for me right now is just proving you all are dumb lol

no not sad, maybe it's time to turn over a new leaf and remove ourselves from high risk speculative investments.. wouldn't you rather have a consistent dividend of $1000 per month you could go and risk on these risky investments if thats what you wanna do and give other people a chance to take $1000 if they wanna use it for gas or to feed their families.. wouldn't that make more sense than destroying all this money in this bout of nonsense and pyramid schemes gone wrong? have you all not had enough of that yet? lol

Totally agree.
A baby 75 basis point was enough to send BTC to below 20k, now imagine.... with the current downturn trends in the market , one just wonders if bitcoin might break through the resistance or not .