Beware: Trad Markets Move Against You While You Sleep

I wanted to share an article today that argues for one of the most important tenets I've recently been clamoring for - transparency in financial markets! One of the reasons why I prefer crypto to the traditional stock markets these days is that at least you know you have equal access. Yeah, you might not be able to buy that hot new token if your don't know the right people. But that insider knowledge stuff blows up in people's faces just as much as it sometimes benefits them. At the bare minimum, you know that the blockchain is open 24/7 for trading and repositioning your portfolio.

In the traditional world, you get 4-9 hours per day (depending on which country you are trading in) to access financial markets. During these times that retail traders cannot trade, whales and institutions access unique dark pools and after-hours venues to continue trading while Joe Public is off for beers and an early night. In both arenas, you have insider trading and insane monetary inflation to deal with. But at least with cryptocurrency you have 24/7 access to these movements. Just like anybody else. 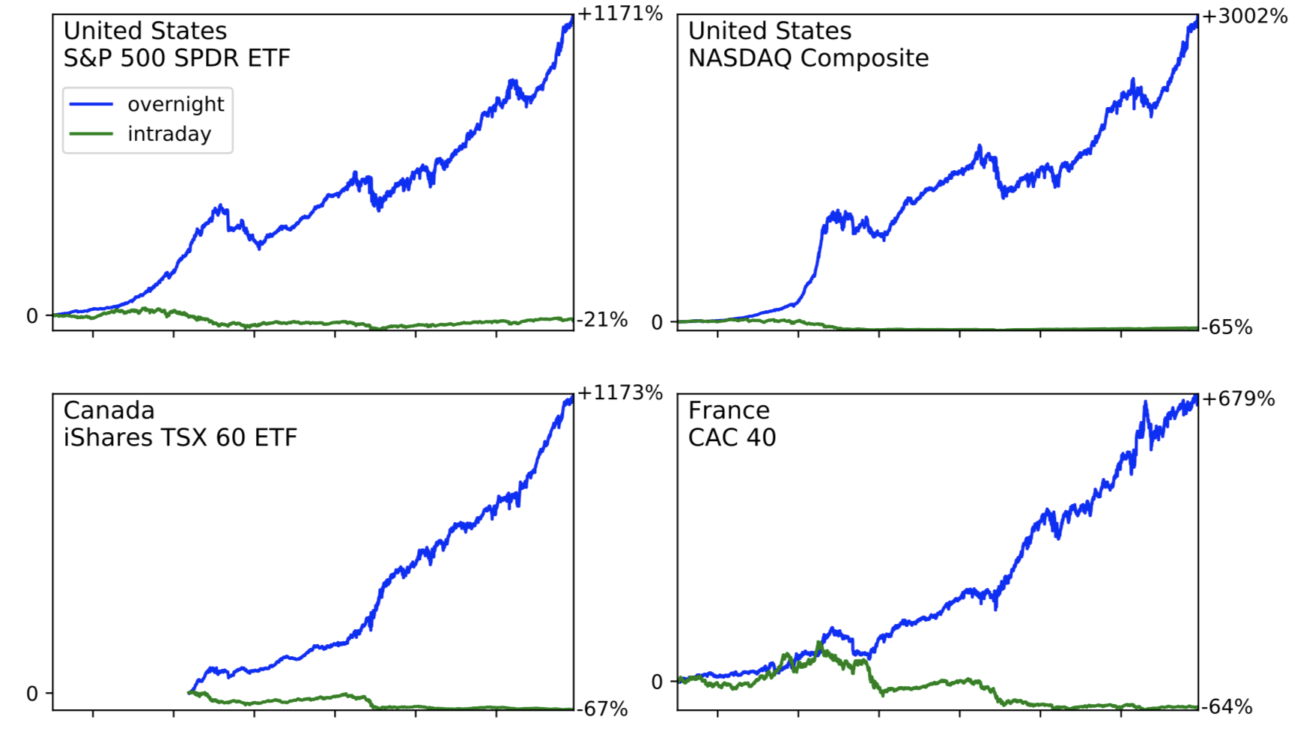 A recent CCN article highlights a horrifying trend. After-hours trading in the S&P 500 has generated almost 600% gains over the long run while intraday gains have been virtually nil. This dataset goes all the way back to 1993. And it's not just one country's market. It's all of them. The pattern has been observed in the US, Canada, Germany, France and Japan.

To me, the answer is clear:

The game is rigged.

Makes you wary of day trading too much, no?

I'd actually never heard of after hours trading on the stock market, that's quite depressing to read. All my investments on the stock market are for the long term however. With most of my other money sitting in real estate and crytpo. I'm definitely leaning towards short term trading on crypto though. Mostly because it's becoming quite fun.

Very few crypto projects, I would say, are for the long term. I have my favorites that I write about here. But beyond Bitcoin and Ethereum, I wouldn't recommend anybody too HODL crypto if they don't plan on paying attention everyday. You never know when an epic crash will come. Of course, it works the other way as well. Some days the whole market just goes up 20% in a day for the strangest of reasons. Whee!!!!

Very true. I've never held ETH but I would agree that it would be well worth HODLing some.

Hi @shanghaipreneur, you have received a small bonus upvote from MAXUV.
This is to inform you that you now have new MPATH tokens in your Hive-Engine wallet.
Please read this post for more information.
Thanks for being a member of both MAXUV and MPATH!