uyobong (75)in LeoFinance • 9 months ago

Over the last two weeks since PolyCUB was created, I finally had a clearer and broadened picture of the PolyCUB economy as well as seeing the future of the creation after reading this article. It is very profound to see the innovative position that https://polycub.com/ takes on the DeFi world. Leading the race in yield optimization and becoming the first DeFi project with a long term goal of giving mouthwatering rewards to investors.

The comments section of that post contained some revealing facts that should clearly convince any crypto enthusiast on why PolyCUB should be included in his investment portfolio. @malopie started the deep conversation by highlighting how Xpolycub regenerates income, helps an investor to get a loan which is paid back from the Xpolycub vault. @khaleelkazi then sums it all that PolyCUB is pioneering the implementation of Self-paying collateralized loans.

With that, it is imperative that a PolyCUB investor loses nothing. The systems allows for "value accrual" that keeps bringing back value to xPOLYCUB hodlers. In fact, this is making DeFi more sensible and indeed, it is one development in the crptoverse that is still very virgin. I'm excited that the LeoFinance community is pioneering this aweseome development and that pitches Hive blockchain in a relevant spot when it comes to DeFi delivery.

Truly, the success story of the PolyCUB DeFi cannot be be completed without a mention of the committed long-term minded LeoFinance community on the Hive blockchain. Indeed, it wows you how serious investors are taking the PolyCUB project and indeed, we see the rise of another Bitcoin in the DeFi space, and that's PolyCUB.

Imagine the surprse seeing screenshot below when @gualteramarelo flaunted his $60k worth of xPolyCUB stake only to be replied by @onealfa.leo's $354k xPolyCUB stake. Indeed, these LEO investors are not here for a joke. Certainly, one would do much more with the antecedence that LeoFinance developers have set with their products. Form LEO to wLEO, CUB to PolyCUB and the many lofty products expected in the near future. 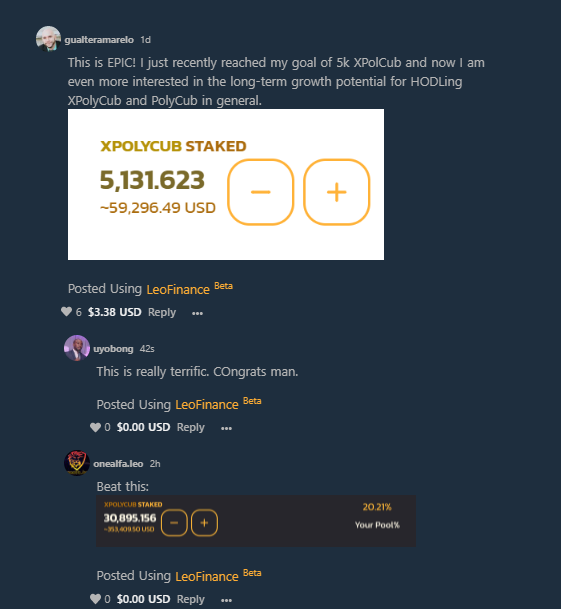 I certainly won't be staying behind. It's time I set goals for myself as it has to do with PolyCUB investment. I can't just afford to miss out of the wealth mill that has been created. I have been accumulating $CUB and staking them to get more PolyCUB airdrop over the remaining 45 days but it seems that the POLYCUB/xPOLYCUB ratio is getting out of hand as its already past 15 and reaching 100 could e possible sooner. @taskmaster4450lehad made a case for a $100 xPOLYCUB.

Last night, I decided to start staking 25 POLYCUB swapped from 102 pLEO. That placed me at 2.2 xPOLYCUB and its a beautiful start. I believe in the power of stepwise growth and compounding drops. Looking at 5 LP POLYCUB farming stake and 100 xPOLYCUB Stake value over the next 15 days. Below are a few screenshots of the process. 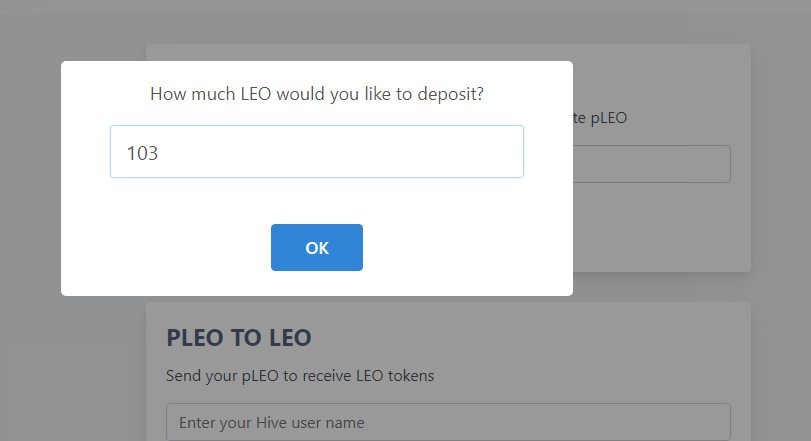 wrapping LEO on Hive to pLEO via https://wleo.io/polygon 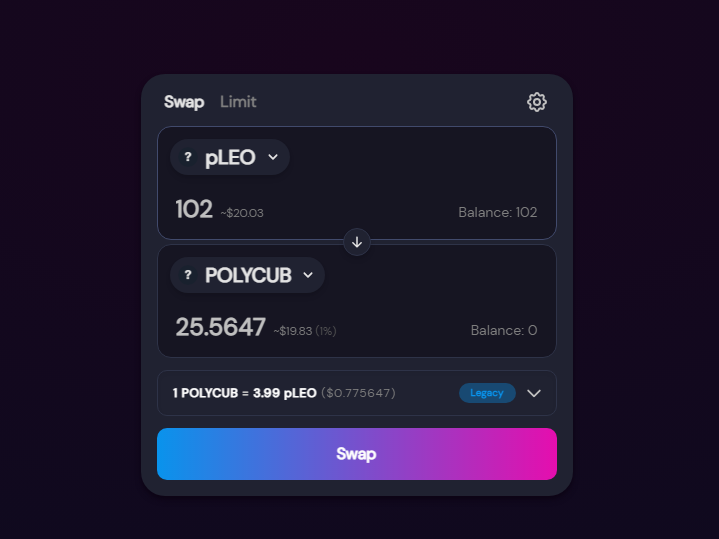 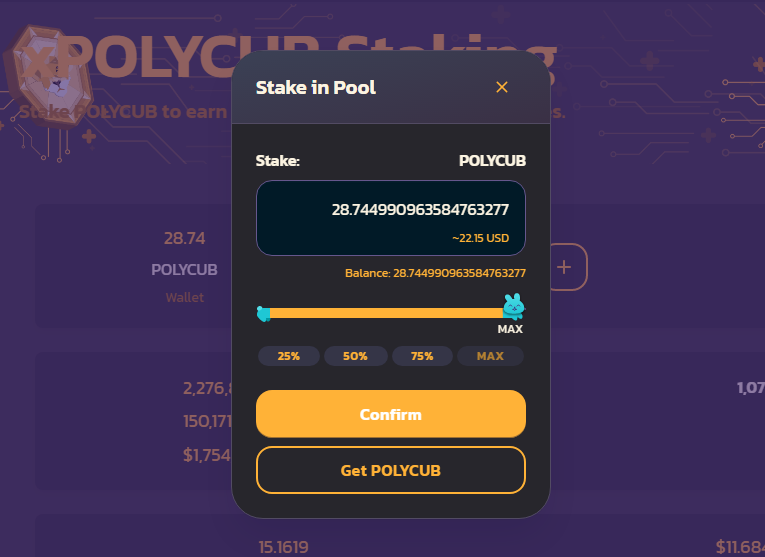 A beautiful journey just started. It reminds me of the days when we were stacking LEO and building our portfolio gradually till it became huge and tangible. The future of wealth is here.

Hive is an innovative and forward-looking decentralized blockchain and ecosystem, designed to scale with widespread adoption of the currency and platforms in mind. By combining the lightning-fast processing times and fee-less transactions, Hive is positioned to become one of the leading Web3 blockchains used by people around the world. source

Hive-Engine is a smart contract platform on top of the Hive blockchain. It allows communities and businesses to build their own tokens, which are then built on top of the technology provided by Hive. This is the ultimate layer 2 solution. The token created on Hive-Engine is then immediately tradable with Hive on their exchange.

I am a called teacher, a serial entrepreneur and a Graduate of Agricultural Engineering. Nigeria is my root and a place full of opportunities. I dropped out of a Master's Degree program due to funds, yet I do not regret growing the courage to start my business from the scratch. Today, I've built layers of Businesses on the Hive blockchain in terms of Curation and it's a sustainable passive way of earning crypto while learning.

I am your favourite Hive Tribes Promoter and Curapreneur!
I am @Uyobong.
Let's connect on Twitter

I'm just approaching 5 xpolycub. To me that means I missed the boat but it makes me hopeful for the next project. I just don't have money to throw around and I feel funny about spending my Leo. I don't know why I don't buy poly with it but it just feels weird to me.

Keep pushing. Every little step brings us closer to the goal.

This is a VERY Solid and well-written article full of information and I love that I was included in this one!

@@@onealfa.leo You get so many props for recognizing the value of the xPolyCub pool early on and inspired me to go all-in with your 10k post! Seeing you at 30 xPolyCub definitely means I wasn't thinking big enough, lol.

@Uyobong great job on getting your first 2 xPolyCub and making a commitment to building your position over time! This truly is an opportunity to 10x a persons wealth and as such, should inspire many people on LeoFinance to increase the level we all put into our careers so we can level up our investment capital!

Cheers to your success!

Thanks man for the reply.

This truly is an opportunity to 10x a persons wealth and as such, should inspire many people on LeoFinance to increase the level we all put into our careers so we can level up our investment capital!

Really the truth. Good, we can raise our capital for such investment right here from creating contents.

$0.00
Reply
[-]
poshtoken (80) 9 months ago
The rewards earned on this comment will go directly to the person sharing the post on Twitter as long as they are registered with @poshtoken. Sign up at https://hiveposh.com.
$0.00
Reply
[-]
anderssinho (63) 9 months ago

Hivebits blends Hive's blockchain and Bitcoin's ethos. Your effort = your reward. Mine HBIT simply 1-per-day with (no space): ! hivebits or ! HBIT or ! hbit or $ hbit.

Success! You mined .9 HBIT and the user you replied to received .1 HBIT on your behalf. You can receive 100% of the HBIT by replying to one of your own posts or comments. Or, support Hivebits at the official HBIT mine | your wallet | market | tools | connect | <><

This confirmation reply will go off when Resource Credits (RCs) get low. Yet, your hivebits command will still go through and you'll get your HBIT. :)