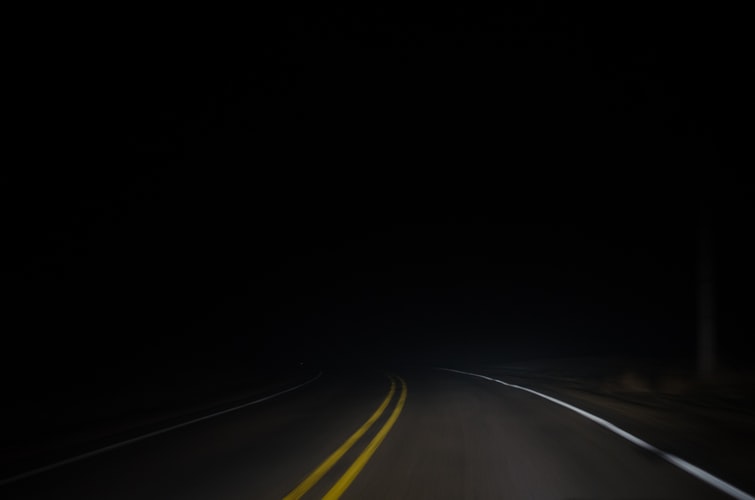 The highway was dark and lonely, only a slice of the moon could be seen in the empty skies. In this part of town, nothing it seemed, lived. Those nocturnal sounds were absent. There were no chirping crickets and croaking frogs. There were no hooting owls and flying bats. Just a deep and intimidating silence.

This was an area that once it was dark, it would be in one's best interest to stay away from it.

A dark sedan cruised into view, its engines were quiet and its headlamp cutting through the darkness like a knife through butter. Soon, the speed of the car began to reduce, and eventually, the car jerked once and came to a halt by the side of the road.

"No! No!!" Jason, the driver, cried angrily as he punched the steering wheel in frustration. "Come on!"

"No amount of punching or screaming will make an empty tank full," Stella muttered, she was seated beside him.

They had been married for three years and it had been the best years of their lives. And in each of those years, they took a road trip to a campground on the outskirts of the city. And it was fast becoming a tradition.

Usually, they traveled by day so they would get to the camp early enough. But today, everything seemed to have been jinxed. According to Stella.

Stella had woken up feeling sick and Jason had been summoned to his office over some discrepancies in his handling of the company's finances. He had been cleared, of course, but that had taken the entire workday. And then some.

Upon getting home, Jason had insisted they still take the trip.

"This is our thing, baby." He had said to Stella when she disagreed. "We won't let a little sickness and my clumsy boss cause us to change that."

And because she too wanted to go on the trip, she agreed.

And in their hurry, it never crossed their minds to check their fuel gauge.

Now, fuming with anger, Stella opened the window beside her. Letting in the fresh air.

"I knew we shouldn't have come on this trip today." She muttered.

"I'm sorry, baby. This is my fault." Jason apologized.

"Yes, I agree with you. You've been driving for the past two hours, the gauge is right in front of you! How the hell did you not notice we were low on fuel?"

He turned on the interior light of the car and pulled open the glove box. He took out a neatly folded map.

The area surrounding them was quiet, the only thing they could hear was the rustling of the paper as Jason unfolded and spread it out over his lap.

Stella leaned over for a clearer view.

"Where is the nearest fuel station?"

"It's in the next city. This highway is between two cities, linking them. We would never make it on foot to the station. It's too far."

"There's a motel closer to us than the petrol station. Here." He pointed at another point on the map. "We can spend the night there then continue our journey in the morning."

"So, eventually we are getting to our destination by tomorrow. I knew today was not for that trip."

They got out of the car, locking it. Armed with the map and taking each other by the hand, they began to walk, leaving the car behind.

It was a winding road, twisting left and right at odd angles.

"This is odd," Jason muttered as they took the fourth curve. He opened the map and with his flashlight studied it, "according to this map, this should be a straight road."

"Are you saying we're lost? Or you read it wrong?"

"It can't be. This is the correct map and I know what I'm doing. Moreover, this is not the first time we're making this trip, and doing so on this route."

"But it's the first time we're doing it at night."

They took the next turn and froze.

"Oh my God!" Stella gasped, "this is impossible!"

Directly in from of them was their parked car.

"I don't understand," Jason muttered, staring at the car dumbfounded.

"Did we double back by mistake?"

"No. We've been walking forward ever since. The car should be behind us, not before us."

"Come on baby, we need to keep moving. We will try again."

They walked away once more, leaving the car behind as before. And eventually, they found their way back to the car.

It was like a sick joke someone was playing on them. They were trapped in a loop of sorts, unable to leave.

Jason didn't even try to change her mind, he too could feel it. In the air, in his soul.

They were in trouble.

"Get into the car, baby. We'll stay here till morning."

Hopefully, this sick mystery would be over with the rising of the sun.

The End.
This story is written in response to this week's fiction prompt Winding Road. Feel free to check it out.
Thank you for reading.

What a wonderful story, @bruno-kema. I am truly creeped out by their situation. I was thinking "Psycho" when you mentioned the motel. But no, you didn't go to the expected. You created a whole new terrifying scenario. Usually, I'm sure, Stella wouldn't be so unpleasant, but she's not feeling well. Of course she's angry. You establish that character well.

This is a horror story with an existential dilemma. Where are they in time and space?

I'm building my VP now for the day, so I'll leave you a tip instead. I promise to come back with a vote later. Really good job.

(May I make two suggestions? I wouldn't make these suggestions if you weren't such a good writer. But I think you like things to be perfect :)

This is really two sentences:

He pointed at another point on the map, "we can spend the night there then continue our journey in the morning."

Also, in the paragraph below you transition POV from 'they' to 'we'. In dialogue you have used first-person 'we' throughout the story, but in narrative you have used third person 'they':

We got out of the car, locking it. Armed with the map and taking each other by the hand, we began to walk, leaving the car behind.)

A really, really good job with the prompt!

Every time I write a blog my husband proofreads it first. He always finds at least one mistake. We are only human ;)

This is a truly wonderful interpretation of the prompt. You build atmosphere and character well. The story arc is perfect.

Thank you for sharing this story with the Ink Well community.And, thank you for engaging regularly with other writers in the community. This engagement makes our community stronger.

Thank you very much for reading and your support.
And as always, i am glad i posted in this community.

A journey that becomes, in a metaphorical sense, uphill, winding. There are multiple inconveniences that are resolved little by little and whose sinuous condition becomes evident in the loop of the circular walk that the spouses undertake.
It's an intriguing story that leaves us in awe. Thank you for posting it, @bruno-kema.

I love this story, @bruno-kema. It is riveting. It would make a very good Twilight Zone episode! I had a terrible feeling the whole time I was reading, so it was a huge relief that the only bad thing was that they have to spend the night in the car. Well done. You have a gift with building suspense.

By the way, be sure to add your link to the prompt post. :-)

What an awesome story!!! I couldn't stop reading :) I wonder if they ever escaped the loop :) ...

@bruno-kema, I must say I couldn't stop reading this story until I got to the end.

The way you built the suspense I was expecting something unexpected and horrific to happen but was glad it didn't and the couple only had to settle for an unpleasant night cramped together in their car frustrated and helpless.

That gave me chills!
Maybe getting caught up at work was a sign not to go on that trip?
But then again, if only Jason had checked the gauge...
I can imagine Stella on his case all night... and I hope right into the morning

Excellent story, very well constructed. You have to pay attention to the signs. I hope nothing bad happened to the couple in that unfortunate event and they are alive.

Hello @bruno-kema. A nicely-done mystery. Maybe even a horror story. I love your characters you built at the start. Stella is skeptical; Jason is optimistic. You tempted us with the motel. Oh no, I thought. Don't go there! Happy to see you led your readers in another horrible direction.

I love that the characters always have a map, but still seems to lose their way. I must admit though, I'm not much of a map reader. I also like this story of being on the road at night. It's scary enough in the dark, but to add unexplained events just makes the story scarier. We don't know what will happen at the next turn.