Would the Image I Used for this Post be Considered "Fair Use"? 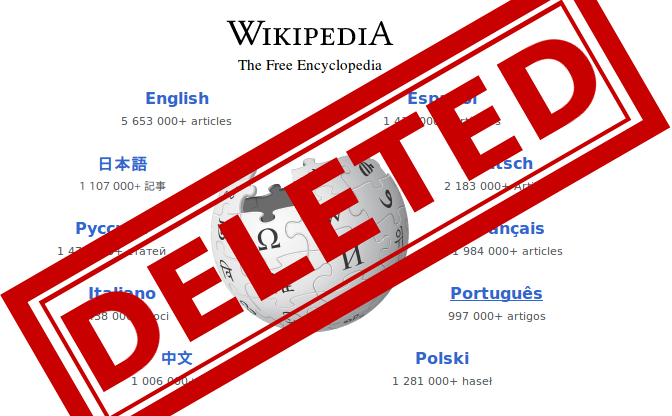 My last post asked a question about the use of screenshots on Hive.

I created the image above by taking a screen shot of the Wikipedia home page. I then imposed a huge red stamp that says "DELETED" on the image. The purpose of the image is to talk about the important issue of censorship on popular web sites.

This practice is problematic. Lets say there was a huge corporate scandal. The scandal is related to the old new. Deleting the old page allows the corporation to distance itself from its scandal.

Because Wikipedia goes through an open-editing process, it often has good information. They usually spell the names correctly and have the correct dates for events. I dislike that Wikipedia has grown to dominate the field of online research.

But lets get back to the image: I think that the image falls squarely in the realm of fair use. I could be wrong. Fortunately, Wikipedia publishes using the Creative Commons License .

Anyway, I created the Review the World community as a place to write web site reviews. I would like to make use of screenshots. I haven't published any reviews because I haven't figured out it screenshots are considered "fair use."

I wouldn't worry about it, it's not like you are gonna be noticed by a major corporation, and if you were, you could use it as a platform to say what you got to say.

As long as you cite the source, you should be good, imo.

The big companies like going after small groups and individuals. The small groups tend to lack representation. Even worse, the big groups are able to choose jurisdiction.

The application of DCMA in P2P files haring applications is a good example. They go after college students. According to NCCU the fines start at $750 per file. The average case is usually around $4,000 but can run higher. You can check court records and you will find college students saddled with fines they are completely unequipped to pay.

They go after college students!!!!!!

As for jurisdiction ... I live in Utah. Utah is controlled by a multi-billion dollar corporation that has an extensive history of stomping on people who challenge the central authority.

Can you guess the name of the corporation?

The corporation is powerful. They control the courts and most of the law firms. They came close to buying their way into the US presidency in 2012.

They have a long history of squashing people.

So, bend over and accept your enslavement?

If you need to win in court, here is how to do it yourself.

To effectively resist one needs to know what they are resisting. If I am resisting the multi-billion dollar corporation that sits on the corner of Temple and State; I do not want to hamper myself by accidentally running afoul copyright law.

BTW, the multi-billion dollar corporation on the corner of Temple and State appears to be crumbling from the inside.

Seems a little ocd, to me.

Firstly I'd like to say this is a great idea for a community. I had been thinking of something similar but doing it about Youtube channels, not just posting videos but reviews of the certain youtuber's body of work. It never occurred to me that there would be an issue of legality to use their image if needed. Would love to hear what others more knowledgeable have to say about this. For me I believe it is Ok because what you have added to the image is the message you are trying to get across. I believe this is transformative work.

When people upload videos to Youtube, they give Youtube the right to distribute the videos through third parties. The copyright issue is a primary selling point of Youtube.

BTW, if you want to, you can add reviews for Youtube and Vimeo channels.

I personally do not like Youtube's dominance. I think it is better to review some of the many independent podcasts. Podcasts hosting companies generally allow for the sharing of content. You have to read the ToS.

I think twice before downloading, then uploading an image into Hive.

Saying "copyrights to the owner" will not help from facing cases, any person will be persecuted especially if they hold more power.

I stumbled in this when I tried to use a movie poster for a movie review, but found out I can't download it and use it here on Hive platform, since it conflicts with Fair-Use Policy since—we are posting with earnings no matter how big or small the rewards are.

One workaround is to use the image permalink and insert it to the <img src="link" /> tag, this way your hosting the image directly from the parent site and not in your account's server.

Using the img tag to display an image you don't own is called "hotlinking." It is actually more taboo than copy and paste. That's because you are using both the Intellectual Property and IP from another user. I would love to be able to use images from my site. I could make a hit counter and see how many people actually read my site.

When I try the img tag in Hive.blog, the system makes a copy of the image.

You are correct that the Fair Use concept in copyright is extremely complex.

Interestingly, the courts seem okay with thumbnails made from book covers and the jacket covers of movies. The image used for a book from GoodReads.com.

The Fair Use clause is extremely complex. I notice that Wikimedia requires that people explain why they believe uploading an image is fair use and they often deny uploads.

BTW, there were court rulings from a few years back that allowed the use of thumbnails from web sites in search engine listings. I wasn't sure how much one could use.

Anyway, I suspect the reason that you were "persecuted" (come on a downvote is not persecution) for a poster image is because the people who make posters for a living are protective of their livelihood.

I suspect you would not have a problem using the cover image of a DVD for a movie review. The cover images on DVDs are used to promote films.

Thanks for the info, I now another thing today with your reply.

Hotlinking really is a common practice for people who knows a bit of creating HTML or web programming, it's fun until it isn't anymore. I personally only use this for GIFs under Creative Commons License, not in other media.

The internet is really a shady place, people profit (some just do it form fun) on something they do not own and even tagging it under Creative Commons License. This is common on online services like the GIF industry where user can "create" their own Memes/GIFs and sharing it publicly. The original video/images converted into Memes/GIFs may not be under CC license, but the site will label the output under it and anyone who wishes to use it will only need the shareable link.

Facebook and Google now uses complex algorithm/ML to pre-process your uploaded media and detect signatures of stolen media embedded into it. Your media will be either muted, blocked, removed from the site. On Instagram, fans, out of support to artists, report accounts (to certain "watchers" and perform mass reporting for removal) who steals art who sells at as mugs, t-shirts, posters etc.

Fair-Use is really different when you're a big-tech (search engines, entertainment websites, etc.), you can find the best lawyers and best web developers to find ways not to be persecuted by the law, even if the company is profiting from it in one way or another. Normal people get jailed/fined especially when you get viral while using stolen media.

I personally "almost" experience this (not a movie poster), when I created an automated bot to web-scrape a certain site and auto-generate quotes out of publicly shared media and shared it in Facebook for entertainment purpose, people who owns the site contacted me and my family, it was resolved--I think.

That was the sole reason that I'm more keen before using movie posters here Hive, but is OK with it on WordPress, not because I'm afraid of being jailed/fined, but because I already learned my lesson not to steal media, because I also do have art and published books, and I don't want anyone stealing it, may it be for profit or just fun.

I would just try to switch some of it up if you could.
love your page btw