Clash Of Streamers is the only game that has blockchain integration aside from Splinterlands which I personally play and am invested in. With the initial experience for new players that aren't used to gacha games being quite overwhelming and confusing, I made a small tutorial explaining the main gameplay loop...

Note: The game currently is in soft-launch meaning they are still optimizing things like the tutorial and overall balance while getting the NFTs properly listed on Opensea.io and such. The overall gameplay experience (on my 6-year old Iphone 7) is really polished and smooth. 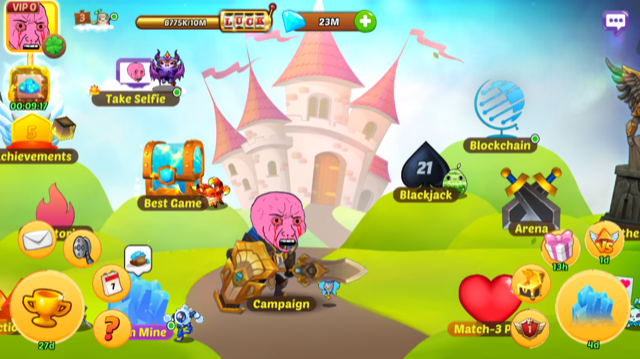 The Main Idea Behind The Clash Of Streamers Mobile Game

The game is designed for players to have some fun giving a dopamine rush in short play sessions during the day on your mobile phone. It taps into the enjoyment of collecting and leveling up heroes & pets growing your overall account strength allowing you to to get a higher ranking using a lot of gambling-centered mini-games. Players can add their own face/selfie/custom image and all heroes/pets can be exported as an NFT to the blockchain and sold on the market. All players get a generous amount of free in-game stuff they can use to progress each day and optional microtransactions/subscriptions are there for players who want to progress faster. There is a lot of automation built into the game and players don't require any mental effort to play and have fun. The process of collecting, leveling up and have your team fight automated battles is pretty much the main gameplay loop.

The tutorial is currently being fixed making it slower and better explaining the main gameplay loop (which this post is about). Right now, new players start on an empty land with different buildings that are being introduced one at a time. New players will be tapping around getting a lot of in-game rewards and dopamine not really knowing what it is all about. 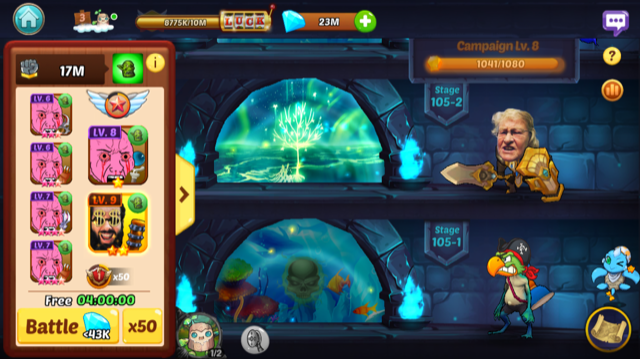 The Campaign Tower is the main area where you make progression as you let your team of heroes fight it out against NPC teams and bosses climbing the ranks if you win. When you aren't strong anymore to progress, you will have to make your heroes stronger. 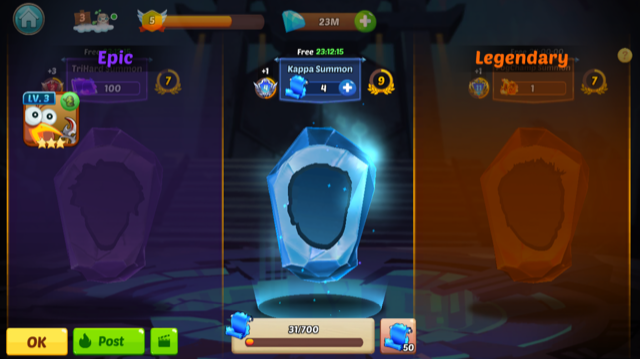 The main way in the game to get more heroes is to get Summon Scrolls which can be opened in the Summon Building (you can see those as card packs). There are 3 different types of scrolls, Trihard / Kappa / PogChamp. The skins/faces you get for your heroes depend on who you follow in the game/on twitch. 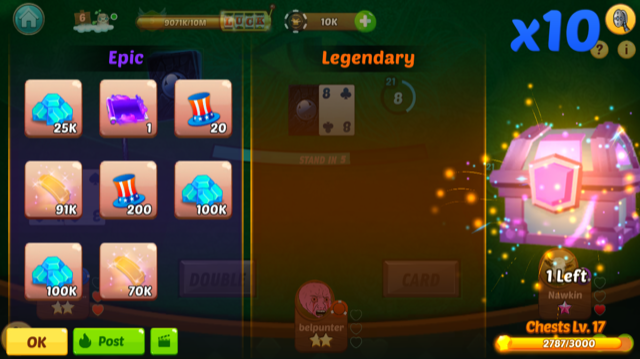 The way to earn more Summon Scrolls is to open a lot of loot chests that are everywhere in the game as they are being rewarded for making progress and for playing the mini-games. Opening these boxes also gives a chance on a multiplier getting more loot. The different in-game currencies are needed to play mini-games so you need to manage your resources and can only play/progress that much. 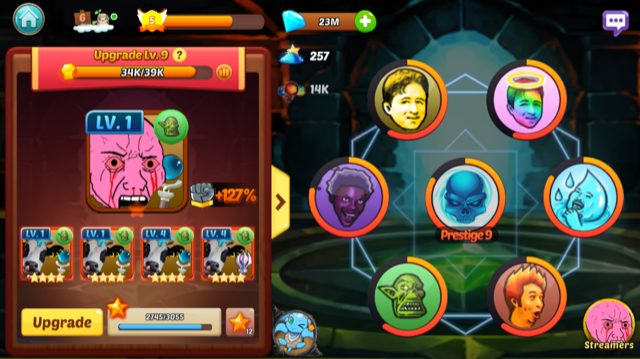 Heroes both have a number of Stars & a Level attached to them, the more starts and the higher level, the more powerful they are also having more abilities. in the Upgrade Building, you can merge 5 heroes giving 1 of them 1 extra Star which equals +127% extra attack power in the screenshot above. Merging heroes also earns you stardust which is needed to get them to a higher level. (see below) 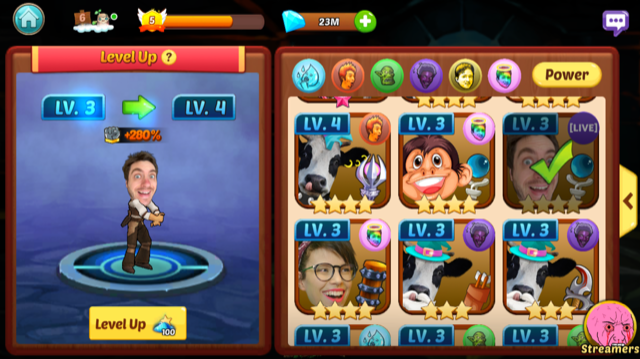 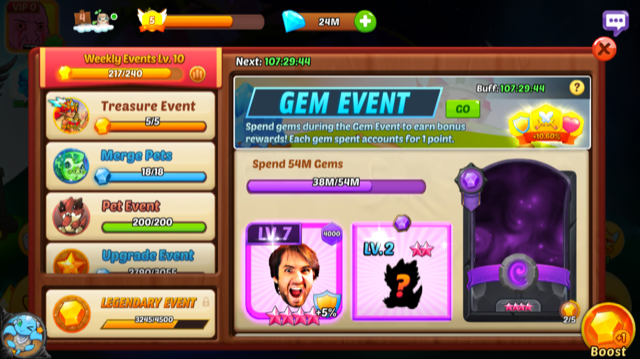 The easiest way to get higher Level Heroes is to complete events which require a certain amount of progress like Collecting Pets / Spending x amount of Gems / ... during the timespan of a week. Some of the progress of these weekly events like the Legendary event keeps your progress of previous weeks while others like the Pet Event always just resets. 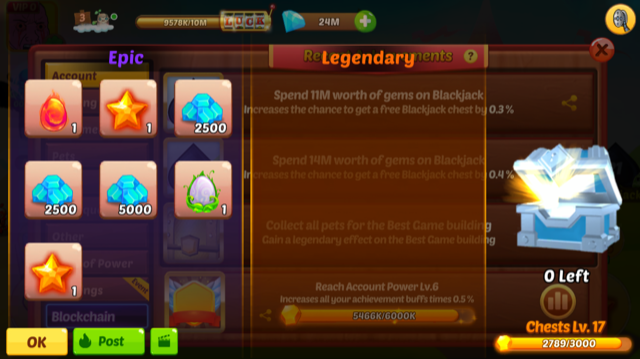 Completing Events in the game along with any kind of general progress reaching specific achievements earns legendary stars. These Legendary Stars also come from chests that are opened in the Achievements building (1 is included in each chest). 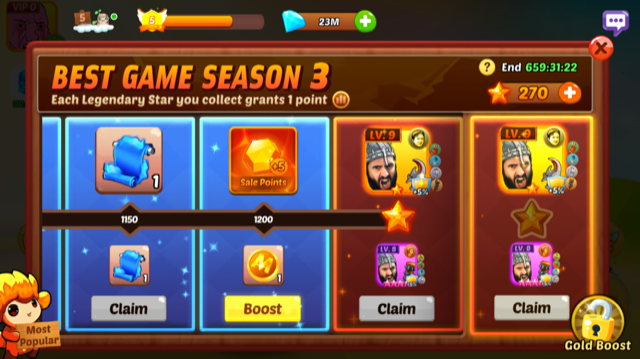 There is a road to collecting 1200 Legendary stars during the course of a season unlocking bigger rewards along the way with a Level 8 Hero when completing it. There are extra season rewards that come with a 5.49€ microtransaction(players get them even if they don't complete the quest) which is by far the best deal in the game as it comes with 1 free purchase of any deal in the game. (Players will be pretty much left with making a choice to take a one-time free '110€ value' purchase or a free 5.49€ purchase to forever renew the season deal.). 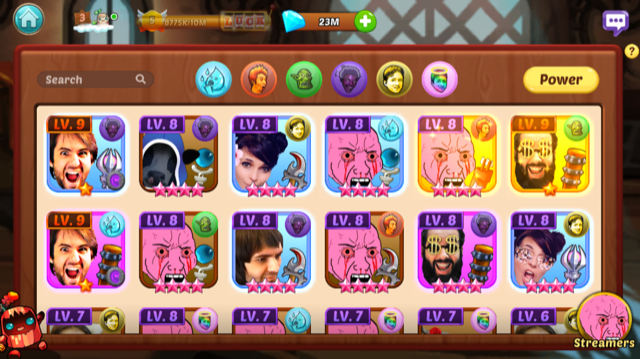 Reaching the end-game of having Max Level heroes (Level 12) will take quite a while but it can be done by quickly playing for 5 minutes on a daily basis. Heroes can be exported to the blockchain as an NFT in limited amounts (The in-game currency crypton is needed for this as it covers the gas costs. You can earn crypton by playing and it also can be bought with microtransactions). With the potential for the game giving real reward drops in the future & higher-level heroes who are quite hard to come by, they might sell on the market for some serious money (looking at what Axies go for or some cards in Splinterlands) if the game manages to get popular. 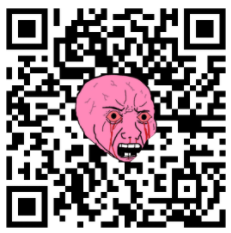 Pretty much everything in the game has progression bars that give players rewards reaching the next goal allowing them to make their team of heroes stronger . Everything is tied together really well providing an overall fun experience. The game really has me addicted and abilities to export heroes as NFTs which potentually can be sold in the future give me the perfect excuse to keep playing a bit daily. This for me is the main difference compared to all other crypto games which would instantly lose 95%+ of their player base the moment the rewards dry up. (Read the Ponzi Collapses). I'm quite confident Clash Of Streamers has everything to do well as a mobile game and they already got contacted by google who noticed them in the top grossing new games and xiaomi who want to have it pre-installed on their phones. Anyone who wants to test it out, it is still very early on giving maximum opportunity and it's free2play available on the IOS App Store & Google Play Store (or scan QR Code)

I plan on making a post with Tips & Tricks for beginning players next...

Thanks for the tutorial and explanations. I'll try to understand them through the play.

The least understood part is the 4. Merge/Upgrade Heroes. Nothing happens there. All fields in the right circle are grey...

It probably shows 'get more' as you need at least 5 heroes from the same class in order to merge destroying 4 and making 1 stronger.

I'll be grinding my way up to at least some max-level heroes / pets even if it takes me a year of daily 5-minute logins, It is a real challenge to get them so they should be quite valuable if the games catches on while there also is a rental system in place. I'm still learning a lot myself and will make another post with some good tips & tricks somewhere in the coming weeks. Next up is opening the next level of the @upvoteshares program which is well overdue as I have been postponing it with of Euro 2020 taking up a lot of time.

Thanks and OK. Yes, @upvoteshares! Time to save and prepare some $HIVE :)