Life is Precious #12 - The Call that Saved a Family

evernoticethat (68)in The City of Neoxian • 4 months ago 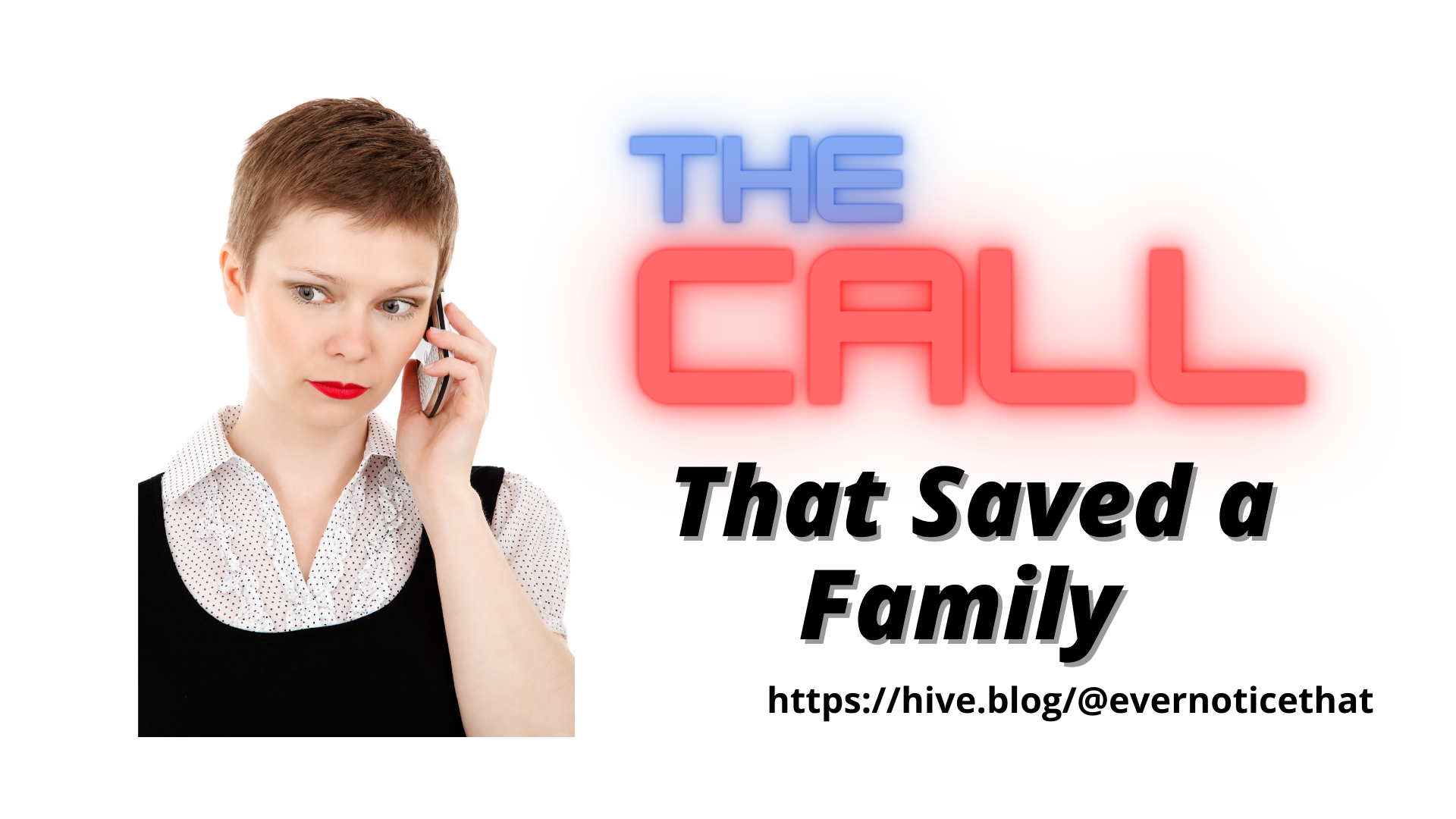 I get a true sense of joy in helping others. Many people here say I was "born with a good heart" as if that is something that has gone out of style, but it's just a natural part of who I am. If you've been following my blog over the last five years (both here and back in the old Steemit days), you may recall me mentioning a job I had working as an operator for the phone company Verizon. This post is about a call that came in which ended up bringing a family together.

I was working a split shift and relaxing in our break room before my next one. Something you should know about our profession is that while it's an easy job to learn, it's a hard job to master. Upon hiring, we were told we had 1 year to get our average call time down to the target number. As a new operator it seemed daunting that we'd make it, but my team coach told me to watcBlog - Stake - Delegateh my stats over the next 6-12 months and the numbers would naturally improve.

What happens is that over time, you tend to discover workarounds which help you find numbers easier and faster. Now these little gems are guarded like Fort Knox by the reps who find them, sharing them only with their closest friends. Other more mainstream tips are only shared with new operators at the three-year and five-year mark in order to encourage them to hang around for the long term.

You Wouldn't Believe Some of the Calls...

I hear a lot of weird stuff over the phones, including one woman who caught her husband abusing her daughter. I could hear him begging her not to turn him in, as I read the number out to her and frantically called a supervisor over. As I was giving her the information, she hung up, but not before I noted her unlisted number (yes, we have that info), and passed it on to management.

They did nothing, as the company had been sued before for reporting another such case. I even called the local police from her area on my own and put them in touch with my boss who had her information, but they told me she didn't want to press charges, and that was that. We have witnessed assaults, threats, and you'd be surprised to know the sheer number of bent 10-12 year-old boys who call in and make the most vulgar calls to our female reps. It's strange out there folks!

Much information is hidden away in places you'd never expect, and that brings us to the subject of today's post. So I start the second half of my shift and a woman calls in in a panic. Her 15-year old son is missing. I confirmed that she'd reported this to the police, but she suspected he was a runaway. After calling the police to confirm her information, I did all of the procedural things we'd been trained on, then got down to work on my specialty in finding people, putting the years of workarounds I'd learned to good use.

With a Missing Child, those Little Things can Mean a Lot

When someone is missing, even seemingly inert facts can help in a search. That little factoid that you think isn't important, may be just what is needed to crack the case. So I began asking her questions about her son. Schools private or public? Hobbies, clubs and other outside interests? They had a long Greek last name, and she thought he may have gone to an area in Florida where he knew someone online.

"Was he religious?" I asked the concerned mom, turned out he was, and regularly attended their local Greek Orthodox Church. She thought it was odd that I was asking, but I knew from experience that churches and barbershops are key places where people go, and local things are known about. So scouring that city, I gave her the numbers to contacts at the Greek Orthodox churches and offices in the area. If he regularly attended at home, it would be hard to break that habit as a runaway.

A Mother's Love is the Most Powerful Thing in the World

About a week later, I got a call on my line. I'd given the lady my operator ID number, and she'd been calling all day hoping to reach me. My information had been the key to finding her son right there in church as I suspected. She shed tears of joy with me over the phone, as it turns out her son had been "catfished" by a predator posing as a girl he'd been messaging with for over a year. The family got their son back, and the boy learned an important lesson about not trusting everything you hear online.

She asked to speak to my boss and made left a glowing account of the work that I did in helping her to find her child. It was one of the proudest moments in my entire career, as God only knows what might have happened had he not been found in time. I took over a thousand calls each day, and over 2 million calls in the time I was there. Always be nice to the operator. They can be of assistance to you when you need it the most.

If you liked this article, please upvote and reblog, thanks!

Woah... You took over a thousand calls daily? Were you never tired?

Helping the woman find her child was really brave of you. Putting smiles on people's faces should be some kind of a priority too.

Yes, the minimum necessary was 800 calls, but we worked up to that number slowly during our first year. The job was tiring even though we were sitting all day, we felt as if we'd been doing physical labor at the end of our shifts. But the ability to help people such as this kind woman made it all worth it. :)

I see! I can't imagine myself sitting at a spot for up to ten hours, jeez! That's way stressful than doing physical labor. I'm glad you at least had something that kept you even more interested in the job. Weldone 🥰