Disassembly of a dry cell, and explanation of how it works

emiliomoron (70)in StemSocial • 11 months ago
Greetings friends. As you know, in our homes we have a great amount of devices that work with batteries, only with the children's toys and the remote controls of the audio and video equipment we have a high consumption of batteries, so we have clear that they are very necessary in our daily life, but, do you know what is inside and how it works? If you are as curious as I am, I am sure you have already disassembled one to look at its components, but if you have not or want to learn more about this type of battery, stay and read to show you what is inside and what makes it work. 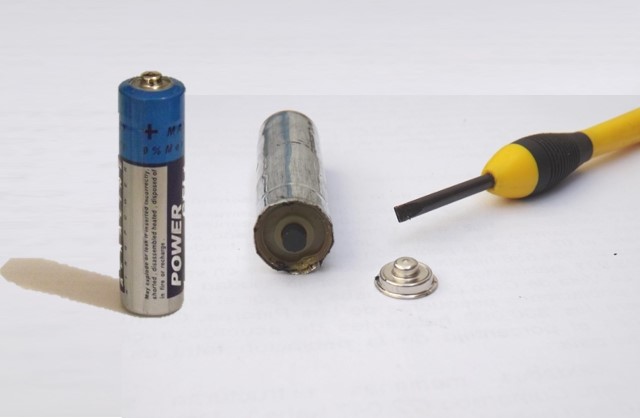 A dry cell, also called a salt cell, is the common zinc-carbon cell that we know; it is a device that functions as an electrochemical cell in which the electrolytic medium is a dry paste instead of a solution. The electrical energy is obtained from a chemical reaction that takes place between two compounds, zinc and manganese dioxide. This device is made up of an external zinc container, which acts as both a container and an anode (or negative terminal), inside it there is the cathode (or positive terminal) made up of a paste of manganese dioxide (MnO2) and carbon, and the electrolyte, a mixture of ammonium chloride and zinc chloride[1], although it is not completely dry, but the humidity is barely sufficient to allow the current to flow. The electrolyte is separated from the manganese dioxide mixture by a paper separator, and the carbon in the mixture helps to compact it and improve conductivity.

Inside is also a graphite bar, which besides being an electro-collector of the current, provides support to the battery; and thanks to its porosity, the hydrogen product of the chemical reactions involved can escape from the device. The cylindrical zinc coating has a metal plate at its base that serves as a negative contact, and in the same way, another plate is placed over the graphite electrode to serve as a positive contact. The plastic wrap is not only used to stamp the manufacturer's mark but also provides protection to the zinc container. In the following picture we can see a representation of the mentioned parts. 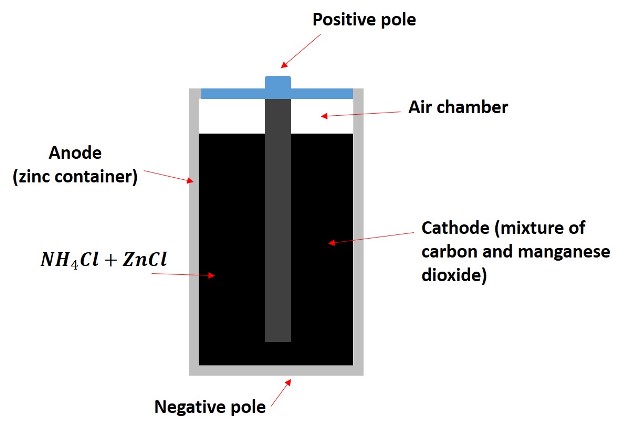 Representation of the parts of a zinc-carbon battery. Author: @emiliomoron.

Let's see what happens when you put a zinc-carbon battery into operation.

As we mentioned before, the zinc container functions as a container and as the anode of the battery, in this one a zinc oxidation reaction takes place:

In the reaction, the zinc loses two electrons and is oxidized to its oxidation state +2, while the released electrons travel through the circuit until they reach the graphite rod, where the manganese oxide reduction reaction takes place:

In this reaction, manganese is reduced from its +4 to +3 oxidation state.

On the other hand, from the electrolyte, ammonium chloride gives rise to chloride ions by reacting with hydronium ions.

When the above reactions are combined it is obtained:

But in addition, in the graphite electrode also occurs the reduction of ammonium chloride: 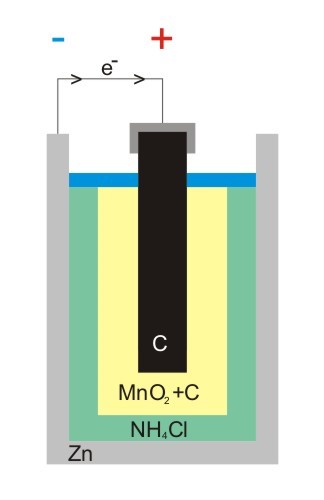 Diagram of the polarization of a battery. Source: Wikipedia.com, public domain image.

Once we know how the battery works, we can go on to disassemble it, knowing what precautions we must take in doing so. Although there is no excessively dangerous compound, we should at least use gloves and safety glasses.

As we know there are batteries of different sizes, I have taken a triple A. First remove the plastic that protects the zinc container, this wrap helps prevent the battery from deteriorating and holds the metal plate that functions as the negative terminal. 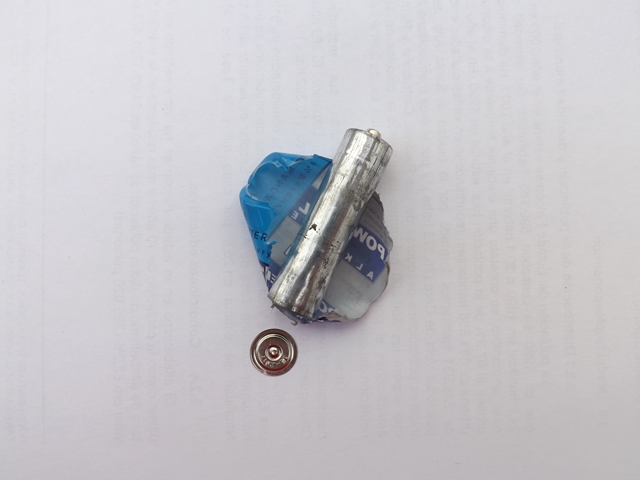 Removing the plastic cover of the battery. Source: @emiliomoron.

Then, with the help of a screwdriver, remove the metal plate that serves as the positive contact. As can be seen in the image, when this plate is removed, the graphite electrode is already partially uncovered. There is also a plastic ring that serves to seal the container. 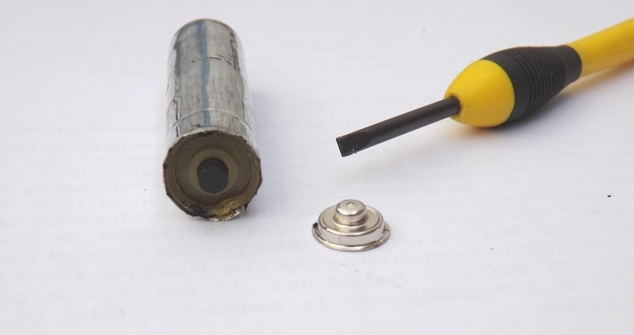 View of the battery when removing the positive contact. Source: @emiliomoron.

When removing this plastic ring, continue with the cut of the zinc container with the help of a tweezer, I was doing it vertically to discover all the components of the battery. In the following image we can see them. 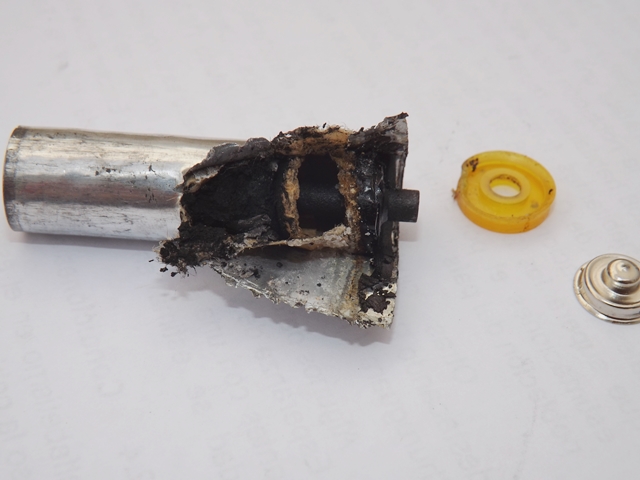 View of the separation between the mixture with maganese dioxide and the positive contact of the battery. Source: @emiliomoron.

You can see that after the plastic ring follows a black resin cover and then a pair of cardboard washers separated by a space, the last of these seals and separates the contents of the zinc container and the electrode tip. When the washer is removed, a black paste can already be seen; this is the mixture of manganese oxide, electrolyte and carbon. When beginning to cut the zinc container the porous paper is observed and after this one, this paste (or dust, will depend on the amount of water that has absorbed), once opened all the container is very easy to extract the graphite electrode and the black colored mixture.

In the following image we can appreciate all the mentioned parts. 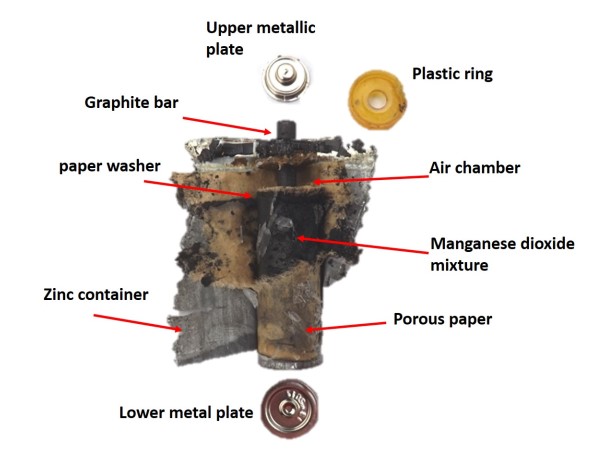 Identification of the components of a zinc-carbon battery Source: @emiliomoron.

Usable parts of the battery

A spent dry cell may provide us with some useful materials to conduct some home experiments or school demonstrations. For example, the graphite rod can be used as an electrode in electrolytic cells, since it is a good conductor and is inert, which makes it ideal for conducting electrolysis experiments. For this purpose, it is convenient to scrape its surface a little, wash it very well and let it dry, so that it is ready to be joined to a conductive cable and reused as an electrode.

Zinc is an element that reacts very well with acids, and has good redox properties, I already used it before to make an electrodeposition of zinc on copper, so it will be useful for other oxide-reduction experiments. Therefore I cleaned it very well and kept it as it is.

With the post I hope I brought you information that will be of interest to you regarding the composition and operation of a zinc-carbon battery. By relating the parts with the functioning of the same one it provides a guide for the didactic approach of topics as reactions of oxide-reduction, that substances behave like electrolytes, and functioning of an electrochemical cell. Thus, the use of everyday elements for practical experiences at home is emphasized, as a way to bring chemistry closer to the students, thus stimulating their observation and analysis of chemical processes that occur around them.

Well friends, thank you very much for reading the post, I hope the information has been useful and will help you to know how a common dry cell works. See you next time!