🔥 Call to action! WINKLEVOSS twins are voicing the end of Facebook era on five or ten years! 200 Hive Giveaway 🔥

The WINKLEVOSS twins are predicting the end of Facebook in five or ten years;

“The idea of a centralized social network
is just not going to exist five or ten years in the future,”
Tyler predicts, when asked about Facebook.
“There’s a chasm between the old world
and this new crypto-native universe.”

Here is the article made by Forbes:

Revenge Of The Winklevii Link This is the task:

Go to the Tweet below made by Forbes, and make a comment, like it, and quote retweet it. Let us promote that Hive can help solve the problem against the Big Tech. Share the benefits of Hive or why Web 3.0 will make centralized social media go obsolete.

In the comments of this post, share the proof that you completed the task, and you'll be eligible for an entry or an upvote from @theycallmedan.

Best tweets will get

Hive prizes are sponsored by @threespeak

Thank you everyone for being a wonderful part of this community. Hive loves you <3 We want to recognize our great people on Twitter we always see every day. I am grateful to God to have you guys in our Hive Family. We love all of you, I am praying to God that He take good care for all of you and your family. <3
(Note: The list is the only name I know based on my limited capacity that I figured out on their usernames on Hive connected to Twitter accounts. If you think must be included on our list, we will appreciate commenting down and we will be happy to add you. Cheers!)

Let's do this! One more time in the vanguard, thank you so much for this awesome work that you're doing to promote our blockchain brother @hiro-hive, here's a couple of tweets that I made with an image made by me to send the message!

Thank you for the participation

Here's the one for the other article about the twins. Resource Credits are back to reply 💜

Namaskar to #Hive and Beyond 💜🤍

Great to have you

Task accomplished and it is not a lie Hive is changing the world and we have not realized yet and it is also thanks to these Dapp that is acquiring great power web 3.0 is opening the eyes of many people and the most beautiful thing is that thanks to decentralization can avoid censorship but in turn can generate awareness is something very beautiful what we have the opportunity to live.

I am thrilled to be able to contribute a little to Hive because it has given me so many good experiences that it is the least I can do 😁👍 and I congratulate you for the great effort you are making 😁👍.

Here is my answer:

Task completed, thanks @hiro-hive and @theycallmedan for the love of hive.

here is the proofs of task completion for my comment:

I also retweeted with quote : Here is my own proof

This is such a cool initiative @hiro-hive. My tweet is done! Please check here: 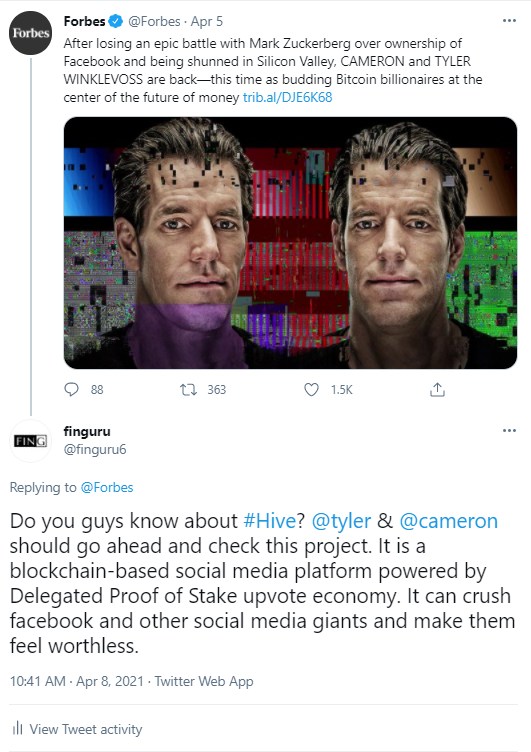 Happy to talk about our Hive on Twiter and here is POW. thanks

the task is done and here is proof of work. thanks

I'd do this all day long without been rewarded

These are just my thoughts. I have no interest in right or wrong. 🤓

First off, I dislike these: "Follow, Comment, Retweet" Twitter-based Casino games whereby the H̶o̶u̶s̶e̶ Author always wins. Remember, folks; they're designed to gain more followers and exposure for the thing you're being asked to share; you don't see users every day saying, "Share my post, and I might give you......". Having said that, I do the lottery, so I suppose it's no skin off my nose to do the three enchanted tasks of enrichment in an attempt to win 100 Hive. 😀

Second. I can't see it myself. I've seen people saying Microsoft would be finished for over 20 years now, that famous saying of: "Year of the Linux desktop!" and yet Microsoft is bigger than ever! The thing we have to remember is, Facebook has a brilliant usage model. There's no pressure to gain tokens, crypto or upvotes (God forbid downvotes). There's no need to worry about plagiarism or making sure your stuff is formatted correctly, that it has an image because nobody bothers with a post that doesn't have an eyecatching snippet image. Oh, and spending at least two hours a day commenting on peoples posts, even if it is a piece of turgid bilge water that was obviously churned out just to keep the production line rolling. 🤣

Look at the UI (User Interface) of Facebook against Hive. Facebook is designed to encourage conversation, whereas Hive is designed to encourage comments. As an example, how many posts has anyone seen on Hive that is: "Off out to Pink Rhino tonight, going to wear my lucky underpants"? None! Why? Because as I say, Facebook is for chatting with your mate's while Hive is for "Producing good quality content", which good quality followers can make intelligent and articulated comments on. They're two different business models that just happen to look the same on the surface. 🙂

Thanks for the insight, I guess Facebook has better UI than Hive until Facebook totally created chaos and division on each countries. The main point here is freedom which is far more important than anything else, in my humble opinion, I suggest to watch the Netflix movie called Social Dilemma, in case you haven't seen it yet.

On tweeting, I treat that sharing Hive on other people on Twitter is helping. Your freedom of speech is the most important thing for you IMO. Great to see your comment

I've seen it. Some of the participants twisted the information they presented as evidence tbh, and you'd need to work in the IT industry (Like I do) to pick up on it. Hence, my advice is, "Don't take everything you see or hear as gospel even if it does fit in with your views and values."

I can assure you there's no secret group of techies manipulating your internet experience to send you in the direction they want. Although having said that, "Profiling" has been around forever. It makes sense to show you adverts that, based on your web activity, is not only likely you'll look at but probably will increase your likelihood to buy.

Yep, Facebook is a perfect platform for manipulating minds. Still, I find it hysterical that people think Mark Zuckerberg is sat in his office stroking a white cat and screaming: "Make them all nationalists!" Mark cares about money, so it's about being able to go to the money men and saying, "I've 20 Million people here who all like liking telegraph poles. How much will you give me for access to them?" There's one thing people forget about not only Facebook but the Internet in general. The vast majority of the population on the planet couldn't give a shit about privacy or freedom or even security for that matter so long as they can see that farting monkey on TikTok, buy that torch from Amazon without faffing about with two-part authentication they're happy pretending on Facebook they earn 10 x more than they actually do and have far more expensive holidays than Sheril from year 4 at their former school does.

Nobody really believes in Freedom; what they actually believe in is their form of Freedom, whereby there are boundaries you must not cross over, and that's not Freedom, is it? 😉

I should watch the movie, thanks for the inspiration

Damn Addiction!!! Damn #Facebook!!! People all over the world are independent in their thinking and In the way of their lifestyle. Freedom of speech can make sure the perfect independence for them. #Facebook who gives you the permission to play with our personal #Data, who gives you the permission to do business with our #Privacy. You did it and still, you are doing it, So that, you are going to be finished.

This is high time to create mass consiousness among the people who still using #Facebook blindly. This is our responsibility, creating awareness among those people who really care about us.

Your data is being sold to a third party without your consent and permission. The movie Social Dilemma is the best movie to watch I guess

Sad to hear that you are blocked. We are doing this Twitter promotion until wheels falled-off into the ground and no longer has access on our accounts.

Thank you for your words. Hope those wheels break fast. I heartily join your call.

I have respect for these twins

I can see this happening along with many of the other major social media platforms. A major shift needs to happen though and quickly we saw that somewhat last year but it wasn't enough.

thanks for the shoutout, as always!

been dying for years ... we just need a decentralized social media that is actually good and works