As some of you may know I was recently nominated in the Binance influencer awards, the first 15 nominees were announced on July 4th, of the 15 announced, 14 were men. I was vocal about feeling a disparity in gender representation and need for inclusivity... The first question that was brought up was my merit to have been nominated in the first place.

I addressed this by showing my accomplishments over the course of the last year, and pointing to the fact that I've been called undeserving and unworthy of each one. 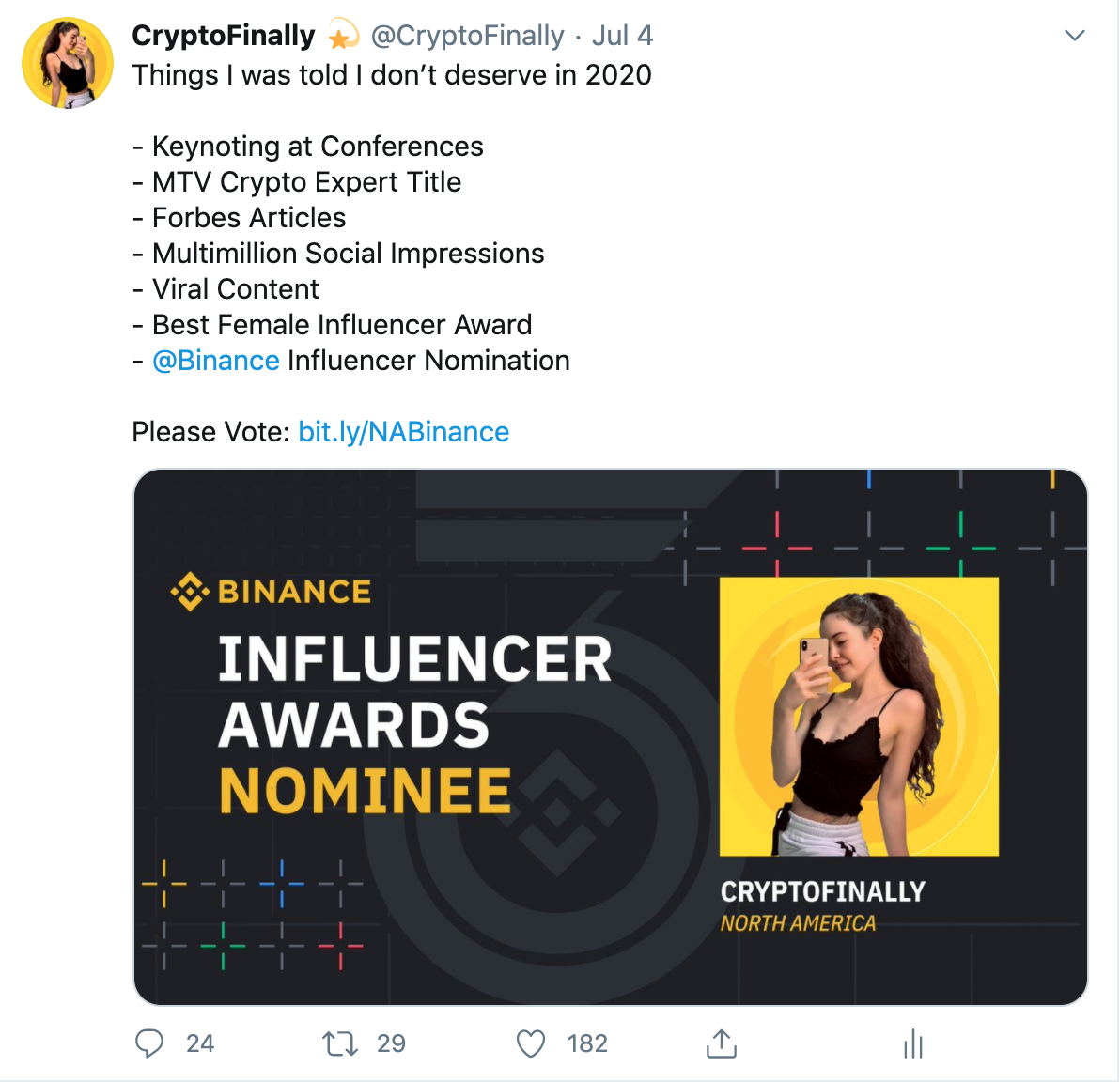 I don't know if you guys were on Twitter when I was featured on MTV as a "crypto expert" but it was a dicey one.

Here's an article on the response to MTV
Crypto to Get Massive Mainstream Exposure, Industry Surprisingly Salty
https://www.newsbtc.com/2020/02/20/crypto-to-get-massive-mainstream-exposure-industry-surprisingly-salty/

On July 5th the final 10 nominees were rolled out. Of the 25 nominees I was the only woman. Upon finding this out, I began to vocalize the need for inclusion & representation of women in the crypto industry. That is where the tale begins.... 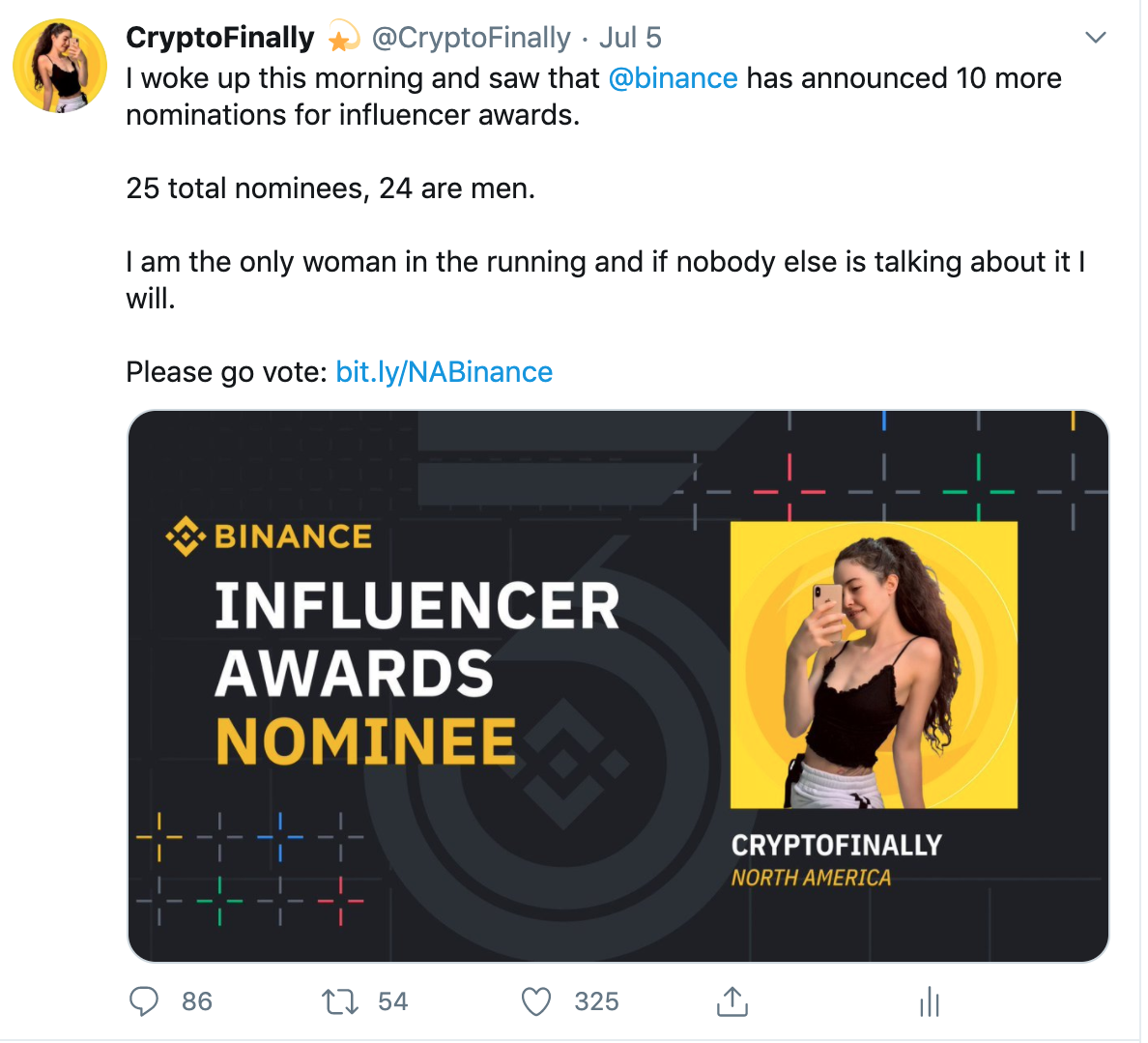 My call for inclusion in bringing up the clear gender disparity received a heavy amount of push back. To clear this conversation up, my follow through point has always been, if we are looking at influencers on a global scale, and selecting 25 - how is it that I was the only woman of merit enough to be mentioned on the ballot? I believe this points to a larger issue in our community, and a need for representation.

If you know me, you know I am vocal about social issues and advocating for what's right, unpopular or not.

I woke up the next morning to find that my instagram account, as well as that of @coruscate had been removed entirely from the platform. Flagged for impersonating ourselves.

I quickly took to Twitter to yell about the injustice. Yes. Yes, I did.

Catch my livestream about the issue here:

This was quickly picked up both by the Binance Team (CZ himself) and Cointelegraph. 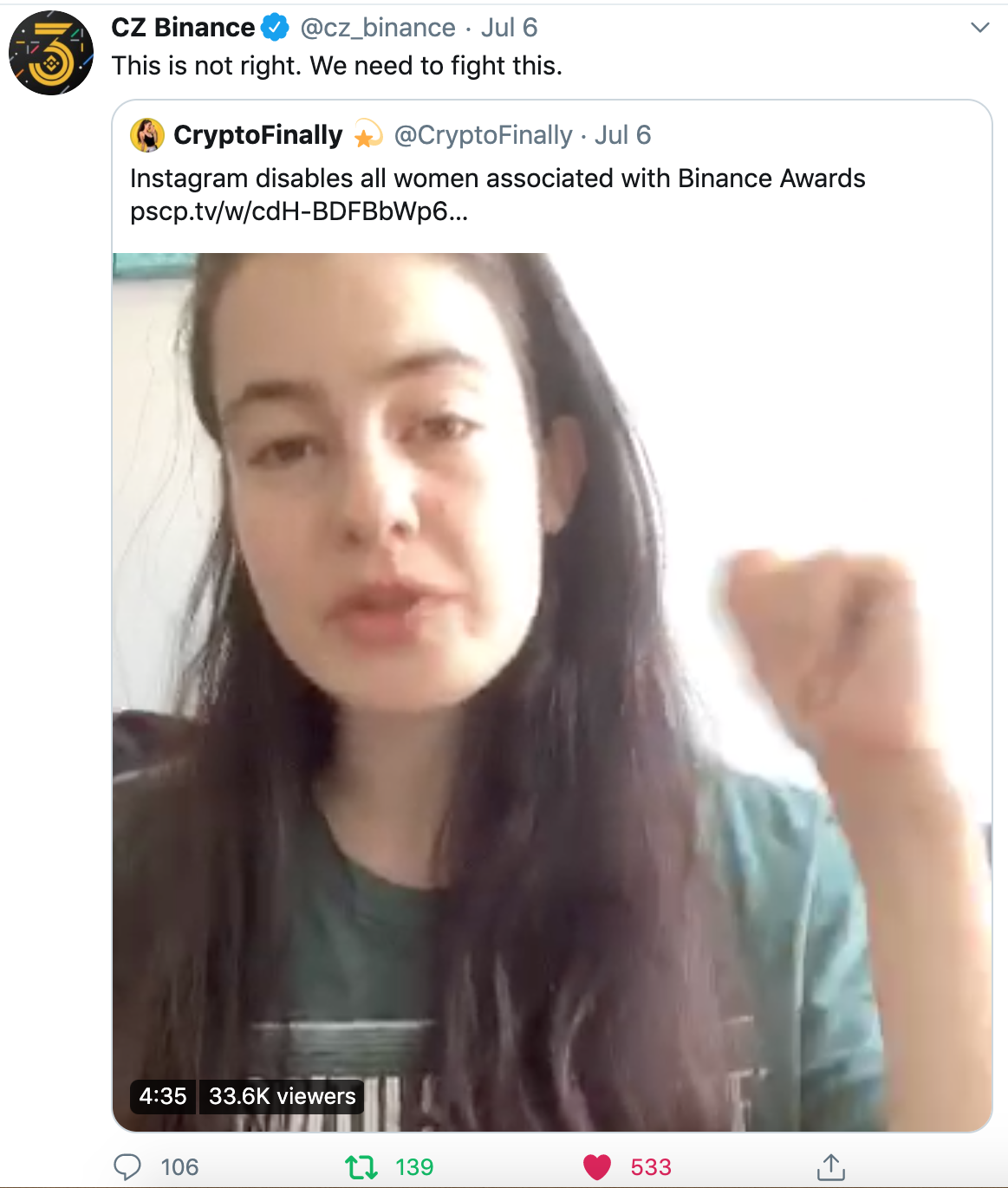 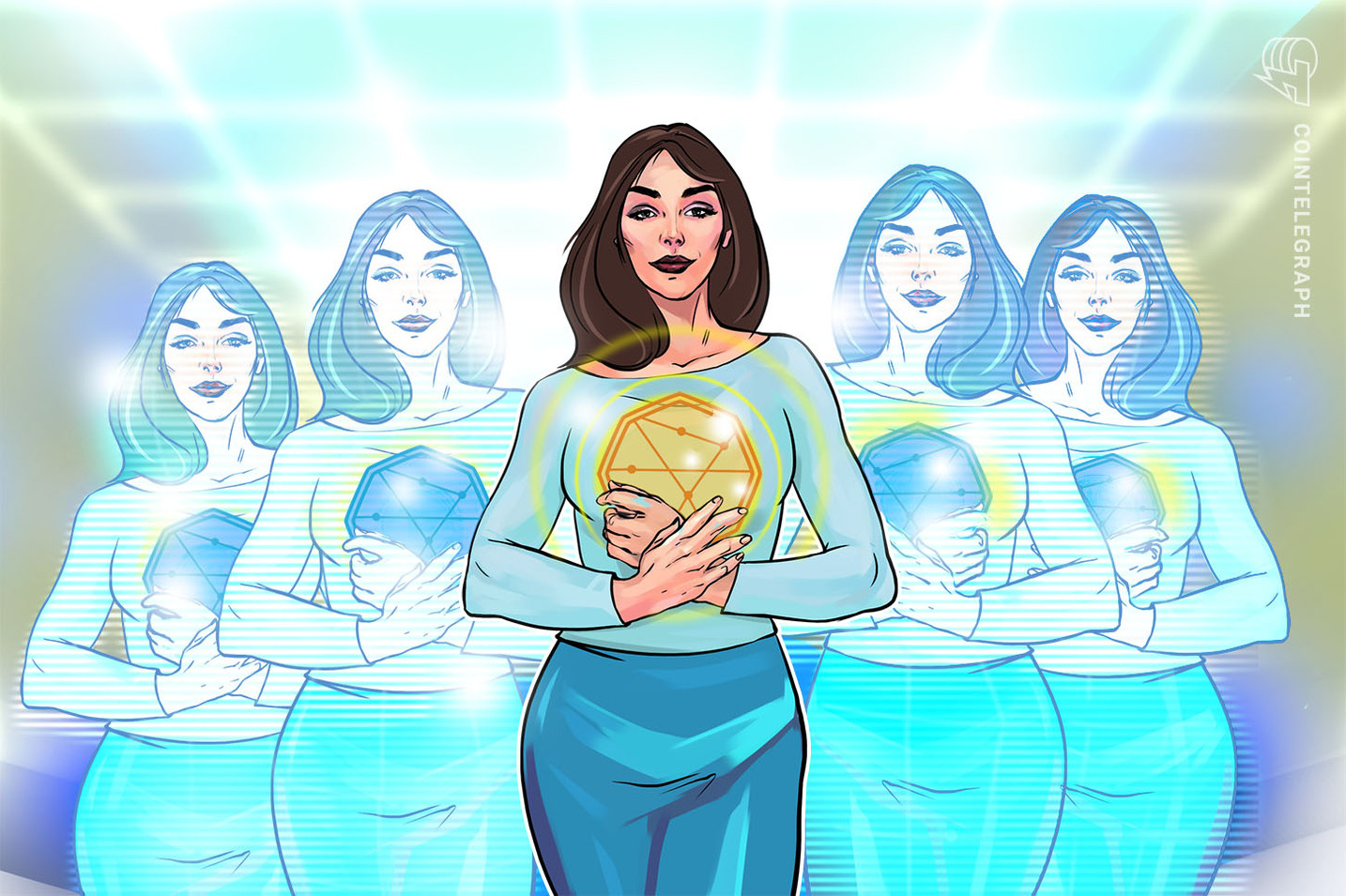 Change happens when we make the hard decisions and fight for what is right.

I could not be more humbled by Binance & Cointelegraph using their platforms to advocate for inclusion and unity in the blockchain space.

Positive change is on its way, we must fight for it.

Here is a follow up article by Cointelegraph bringing the full story together, and going into further detail about the experience I have had online in the blockchain space. 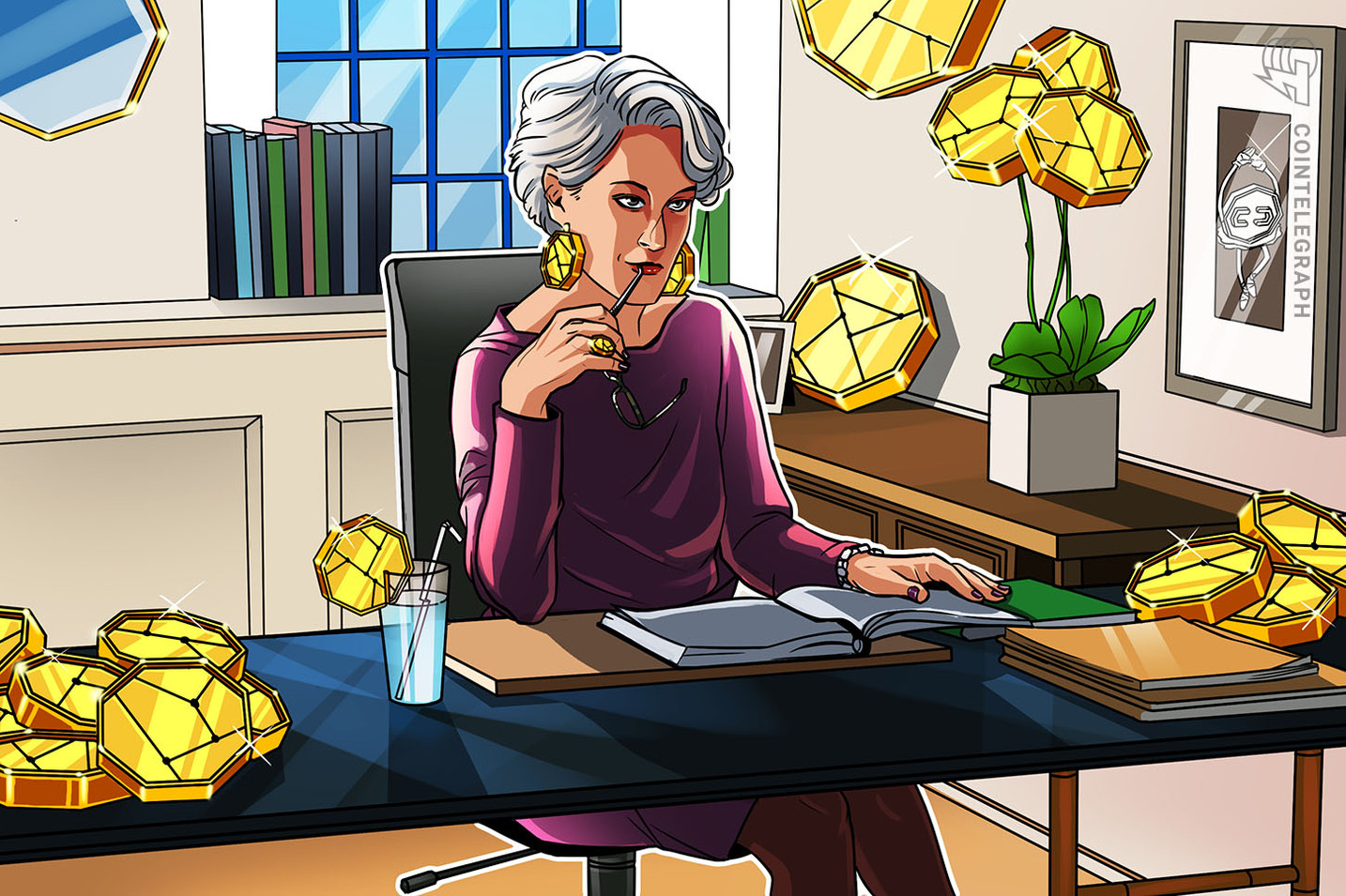 If you'd like to hear more about my thoughts on inclusion concerning this issue, please check my livestream from earlier today:

Thank you for being supportive of me in the space, together we can.

👍Get Bitcoin Back:
Get 30k Free Satoshis and up to 20% Bitcoin Back on Fold App:
http://use.foldapp.com/r/wqbaCNXK

Free $10 in Bitcoin & Bitcoin Back on Lolli: ​https://lolli.com/ref/xLdoJ9Z8RU

Get $2.50 Free Bitcoin & Bitcoin Back with Pei: ​https://getpei.com/​ (Use code CRYPTOFINALLY)

I addressed this by showing my accomplishments over the course of the last year, and pointing to the fact that I've been called undeserving and unworthy of each one.

You aren't what the tech people think off when they look at all the code and data. For all their intelligence, a lot of them don't realize that more people will respond to normalized language and explanations that they can understand. That's why your content is effective. It's relatable and the regular people can get involved.

It will make it all the sweeter when we go gain mass adoption and you are one of the faces of that movement.

Personally I think this is a false flag it isn’t gender disparity it’s one nepotism which is in every industry and 2 lack of female participation there just aren’t many women in the space, simple math would dictate that!

I mean if we start this argument why are their no african people? You telling me not 1 african started a blockchain company/blog?

Finally if Binance gets to decide anything in crypto who cares? They not even a crypto company they a mining rig that turned into a cartel and offer nothing to the crypto space but a black hole!

She’s kind of like a crypto whore, goes wherever the money is.