What gives value to a project? Users maybe?

The title is a bit of clickbait, I admit, but let’s be serious and take a look at some historical user and price data. 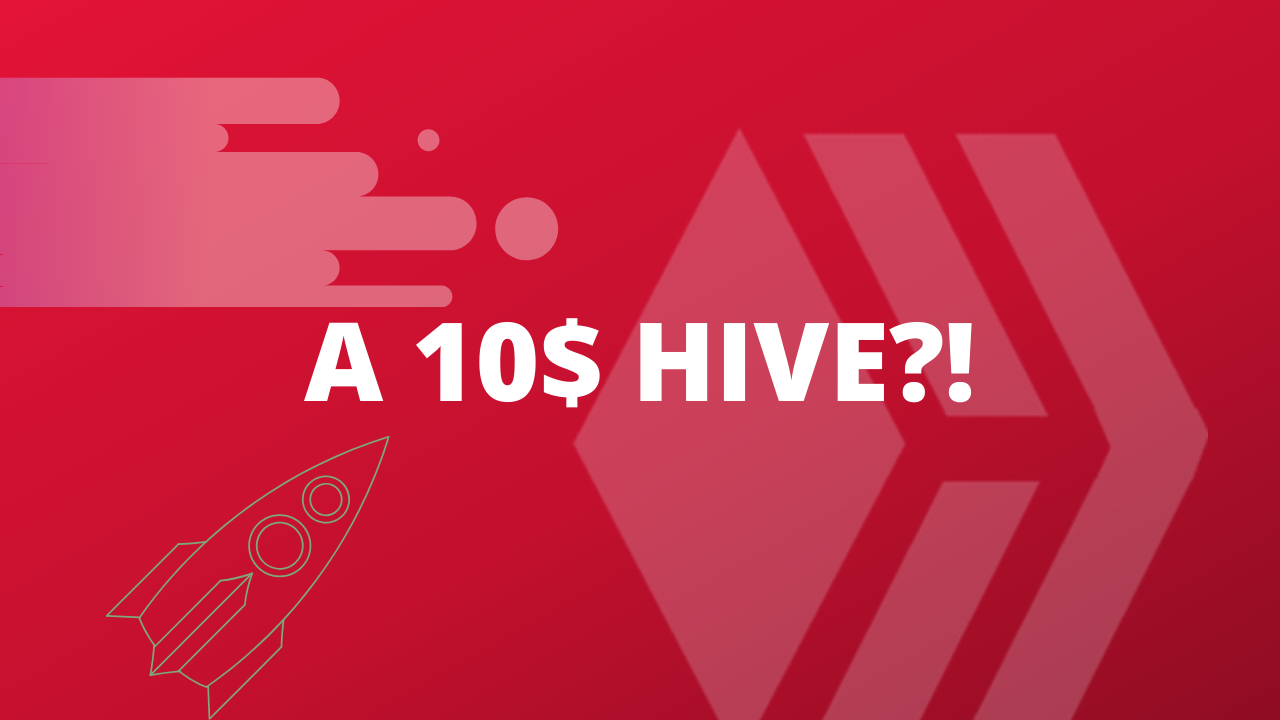 The Hive/Steem blockchain has been around for more than 4 years now. This is some nice period and some relevant data can be extracted and conclusions made.

First let’s take a look at the price chart. 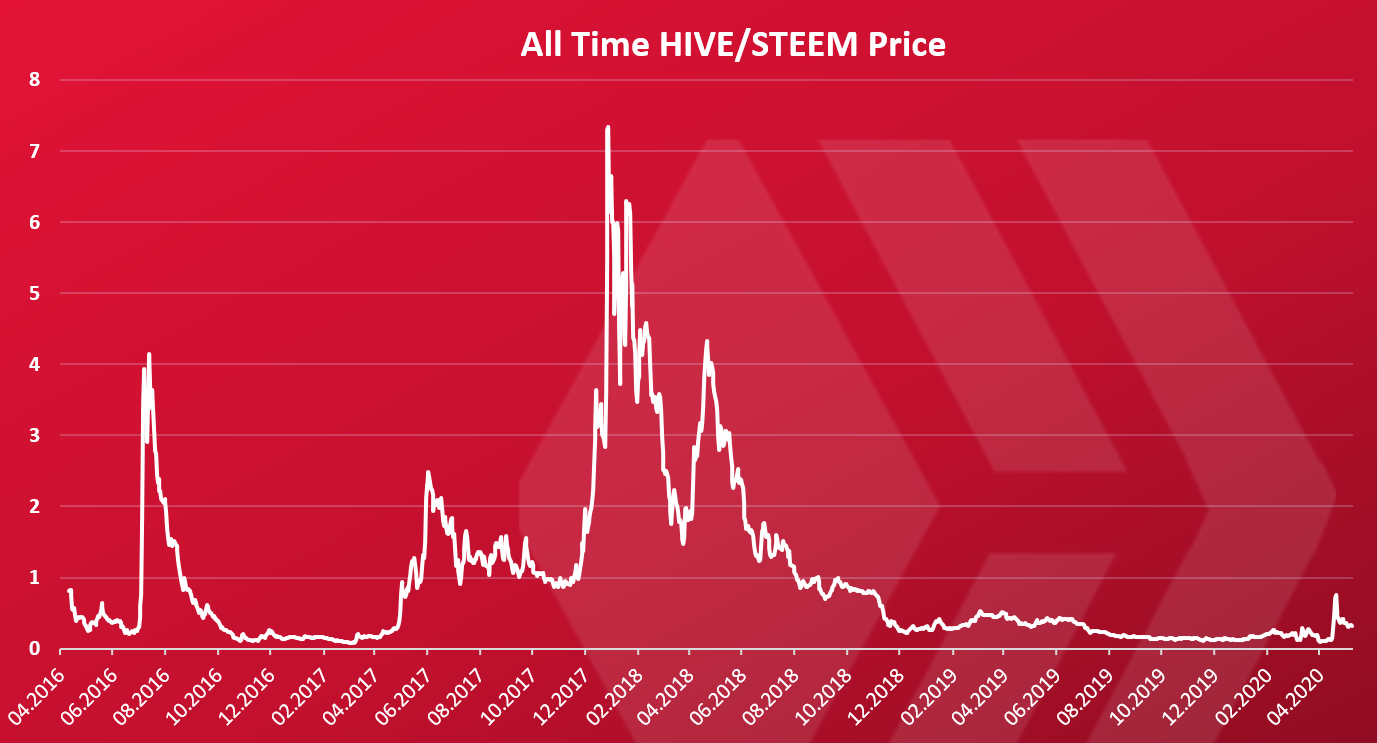 The average daily prices are represented on the chart above.

When looking at the price, users are usually focused on the all time high, that is more than 7$. The all time average in this case 0.95$.
HIVE/STEEM has been under 1$ for 1038 days, or just under 3 years. If we calculate it as a share, 69% of the time in existence.

The users number showed here are the posting accounts. More accurately accounts that make posts. Comments are excluded.
It is not the only thing a user can do on this blockchain, as there are voting operations, commenting, transactions, custom json etc. For simplicity and better representation, I have used the posting accounts, as the core operation. Also, it makes it easier to query the blockchain from the very start 😊. 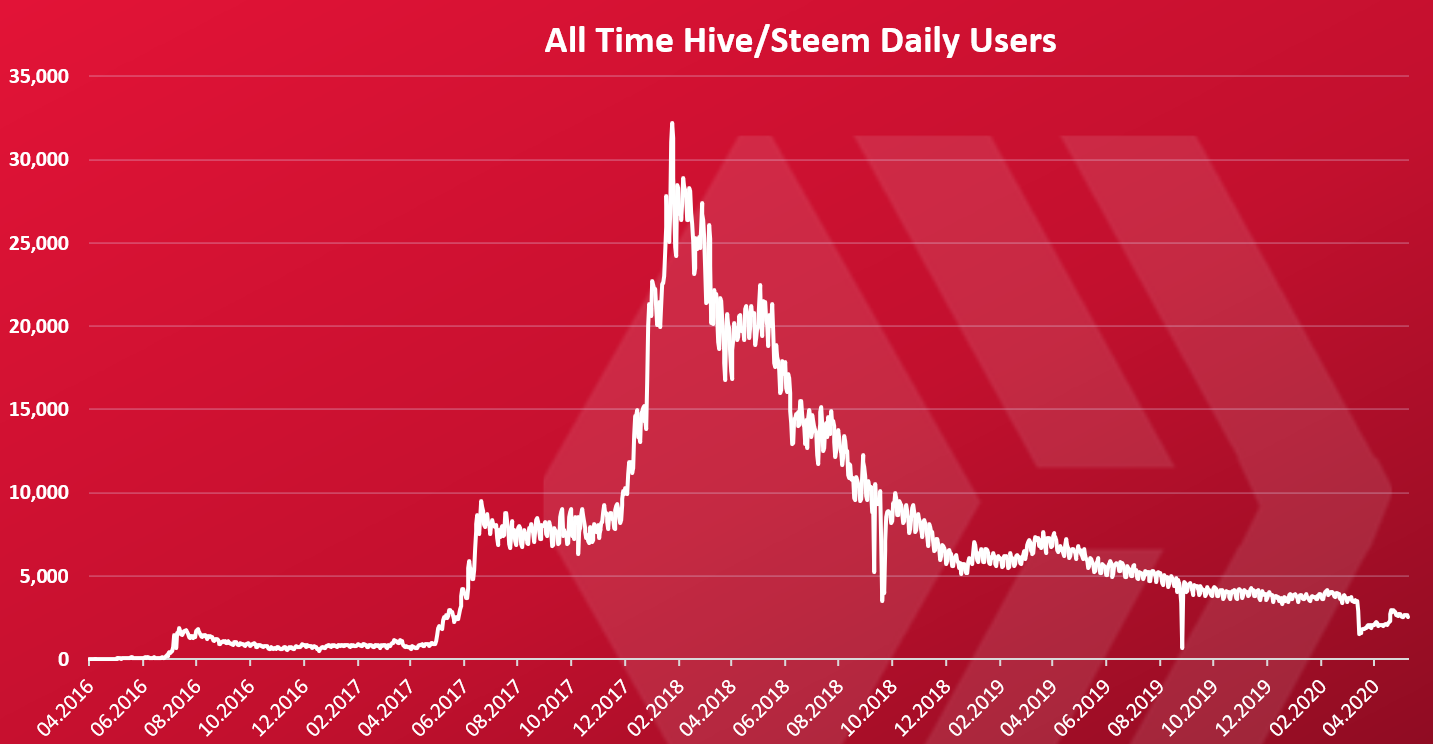 The chart represents daily unique accounts that have posted each day, from the very beginning.

The start was humble with a few hundred daily accounts posting. There was increase in the number in July 2016 to more than a 1000 and then slow decline again. In 2017 the numbers went to an 8k daily users posting and then at the end of the year the numbers really took of with more than 30k daily accounts posting. A decline followed that reaching around 4k before the Hardfork, dropped a bit after the HF and it has been growing afterwards.

Here is the chart for the monthly active users MAU. 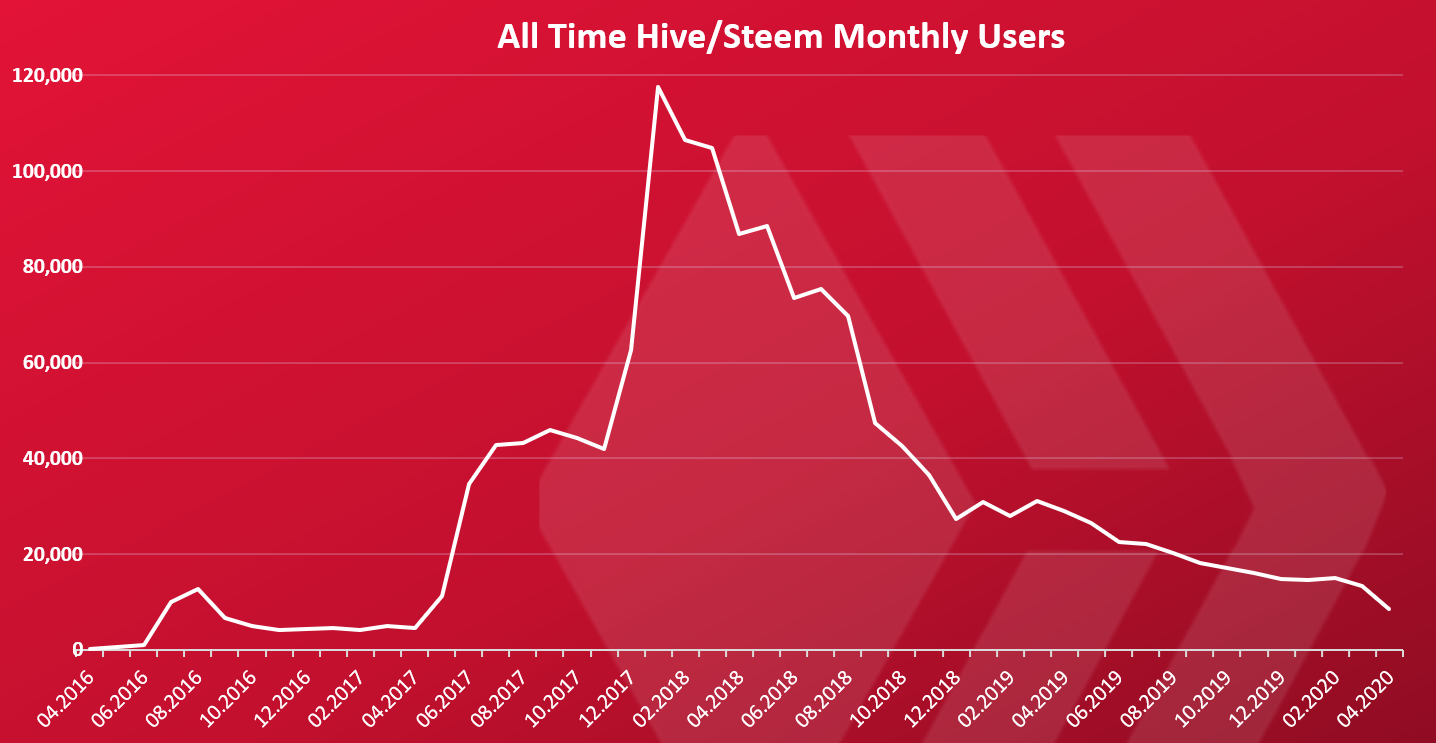 From the chart above we can see the number of unique account that made a post at least once per month. The chart follows a similar patter as the daily active accounts although the numbers here are bigger going up to more than 100k active daily account during the bull run. Recently this number is between 10k to 20k active accounts. May 2020 is still not included here as the month is not over yet, but it is showing a sign of growth.

It is known that as price increases the numbers of active accounts is growing.

But lets take a closer look at this correlation. How many users match the different price levels? Try to answer the question from the title as well 😊.

Here is the overall chart for price VS users (DAU). 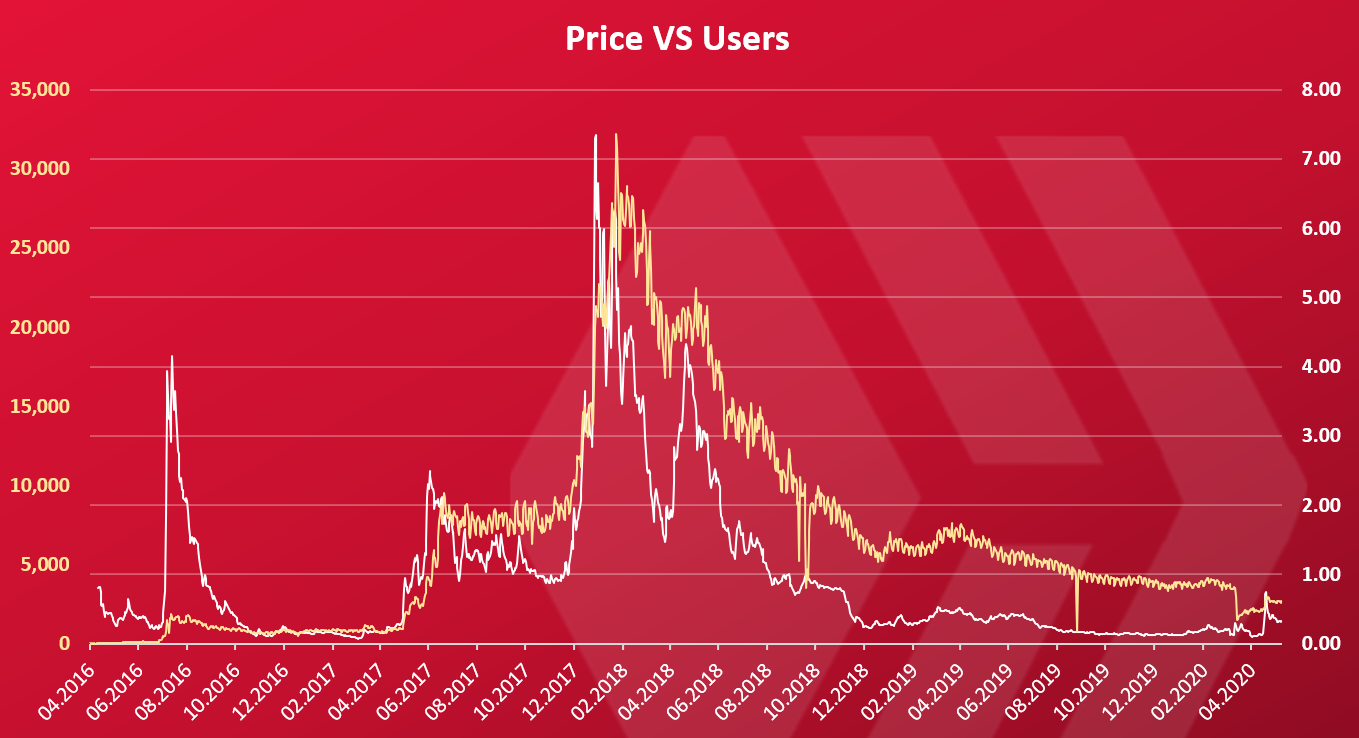 The white line is the price, the yellowish are the users.

Have in mind that the chart above has two axes, and the both numbers are at totally different scale. The chart lines can be look as a correlation between the two, not equally comparable.

Another interesting thing is that usually the price is first to take of then the users come back?

Can we do the opposite? Bring more users and then the price to take off.

Let’s zoom a bit to the last year. 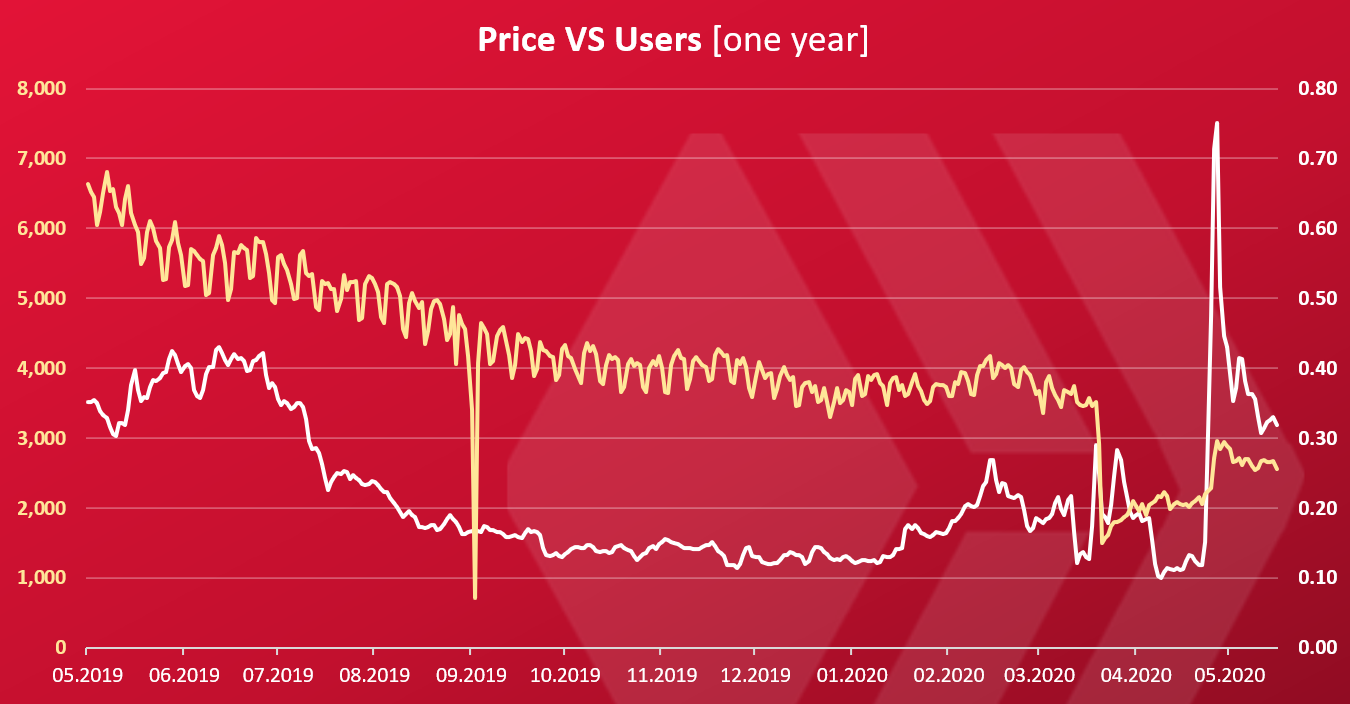 The spike in the price after the Harfork is more visible here. Also the drop in the active accounts and the growth afterwards.

Some correlation between price and users.

Since HIVE has not touched the 10$ mark, from the data above we can extrapolate around 50k daily active users.

Just a note here that the math above is just one parameter analysis. It can be totally inaccurate and means nothing. Crypto is a very speculative and volatile asset.

This said I believe that the number of active users is the most important value for a project and a coin. This is why onboarding matters. It matters a lot. If we want to have a sustainable real growth, we need to onboard a lot of new users. Each stakeholder should try to onboard as many users as possible. Communities might be a way forward for this.

What is even more interesting these numbers for daily active users are still low. A 50k daily active users, transposed to monthly is just above 200k. Imagen if we had a million active daily users and a 5 million monthly active users. What will be the price then? That is where the true potential of this platform is.

I hope we can see some growth in users now that so many are sharing on twitter.

Yea looks like we are far more active on twitter than before .... me included :)
It certainly grow awareness for the project.

This is exactly the kind of discussion I like to have. Hive has a real use case unlike most tokens out there. As currency is just 1 feature but there is a lot more going on than what appears on your feed.

There are a few factors that lead to a higher price. The first is obviously the price of bitcoin. Every time bitcoin moves there are also trades that take place. The way users behave with the token determine its use. Bitcoin as money is one thing; trying to spend and exchange it is only one aspect of crypto.

You can do this with Hive but the use cases of places to spend it is only scratching the surface. Learning to power up Hive and use your voting power is something you dont get with Bitcoin. Bitcoin wallets dont come with a blog. So if instead of Bitcoin, users started buying Hive and storing it up as Hive Power and also chose to hold more HBD as vesting in the platform. Increased demand for Hive Power and HBD will raise the market cap and also the stake users have. The more opportunities there are to spend Hive as a currency, the more demand there will be for cheap Hive.

One important thing for us to remember is that a currency needs to be used. Users with lots of HP should consider delegating to other users to help them increase their Hive Power. Use those upvotes if you have them. Voting power will recharge, so we can all choose to do good things for active users. I am powering up every week! For the next while there will be lots of downward pressure as the biggest Hive accounts powering down, sell. When Hive goes down, buy more! When Hive goes up, get more HBD! Every week invite new users and help them through the signup process.

Hive can easily become a $10 or $50 coin, if the users promote a culture of vesting more in the platform than we take out of it.

Users with lots of HP should consider delegating to other users to help them increase their Hive Power.

I think a communities delegations can be a move in the right direction, to get more active communities and people supporting each other.

On the accumulation side, also agreed. Accumulate all the way, and use the opportunities when they show up.

Idle stake is better for the small users.
Calling for big delegations is slitting your own throat.
Please do the math, and stop calling for this.

Bring in $10 Hive and you will get 50K daily users. Most of them likely alts, much like it was before.

Lol ... chicken and a egg situation. Can we do the opposite? Bring users and then the price to grow?

Also agreed on the alts etc .... wondering how many fake accounts and bots was there when the price mooned.

Not sure, I would like it if it worked users first though.

I would say that probably 90% of the accounts created and active at that time were alts. But that is just my guess. Once the pump slowed, maintaining them got too tiresome.

Very interesting correlations, stark! 200K a month really doesn't sound like very many in the grand scheme of social media!

Yes it doesn't. It is important how much they are invested as well, but that a whole different topic :)

These potential user numbers are so small in the grand scheme of things.

Great analysis that continues to highlight how much potential this platform holds.

Yep ... its a tiny drop in a huge see :)
Although it also matters how much engaged and invested the users are.

Hmmm, never thought that the correlation between active users and the price of STEEM/HIVE will be this close. It does make sense though. With that being said,getting at Hive at 10$ will be a dream come true lol,

With that being said,getting at Hive at 10$ will be a dream come true lol,

We just need to onboard some users :)

Users who get active.

It is the network effect.

There is a correlation to the number of users and the value of the network.

It is definitely a chicken and egg story. The $7 price created more excitement bringing in more users trying to collect the juicy profits. The question is what will bring more user activity without being associated with the price rise.

Chicken and an egg indeed :)

Trying to bring real users in crypto is not as easy at this point imo. Projects with a big investors behind the are struggling as well. Hive can have the network effect on a social media platform and grow....

As for onboarding - if you need an account for yourself/family/friends go to https://hiveonboard.com :)

This is a solid analysis. Thanks @Dalz for taking me into these history and facts. I'll archive them for further studies.

Really nice analysis of what it takes to reach $10

And just echoing what has been mentioned below...50k a day is nothing online!

I think the easier dapps and the blockchain are to use and onboard to, we'll see the 50k in no time :)

Looks like 50k in crypto is a lot :)
Especially an engage and invested users.

At least at the current level of development.
Hope we fly by that number soon.

Oh in crypto it's massive...But Maybe that's the issue...

Start branding HIVE as a platform, not a blockchain / crypto at first.

Let people discover the crypto aspects of it once they are onboard and start playing and engaging with the dapps :)

Start branding HIVE as a platform, not a blockchain / crypto at first.

Interesting thought .... I was also thinking that onboarding should go in steps .... like first you create an account with mail and a password .... later if wanted to claim the keys and start managing it..... later gain right for voting witnesses, proposals etc ....

50K users on the Internet is nothing.

In comparison, SeekingAlpha has 15 million monthly active users. Ask most on Hive what they think about SA and they wont know what it is.

That is how little is truly required to make things explode higher.

Yes I agree .... the numbers are low. We just need a little push :) The potential is enormous.

Hive is a force of it's own self. Users data base will increase exponentially in the shortest possible time. I know this for sure because I believe in hive blockchain

I would use stats only from when the HIVE was truly born and not the history from when it was Steem as it is a different path that it follows. There are different visions and developers working in these projects, so let's distinguish them and have the right conclusions for each one.

Great analysis. Need more hive promotion to invite active users. Most of the people waste their time on useless social media but they don't know about this great platform. Hive community already proved it strength. Hope in future we will get million active users.

How many of those early accounts were sock puppet bots posting to inflate user stats?
I think we are finally losing those folks.