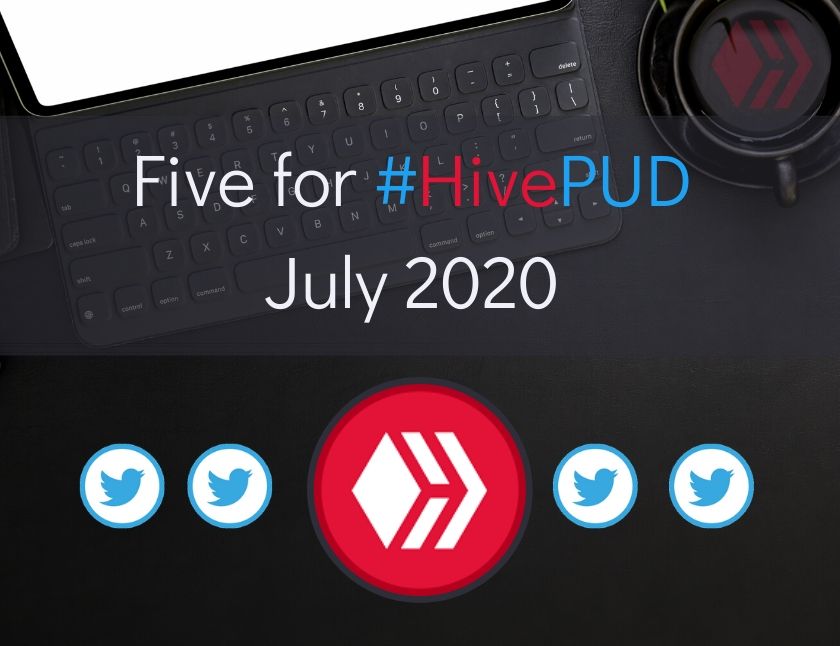 As I said in the recent #HivePUD winners post, I'd be doing a separate post about a new twist on @streetstyle's #hive-pud-intl tradition, the pre PUD post about powering up. Here are the details!

How did this come about?

When I was putting together the announcement post for #HivePUD in June, I hadn't yet thought to ask for @abh12345's help in tracking down the stats, so I decided to simplify the process (at least for my first month at the helm) by removing the requirement of having a pre-#HivePUD post. The more I thought about it though, the more I realized that it's an excellent thing to do in order to get the word out.

Then after Asher saved the day by valiantly agreeing to assist with the stats, I really started to think about how I could incorporate having people post about Power Up Day beforehand with some sort of separate challenge. And while @streetstyle isn't a Twitter guy, I do spend a fair amount of time there, so I toyed with the idea of making some sort of pre-post and tweet thing together.

My first thought was to make it a twofer - one post and one tweet would make one entry into a giveaway. Then I started seeing @nathanmars awesomesauce #Hive5 on Twitter...

I decided 5 was the perfect number! Then the rest fell into place - people will now have a chance to earn 5 entries into a drawing for a bunch of different prizes, by spreading the word on the blockchain and in the Twitterverse, even if they don't qualify for #HivePUD prizes because their reputation/Hive Power is too big/small, and even if they aren't going to power up on the first.

Every month after I (or @streetstyle after he returns) post the #HivePUD winners announcement on the 5th, I'll do a, "Five for #HivePUD" post like this (but more concise) for the month. As I said, you can take part even if you don't qualify for PUD prizes, and even if you don't power up! This is more about getting the word out about Power Up Day, both here and on Twitter.

For a total of 5 possible entries!

The number of winners (which I'll announce in the OFFICIAL WINNERS LIST FOR #HivePUD (Hive Power Up Day) on the 5th of each month) will depend on the total number of prizes. So far, I have 5 confirmed prizes, which are -

If you're interested in sponsoring a prize, please shout out and I'll add you to the list.

What do I have to do to meet the criteria for each entry?

The main criteria for your post is that it must contain at least 250 original words about powering up (as in, adding bits about PUD from the official post is wicked nice, but won't count towards your word count total). Other than that, the choice is yours - you can write about why you want to power up, what you know about what powering up does, what your plans are for the future with your Hive account, how you're spreading the word about PUD (and/or why), why you will (or won't) take part in #HivePUD - as long as you're talking about powering up on Hive, you can choose any angle you like!

Please keep in mind though, that if I suspect your entry is spun from someone else's work, I'll most likely ask for a second opinion, and if the general consensus is that your post is not original, it will not qualify as an entry. I have a crack team of awesome experts (you know who you are) who I know I can ask for help should the occasion arise.

The main criteria for your tweet(s) is that it must contain at least 25 words, including the #Hive and #HivePUD hash tags. That's about two sentences worth, so it should be easily doable. Other hash tags and/or handles also count towards the word count total - here are some I recommend (and feel free to shout out with others, including your own, and I'll edit them into this list), in no particular order -

Adding a photo or GIF helps get eyes on your tweet, but isn't necessary. Speaking of, I have another thing I'm working on (an announce post for another day... 😂) but for the short term, you're welcome to peruse my GIPHY account to see if there's anything you'd like to use.

Pretty self explanatory - I want to make sure I have plenty of time to double check entries, and make sure they meet the requirements

Reply With Links
To save what little bit of sanity I still possess, your entry won't be valid unless you drop a link to it below. You can reply multiple times times to drop your (maximum) five links. Oh, and you can post and tweet as many times as you like as the month goes on, but once you've hit your 1 post, 4 tweet limit, all the rest will simply earn my unending gratitude, not extra entries to the drawings.

How will I know if/what I've won?

I'll announce the winners of the Five For #HivePUD drawings at the same time as the Official #HivePUD announcement post goes up, on the 5th of every month. If @streetstyle returns and resumes running Power Up Day, I'll simply reply to his announcement post with the winners, as I've done with my giveaways in previous months.

Can you say it in fewer words?

Winners announced on the 5th via the #HivePUD Official Winners post

I think that about covers it! Please feel free to shout out either in the comments here, on Twitter, or Discord if you have any questions, and happy Hiving!

Great idea, @traciyork and great work! I will continue my 50 hive delegation to a redfish and will say more about that in my pre-#hivePUD post...

I'm totally convinced that you've cloned a few more Traci Yorks now. No wonder you're all over social media! 😁

I decided 5 was the perfect number! Then the rest fell into place

Keep up the good work girl

Bang, I did it again... I just rehived your post!
Week 13 of my contest just started...you can now check the winners of the previous week!
6
$0.00
Reply