Teaching Children About the Divine Law 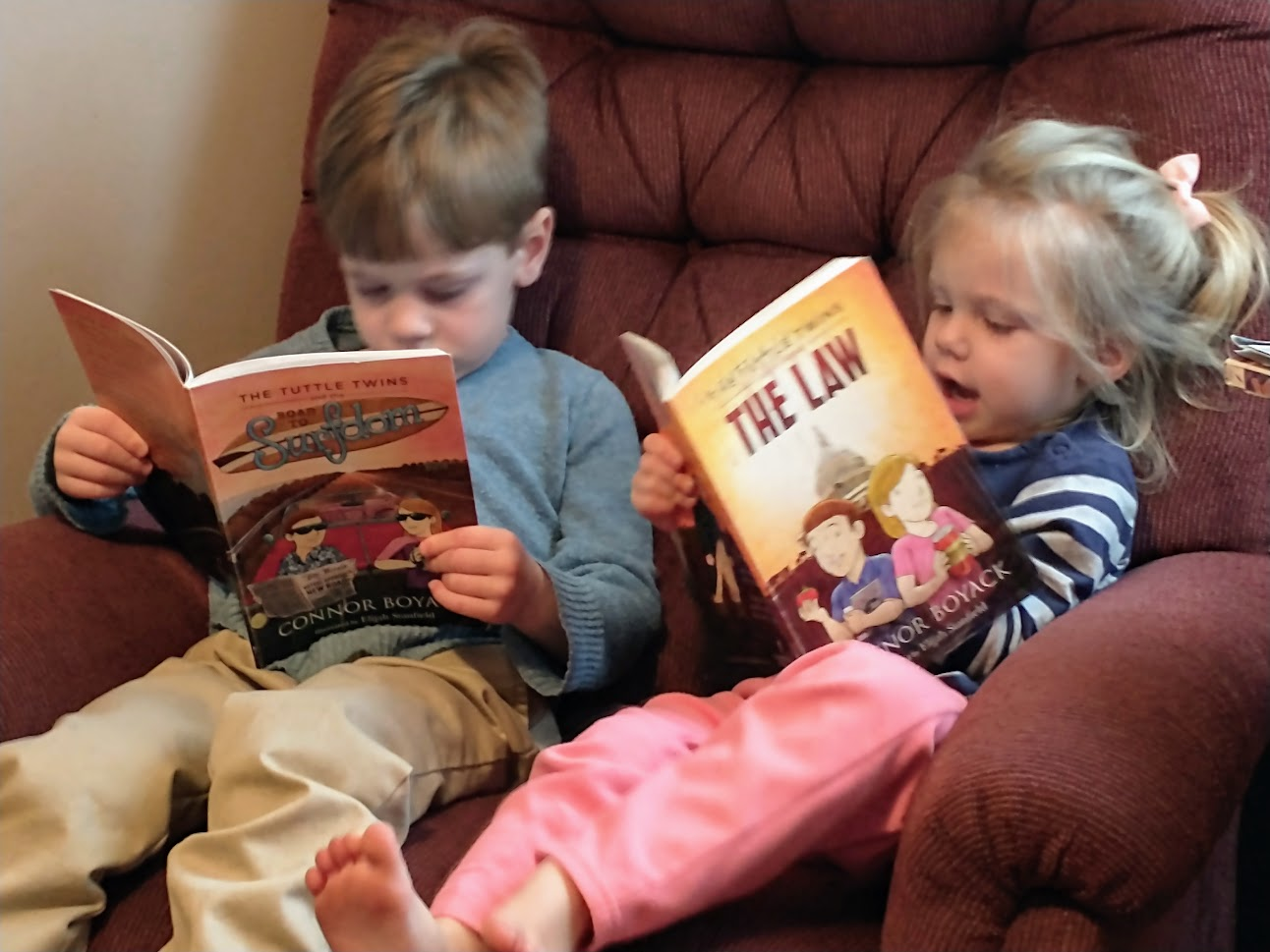 Even my two and four year old enjoy looking at these books!

We Are A Divine Law Family

This is why we resist ungodly and lawless laws. We are not anti-authoritarian, unless the authority is over-stepping their bounds and oppressing the people. We are anti-tyranny advocates.

The answer is found in the very first FOUNDATIONAL Tuttle Twin book, entailed "The Tuttle Twins Learn About the Law".

We May Rebel, But We're Not Rebels

We teach our children about Divine Law, that the Most High has created an unchanging and eternal moral law that no government can modify or annul. EVEN DURING AN EMERGENCY.

These are just a few points of the divine law that is eternal and unchanging.

People have Asked Us About Anarchy

We are not anarchists, even though we share a few things in common with people criticizing the STATE. We believe the purpose of the state is for standardization and order, with most of the "regulation" up to the individual. Volunteer army, recruited State by State. If the volunteer army disagrees with an "mandate", they are free to leave with honor. Taxation should be minimal and voluntary. Representation should be accurate, if not representatives should be quickly fired and replaced. Voting should be done by PAPER, with great oversite. Greatest power should be held by "we the people" who submit to the Divine Law, local municipalities should have greater power than individual states, who have greater power than the Federation of States.

THERE SHOULD BE NO FEDERAL GOVERNMENT. This is how we explain to our children how we as lawful people would disobey certain laws or "mandates". We appeal to a higher authority, an authority that allows people to rule over us in government as long as they uphold justice and righteousness, consistent with the Divine Law. This is how the United States has been blessed by the Most High God. Once a government abandons justice and righteousness and issues rules, mandates and policies that supersede the Divine Law, the blessing is withdrawn, the government will deteriorate, usually ending in famine, war, ruin and destruction.

In order to maintain the blessing (as so many say) "God Bless America", we cannot continue down the path of oppression. Medical apartheid. Family against family (over an illness). Intentional pressure placed on people to participate in a medical experiment. All of these will bring on the WRATH of the MOST HIGH, and the righteous and the wicked together will suffer together.

More Than Awake: Awake and DOING

Laying in bed with our eyes open will accomplish nothing. We are no different than those who are asleep. We are diligently teaching our children about the Divine Law and about the world around us that is increasing in wickedness. We point out things that are GOOD, we point out things that are BAD. We teach our children how to discern between the two, according to the standard put forth by our Creator.

Lawless laws are not laws at all.

Great way to teach your kids and I totally agree with you on the Divine Law. Its good too see more people that have similar beliefs or truth really and speak about it.

All right! I never knew we shared so many views on things regarding the state. Volunteer military, volunteer taxation, completely agree. In fact, once these things become fully optional, there may be a much greater incentive to participate. Also, local power should be above regional power, regional above state, state above federation, and no federal gov't, period.

The only thing I don't agree on is voting on paper. Since that is so much easier to forge, it would require a much greater oversight, which itself is corruptible. Instead, I favor a system that is specifically built to be resistant to these flaws. That's why I have my hopes set high on blockchain technology. Not only would it make it much easier to guarantee no more than one, instantly counted vote for every individual, but it could even automatize representation, if not completely bring things down to the direct level.

Thank you for your comment! One thing I really enjoy about people who are attracted to immutable and (mostly) censorship-free blogging, is that they are much more able to see the reality through the programming, that a more just society can only be achieved when the calculator is accurate. That nothing can be done to fix the problem, unless the presumptions are accurate.

The paper voting is (in my opinion) an emergency stop-gap. It's fine to use digital technology, maybe even blockchain, for voting - but the system in place now is completely fraudulent. If we switch from a fraudulent digital system to a "secure" digital system, it will go terribly wrong. It will lend a false assurance that the results are accurate, when the switch-a-roo happens en route, outside what is immutable. Garbage in, immutable garbage out.

The more information that's coming out, the more evidence is detected about how enemies foreign and domestic have hijacked our election system, taking away the will of the people, the more need we have for some sort of drastic election reform. Time to start over with paper ballots with ID required and NO ABSENTEE BALLOTS. We can upgrade from there.

Exactly, the rigged calculator. That's one of the things 1984 exemplifies so well: 2+2 will never be 5, no matter with how much force you threaten people to say so. However, it's also true that once someone has been broken into accepting 2+2 to be 5, it will seem so true to them, that the 2+2=4 will cause serious problems for them. Sadly, this is precisely what I see happening. Boy, how those broken calculators resist simple reason!

I agree that trying to fix a system that has been flawed / corrupted for so long will only end up making it all worse, and starting out from scratch would be a better approach. In this sense, I would even say that the body of issuing and validating an ID may be just as flawed, let alone the ID itself.

Oh, this brings to mind my shocking incredulity when I saw American under-21-year-olds forging official documents with the greatest ease, as kind of a social pastime, only to get to indulge in the other pastime of drinking. In comparison, back in Germany I could legally buy myself a beer at 16, but even if I'd tried to do so before, nobody would have ever asked me for an ID. If they thought I looked too much like a kid (very likely if one is under 16), they would simply refuse the sale. But what was I trying to say here? Oh, of course: alcohol suppression, and ID fraud.

IDs can be faked, paper ballots can be forged, etc etc. There's no way to eliminate all voter/election fraud, the idea is to make it impossible to steal an election.

As "we the people" become more and more dissatisfied with the "leadership" we always think we can "vote the bums out", but once that power is taken away, it doesn't mater how much we chant "let's go Brandon". There will always be some sort of demonic Brandon ruling over us, until something is fixed. 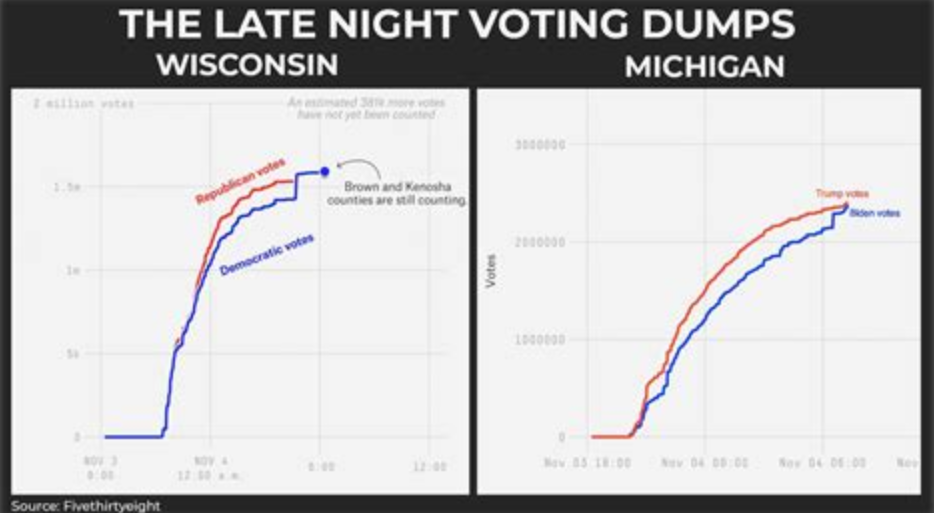 Sounds like you really need to know that the Great Law of Peace is a Native American gift to the founding fathers of this country because they didn't have any words or ability to understand true freedom.

It would be interesting to compare the "Great Law of Peace" to the "Fiery Law at Mt Horeb". A God is known by His worship and His worship is known by the obedience of His people. One way the Divine Law is summarized is with "Do to others as you would have done to yourself" or the reverse "do not do to others, what you would not have done to yourself"

Actually it's pretty crazy how much that every civilization has these common Sense rules traditions and knowledge that has been passed down.

For a while I got to live in a monastery. Vedic one. Thier book is extremely old and the oldest surviving copy of a copy was dated at 8,000 years old. On top of that we have so many issues with our own past and our own lost history.

There is nothing new under the Sun and what would really suck is that if we were all taught the entire wrong version of History.

Here is one for you. In The Vedic traditions Jesus spent his first 30 years in India learning from the sages and yogis. In fact they claim that Jesus escaped from Israel and the Romans wow one of his friends that looked remarkably like him was the individual crucified by the Romans. Their tradition is that Jesus lived to be an old man.

And then how about the world's oldest books shedding some amazing science fiction...

For us to know who we are we must know where we came from and currently everybody's arguing about exactly that.

It is quite a rabbit hole that I fell down...

Fascinating! I don't think we have the complete story of Yeshua recorded and if the whole truth were laid out in front of us, we'd be shocked. History is not nearly as reliable as we thought. I don't know about the Vedic or if Yeshua was ever in India, only God knows. He is the God of the Indians just as much as He is the God of the people of the book.

There is nothing new under the Sun

Some pretty crazy things if you start reading the oldest books.

Personally I'm only roughly 200 years away from the Stone age with my Native American heritage. Knowing where we came from and trying to decipher our oral history... As well as getting our history immortalized in a book series...

I am actually a branch of the Uto Aztecan dialect. Relation to the Aztecs. Pretty crazy the civilization that was here.