My Setup as a One Man Guitar Band - Pt.2 Guitar and Bass

In this part i want to talk about my setup for the guitar sound. If you haven't read it, maybe take a look at pt1. first, as this is a series of articles:
My Setup as a One Man Guitar Band - Pt.1 The Drums

It's basically it's splitting the Pre-Amp out signal. 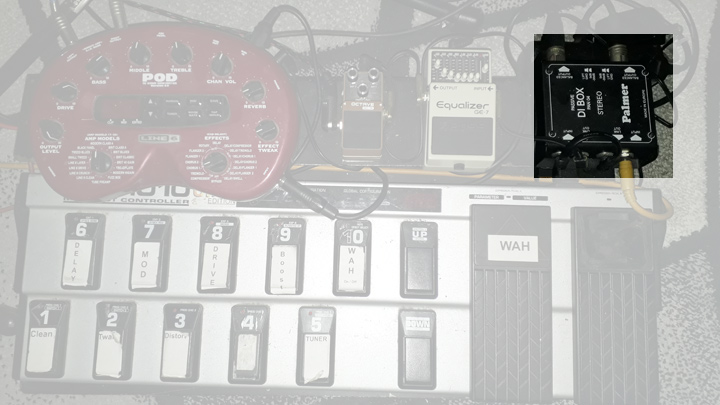 From a DI Box (Guitar Line In) with two channels, i receive 3 outputs .

The DI's 1st Output goes direct to the Patchbay (Rec / Live Mix in) to receive a clean signal i can base a natural Sound on.

The DI's 2nd Output becomes the
Bass Guitar
The signal gets EQ'ed (heavily cut in the high Frequencies) highlighting the bass frequencies, linking to a Octaver 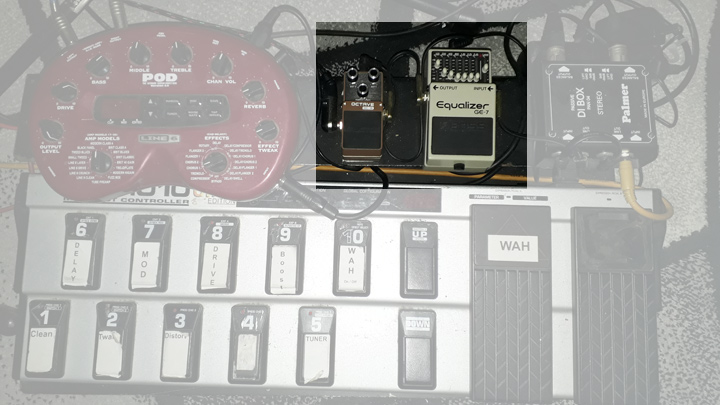 Just the EQ gives me a Bass boost when needed to the acoustic sound.
The Octaver get's engaged when the songs are in what i name re-plugged.
Due to the heavy cutting by the EQ i get a quite clean bass 'line', even when playing Chords.

In this image you see the sources i record for the Bass sound. the built in C411, Line and Line with Octaver.

The DI's 3rd Output becomes the
Guitar
A Guitar Preamp makes all the FX. In my case it's a P.O.D. 2.0 (I know it's old and controversial ;) but it does the job the way i want for live). 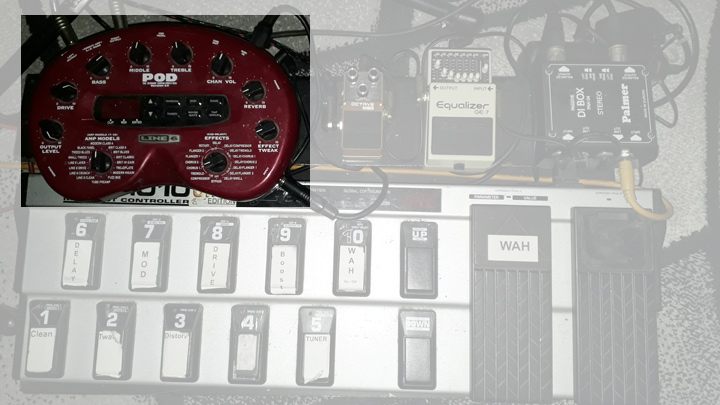 When playing acoustic it provides mostly reverb and modulation FX to the mid frequencies. On re-plugged songs it's treated like an electric guitar (even with distortion). The Pre-Amp delivers a stereo Output to the Patch Bay.

I access the sounds via the Pedal board (maybe, one day, i'll do a: all my pedal board switches ' article :).
The four Switches of the bottom row change sounds, and the entire upper row switches are stomp boxes (Delay, Modulation, Drive->Distortion, Boost, Wah-Wah).

This Screenshots of my new re-plugged song (it contains an acoustic and a re-plugged part) show you how i use different sources:

When recording Acoustic Guitar i always rely on Microphones and not just the Guitar Line. As you can see i recorded, the Direct (DI's 1st) In and the Bass(DI's 2nd), and three Microphones (Git Rhythm Ambient).

Hope this wasn't to boring.
If some of you want to get in idea what it sounds like, visit me on youtube (and please leave a like:)

Two more parts are planned so far (Vocals and mixing the sounds)
Stay safe, and have a wonderful Easter time!