sarahewaring (67)in #philosophy • 6 months ago (edited)

Philosophy is one of those subjects that can sound both fascinating and incredibly boring at the same time. 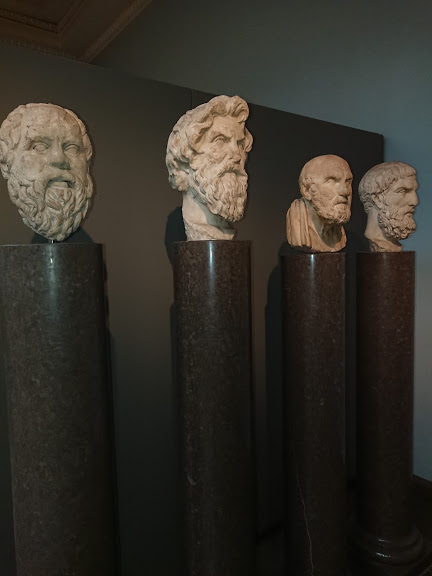 Image - The Philosophical heads photographed by me at the London Museum.

I used to think philosophy was studied by the strange and pompous middle-aged, with nothing more to do than stare out the window after reading a bout of poetry. Dressed in a frilly shirt, that said middle-aged romantic would be doing nothing useful with his studies other than filling his mind with irrelevant material.

What? I'm being honest ... even if its far from the the truth.

I may be middle-aged, but I don't regard myself as pompous ... although I do like a bit of poetry and I often stare out the window ...

No, no... I'm not pompous and the material IS relevant AND I haven't wore a frilly shirt since I dressed up as meatloaf one year.

Anyway, why should anyone study philosophy and what would you achieve by studying it?

I took myself by surprise when i chose philosophy as an add on module for my creative writing degree. But it was the only subject that vaguely interested me. Learning about different perspectives of our society and psyche, I thought would be mildly interesting - The nosy parker in me was intrigued.

I never actually expected to enjoy it so much. Philosophy, basically, is the study of all theory that can form any discipline. Take psychology for example, the research theories created pre-psychology produced effective arguments to form the discipline. These arguments were created by scrutinising various theoretical theories of the mind.

That, my friends, is philosophy. The fundamental research that is created before any kind of discipline.

Is that just an opinion?

No. The difference between philosophy and opinion, is that an opinion is formed from a personal bias and philosophical thought is based on a range of arguments for and against a cause.

I do have the mind of a philosopher and I think this is why I enjoy it so much. I don't hold strong opinions without researching any arguments. I have always been the same. I never jump on a bandwagon of opinion without going through the defence first. I should have been a lawyer, but I'm too soft for that.

I'd sooner have a nice chat and a scone with a hardened criminal than try and prosecute them. Never really been great with tough love.

Anyway, going back to why we should study philosophy. I am weirdly obsessed with lists (The weirdness come from that fact that I used to detest them.) Now I am a changed woman ... maybe they had a good defensible argument and that's why I Iike them so much now.

Before you read my list I would just add that Philosophy is quite a tough subject. It is quite academic and there is a lot of critical analysis involved. However, it is balanced out by the interesting content ... in my humble opinion.

Anyway, I am going to write you a list of ten reasons why philosophy is a useful topic to study.

Ok ... so here with have 10 reasons to study philosophy. If you have anything to add ... please do.

Thanks for reading and stay safe and well !