Let's Talk Turkey - What does it say?

This guy can't talk, but if he could, he would tell you that the prices are going up. He's from Brazil so he could say Bom Jee-ya I guess. I made a video of the protests in the city the other day and they had a banner of the Fat Cats and their dinner table. That part is right at the end.

Point is, that today is just an ordinary day because we do not celebrate the pilgrims and all down here in South America. That stuff is only celebrated in the postage-stamp size country up north . It is still one of my holidays though so I try to find a reasonable facsimile of the traditional foods. This Turkey was purchased a few months ago. I buy them when I can because they are not important on any certain day here. This one cost $3,578 way back then, sixty days or so? The one I bought and cooked for a birthday party last week was $6,000 (same weight - about five pounds). And for comparison, this one was $630 just six years ago.

I know these kinds of posts have been ignored in the past because really... Who cares how much things cost in pesos? But, now that the U.S. is a third world country, you are all experiencing similar paper games.

The price has not moved a bit for me. Bitcoin was around twenty thousand back then and it is near that price now. The amount of dollars or pesos I spend to take a turkey home has not changed, though turkeys cost almost nothing when bitcoin was over seventy grand. It will go there once the dollar is viewed like the peso is today.

I was just putting the turkey in the pressure cooker and heading out to pick up some veggies and i thought you all needed a reminder that all is not lost. Yes, this little guy fits in my pressure cooker. Another bright spot in the day.

... and don't forget to thank the same God that the settlers did long ago.

Now I understand why the country Turkey changed its name to Türkiye. hahaha.

Thanksgiving in your country of birth is a beautiful celebration that should be replicated everywhere, especially in countries made up of immigrants and pilgrims like mine.

We've been celebrating Halloween for a long time, I don't see the difference, although perhaps it's because it's funnier and candy sells more than turkeys, partly because of its price.

We also celebrate other foreign festivities here such as Saint Patrick's Day, which is a little more understandable since the beer is richer than the bird.

Thanks Hector. Did you get the visual? Talking turkey? I wanted something in the picture to show the size of this tiny bird (headphones) because in The States, the birds weigh in at 18-20 kilos. If you search for it, you may find a story on Biden pardoning a turkey (letting it live), which is another tradition in my country.

Here is the last one Trump pardoned... 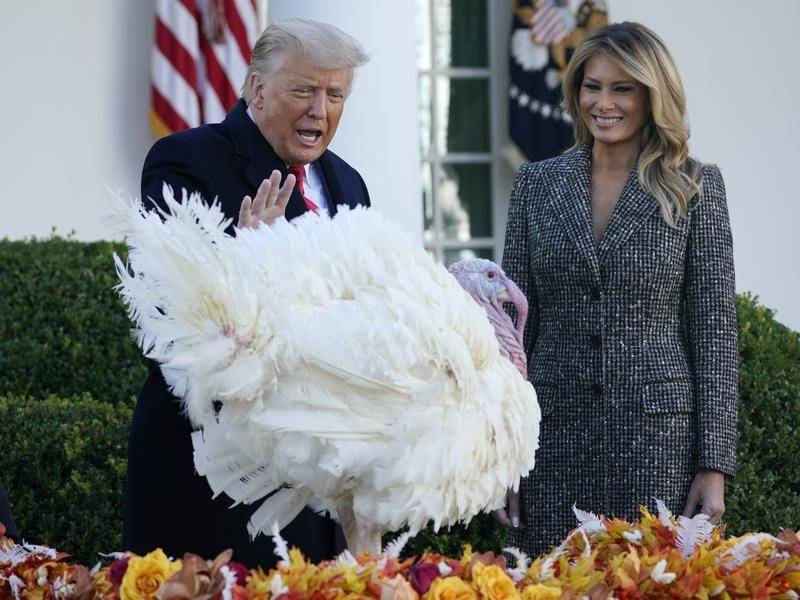 These are not little animals.

Oh! yes, thanks!
He knew the story of the forgiveness of the turkey, thanks to the photo of Trump, but he did not know that this gentleman forgave something. LOL