Behold- The view of Soufriere from Samfi Gardens 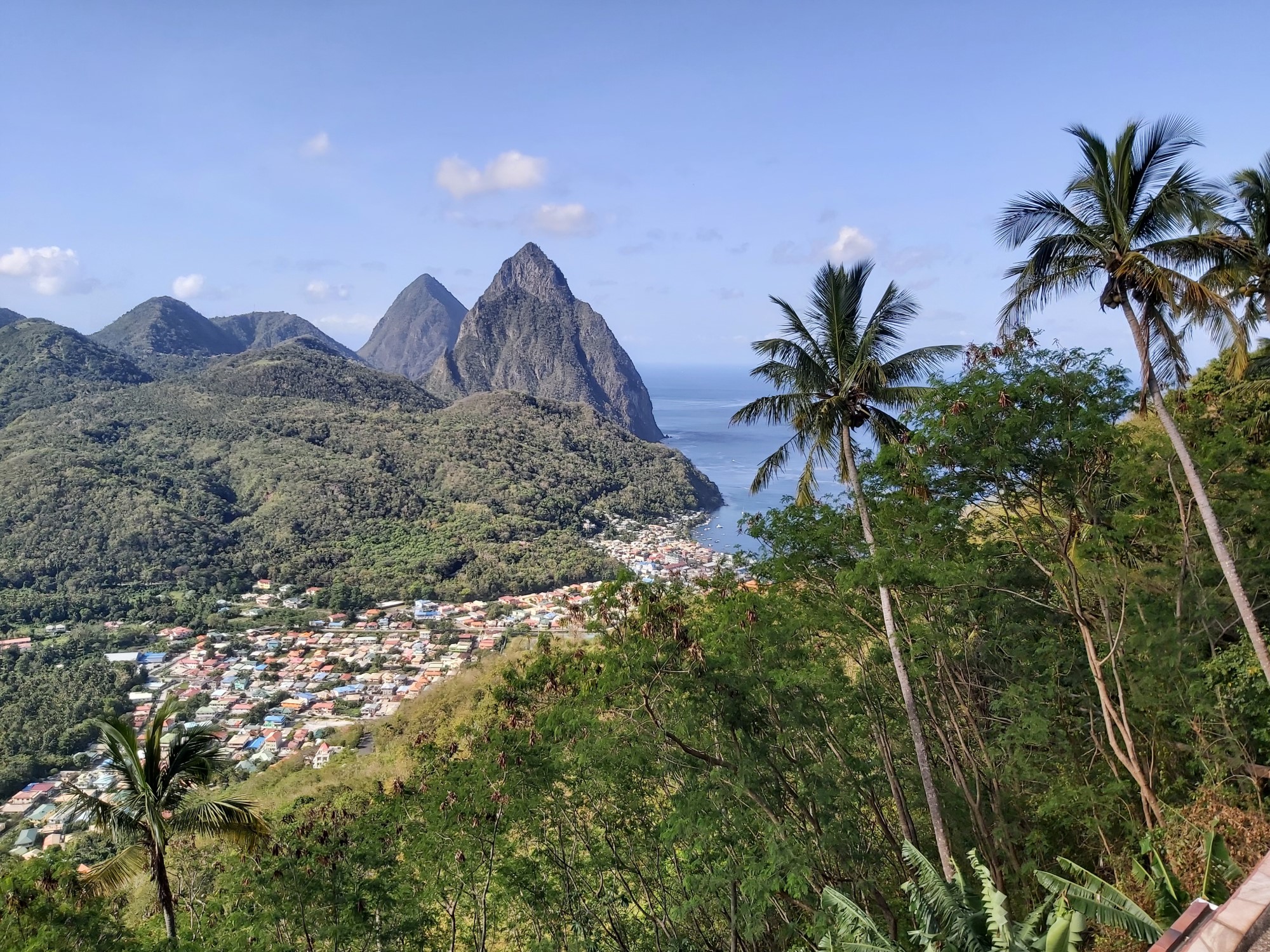 It's hard to get a more picturesque view than this, and no we weren't at some highway stop or restaurant. This was the view from our balcony at Samfi Gardens a 2 star hotel with a 4.7 Google review that is $250 a night and difficult to book during the high season. There are other amazing hotels in the area with a view of the famous Pitons, those triangle mountains I wrote about in St. Lucia Part 1 but the fancy places can get real expensive. 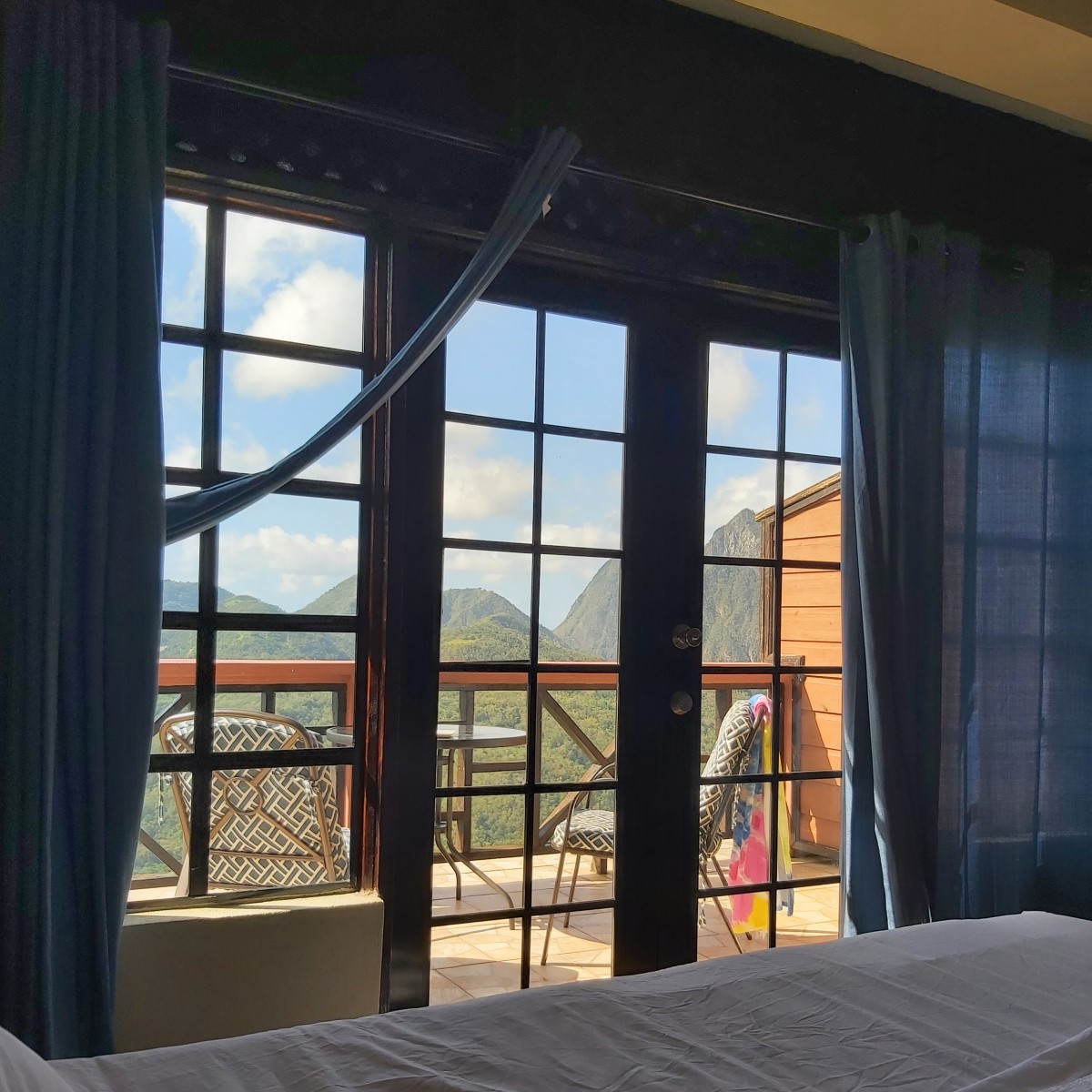 While many people were worried about securing their 2nd boostershot, we thought to take advantage went somewhere that is usually booked solid and/or unaffordable. Having just come back from a two week stay at a 5 star hotel in the Dominican I'll write about later, we chose a more romantic retreat. The property did not have a restaurant and some of the businesses were closed because cruise ship tourists just weren't visiting. There was a few restaurants in the area but generally you had to take a cab to get anywhere as walking on the streets is dangerous and the property is obviously up in the hills. There was a handy kitchenette in the room. 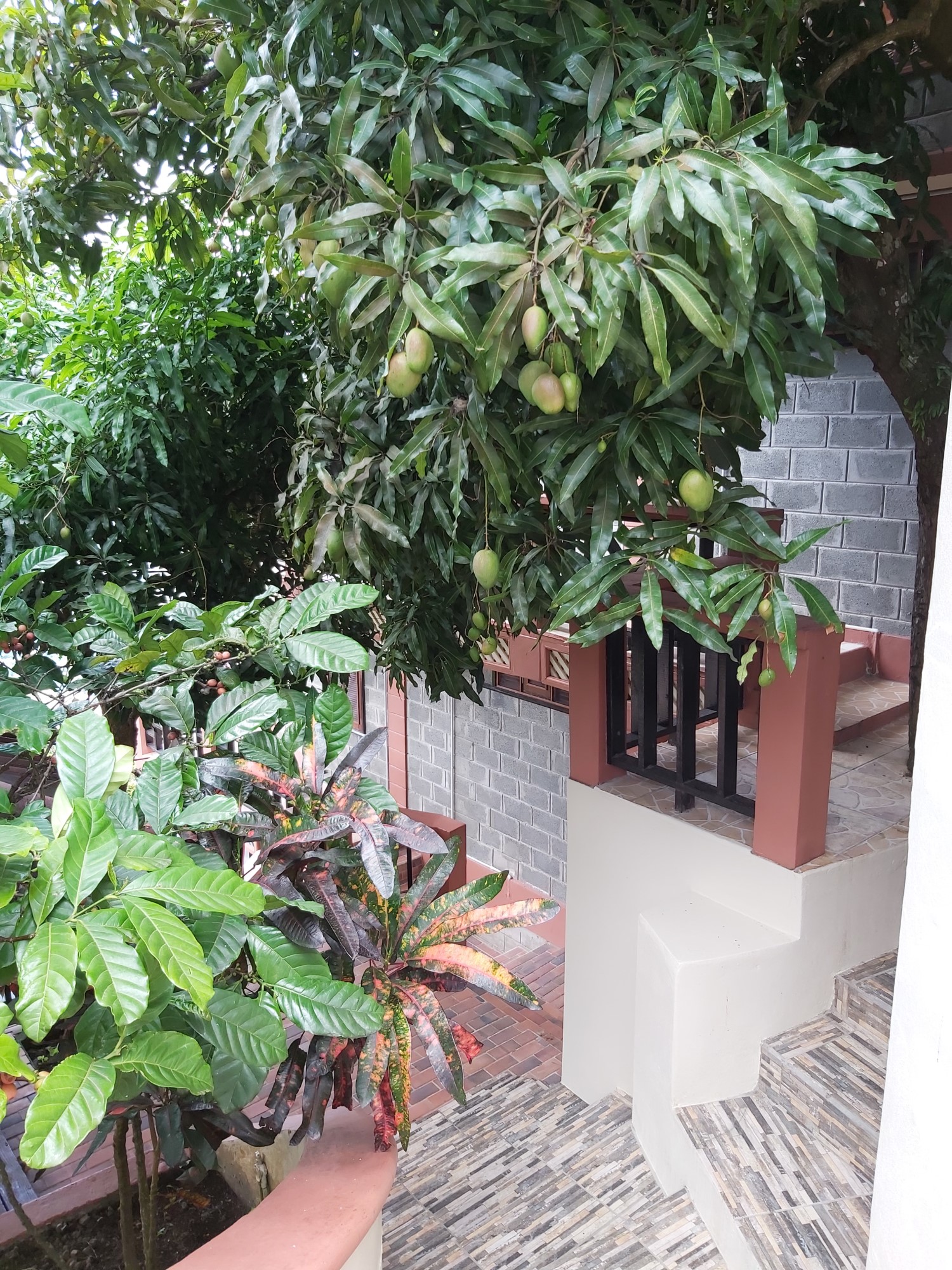 The property had an infinity pool and relatively well kept grounds. It wasn't too busy which was nice and away from the hustle and bustle of a large resort or the town itself. The mangoes were just getting into season by the looks of it. 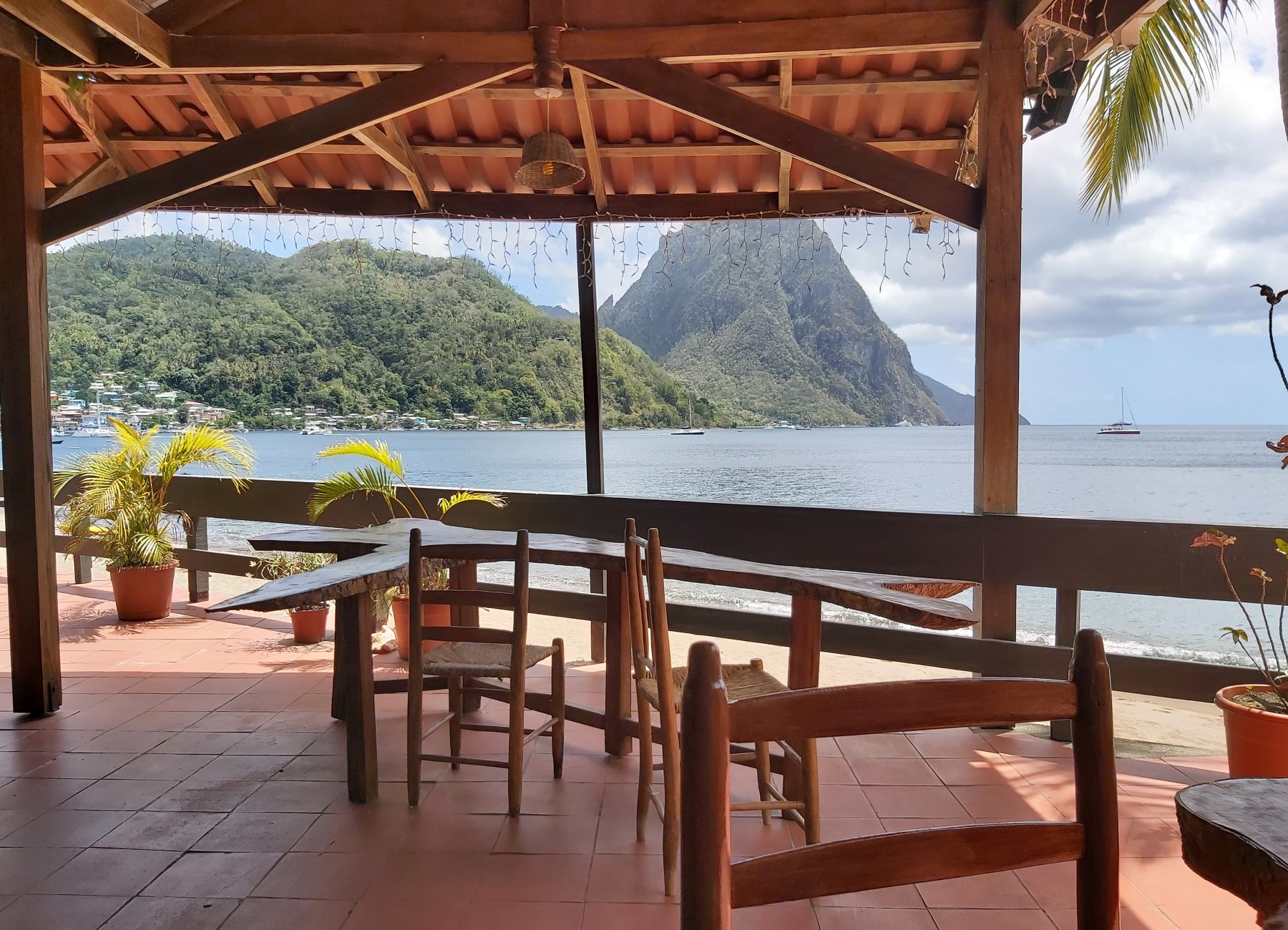 There were great restaurants in town and even better ones on the cliff. Most of these photos were taken with an Iphone 11 or Samsung A47 and unedited except for cropping. We took lots of photos and the area was relatively quiet. Service was easy to come by and the patio only had a few visitors each evening. 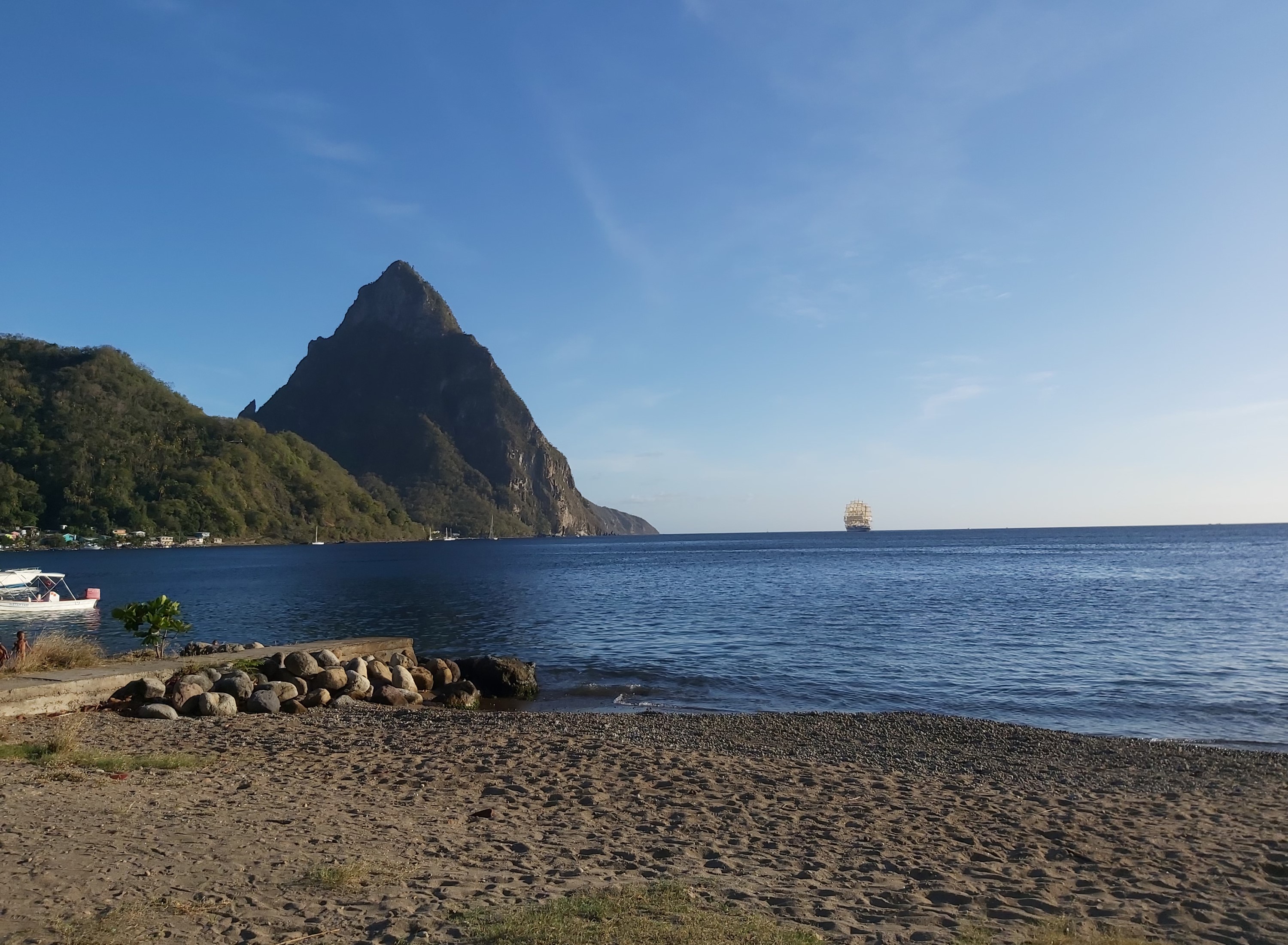 A tall ship dinner cruise and adventure is off in the background it seems to have come from the north, near the capital. The Castries area is where many of the tourists stay and the cruise ships dock. From Sandals, the Royalton or the other honeymoon specials, going to Soufrier is a popular day trip 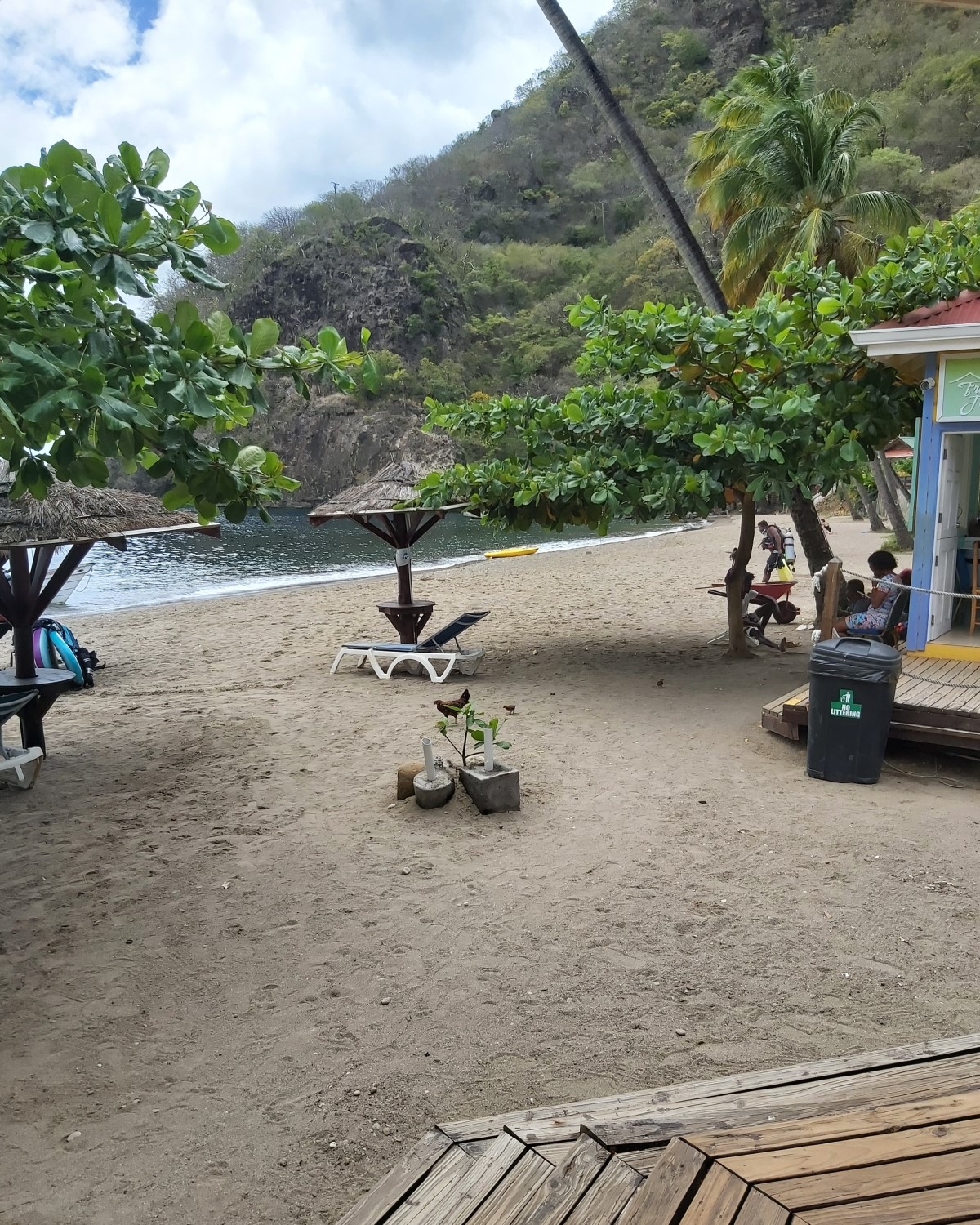 We preferred to chill on the beach with locals, eating their food, drinking the beer from them and saving a 300% markup at the nice areas. You could and we did pay someone $40 to pick us up and drop us off at a luxurious private beach in a neighbouring bay, the snorkeling was excellent. 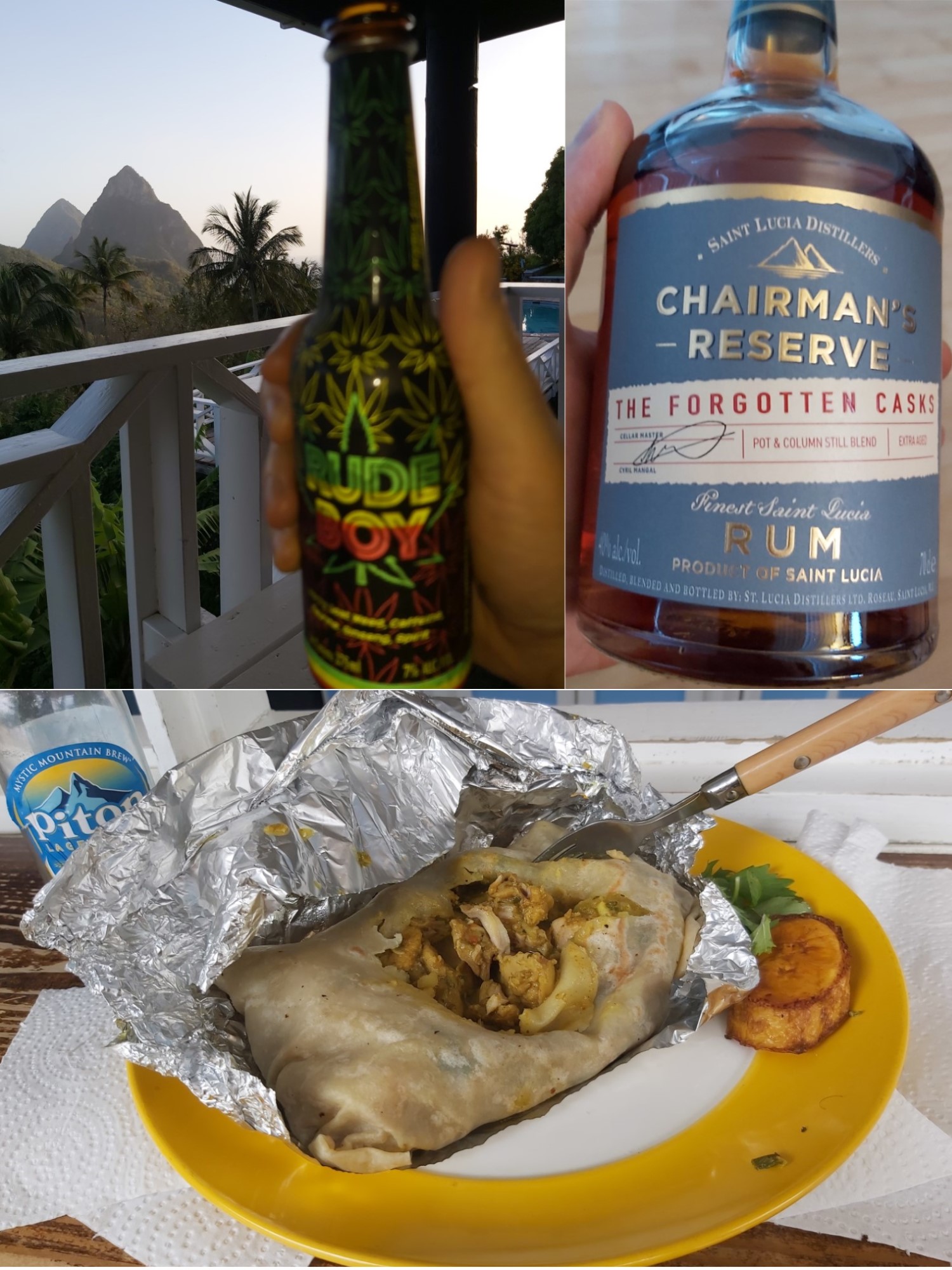 Rude Boy is a Caribbean party staple. The Forgotten Casks Rum exceeded my expectations. The Roti from the beach was far better than the restaurants and the person making it was very accommodating, once we found him we didn't eat lunch anywhere else. 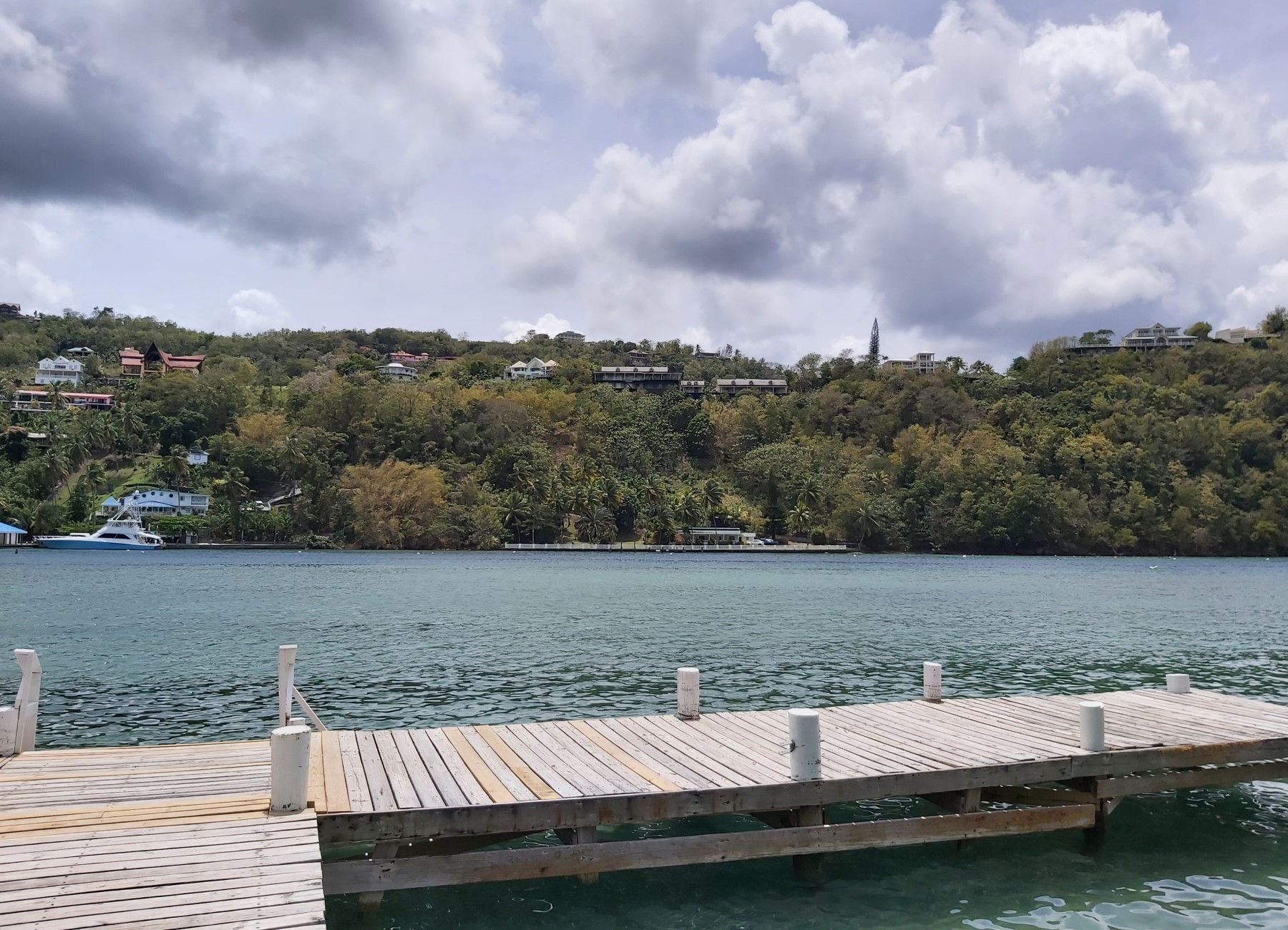 One day we hired a driver, stopped to buy rum at the Rum factory and visited Marigot Bay. Those are exclusive mansions and this was a resort accessible only by ferry. We had a few drinks, ate a small snack and went swimming in the beautiful bay. Don't be fooled by the clouds, they don't last long. 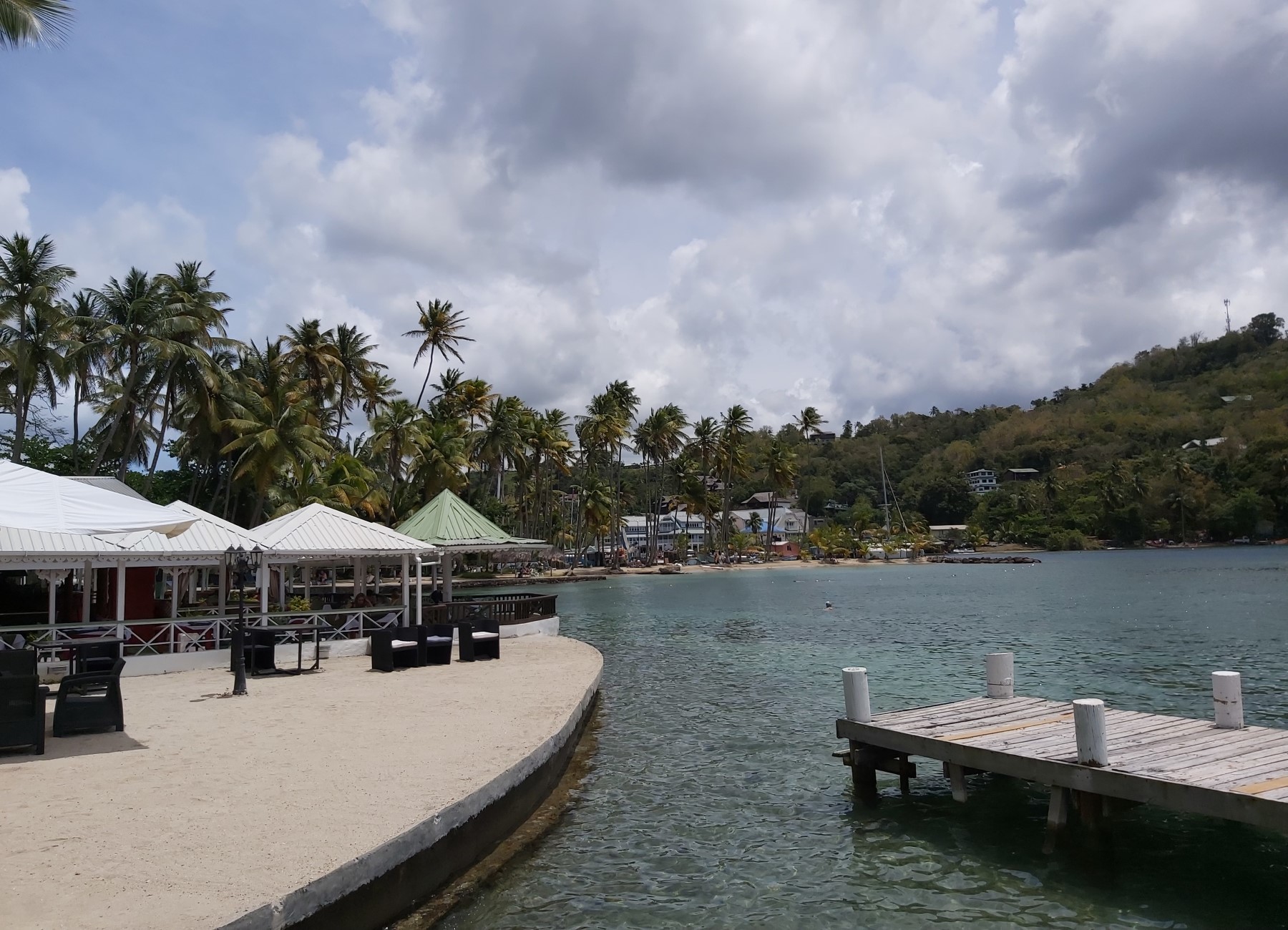 The drinks off the locals on the beach were 1/3 the price and you know the money helps them a lot more in the back ground. We divided our time between Marigot Bay Beach Club and the public beach. The drive from Soufrier to Marigot Bay takes over an hour on winding roads and it's most of the fun. 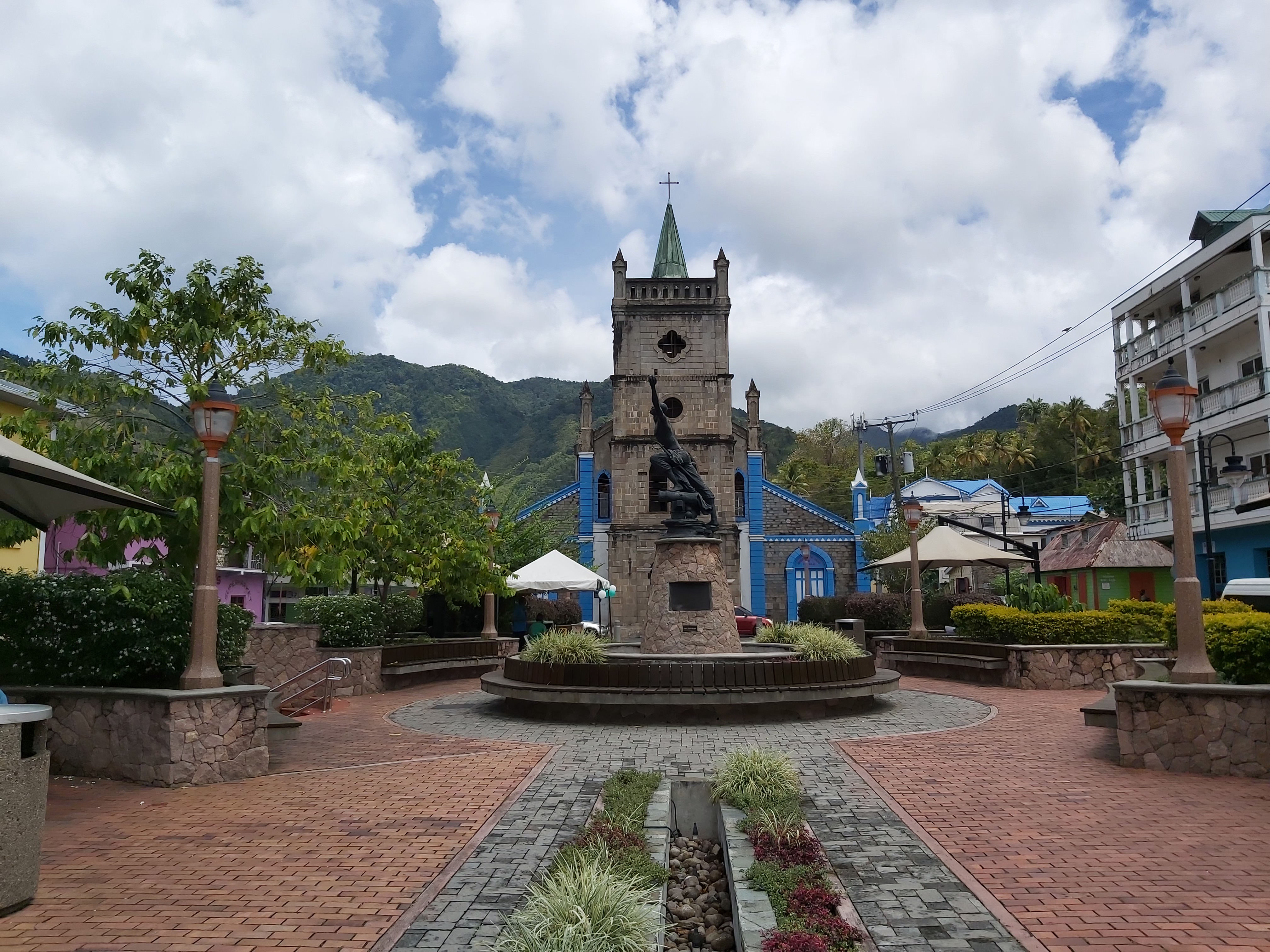 We only visited downtown Soufriere which has one nice area. I'd like to tour more cities and places on the island next time we visit, expecially Rodney bay and the jungle but time was limited and we were there to relax. Besides why go anywhere when you got this view. 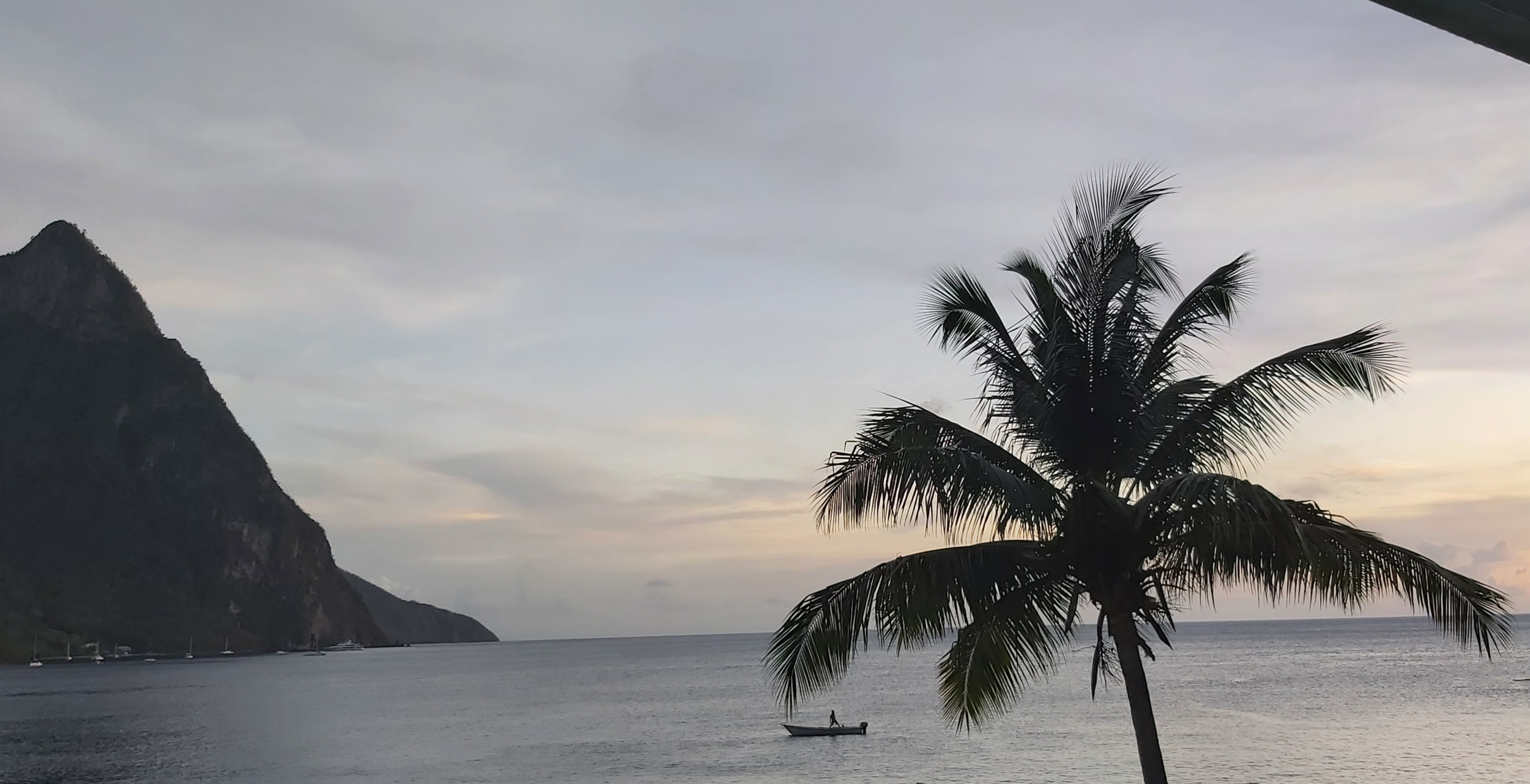 It's actually from an Airbnb on the beach. We split our time and saved a bunch. I love these styles of vacations, pack light, do it yourself and relax. Can't wait to share more of our adventures over the past couple of years with you and no, this was not our Honeymoon.

See my previous St. Lucia Post about Soufrière and the Pitons here