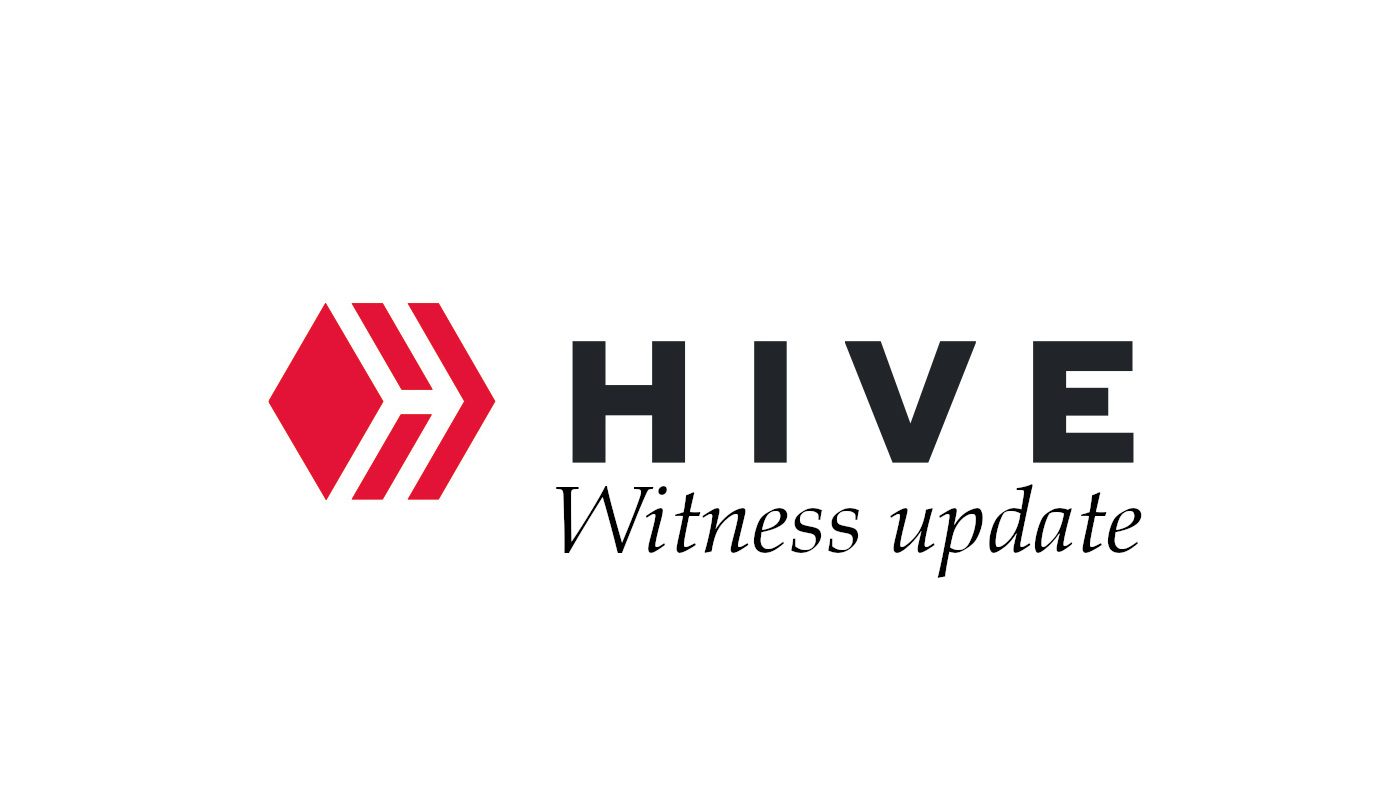 I wrote my witness resignation post, where I described the issues I had, but mainly it was a problem with the low price of STEEM, high server costs, and PayPal banning my account. I also lost my passion for the project, Steemit Inc. was dumping hundreds of thousands of STEEM every month.

While Hive still has some of the original problems, I have much more faith in its success. My personal financial situation has also improved, so now I can afford to run a witness server again, plus recent changes to hived software made it easier to run on cheaper hardware (my server has only 32 GB RAM instead of 64 GB).

I was thinking about starting a witness again since the birth of Hive Blockchain, but I was unsure if I want to go back to the politics game (not many of you know this, since

, but I suffer from social anxiety, so campaigning for votes is not my favourite thing to do). But after a recent Twitter poll, I was encouraged.

^not online 24/7, but can be added fast if the main server goes offline

* I have received compensation for these projects.

The current main goal I would like to achieve are:

Thank you for reading,

P.S. Should I bring Hive Snake back?

Iknow this is old, but it still brings to question:
Your obviously an active witness as your still running a node, but how active in your mindset in HIVE are you? What are your plans now? Any previous goals you achieved?

I'm not really active on the "community side" of Hive (I don't really read/write posts much), but I'm still working on multiple hive-related projects (e.g. LeoFinance Hive-BSC-Polygon bridges).

I don't really have any plans other than to keep maintaining my node. Well, I'm also working on offering a HBD OTC trading service, but I don't have any time estimate yet.

very nice! glad you are back!

I'm voting for you! All my $UNI came from you!

Thank you for everything you do for our HIVE

About time, that Twitter poll was an awesome idea, as you can see people want you.

Well thats a really easy decision to make. Gave you a vote(from hextech, I proxy to there).

Congrats and thanks for all you are doing for HIVE. Voted. 👍

YEA!
Welcome back! Looking forward to seeing your posts and updates.

Welcome back, have a good journey ❤

I was looking for another witness to approve, so you have my vote.

@fbslo,
Wanna remove some & add you with my witness proxy!
!tan

Will get my vote, mate!

Will get my vote, cheers Fbslo!

Hi. I have a lot of questions about inside Hive working.
Could you help me as a witness?

I write posts about Hive. Look my teg #hiveinside.
Thank you.

Send me a message on discord to ask questions (fbslo [Hive witness]#8470).

Thank you. It is good. I'll write questions and send it to you?

I live in Slovakia. Slovenia is not far from us ))

Voted for your witness! I’m not sure what Hive Snake is exactly, but I say yes! Bring it back! And tell me more about it.

It was a classic "Snake" game that rewarded users with upvotes based on the result. It got quite popular (over 2k scores rewarded), but I had to shut it down due to abuse.

I'll be redoing my votes after the HF and will definitely vote for you. Thanks for all the work on hive!

You have my support!

I'm new in the platform, but you have my complety support. You have my vote!

Great to have another witness. Good luck with it.

Welcome back as a witness :)

Hey @fbslo, here is a little bit of BEER from @steevc for you. Enjoy it!

Hey @fbslo, here is a little bit of BEER from @amico for you. Enjoy it!

Welcome back, you made a great decision now. We hope for a great success of Hive blockchain

Bravo, @fbslo ! Of course bring the snake back, please. Here it can be call Hiveconda ;)

Great to see it.

P.S. Should I bring Hive Snake back?

Also, of course you should.