Hiya guys, So many things have started to take off on the plot it is crazy, So I thought that I would give you a little tour to show what is going off on the plot.

Like every day I have certain things that need doing, my wife and I always make a little list of what needs to be done.

I am learning as I am going along as I have made some mistakes that I will learn from for next year.

One of the biggest mistakes I made this year was planting my sunflowers and pumpkin plants together. 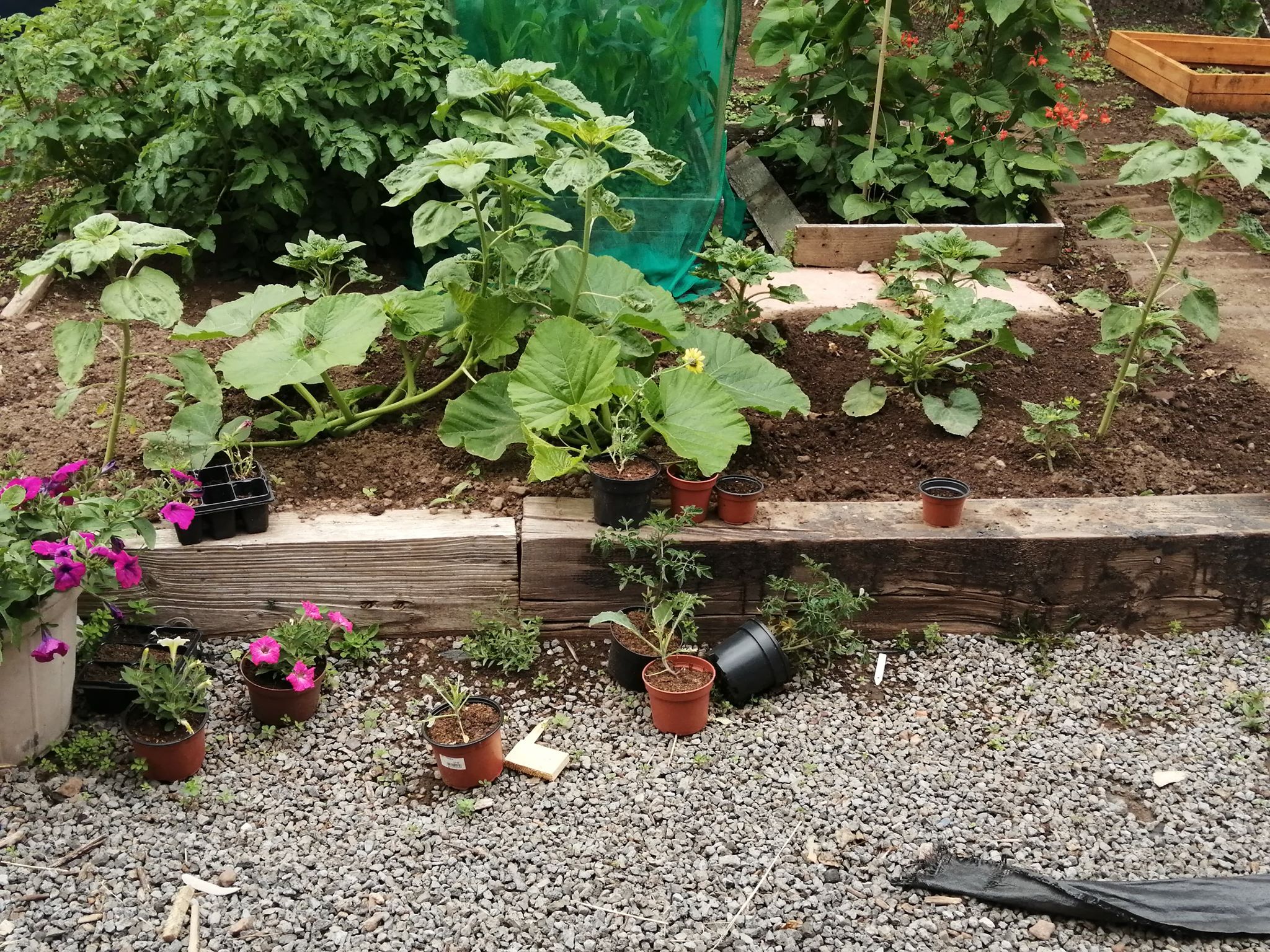 At the time I planted my pumpkins I thought that it would be a nice idea to add my sunflowers to the same area, but this has turned out to be a bit of a problem as the pumpkins are trying to climb up the sunflowers.

Plus both the pumpkins and the sunflowers are heavy eaters and are competing all the time, I have noticed a size difference in my sunflowers as they seem to be very small and weak, even though they are trying to flower. 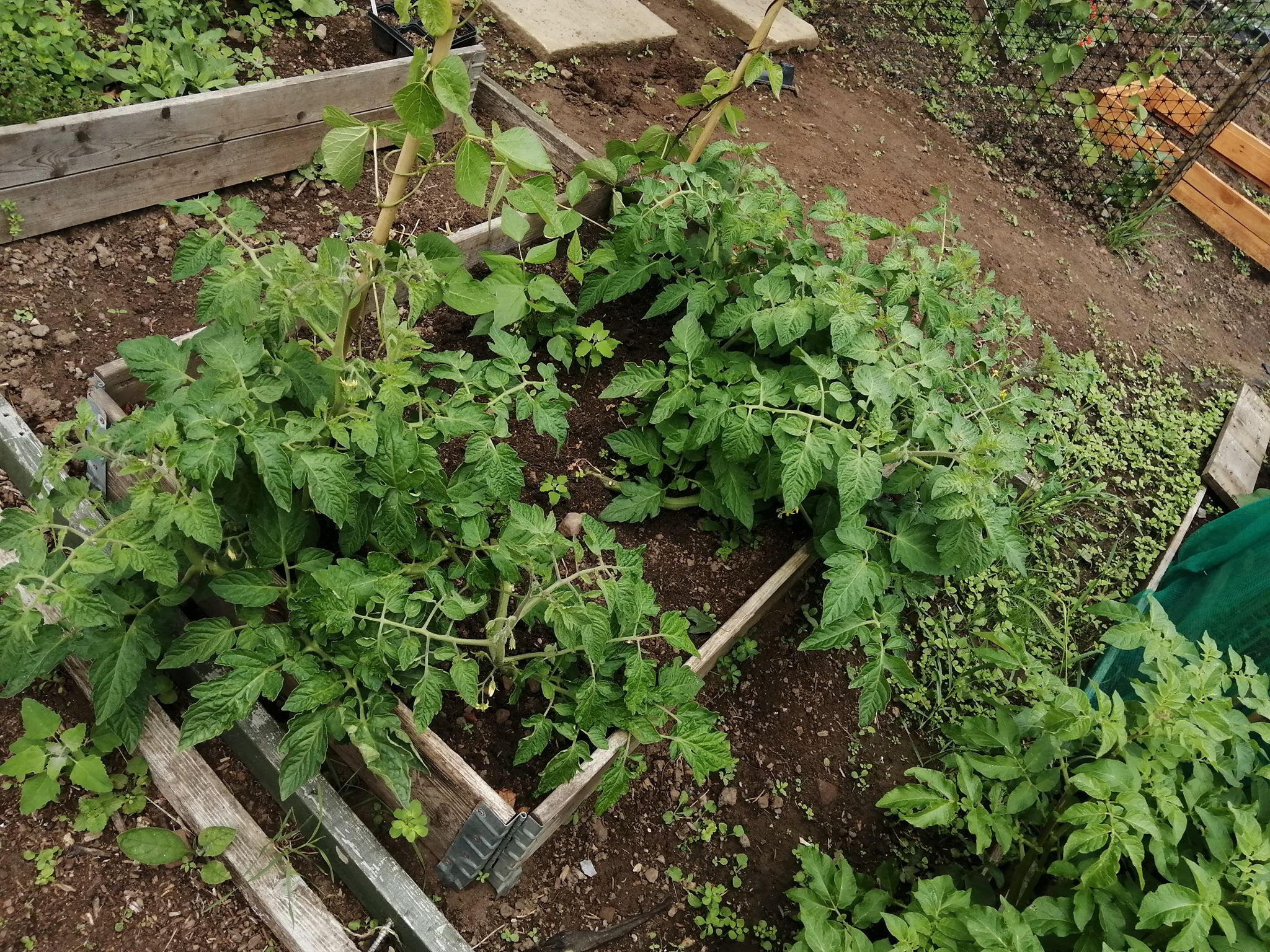 Number two mistake was pruning the tomatoes plants as they have bushed out and all over.
I should have staked them too, but the stake I made fell and I haven't put it back up, this is a job that needs to be done soon as they are really out of control. 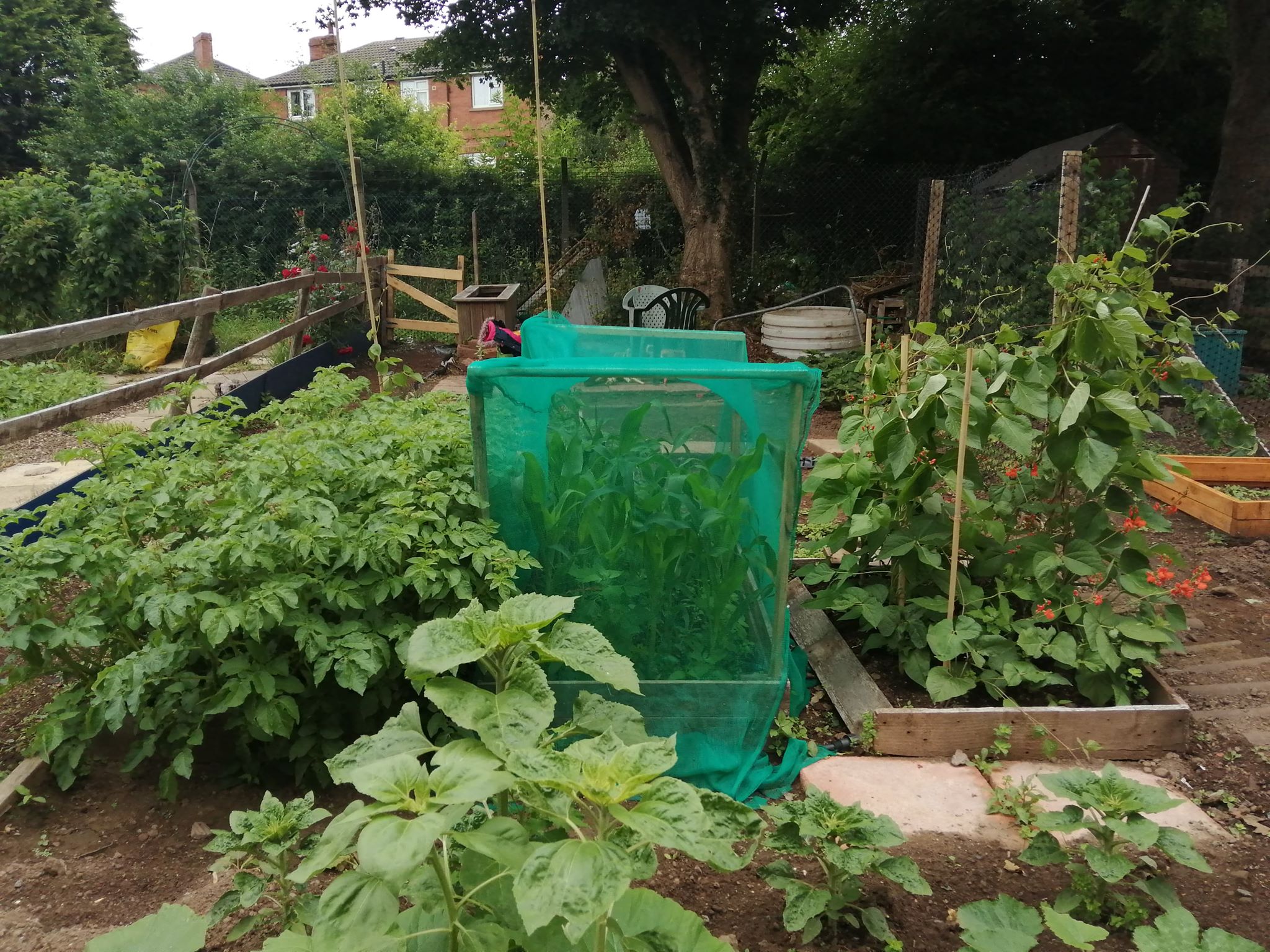 Mistake number 3. I only bought small canes for my beans, and they have climbed up to the top of the canes and are now holding on to each other for dear life, I have to buy some more canes and make sure that they are high enough for the beans to climb. 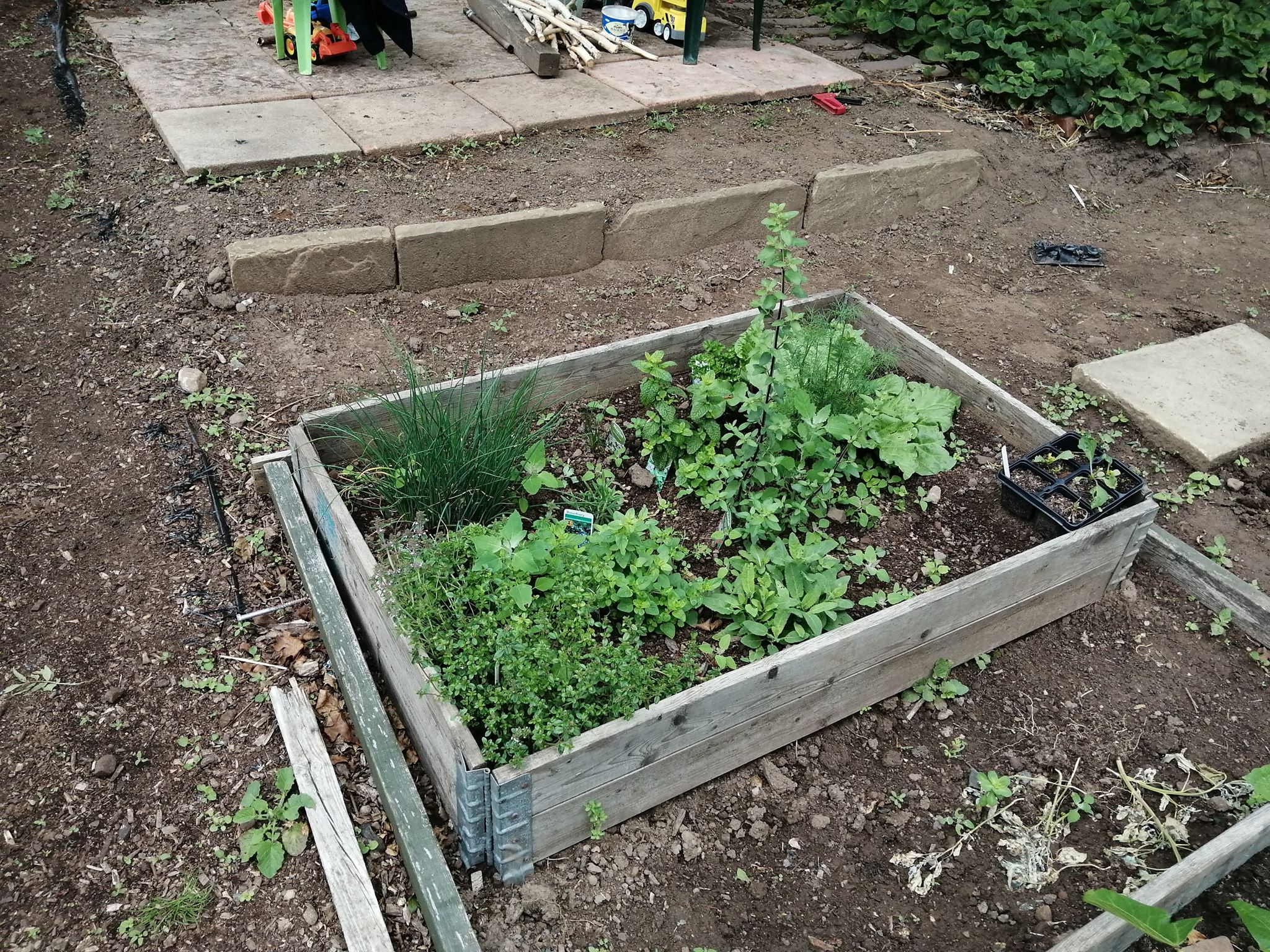 Mistake 4. herb garden.
well the herb garden wasn't a mistake, but I did plant my herb garden on a patch were rhubarb was growing and since then it is all ways trying to grow through.
I have tried to keep it at bay, but it seems to be a plant that is like a weed and will never stop growing. 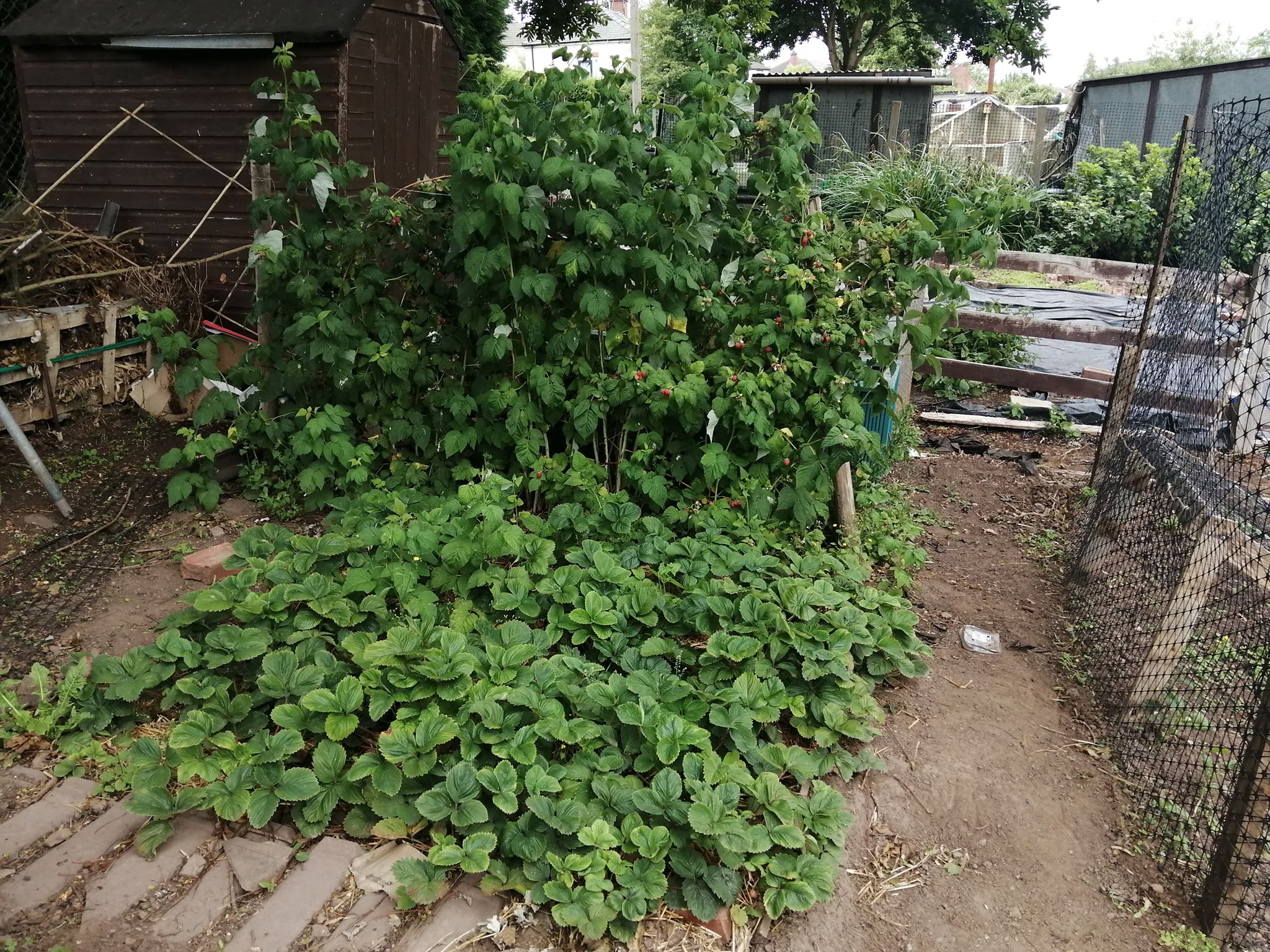 Now the above photo is my favorite place on the plot, it is my raspberry and strawberry patch, but I made an error at the beginning of the season by not caging the fruit.

I have lost every strawberry due to squirrels, I even caught one eating a strawberry when I turned up one day, I was so unimpressed.
The raspberries, however, are doing great, I have never had so many raspberries before, and they just keep growing. 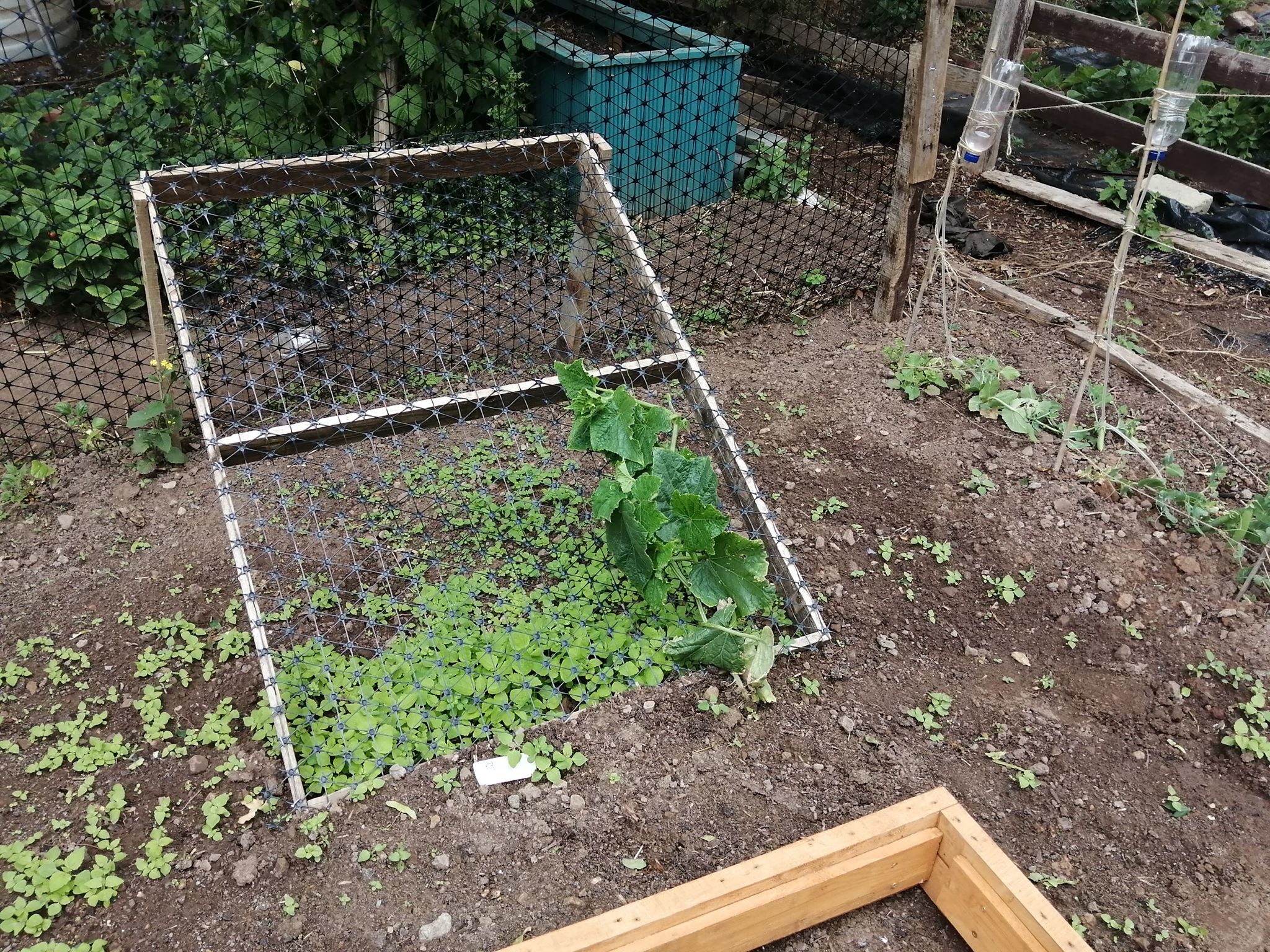 Cucumber plants don't seem to like me, as this is my 4th I have tried to grow, everyone seems to be eaten by something and I am running out of time.
I have thought to my self that I could next year grow them in the hoop house or the greenhouse maybe.
I think this would give them a better chance.

Weeds seem to like my plot, every time we go down we spend more time weeding than anything else.

The problem we have is the plot next to ours hasn't been tended in a year or two, and the weeds there keep blowing their seeds on to our side.

It drives me nuts as there are other things that I could be doing other than being on my hands and knees pulling weeds.

I have thought about adding a mulch or something to keep them coming through.

next year will be different as I have a better plan now I know how my plot has been working so far.

It is all fun and games. until next time

Everything looks good and healthy though!
Next year you will know better :)

You can also plant beans that don't need stakes.

Everything is coming along, I just have a better idea in my head in what it should look like, thinking of spending some money and getting it to a point where I can call it my plot
When I took the plot over someone else had placed where everything was going to go, and I don't like the layout, I am wanting to move the summerhouse to the top of the plot to make it a bigger space for us to grow on.

Whoever put the summer house where it needs their head looking at, I can't understand why it would be halfway down the plot, it takes so much room, when the top of the plot is dry and gets little to no water, it would be better if it went there and then it opens up so much space.

Lots of work ahead of you then. But it always pays off :)

Nice garden. It really is a soul cleansing hobby. Keep it up my friend!

Thanks a lot there is still loads to do, but getting there slowly :D

Mistakes are the best, especially if you can learn from others! 😉 Thanks for sharing yours; I’ve featured your post in The Lotus Garden newsletter, which will be published tomorrow.

I was talking to another guy today who showed me how to look after my tomatoes better, he told me after having his plot for 15 years he is still learning. I guess we do need to make mistakes :D
thanks for adding mine to your lotus garden newsletter :D

Even if there were mistakes, we live and learn. Try mulch for sure

Your right, I have bigger plans, i am just waiting till the end of the season before I start them, I can see it killing me trying to put the things in place.
I love mulch, I put it on gardens that I landscape, I should really use it at home :D