Learning how to service my scooter (moped)

My old Honda Odyssey were deemed not road worthy anymore due to some heavy rust on the inside. After several months using only one car, I decided it's time for me to buy a motorcycle so I can still go around when my wife is using the car to go to work. I decided to buy a scooter instead of a real motorcycle because I'd be mainly doing city trips so I bought a used 2008 Kymco People S 200: 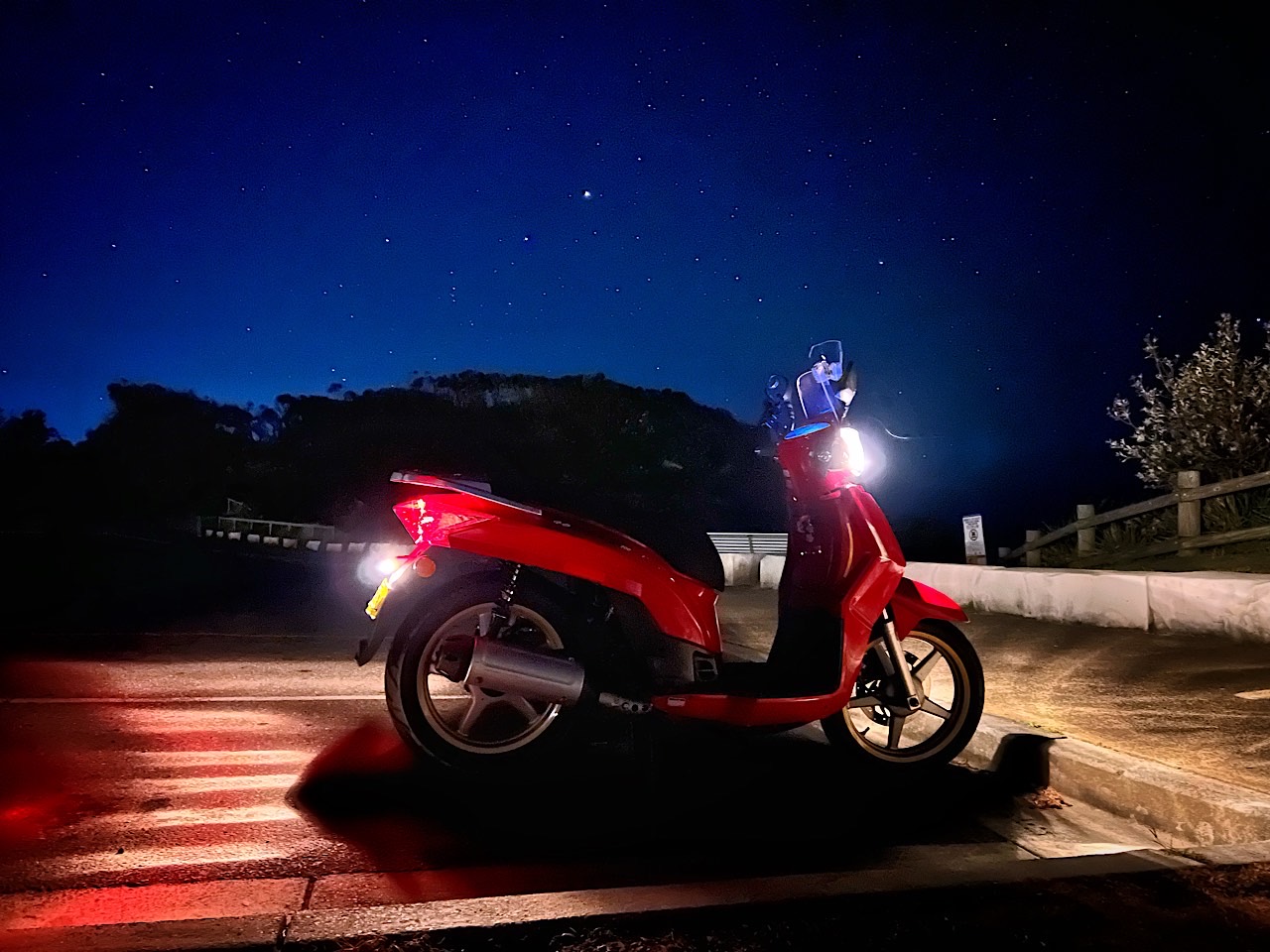 After a couple of weeks getting used to it, I started to do longer rides (about 45 minutes each way) and noticed my lower back was hurting quite a bit the following day. So I started searching the Internet for some times and tried all tips I could:

Nothing really helped. I then noticed that the rear suspensions were not very smooth, pushing down the scooter's tail would not move the suspensions that much. So I took the scooter to get it serviced but the mechanic told me he could not find any fault with the rear suspensions, they are safe it's just a bit uncomfortable... But I'm decided to get them changed, however I could not find any replacement parts in Australia so I bought a pair of suitable YSS rear shocks from Italy and received them in a couple of weeks. That was my first step into learning how to service my bike.

I suspected it would be a little bit of a challenge and I was not deceived, it took me 3 hours to figure out how to reach the bolts that hold the suspensions in place. Removing the fairings on the Kymco was the main issue and lacking the correct tool was the other. 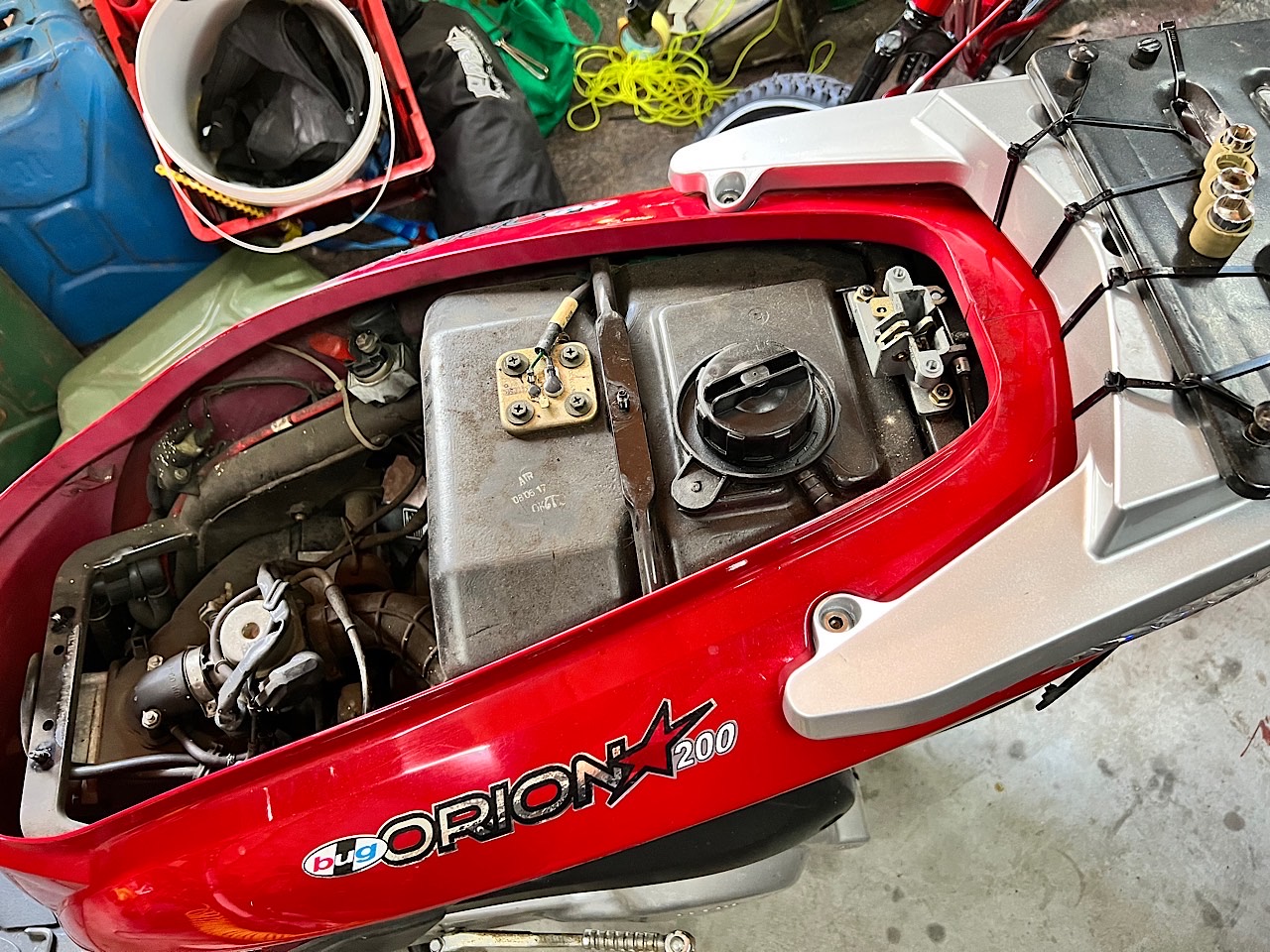 But with patience and persistence, I managed to remove the stock suspensions. Being from 2008, they were really sticky and hard to press down. No wonder my lower back received all the vibrations from the road I was riding on. 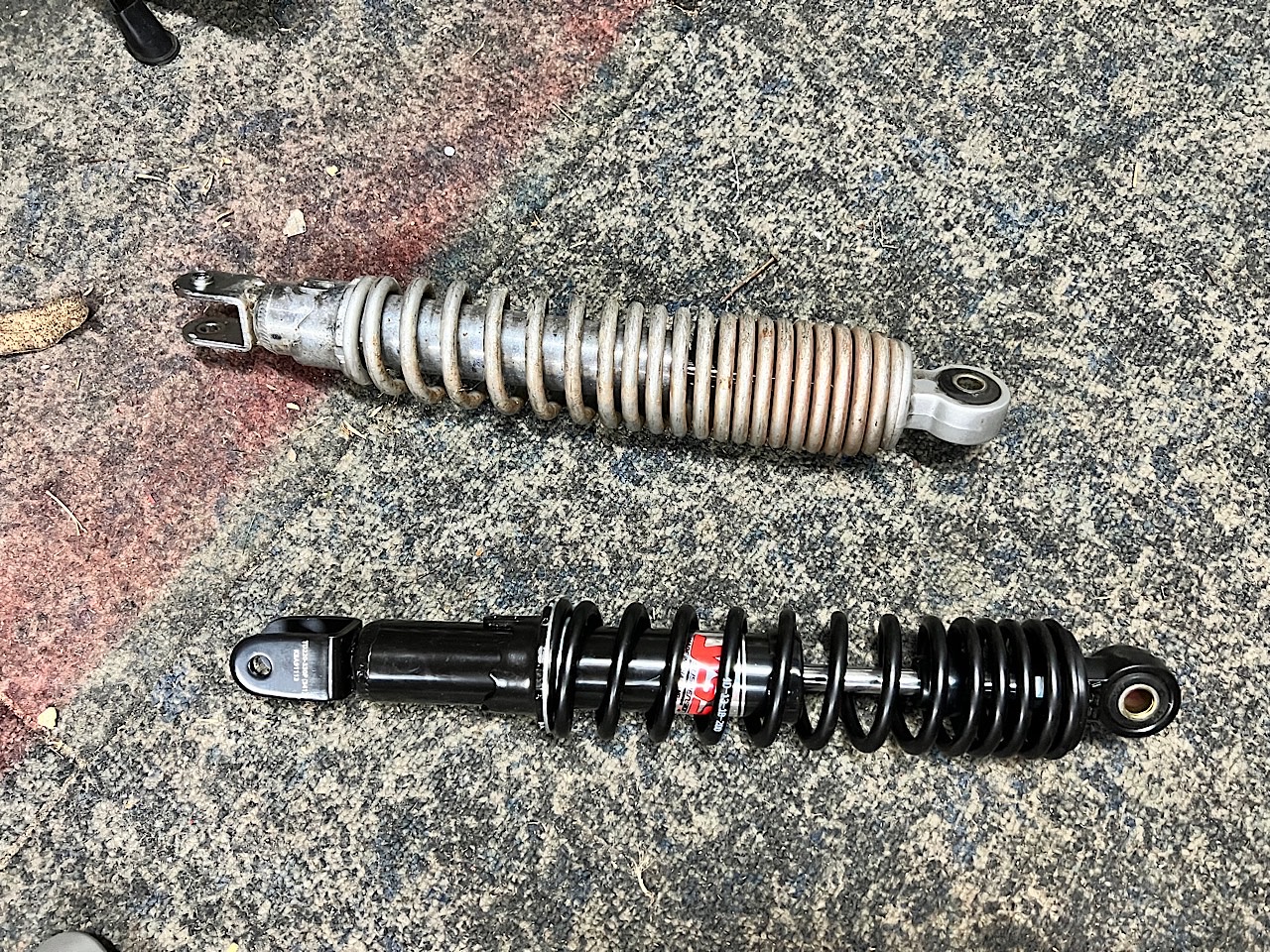 Putting everything back together was an easy process and soon enough, I had two YSS rear suspensions installed: 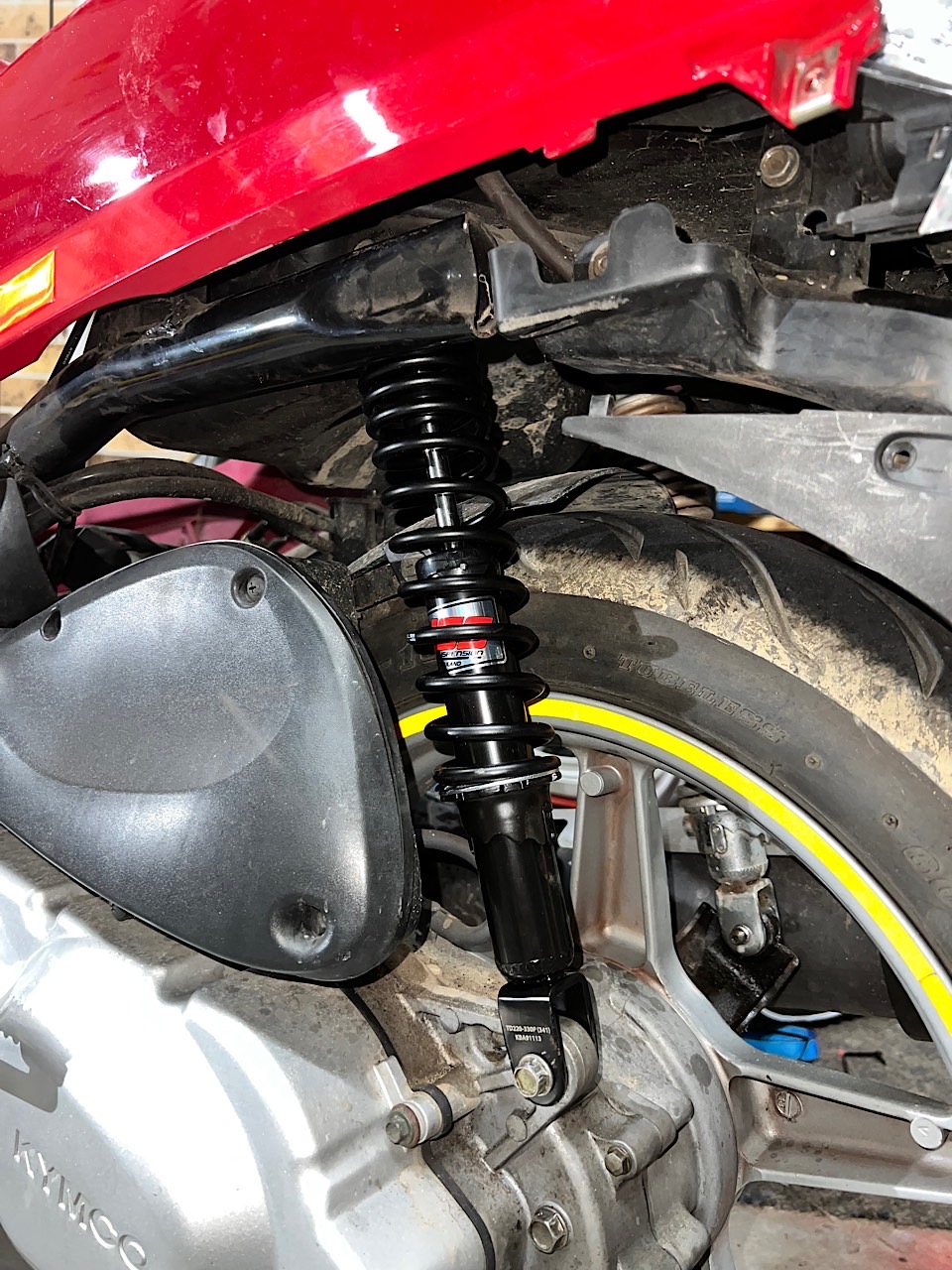 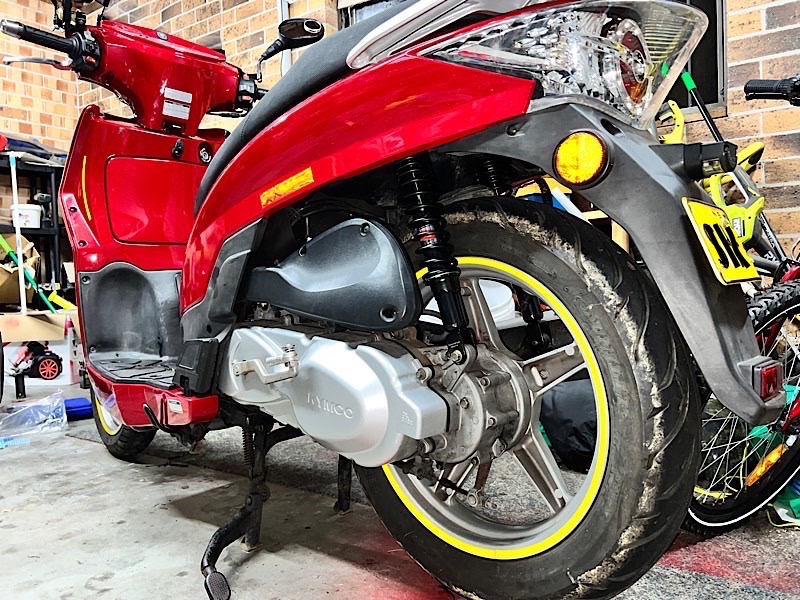 I was thinking of also changing the front suspensions but then read that unlike the rear one, I can change the oil of the front one and that might be enough. Having picked up a bit of confidence thanks to the previous work, I took my courage and started disassembling the front parts. 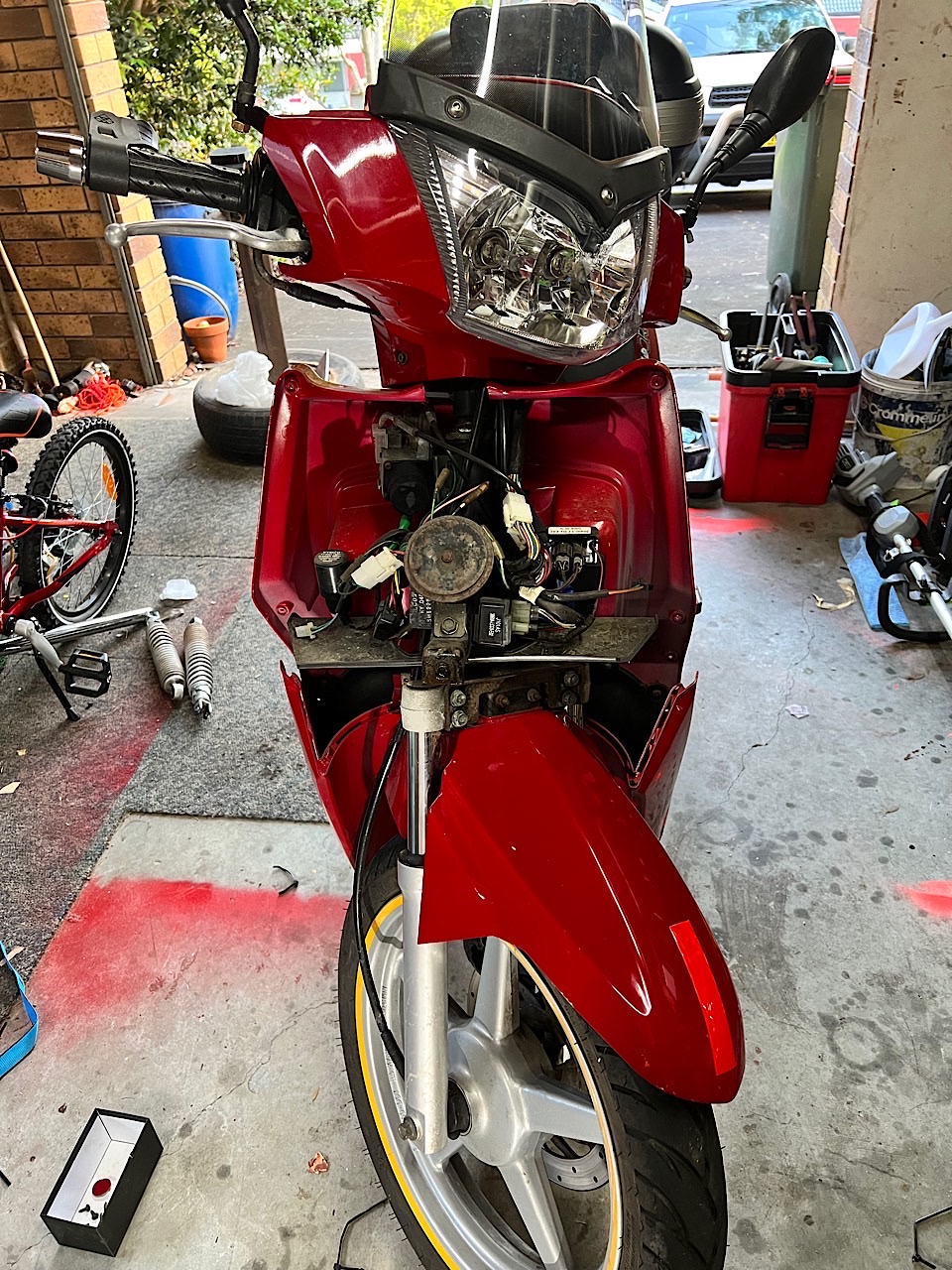 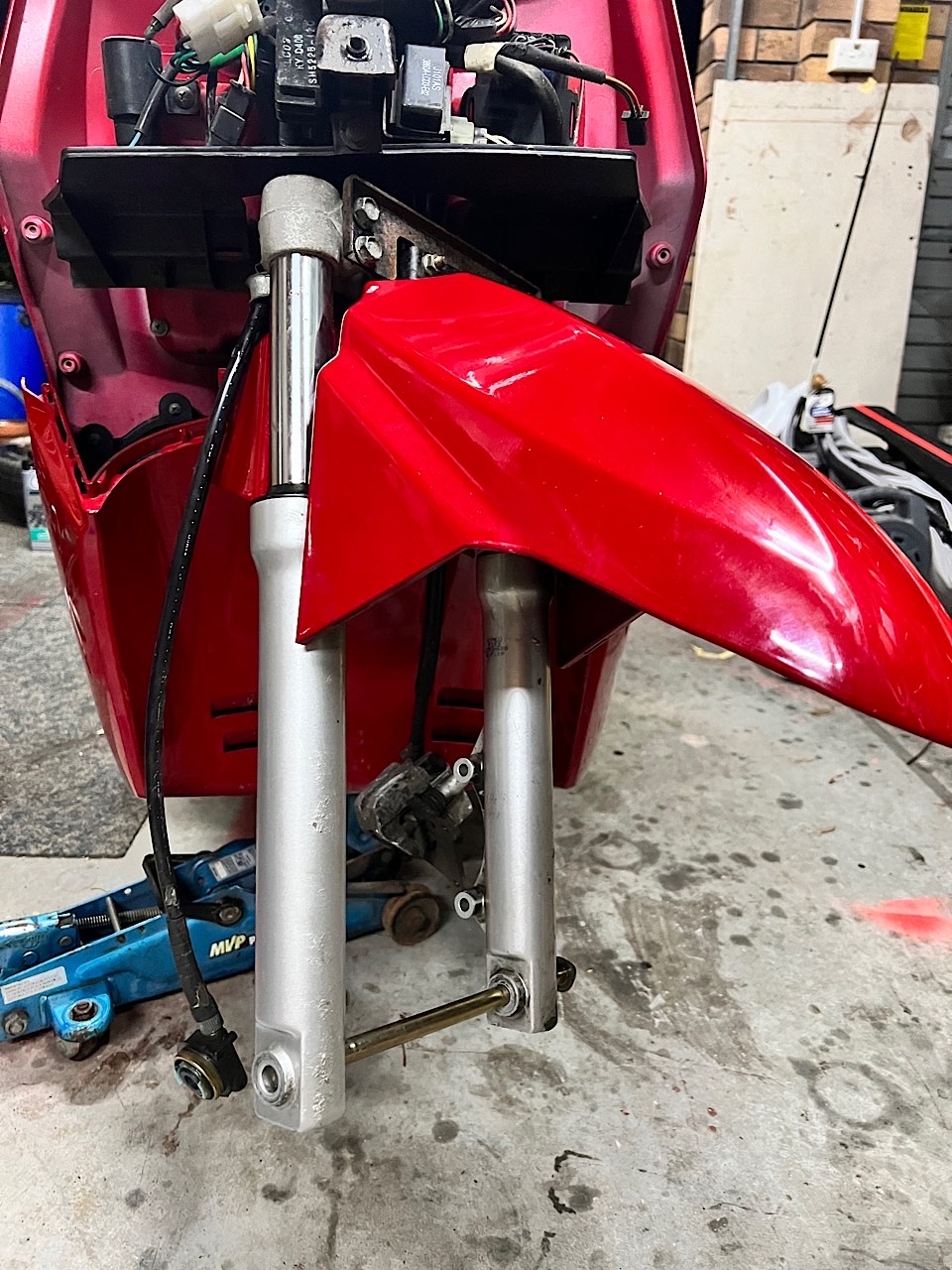 With the previous gained experience, removing the front suspensions was not too bad. All parts were looking pretty good, the fork oil was just quite dirty, not surprising for their age. So I went ahead and replaced the oil with new 10WT oil and started putting all back together. That's when my front brake stopped working... 😱 the brake first won't let go of the disc then they won't brake at all. Panic started...

After checking few forums and chatting with my rider friend, I started investigating the front braking system. That bit was quite challenging. I could not remove the plastic cover completely but enough to reach the master cylinder (box that holds the brake fluid) and to my horror this is what I saw: 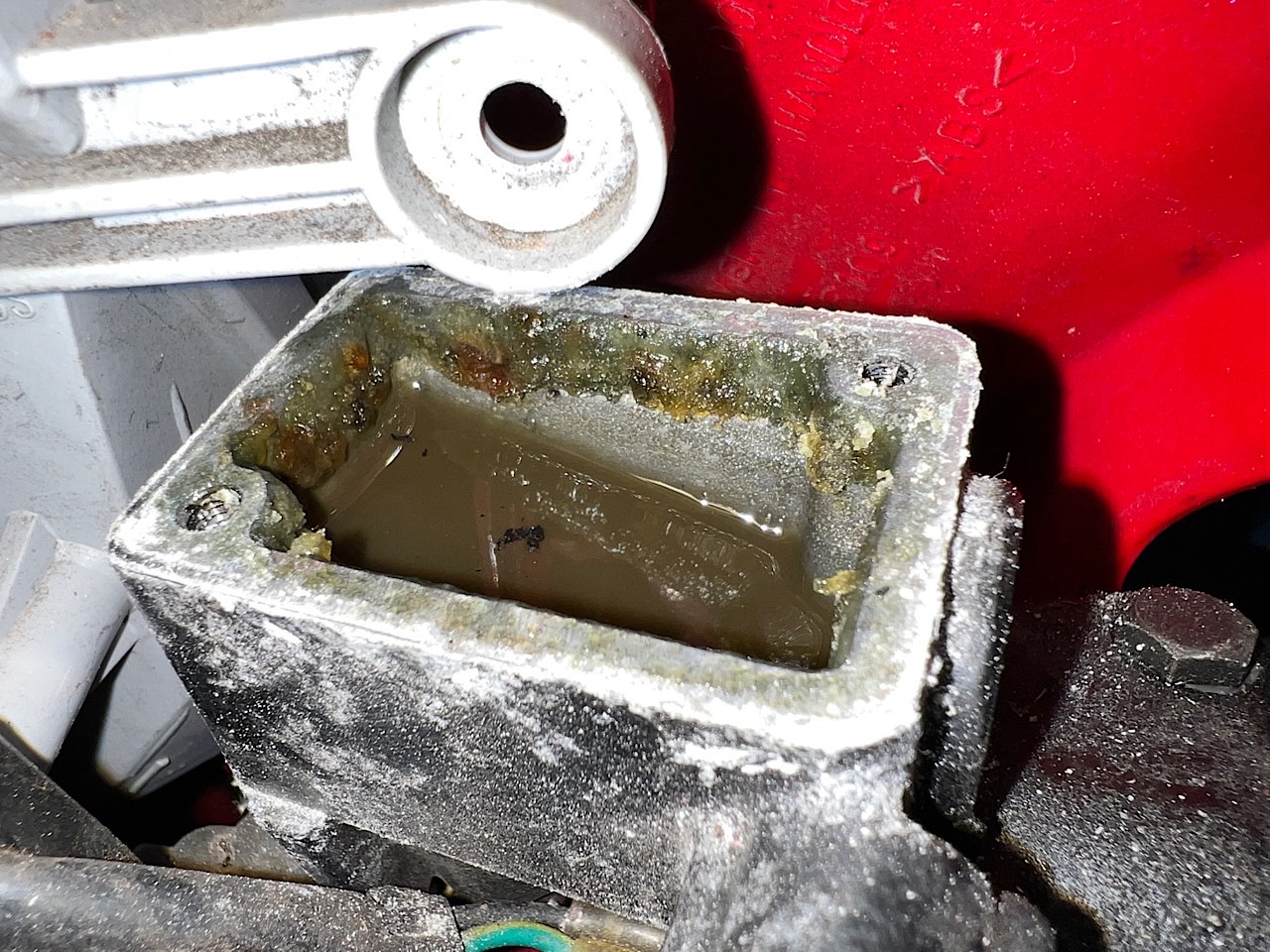 The previous owners must have never done any service to this area of the scooter. Lucky my brakes didn't ceased working while I was riding. At this point, I was a bit depressed, not sure what I should do next. My friend gave me some tips and I started cleaning up the master cylinder and make sure all the dirt and grime was completely removed. I used most of the new DOT 4 brake fluid I bought to bleed / purge the system with some DIY equipment.

See how dirty the fluid was, that's appalling. 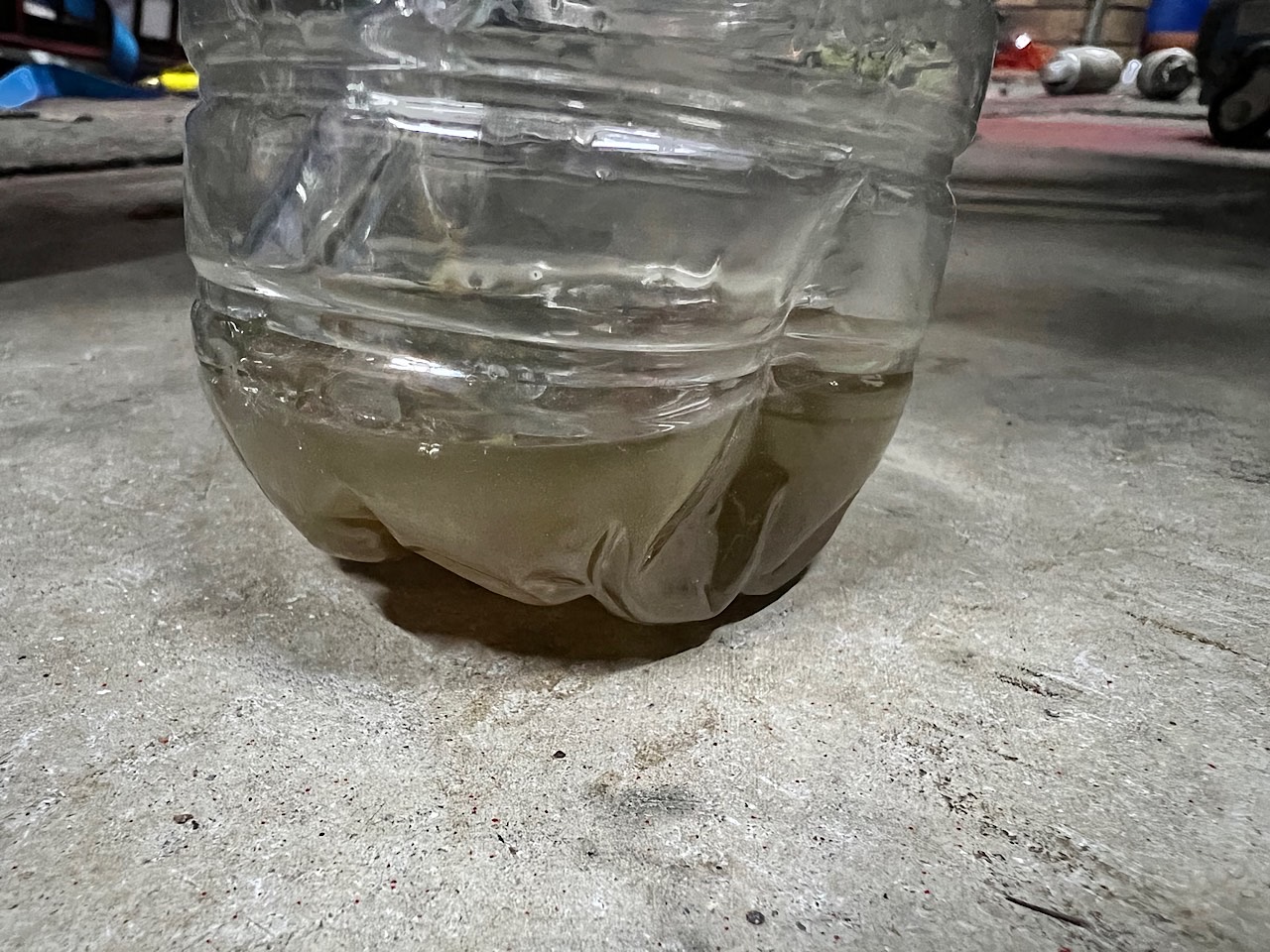 When the fluid came out clean, I continued purging for about 5 full master cylinder. 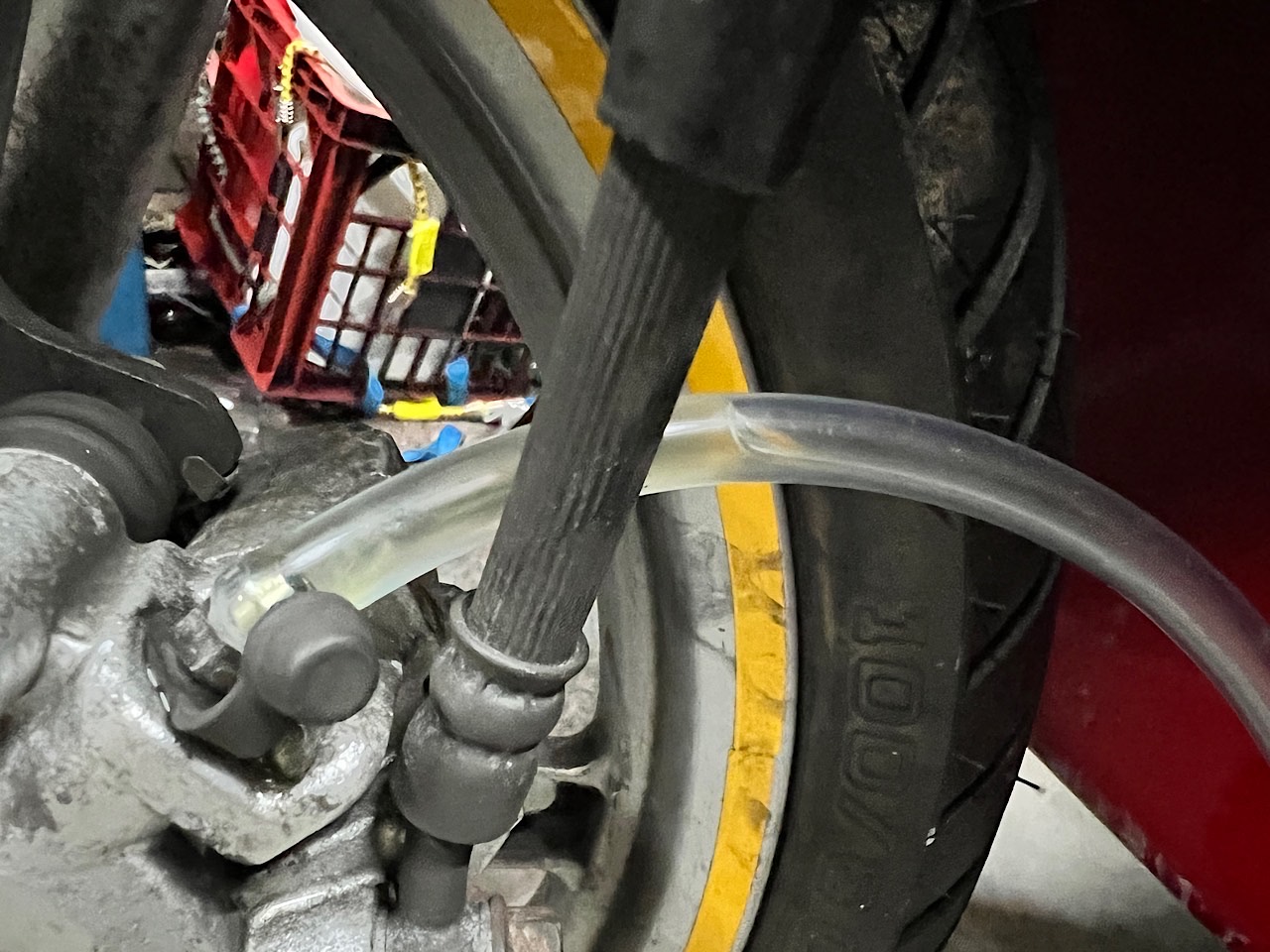 Yoohooo! The front brakes are now working again! I was really glad I took this challenge, I would not have discovered the issue with the brakes otherwise. The rear brakes are drum brakes so they don't use brake fluid, I don't need to do anything.

My next task would be to change the rear gear oil and the scooter would be in good shape again.

For extra comfort, I took the idea from the Scooter Adventures group on Facebook and bought this seat bag and converted it to a back rest. I made a wooden frame as a reinforcement so I can put my weight on the bag without crushing it. 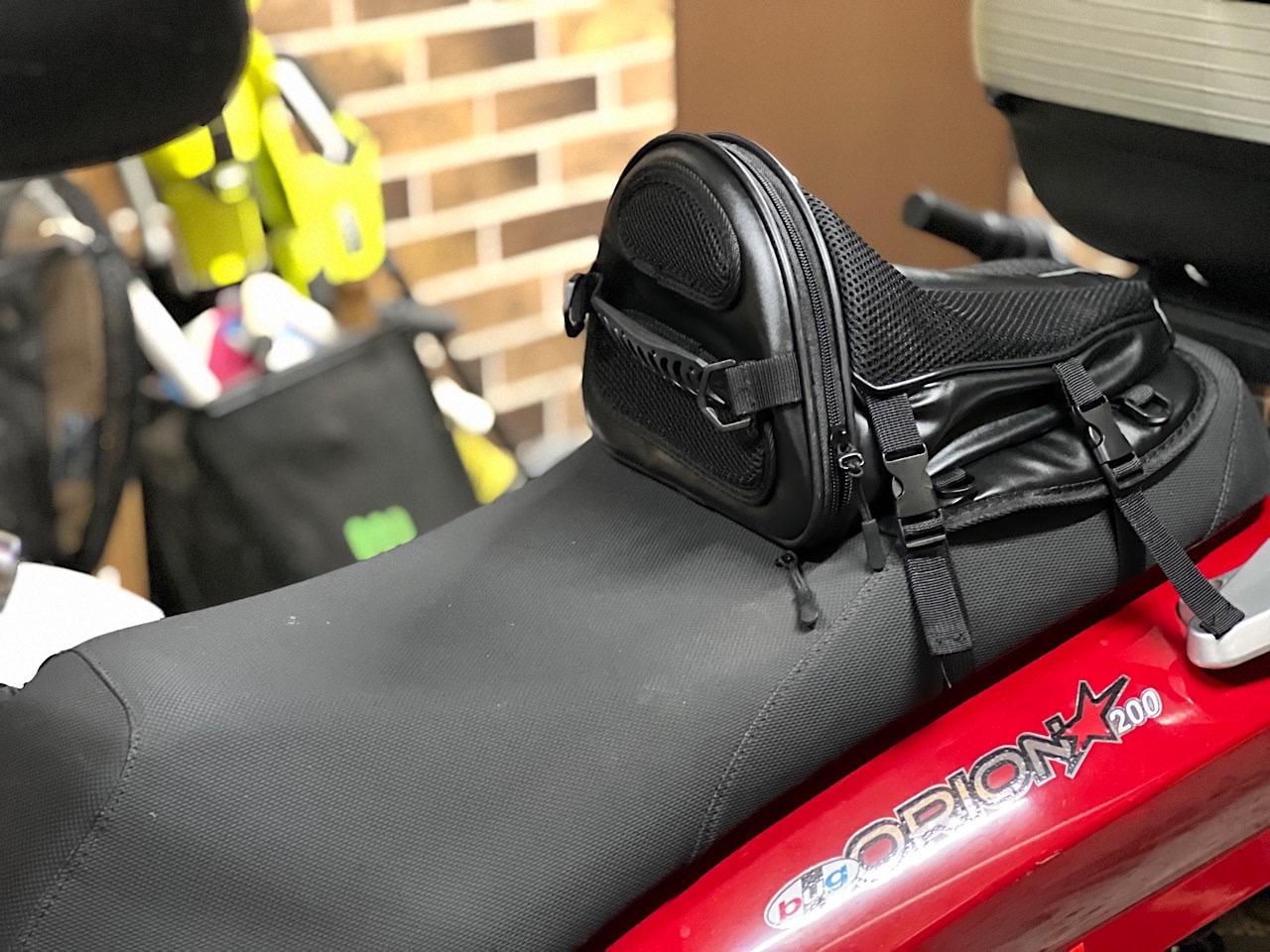 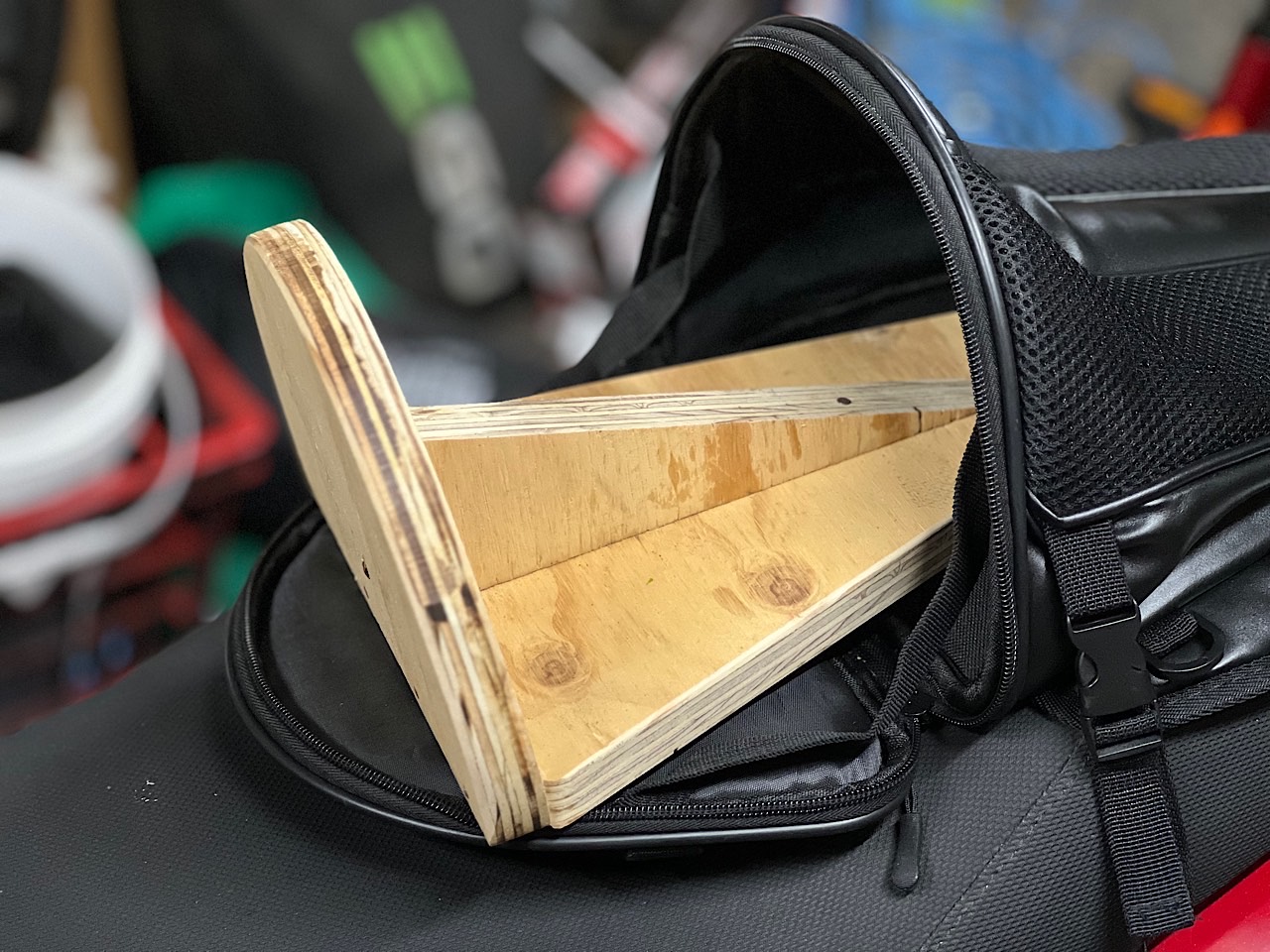 So far so good, everything combined made my rides now much more comfortable than before. The work on the suspensions made a big difference in the ride quality. I'm really glad I did all this work.

Hmmm, well you did something most people would surely avoid doing them selves. I have to say I am somewhat proud of you 😎😎

So just looking at the shocks, the new ones actually looks like it got more spring to them I'd say it definitely made some difference (Huge actually) didn't it?

The brakes, yeah that looks real nasty, REAL nasty. I'm wondering did you struggle a bit to get it bled? Just curious? I had a Honda XR150 and I had a real hard time bleeding the front brakes on that one. And I myself work in a work shop as a technician. So you can imagine.

A tip with riding bikes.

Keep in mind I am not saying you don't know how to drive. I just share this im general with everyone I know climbing on those two wheelers.
If you know you know. If you don't well you learnt something that could potentially save you.

Keep at it broh. Still keen on seeing some Blacksmithing stuff 😁😅

Hey thanks for the nice words.
I had to choose between getting rid of the scooter for something else cuz it was killing my back or fix it. Since the mechanic wasn’t too keen on doing work on this bike cuz they are not doing job on Kymco usually, I chose to do it myself.

The new shocks definitely made a big difference. With the old ones I could feel all the road imperfections but the new ones smoothen all the small ones which removed most of the continuous vibrations.

Bleeding the brakes wasn’t too hard actually. I just took a piece of tubing and put one end on the brake the other in a bottle and pumped the brake lever. At the beginning it was a bit stiff, probably cuz of the dirty fluid. Then it was smooth.

Thanks for the video. I watched a lot of riding tips videos 😄

Wow! So cool, you did your own diy which is good at least it saved you some money plus you get to really know your motorbike very well.
If ever you will go on long rides try wearing a back support clothing or girdles will also help a lot for your posture while driving.
I wear that too when me and hubby would go on our bike road trips on separate motorbikes. I had that feeling too when we did our first road trip, two hours one way.
So after that experience I researched and found some back support clothing.

Enjoy the ride and be safe!

Yes I do wear a back support now, it's helping a lot indeed.

That liquid was so dirty you could pour flour into it and make a mix out of it, my god how it got so bad? How does that piece accumulate that amount of dirt?

I believe this part of the scooter has not been serviced since 2008... The brake fluid is hygroscopic so it will absorb all moisture and this could lead to formation of scale etc...

Well since 2008 is one heck of a time, incredible that you could actually salvage it from 14 years of neglect actually, big hug thanks for answering my dumb questions xD

Issues with back could also be because you're not used to riding regularly. i highly recommend doing some yoga to help with this.

Some free Hive-engine tokens for you:
!PGM !PIZZA !LOL


I was told that Microwaves were invisible
But I can see mine on my counter.
Credit: reddit
@quochuy, I sent you an $LOLZ on behalf of @atma.love

Yes quite possible too. It’s getting better now.

Wow... You're doing a little extreme work,,, if we're playing with brake fluid.
But you did a great job.

I didn't expect to get to that and I was going to give up and bring it to the garage but I'm glad I did it, wasn't that bad.

I am not much into motorcycles, but the starry sky on the first photo is catched my attention. A good choice for the cover photo.

Excellent post, well planted and very useful... The wooden made back support reinforcement is a great idea!!!...

That brake fluid is scary, should be changed every 2 years, nice work fixing up the scooter.

Yep. I might change it earlier just to make sure all the dirt from this time is totally purged

Excellent acquisition dear friend @quochuy
It's good that you were able to do all the repairs, surprising how the brake fluid was, what a danger
Very good work

You proved that is we want we can learn anything

Mostly important for me because i have ascooter.

remarkable. you have written very well on that.

Hey, since you don't seem to follow tags, how about you stop autovoting all this dtube shit?
https://peakd.com/hive-196037/@rongibsonchannel/hxdz8lzcnir

Thanks for letting me know. Will check it out

I also have scooter ..but i dont know how to service my scooter ..🤗

Congratulations @quochuy! You have completed the following achievement on the Hive blockchain And have been rewarded with New badge(s)

Wow its red! I love red and you’ve a red honda that looks so beautiful for It's red color. Thanks for sharing this with us.

I chose red for visibility.