STOP THE BUS! Discrimination and segregation are still wrong!

drutter (72)in Informationwar • 8 months ago

For whatever reason it is done, discriminating against minority groups and splitting up society is always wrong. We finally stopped seating "colored" people at the back of the bus (thanks to civil disobedience by people like Rosa Parks), and social justice has advanced greatly in recent decades. But now, discrimination and segregation are being brought back by government health officials and the mainstream media. This time, the minority group is people who have chosen not to be injected with an experimental spike protein generator, and carry a digital government ID to confirm their injection status. Any human who will not carry the "passport" or will not accept the injections, is labelled "unvaxxed" or "antivax" and denied participation in a growing segment of society! 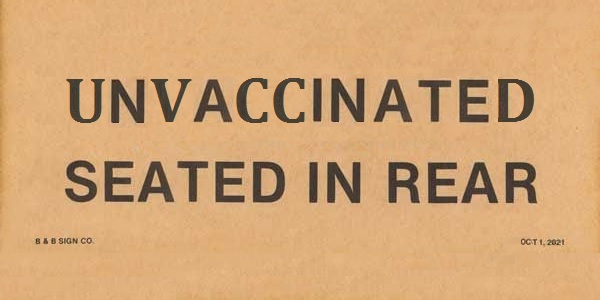 Actually, in more and more places, people who can't prove they're recently topped up with the latest spike protein generator aren't allowed on the bus at all!

I've always been proud that Canada helped lead the way out of systemic discrimination and segregation, like sexism and racism. I was around for the 80s and 90s as the tide was really turning, and saw most forms completely vanish from Canadian/Western society in the early 2000s. The internet really helped.

But now, thanks to manufactured crises and division, we're right back at it.

Just one of countless comments like it, made on mainstream media articles, and endorsed by their staff.

You'll be censored (or even banned) if you even mention the truth:

But you can say "let unvaxxed people die from Covid because it's their own fault", or "I don't want my children around those disgusting antivaxxers", winning the acceptance of other commenters, and site staff. 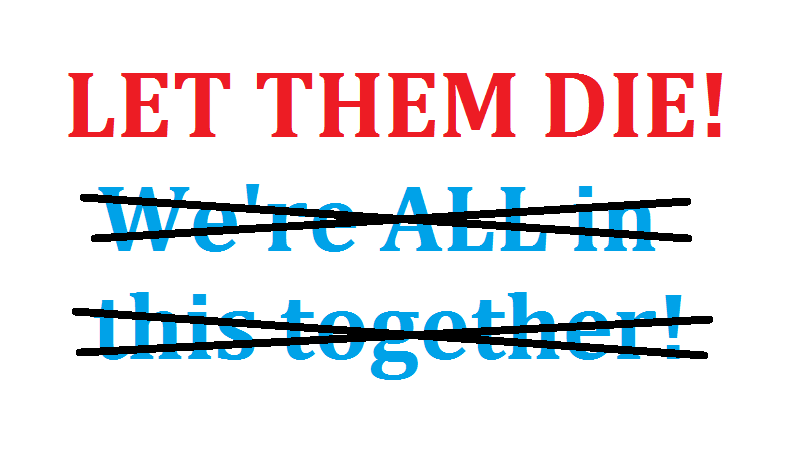 The media is SO biased in favour of big pharma's agenda - which makes sense because they are literally owned by big pharma - that one side is punished for gently sharing their opinion, while the other is praised for advocating a dangerous backslide into discrimination and segregation.

My stance is that we should recognize this divisive tactic, and counter it, by uniting! Against them!

Civil disobedience is the peaceful public breaking of unjust laws. It defeated segregation before, and it can do it again.

Do not comply with evil.

Indeed there are many layers to the Covid agenda, and division ranks very high, as it makes nefarious agendas like depopulation a little easier if everyone's fighting over the fine details instead of recognizing the real enemy.

It's out of control now.

Today I was in the grocery store, about 50% of people wear masks. No checks for Covid ID at the stores here yet, thankfully..

I saw a scene that left me and everyone in the store standing slack-jawed (assuming the 50% masked up were also slack-jawed...)

A masked up white lady and unmasked colored man screaming at each other in check out for literally 10 minutes. No one even said anything, cashier just kept checking them out expressionless.. I stood there laughing my ass off hard.

The conversation was everything from white privilege, to take your ass back down south and collect welfare checks, to I hope you die from Covid.. It was everything and more!

I've found myself not really caring anymore and finding this all to be one big comedy show. I wish that wasn't the case, but people are getting too aggressive these days to even reason with.

Hahah whooaa, people are amped up! Yeah man, I'd be down for a good bake session after witnessing something like that. Sometimes I don't even like being out in public anymore. It's not a fun adventure anymore. It's a minefield.

"Indeed there are many layers to the Covid agenda, and division ranks very high, as it makes nefarious agendas like depopulation a little easier if everyone's fighting over the fine details instead of recognizing the real enemy."

Ding ding ding, perfect summary of the scene we find ourselves in.

Much love and respect from Southern BC. Stay strong and be well bro.

Wouldn't be shocked to see signs like that one soon : (
Upvoted and reHived.
!LUV

What do you expect, with Trudeau at the helm, the feminist globalist traitor...
The Canadian govt openly endorses Critical Race Theory.... racist bullshit. BARF!!

This covid thing is getting crazier by the week.

So true, and just think, we've been saying that for over a year now...
What are things going to be like in another year?
!LUV