This Is Not Working

drutter (71)in Informationwar • 3 months ago

Covid illness and death is sweeping Israel and threatening to collapse their health care system, economy, and entire society. They are in their worst wave of hospitalizations yet, despite being the first country to vaccinate, the first to use vaccine passports, and the first to issue 3rd injections aka "boosters". Meanwhile, countries that haven't vaccinated or locked down have already defeated the "pandemic"! Despite heavy propaganda coming from mainstream media outlets, the picture is becoming more and more clear - these "vaccines" don't work, and actually cause more illness and death than the virus does. Yet Western nations are scrambling to coerce and mandate compliance, pushing as many doses into as many people as they can. What's going on here? 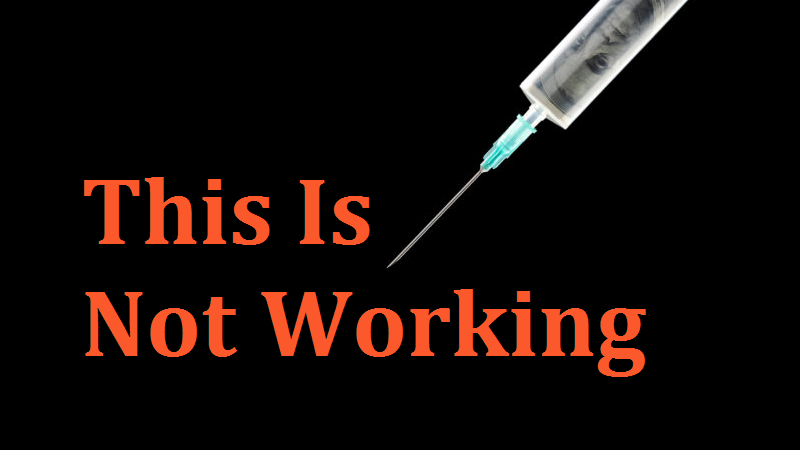 Israel is a mess, and getting worse all the time. But countries that have completely ignored the Covid psyop from the beginning have yet to have any problem with it! Africa, with very little health care infrastructure, has seen 200,000 Covid deaths in these first couple years. Their total population is 1.27 billion, which means 1 in 6375 has died. In Israel, 7383 deaths among 9 million citizens means they have seen 1 in 1263 die with Covid - multiple times worse than unvaccinated Africa. If we look at Europe as a whole, it has lost 1.2 million out of 746 million total, which works out to 1 in 621. You are TEN TIMES more likely to die of Covid in Europe as you are in Africa!

Those differences are not being talked about in the mainstream. And they can't be explained away as coincidence. This is a MAJOR indication that not only are the vaccines not working, they're doing us a LOT of harm, and the increase in illness justifies keeping the pandemic response (lockdowns, restrictions, mandates) going.

In the USA, despite mass vaccinations and restrictions, more than 1 in 500 citizens have died with Covid, making it one of only a few places worse off than Israel. Biden has just announced a new push to vaccinate the remaining American holdouts, by force if necessary, including 5 year old children. What could go wrong?

Sweden, which did not lock down, and did not mandate masks or vaccines, has not had a 3rd or 4th wave of illness or death - their population has achieved herd immunity without widespread vaccination. It appears Covid is only a problem if you want it to be.

Israel is rolling out a FOURTH injection. "Our life will be in waves from now on," their leaders tell them. Anyone who stops complying with injections has their passport deactivated and is removed from society. 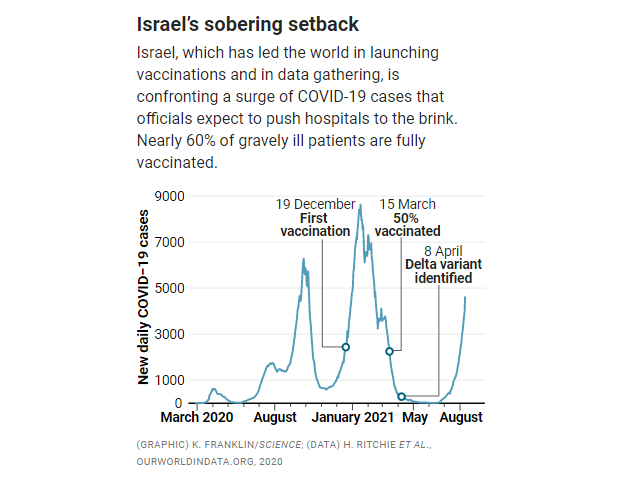 In Israel - the country with the best and earliest data - the majority of gravely ill patients are fully vaccinated. If the mass vaccination campaign, lockdowns, masks, restrictions, and passports have had ANY positive overall effect, it is difficult to see it. Claiming "this is now a pandemic of the unvaccinated", as essentially EVERY mainstream outlet is currently doing, is a preposterous lie.

It's a pandemic of deception, is what it is.

Let's compare deaths straight across in some of these noteworthy countries. This comes from official data, for what that's worth. 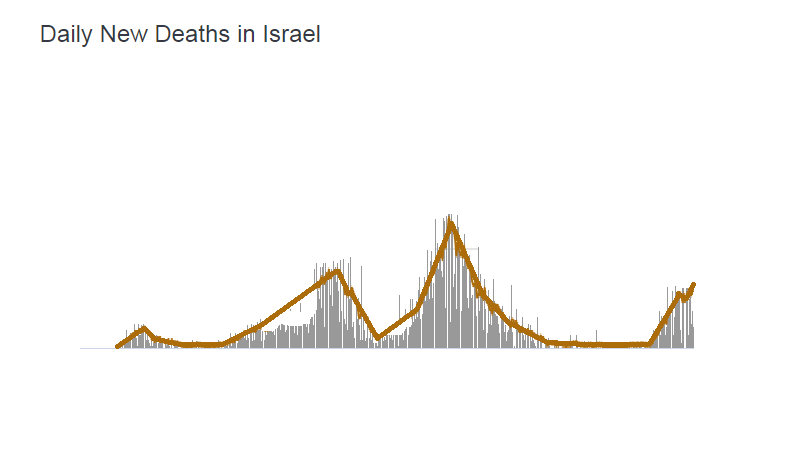 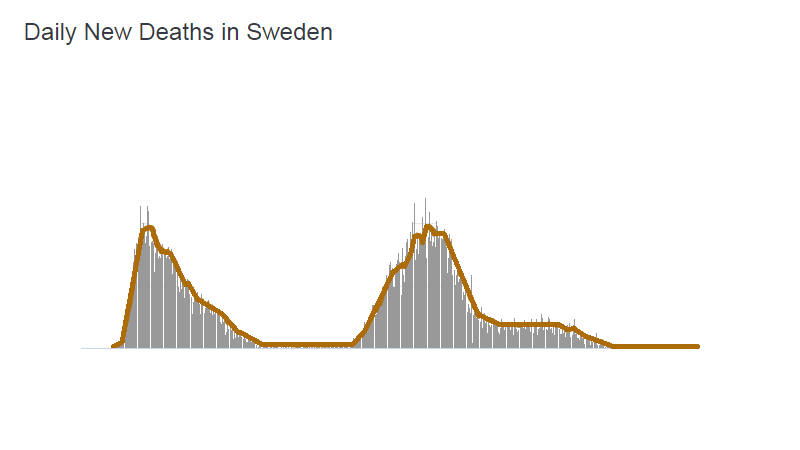 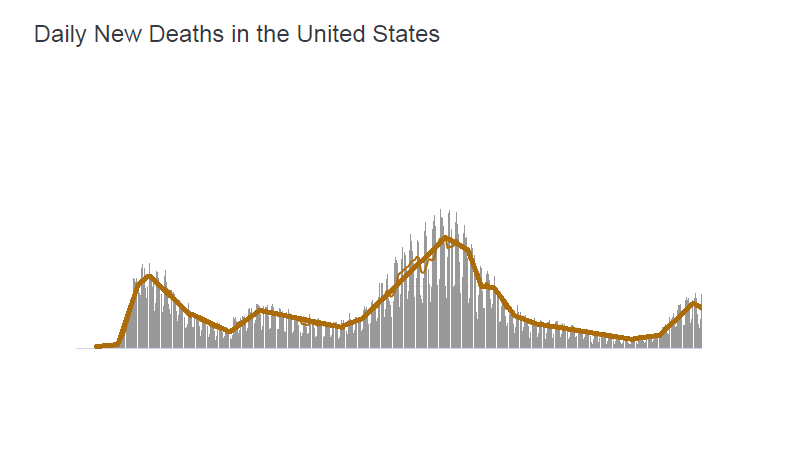 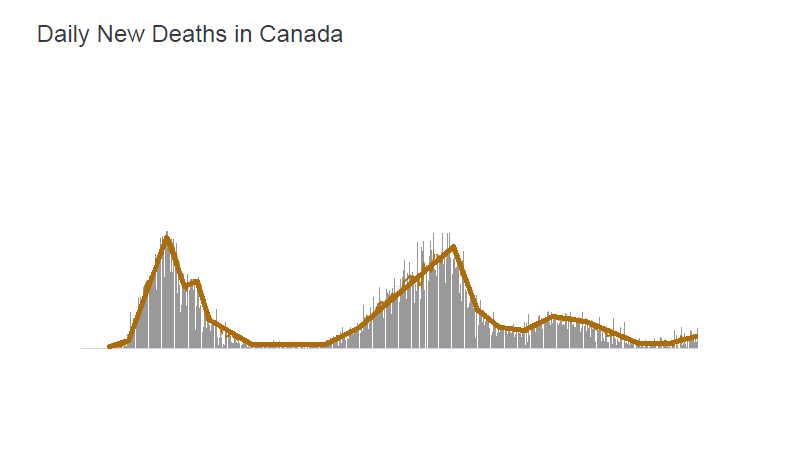 It's hard not to notice Sweden's complete lack of recent deaths. They were criticized early on, but they were right. Now, you almost never hear about Sweden in the news. And instead of switching strategies and doing what they've done, we're doubling and tripling down on our mistakes. Now we're pushing through vaccine passports and dissolving almost all human rights, because of that tiny fourth wave in Canada? Even fudging the number upward the way we do, there's still almost nobody dying. Any threat from a virus was over long, long ago. Now the only threat is from those tightening their technocratic noose around the throat of humanity.

Sweden has banned all travelers from Israel because so many of them are spreading Covid illness and death. Please allow that to sink in for a moment. Sweden (few vaccinations or restrictions) is having to protect themselves from Israel (most vaccinated and restricted country on the planet).

The "vaccines" are not vaccines, and they don't do anything to stop - or even slow - Covid illness and death. In fact, what we're realizing now is the injections may be the cause of the variants, leading to more illness, death, and the need for even more injections. A self-inflicted vicious cycle.

We know naturally immunity is superior to anything that can come from a lab, helping to explain why Israel is falling apart and Sweden has triumphed, and why the USA is struggling while Africa is coming through just fine.

We also know that it's the spike proteins (found on the surface of the SarsCov2 virus, and created by the trillion in your body after vaccination) which cause Covid illness and death.

We are injecting billions of people with a brand new technology that makes them sick and sometimes kills them. Period.

This Is Not Working!

Interesting statics comparing Europe and Africa.. 10X is huge.. and normally it's Africa getting shit on..

There are two confounding factors: much lower obesity rates and the use of wide spectrum antimicrobials like IVM and HCQ,

Threatening the collapse of the healthcare system, now where have we heard that before?!

Love your work. Spare us aussies a thought in our police state dystopia. Thank you!
I don't know if there's anyhthing I can say that you arne't already aware of. You seem to be covering the Covid news down there quite well. What a disaster. You are a little further along than Canada in some ways at the moment, although not all. But it's not a race or contest... we're in this together against the globalists.

I think it's working exactly like they hoped it would.

I watched a video on mRNA technology last week: Really scary stuff! Nobody knows, where this is leading to..? !LUV

So very true! We have absolutely no idea.
And yet you can say that in the mainstream and people will slam you for it. Like "you can't say that" and "it's not an experiment". People with almost no understanding of the situation have the largest (and scariest) opinions. Some are calling for blood, or at least letting unvaccinated people die! That's sick. Hopefully they see the error of their ways soon and we can unite against the scumbags running this shitshow <3

I can't believe this is happening actually. Such a mess for the whole planet! :(