Image by Darkmoon Art in Pixabay

He stared once more at the hare's bruised body, or how little there was left after the tires hit it. He wondered what additional damage the flimsy creature could have done to cause his car's engine to break down. He hated those setbacks, especially when he had an important business meeting. If the car hadn't broken down he would already be entering the city.

Damn animals! she muttered, kicking the wheel. It was not the first time that a representative of the animal kingdom had been the victim of his car. The previous occasions, nothing happened apart from the impact with the animal that was thrown in front of the car or the vibration that it felt when the wheels passed over its body.

Of course, his business required immediacy and for that reason he could not drive at low speed and he was not going to put his life at risk by suffering an accident by trying to avoid the small animals that crossed his path.

He looked at the trees that surrounded him and in the middle of which the road wound, silence dominated the landscape. She got back in the car and tried to start the engine. It did not work. He grabbed his cell phone from the passenger seat just to check it was still out of range. He tossed the cell phone and got out of the car once more. Okay, he was in the middle of nowhere with a broken down car and isolated but some other vehicle would have to go through there.

It would have been preferable to choose a more central place to spend the wedding anniversary, but Gertrudis always got those rustic ideas as a form of celebration and when that happened it was impossible to make her change her mind. And when company business required his presence, he had to come no matter where he was at the time.

He scanned the sky streaked with tree branches. It was getting dark? It couldn't be, It was still very early, he raised the left sleeve of his shirt to reveal the Rolex. He scanned the watch. It was only three-thirty in the afternoon. Why did the day seem less bright? Maybe he was getting paranoid.

Went once more to the car, he opened the back door and walked in. He got hold of the portfolio and, opening it, began to examine the documents it contained. Yes, the company would finally buy the land. Of course, he would have to convince some partners who were always reluctant to how much acquisition the company wanted to make. It was because of these types of individuals that businesses did not prosper as they should. The purchase of "Los Eriales" was something that should have already been consummated, if it had been, they would already be in the construction of ... An overwhelming noise brought him out of his musings. Was it a howl? A squawk? He couldn't say for sure, he put the papers aside and got out of the car.

The day was now darker, he took a few steps around the car trying to see the origin of that sound in the surroundings but nothing was seen in the foliage. But looking at the crash site, he froze, the hare was gone and it wasn't just the body, the blood that had stained the asphalt and the tires had disappeared, it was as if he had never been there. Still lost in surprise, he checked under the car, knowing in advance that he would find nothing. Was that a reason to worry? He could not deny that the situation disturbed him, but everything had a logical explanation, if the rabbit was not there it was because some other animal devoured it and had licked all the blood, and that animal could have produced the howl that he had heard. But the explanation did not convince him at all, besides, that animal could not attack him?

He got into the car once more and tried to start the engine, nothing happened. He had to learn mechanics and carry his toolbox, if so he might have already solved the problem. He got out once more, now more concerned. He wondered why another vehicle hadn't passed. He turned and took the cell phone from the car, looked at the antenna icon on the screen looking for coverage and walked a bit down the road, he would have to look for a high place, maybe there was a house there.

As he walked down the road he looked both ways, wishing at the same time to hear the familiar sound of a car, but only silence surrounded him. Shortly after, he found himself in front of a small path that went into the forest. Could it be the access road to a house? There were no tire marks, but if there was a car perhaps the owners had not used it lately because it was broken, it was a probability.

He went down the road while looking at the mobile. At the same time he began to get the feeling that he was being watched. He stopped suddenly, focusing his attention on the foliage. It was impossible for him to see what might be in the thicket, but he could almost assure that there was something there. He noticed how quickly darkness was closing in on the place. He checked the time on his cell phone. Could that be possible? It was only four thirty in the afternoon.

He advanced a little further until his walk was interrupted. The howl had been heard again with a gloomy echo around him, he sensed that the origin of that noise was behind him. He felt a cold sweat run down his back and he began to turn, expecting to find some strange animal ready to attack him. Was that really what he was afraid to see? No, his growing fear envisioned something worse, one of those fearsome creatures that inhabited the dark nightmares of any mortal. However, there was nothing there. But what was presented before his eyes was totally different from what he had traveled, the foliage seemed to have multiplied and the main road, from which he had only gone a few steps, had disappeared, desperate and a victim of terror, he ran towards where he assumed the main road had been, while among the dark recesses of the foliage creatures with luminous eyes seemed to appear and began to approach him threateningly. Soon his steps became heavier and his vision began to blur, but not enough to prevent him from contemplating the strange figures that seemed to take shape from the foliage itself, beings that approached and surrounded him. Soon he felt his strength leaving him and he no longer knew about himself.

He couldn't tell how long he was unconscious until a noise was heard in the distance. As he became aware of himself, the sound was increasing, when it already occupied almost all his hearing capacity, he opened his eyes and he barely had time to avoid being hit by a car. It was a car that was passing at last, he put his fright aside and ran after the car screaming to get the driver's attention, but ... something was not right. Why did this car seem huge to him? Even the road was huge, besides, his screams… his screams were not heard like his screams. He stopped in a terrible uncertainty. He raised his arms and looked at them. A cry of panic rose from his throat.

He run into the thick of the forest. Shortly after she found herself in front of a stream that formed a pool of calm waters, confused and in a panic he started to approach the shore but stopped. In his mind the most unlikely ideas were presented, but for him they had a strange certainty. He resumed his cautious advance and a few seconds later he was on the shore, he looked out before the calm waters and what he saw made him cry out in horror, the image of the puddle was not that of the man he had always seen in the mirror and who was currently around forty-six years old, the reflection that the waters returned was that of a hare. 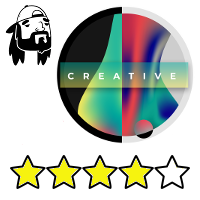 Congratulations @exilon! You have completed the following achievement on the Hive blockchain and have been rewarded with new badge(s):