Since my last jumping spider shoot, things have evolved and there has been changed in my jumping spider family. My son decided to give names to my three original spiders: Mioly (Servaea Villosa), Shimily and Sagna (both Opisthoncus parcedentatus). Sadly, Shimily died of old age and I released Sagna back to the garden because she started refusing food after giving birth to infertile eggs. In their place, I decided to get two other Servaea sp. and one other Opisthoncus parcedentatus. To host them, I had to create an extra enclosure from some old DVD cases. 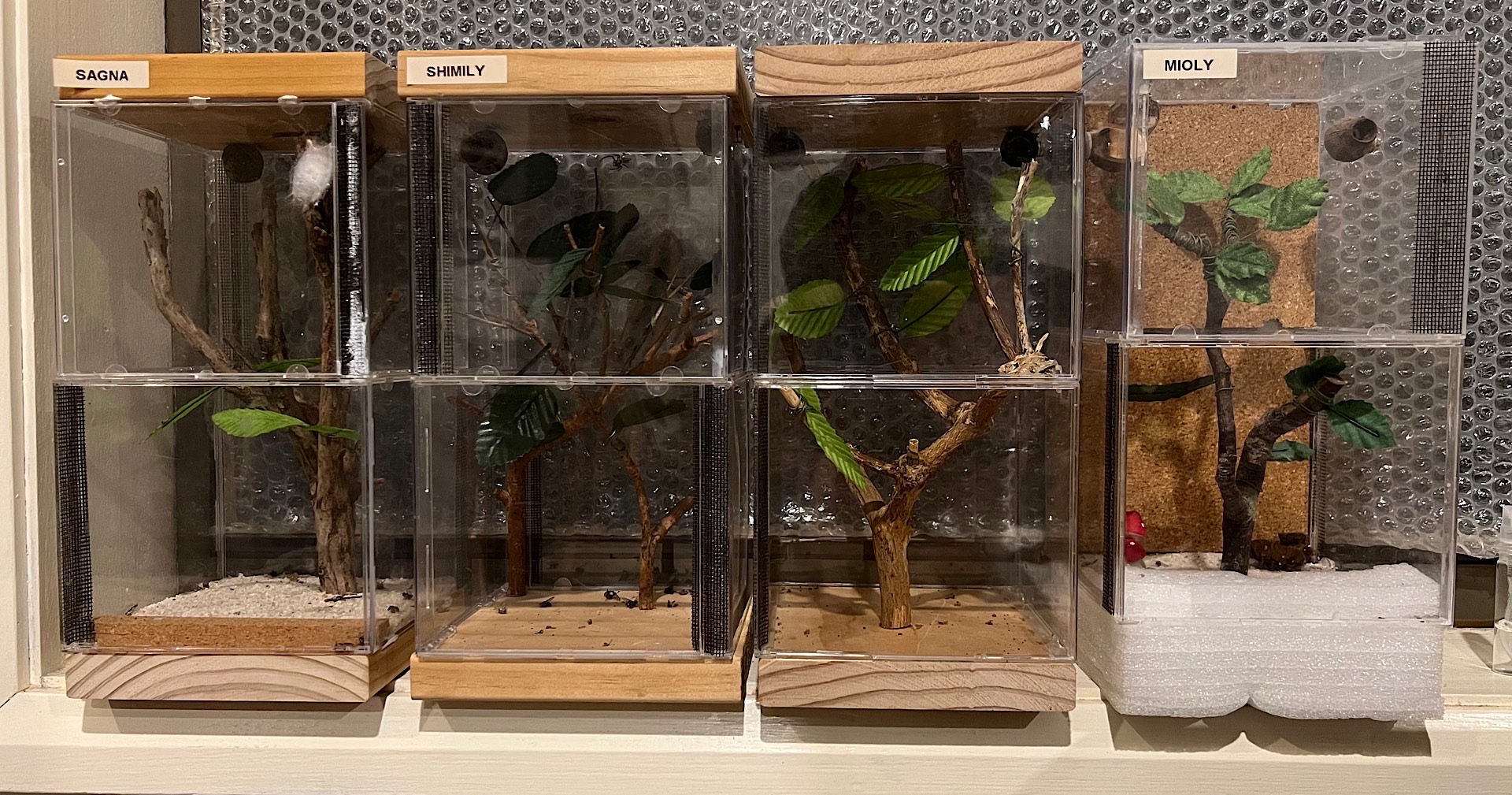 Few days after capturing them from the backyard, one Opisthoncus and one Servaea hid away for several days and suddenly both of them dropped off their skin, they molted! Yay, that was the first time I saw that. So I organised a photoshoot of their little cute helmets. It's amazing to see that even their eyes were covered with a kind of skin, makes it look like a set of goggles. 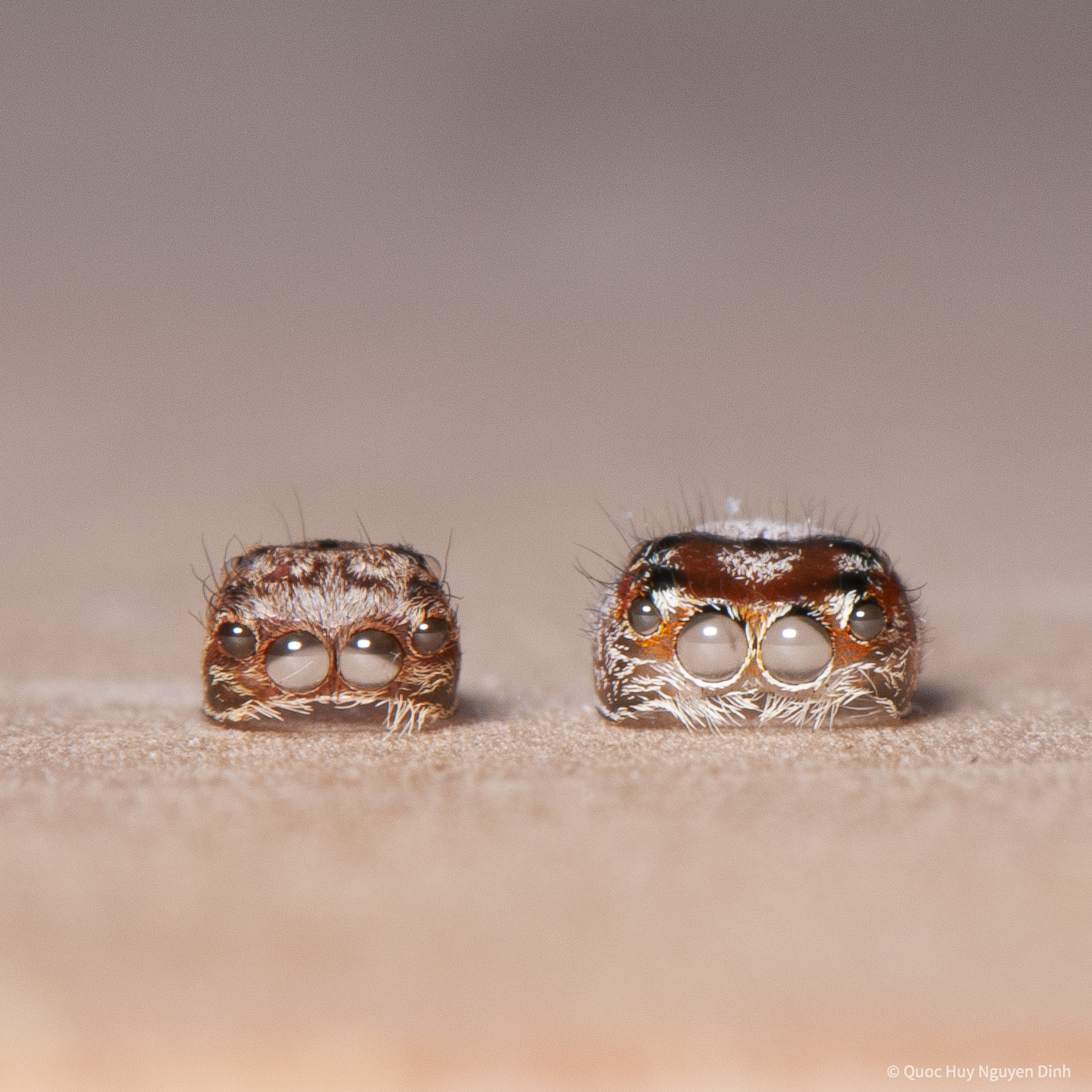 One of the Servaea was a very aggressive hunter, after the molt she was very hungry and wasn't afraid of going after a fly that was larger than herself. 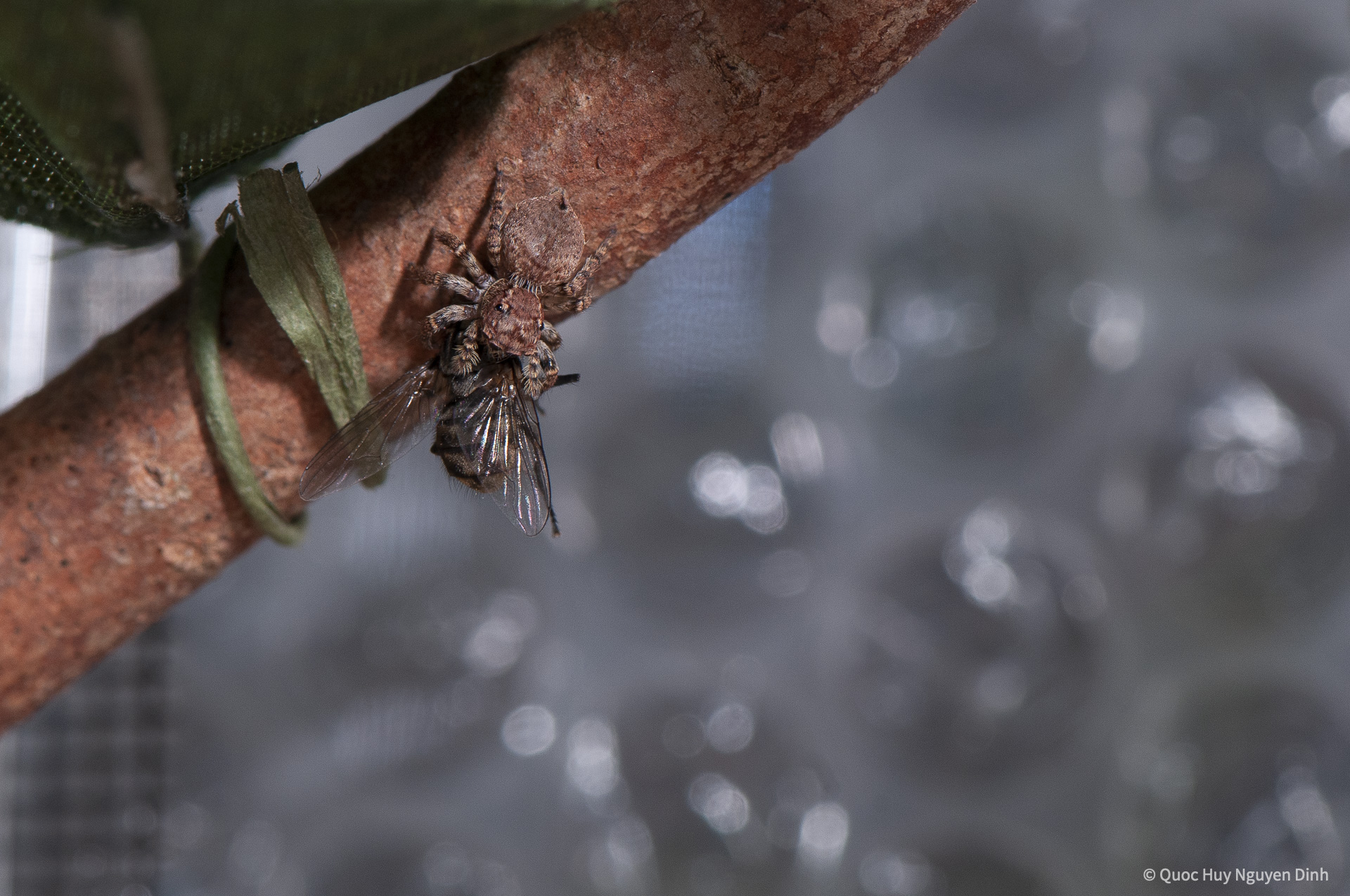 The second one is a bit more timid and would only go after smaller insects such as fruit/vinegar fly or long-legged flies. In the photograph below, you could see her safety rope coming out of her rear-end and secured to a spot on the branch. She often jumps at the flies wherever they are and fall with the fly into the void but get saved by her rope and would dangle around like that until the venom immobilises the fly and then she would climb back up the rope. 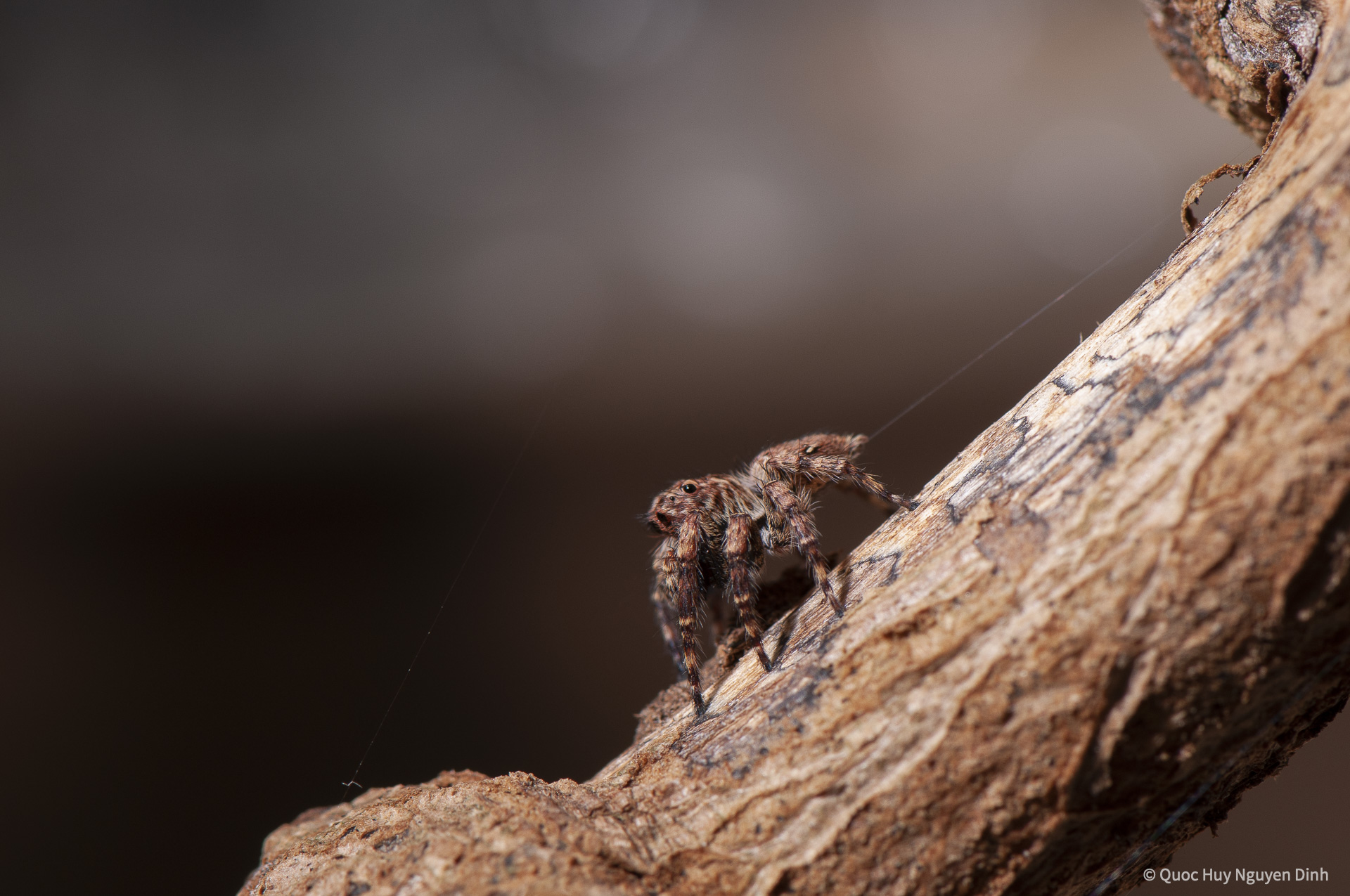 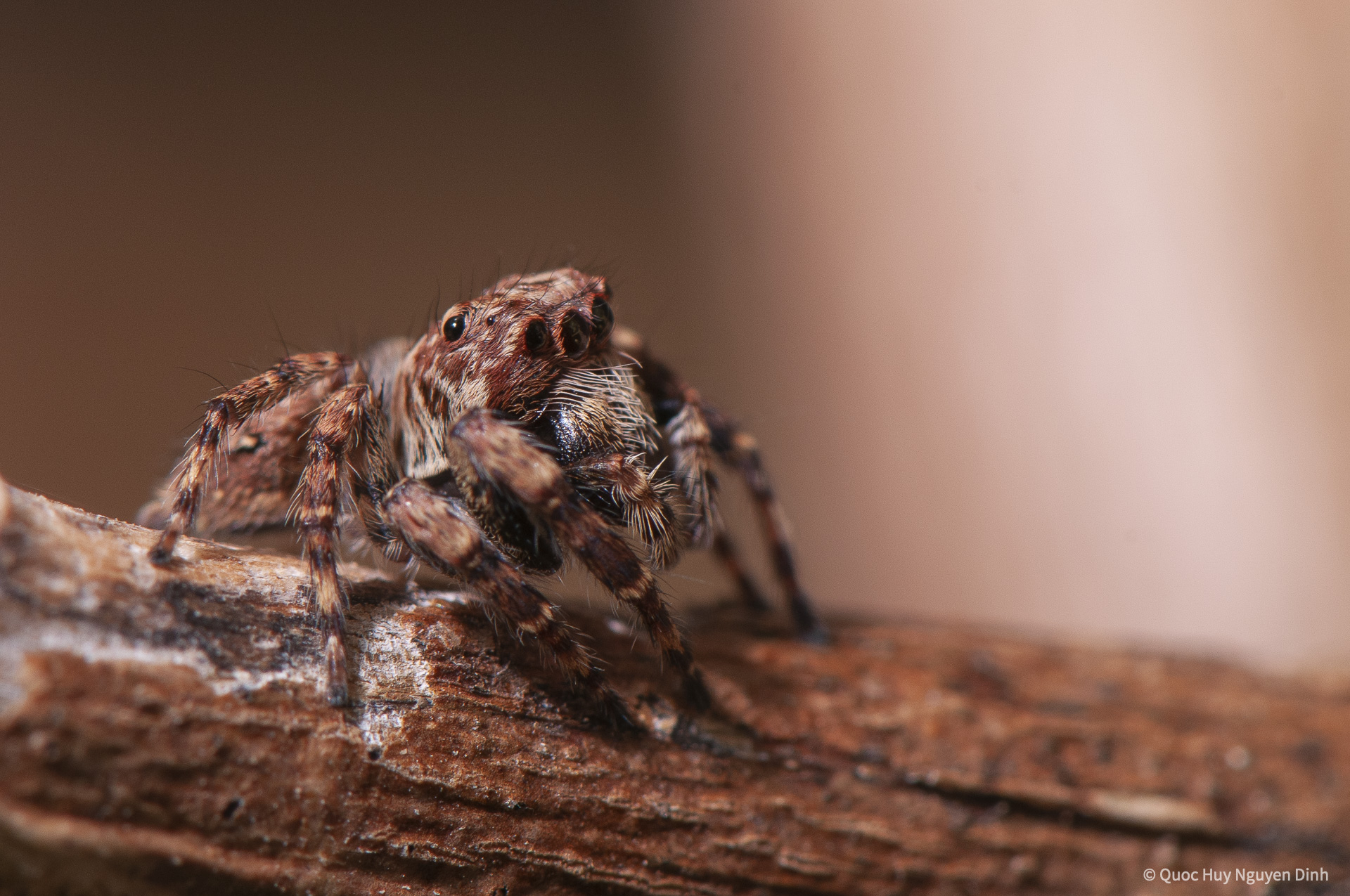 I initially liked the Opisthoncus parcedentatus more because they are bigger but I ended up preferring the Servea species now because of several points: 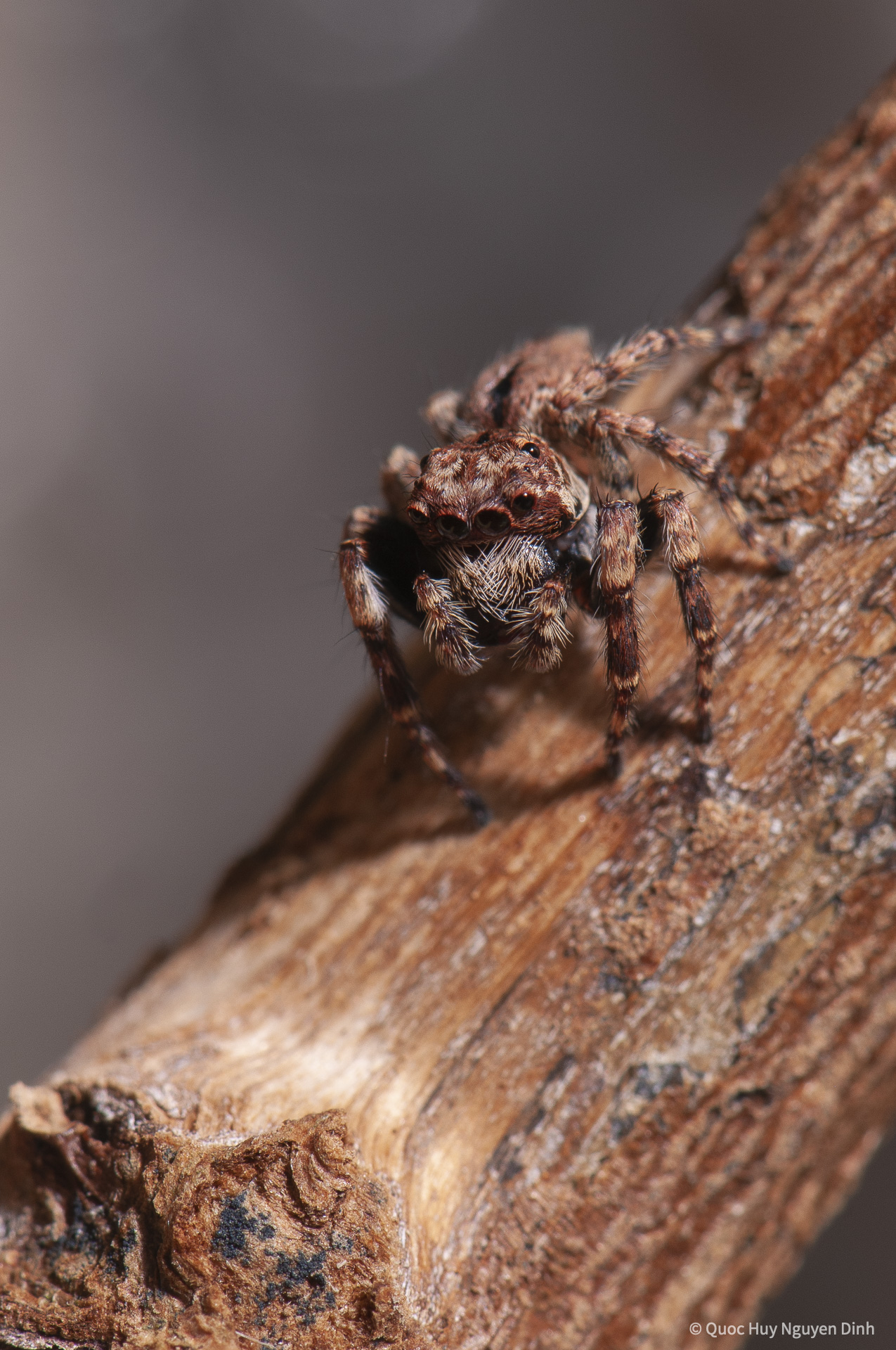 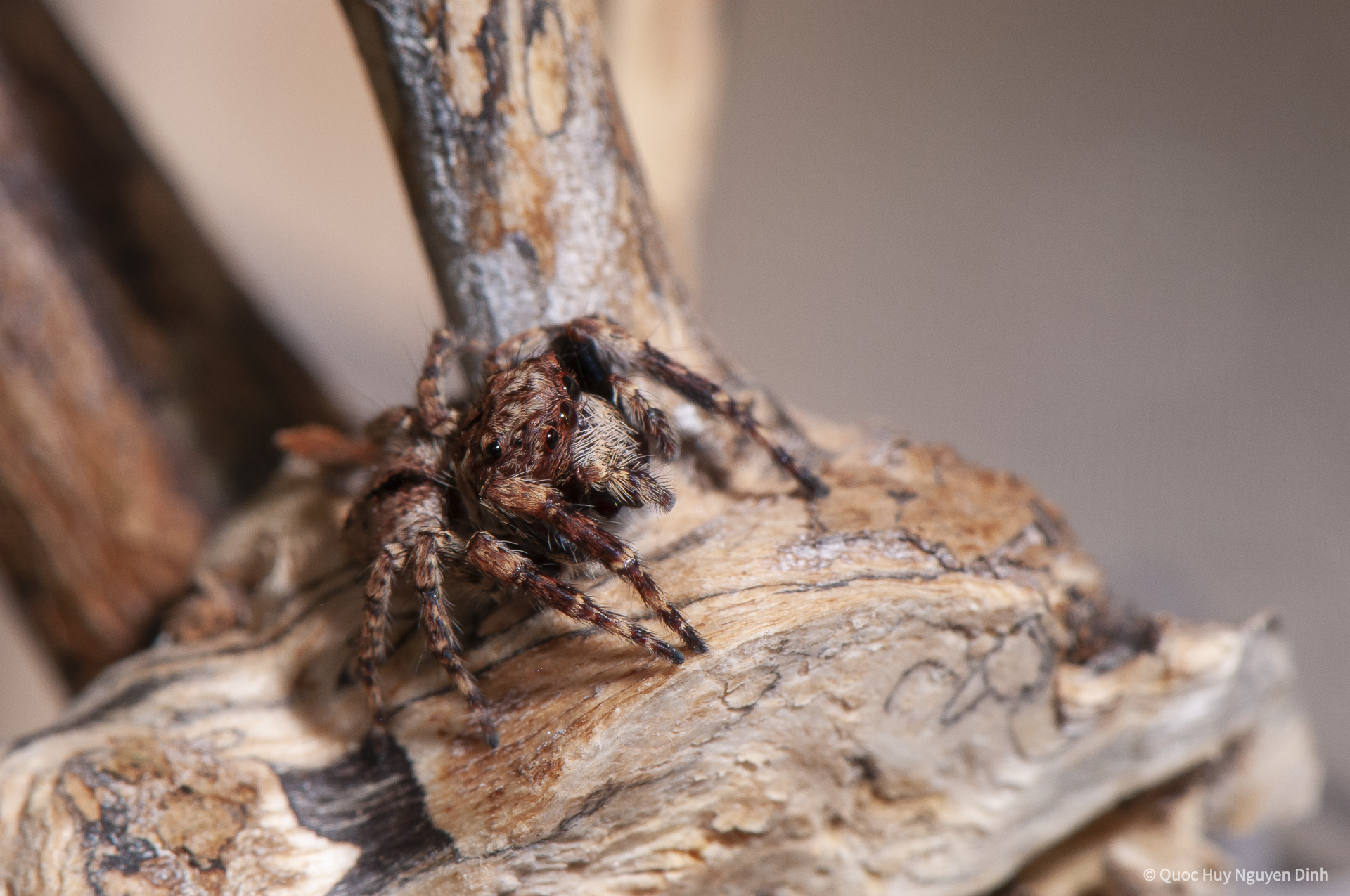 I took the photos above with the following gears:

The flashgun was handheld so I could move it around until I got a light angle that I liked.

These are some incredible shots, Kola! Very cool your son has this opportunity to experience this :)

hey thanks mate. yea, and he finally found a spider he's not afraid of

Not gonna lie, I still get a bit uncomfortable around certain spiders myself 🤣

Wow! This is so much better than the wild jumping spider that I posted earlier this morning.
Even my wife agrees.
Well done.

Hi there. I hope life is treating you well. Thanks for the kind words. Photos in the wild are more complicated. At least with mine it’s a controlled environment.

Just answered your other reply and one day I will have better macro equipment, but for now the Canon has to do. I bought it for it's super zoom qualities, as now I can get clear moon shots and high flying birds.

Super zoom is cool!
I think it has a macro mode too.

Oh yes and it does have a macro and many other settings.
What I like is that it has only one fixed lens and I don't have to battle with lens changes when I take hurried action shots.

Will try get sometime to build another one and get some photos and videos of the process.

Sadly, Shimily died of old age and I released Sagna back to the garden because she started refusing food after giving birth to infertile eggs.

She got depressed... So sad

Yay, that was the first time I saw that.

This must have been so cool.

This is adorable and informative! Love the shot of the exuvia! Little helmets, haha. Good luck on your new ones, sadly they have very short lives compared to ours but they're worth it.

hahaha ⛑
Yea indeed very short lives, at least you can see them grow quite quick.

Wow this is really nice with the lovely capture of the spider, it's amazing and a work well-done.

Gosh this is an interesting hobby. I can't say that I'm a fan of arachnids but you have a way of making these little critters look cute under the macro gaze of your lense lol. Do you always bring in your babies from the garden to raise indoors or are some of them acquired more exotically though petstores or the like? I do like that you release them back to the wild if they are not taking well to a more captive and controlled environment.

Thanks.
They are all from my garden. Some specimen don’t really like being in captivity, they’d stay hidden in their hammock and won’t come out. I only keep those that adapt fast.

Do the ones you keep ever have babies? How do you handle that eek? seriously could not imagine hundreds of baby spiders all looking to escape into my house every time I opened the lid. I think this post is gonna give me nightmares tonight lol 😂😱

One of them made eggs but all infertile. I don’t mind them escaping into the house. They’d help with pest control lol.

Cool shots, must have taken tons of pictures for your selection.

I'm getting good at it now, only took me about 30 shots I think, used to be much more lol.

Focus and attention to detail and if those fails then a bunch of hella shots will always solve the problem.... maybe

Patience helps too. Just wait till you get (almost) everything right before taking the shot.

Thanks. A normal Lens would be difficult to take photos of small insects but for portrait or landscape it should be all good 😊

Omg, kinda looks pretty, I like the second one, so shy and cute with her safety rope. I'm not a spider person but I don't hate it or anything, I have even held them in my hands. But they look cute 🥺

Jumping spiders are indeed very cute. I wish there were some larger specimens here in Australia

They are awesome :) How did you make the enclosures from dvd cases?

I used the cases and superglued them in place.

I never thought of that 🙌 I guess any clear plastic would work :)

Yes. The bonus with CD cases is that they already have hinges so the enclosure doors is built-in 😅

I guess you could make a full wall sized habitat if you wanted. It would be a beautiful display, and an ecosystem eventually :)

I initially intended to build a large vivarium with living plants and worms etc… but I’m not sure I have the time for maintenance. Additionally I read somewhere that it makes it more difficult to feed the jumping spiders as in large areas the prey have more places to hide and it might also be more difficult to find your own spider for observation later on.

I guess it depends on the purpose, if you want an enclosure to observe jumping spiders or you want a vivarium where you want to have a natural ecosystem with a jumping spider as part of it.

True! I think the wild spiders taken from the garden would be able to find prey, but it would definitely be harder to observe them unless you used materials that contrast to their color. And that may affect hunting...

Wow.
This level of photography should be studied.
These are some outstanding shots, vivid and clean.

Even more beautiful is the story shared about both spiders.
It is so interesting to see that these insects have unique personalities as well...

True. You’d think that being so small the brain of each individual would be the same and so would be their behaviour but they are indeed showing their own personalities

Indeed.
It is absolutely thrilling to see.

In a word, some extraordinary insects. The jumping spider looks beautiful as well as the first photographs.

That second shot do look really cute.
They are spiders as well or it's just their skin?

Wow I didn't expect spiders to look so cool and have so many eyes. Their helmets also look great with goggles.

Sad to hear that one of the spiders had died, but at least it is from old age. Your photo of the molted spiders is really out of this world. It really shows that nature is very beautiful.

These are great shots

Excellent and beautiful pictures. You acted very skillfully and professionally

I like macro photography. And your macro images are amazing @quochuy 🤝