The recent bull run and increased interest in the blockchain opened up a lot of new possibilities for many of us. Only 5 months ago a new Hive-based game has been announced by @rondras and @oliverschmid: Rabona soccer manager. Since that time both authors have been working tirelessly on adding new features and fixing many bugs along they way.

Today I am happy to announce another chapter in this story: a project for the new front-end interface for the Rabona game called dGoal. Read on to learn more!

dGoal is an initiative by @mciszczon. I've played Rabona for few seasons already and quite liked the game—it has got a lot of potential for growth, and with around 200 currently active players, I believe we're yet to see a major takeoff.

One of the major issues with Rabona that I have noticed is its very basic, text-based user interface which doesn't make it the easiest to accomplish many tasks. Current interface is not well suited for mobile phones as well, and that's pity—it's great to be able to log in from anywhere to check how that last match went or train your team.

After brainstorming for a moment and then discussing the matter with both Rabona developers and its most dedicated players I concluded that I'd be able to create a new interface for the game that would solve the mentioned issues, and I'd be able to accomplish that in a sensible time span.

For a few years now I have been working as a full stack developer focused more on front end matters, so I thought it's time to put my skills into work for the Hive community as well.

That's how the idea for the dGoal app was born. Taking advantage of the fact that I had an off week in my day-to-day job, I sat down and got to work. After few days a proof-of-concept app for dGoal was ready.

I decided for the dGoal name, as it follows in the steps of many other games and apps, which pride themselves in being decentralized and blockchain-based. At the same time, it's very straight forward to remember and suggests right away the theme of the game.

If you happen to be a Rabona user, you can already test out the prototype:

Currently the view is read-only, so you'll not be able to prepare for upcoming matches or view details of past matches. 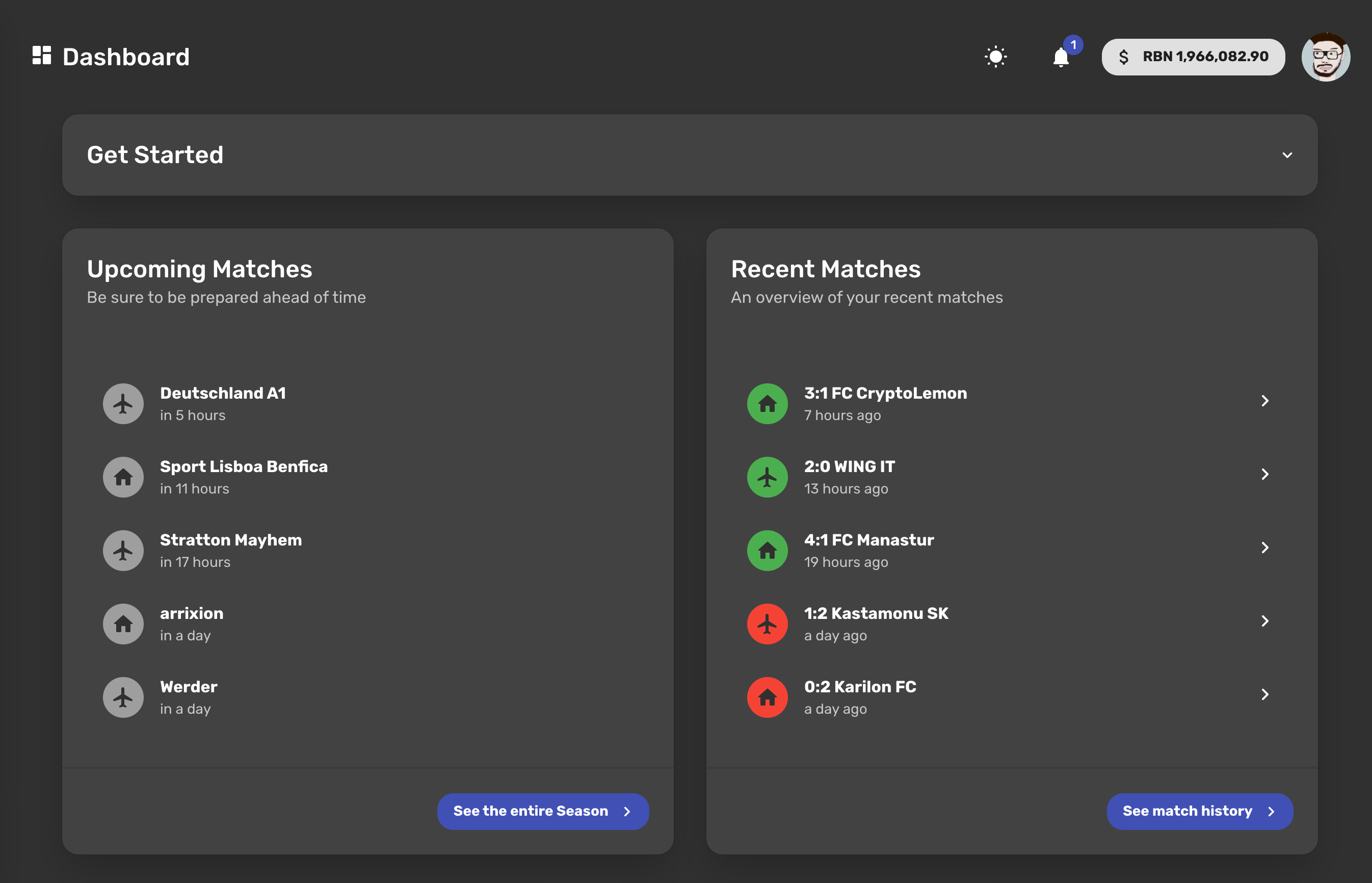 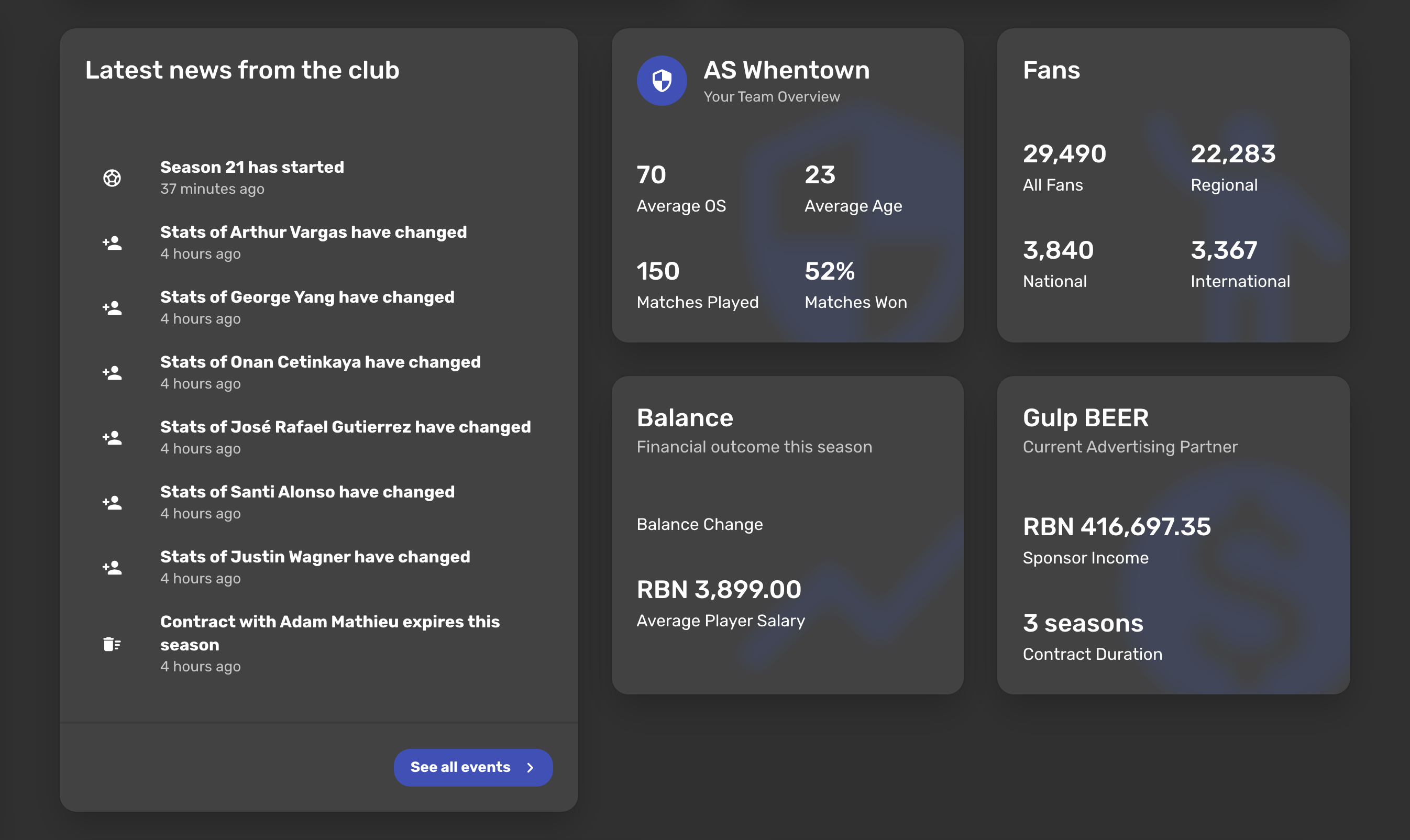 Even though dGoal is still just a pre-alpha prototype, you can already see some of the new features that have been implemented:

dGoal already allows its users to toggle between light and dark theme for the app. This was one of the most requested features by Rabona community and I see why: it's pain to use it at night time and definitely not great for you health. Now you'll be able to toggle dark mode and let your eyes rest.

Another problem that Rabona users have often is that they tend to forget to do some mundane tasks, or they miss the information that a given action can be taken. For example, some users complained that they forget to train their team once the cool down time is over. Others complained many times, that they forgot to extend contracts with their best players and lost them upon the end of the season.

Notifications are there to help players to never miss anything important in their game. Get reminded that a season is ending soon, that you have not signed an advertisement contract, or that you are not prepared for the next match.

Although you'll not be able to log in on your smartphone yet (Hive Keychain is coming to mobile soon!), you can already emulate a mobile phone on your desktop browser to see that dGoal is 100% mobile friendly. My aim is for the game to be operable in 100% using mobile phones, so you'll be able to play from anywhere—as long as you've got your phone and an Internet connection.

This announcement is an important step for me: it brings dGoal from my drawer and out into the world. A road from here to the finished product is still a long one, but I hope you'll all join me in this journey and we will get there together!

In the coming days I'll be implementing more and more features. A rough roadmap is as follows:

Soon I'll reveal more details about the detailed roadmap and some community incentives. One thing that I can share with you right now is that I am planning on setting up a community-feedback website where all of you will be able to propose new features and vote which of them should be implemented first.

In the meantime, here are some things that you might do if you're interested in the project:

Please follow @dgoal account on Hive to stay updated with all the work that I'll be doing. I would love for this project to be heavily community-consulted, so expect many posts where I'll trying to collect community feedback on what to work on first, what new features to implement and so on.

I'd be more than happy if you leave a feedback in the comments of this post. Whether you're a Rabona player or not (yet!), feel free to leave a comment, give some ideas or criticize what deserves to be critizied.

If you have not already, you can also join Rabona Discord server to stay in touch with Rabona's creators, dGoal developer (@mciszczon) and other players. Apart from discussing the dGoal project, you'll be able to talk to other players, trade in-game players and so on.

You can join using this link: https://discord.gg/FQJW7zG.

Congratulations for this amazing front end that will improve the user interface with game.

If you want I can try to help you with something.

I love how dGOAL already looks - elegant, tidy, and a good structure (information architecture). I love the name, the dark theme, and the notifications.

As I said before, You are free to use...

...under an MIT license.

As soon as dGOAL is a bit more playable, we will link to it from the official frontend, the Discord server, and will mention it in posts. You can even have a dGOAL channel, just let me know.

Thanks for all the support, I appreciate it so much!

A dGoal channel added to Rabona Discord is a great idea, I bet it will come in handy sooner or later :)

Wonderful ... I like this project and it is difficult to wait what the app can do when it goes live!

Thanks for the kind words and incentive! It really helps me to keep me motivated!

This is a great move and a nice addition to the game. On the other side I wonder... can't you join the team? With the proven skills you could push everything faster and help making a change from the core of it.

Maybe that's what's going to happen at some point, who knows? :)

Things are moving fast with Rabona

Looks great, and seems more simple and easy to understand than the current rabona, that is also pretty good already. Desing reminds a bit something like Pancakeswap. 😃

Maybe Pancakeswap also is based on Material UI components, like dGoal :)

Congratulations @dgoal! You have completed the following achievement on the Hive blockchain and have been rewarded with new badge(s) : Impressive! I love the Dark Mode! Even a bit more darker will be even better :)

Nice one, i will check out the new app when i am done. It would be great to have a mobile compatible app which for me has been the major deterrent from playing more. Cheers!

dGoal will be 100% usable on mobile. The only thing we're waiting for is for the Hive Keychain to become available as an mobile app, which it should in matter of weeks. It's now undergoing beta testing, so should be pretty soon! :)

I play from my smartphone. For this I downloaded the browser "kiwi browser" a Chrome clone I guess. I was able to download "keychan" and it works fine. It's a bit slower, but it was necessary to have my participation in this super project.

Congratulations for what you are doing, I'm looking forward to those new updates. It will surely make the project take off straight to the moon. Thank you!

Oh, that's actually pretty cool! Just looked it up and Kiwi Browser allows one to install Desktop Chrome Extensions on Mobile. Point for you for this intelligent hack :) Let's hope such measures will be unnecessary soon with the release of @keychain app for both Android and iOS.

I think this is a really cool interface - with a few added bonuses! Big fan.

That's strange. What happens to you if you try to open this URL: https://dgoal.app/login ? Does it also return the error page?