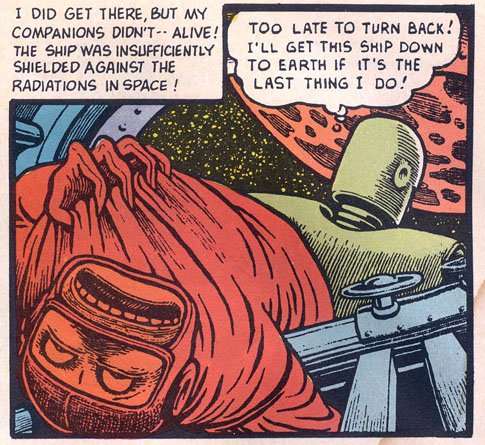 So,let's once again look at some older stuff worth tracking down or better yet having your local comic book shop track it down for you.

This one is a selfless recommendation indeed, because while the other stuff I've brought up recently can have little to no comparison made to my work, nor even be close enough to fear anyone's possible purchase ending up as a choice between my work and that. "should I get the dark humor comic with zombie fetuses, or the one with Captain America fighting Doctor Doom" is a question that would only be asked by a complete lunatic.

But this work here...in illustration and charm perhaps, could be comparable. 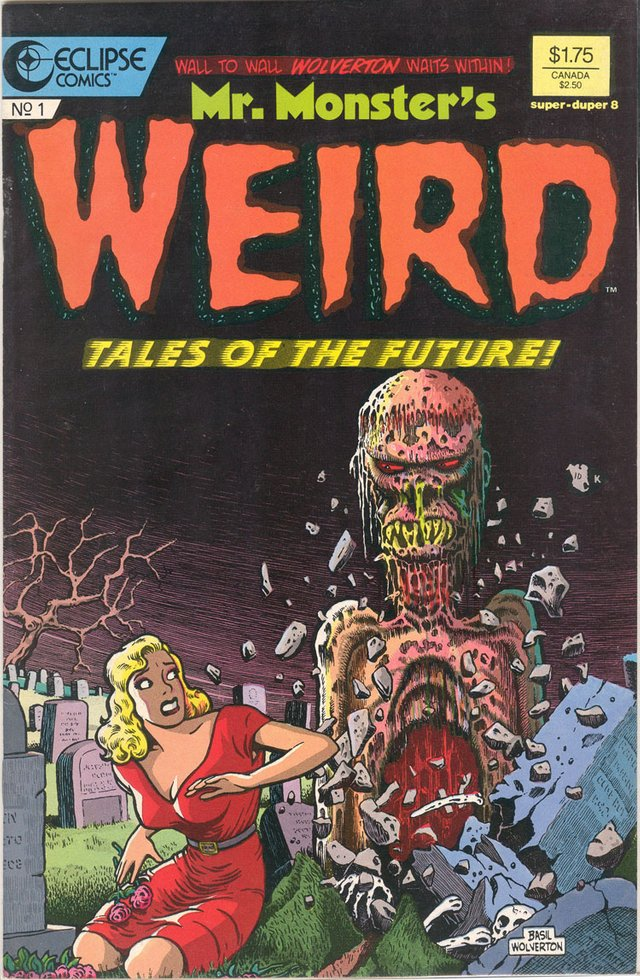 This issue here, a reprint of work from the early 1950's, caught my eye one day and may be partially responsible for my ever getting this far. At the time my knowledge and interest in comic books was what I liked as a kid- Marvel Super heroes. I knew nothing of Flamming Carrot, Reid Flemming the World's Toughest Milkman, or any other indy books I've grown to have great admiration for. To be honest, I wasn't even aware of Robert Crumb or any of the 70's underground stuff, which I loathe ( for reasons I can't quite put my finger on). I didn't know jack squat about any of that stuff until sometime later. I considered ( and still do) myself to be a comedian. Comics had little to nothing to do with the writing I wanted poison the world with.

But this, the look of it...put a light bulb over my head. 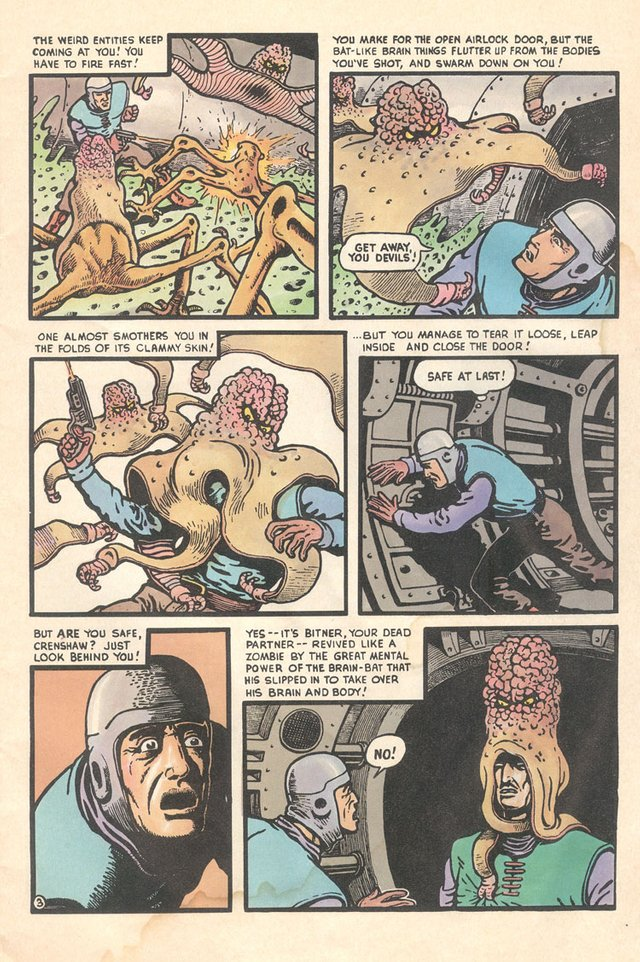 This wasn't capes and tights, or even crime fighting in a trench coat and fedora. It wasn't realistic or even trying to be. It was drawn by someone who drew the way I did...uhm...is what I thought to myself. Which I will freely admit was an absurd thought with (then) no basis in reality. More accurate would have been- this guy draws how things look in my head before I try to draw them. By that I mean it was cartoonish, but precise, refined, existing in a tangible world. Not like say The Far Side or Snoopy, or even Casper. This was detailed and fleshed out. 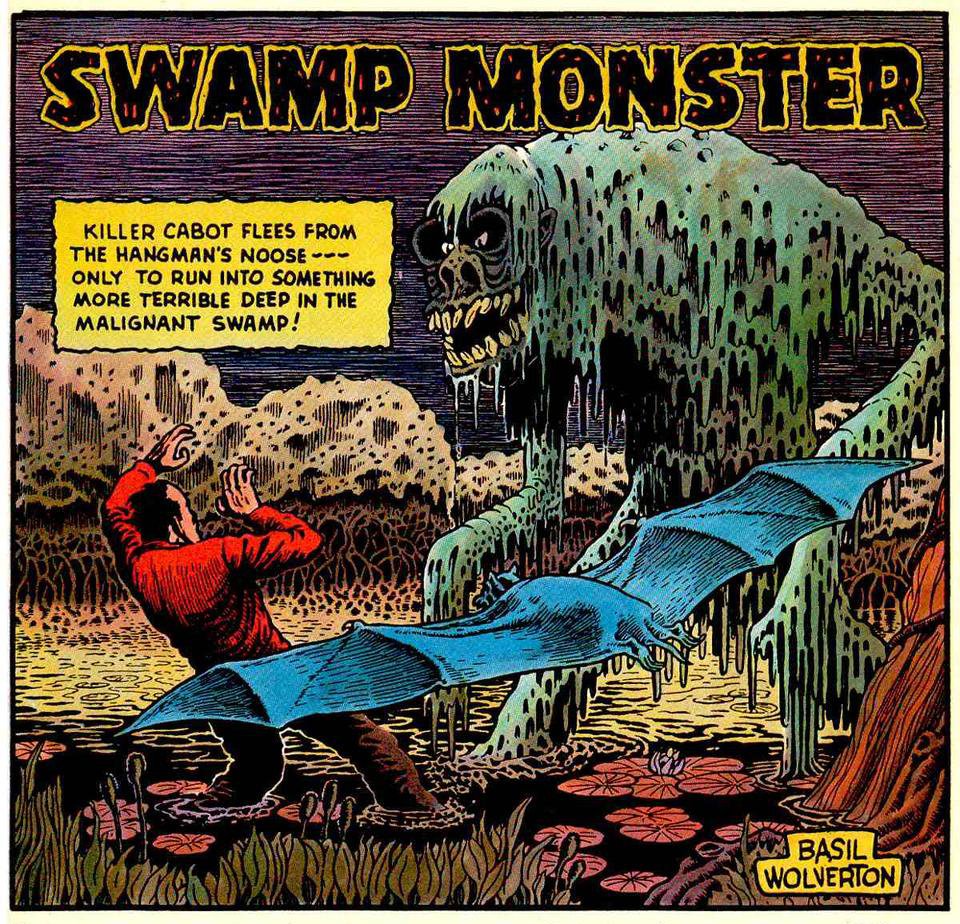 Basil Wolverton, I would soon discover, is legendary among those knowledgeable of the history of comics. His early stuff "SpaceHawk" was a bit of Flash Gordon and Buck Rodgers and lasted a long time. 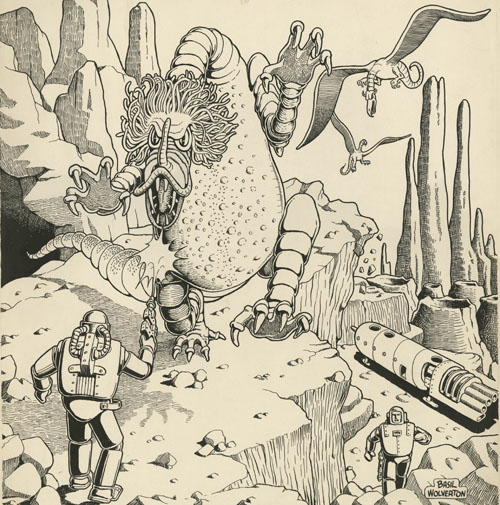 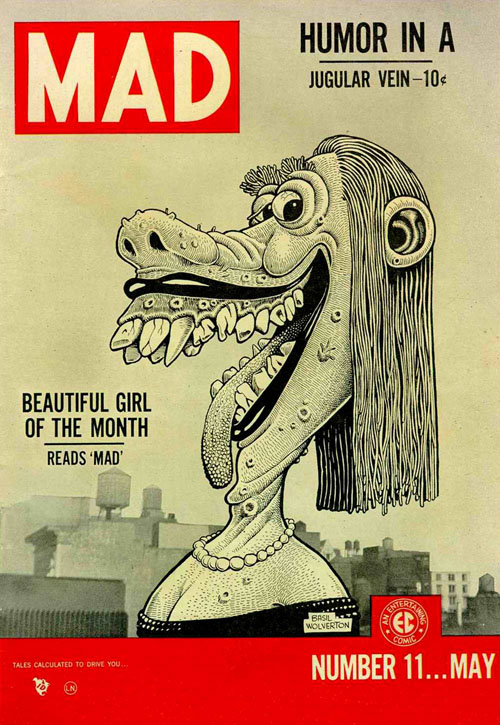 But the sweet spot if his work was the early 50s sci-fi and horror stories he contributed to different titles. Weird Tales of the Future is the best example of them all, and has been reprinted a number of times. You can find them is single issues ( like this one) or larger collections. 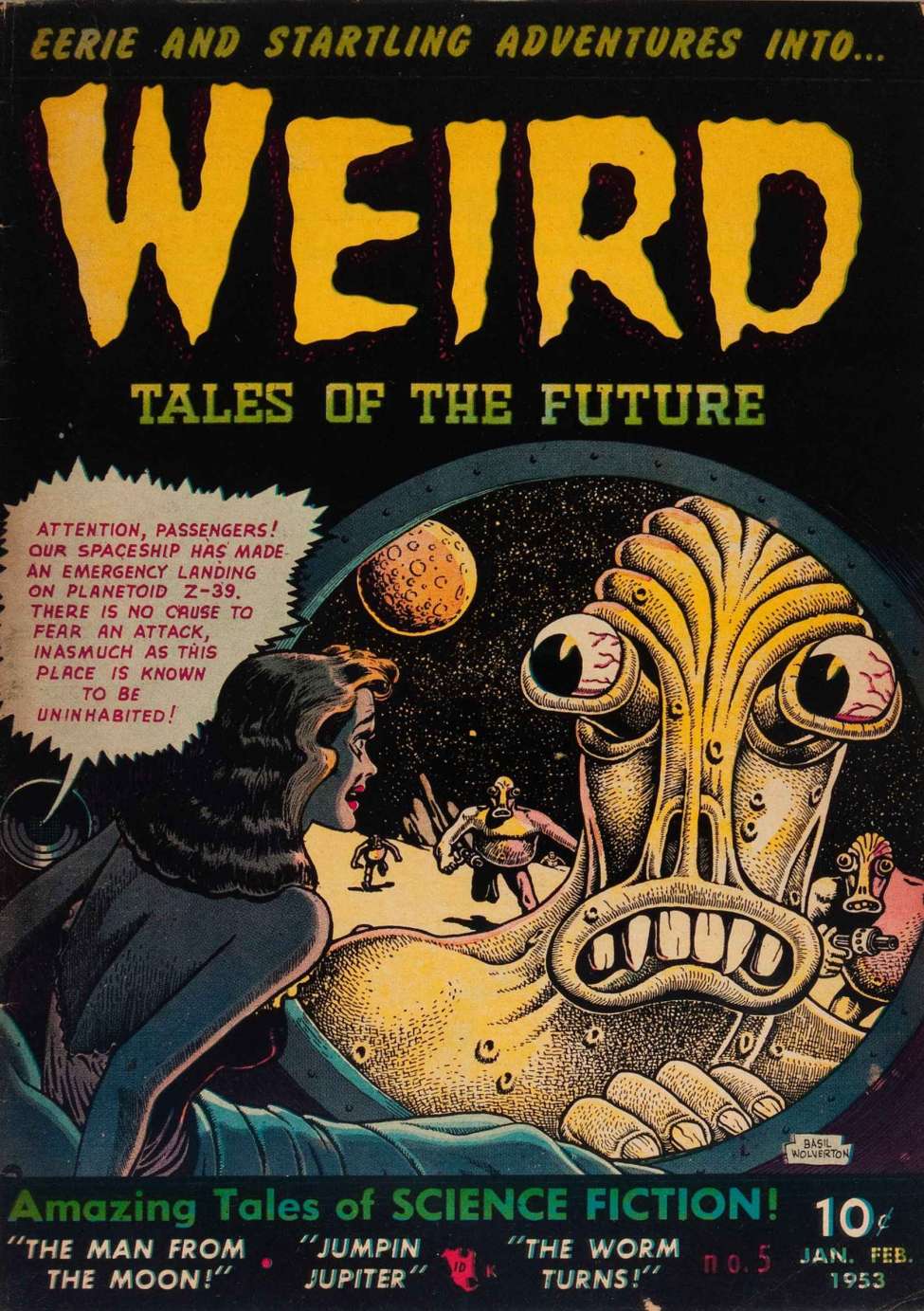 The illustrations are amazing and pull you right into a world outside our own. I can't say enough about them or the skill in which he inked them...the vexing part for me, as a illustrator, is how well the stories flow and keep your attention despite the fact that ...technically...a lot of his page layouts SHOULD be a visual mess. He often makes choices or mistakes in his layout that should make the page a visual equivalent of shrieking whistle. And yet...for reason I have not yet figure out ( not YET) they are not. They are beautiful. 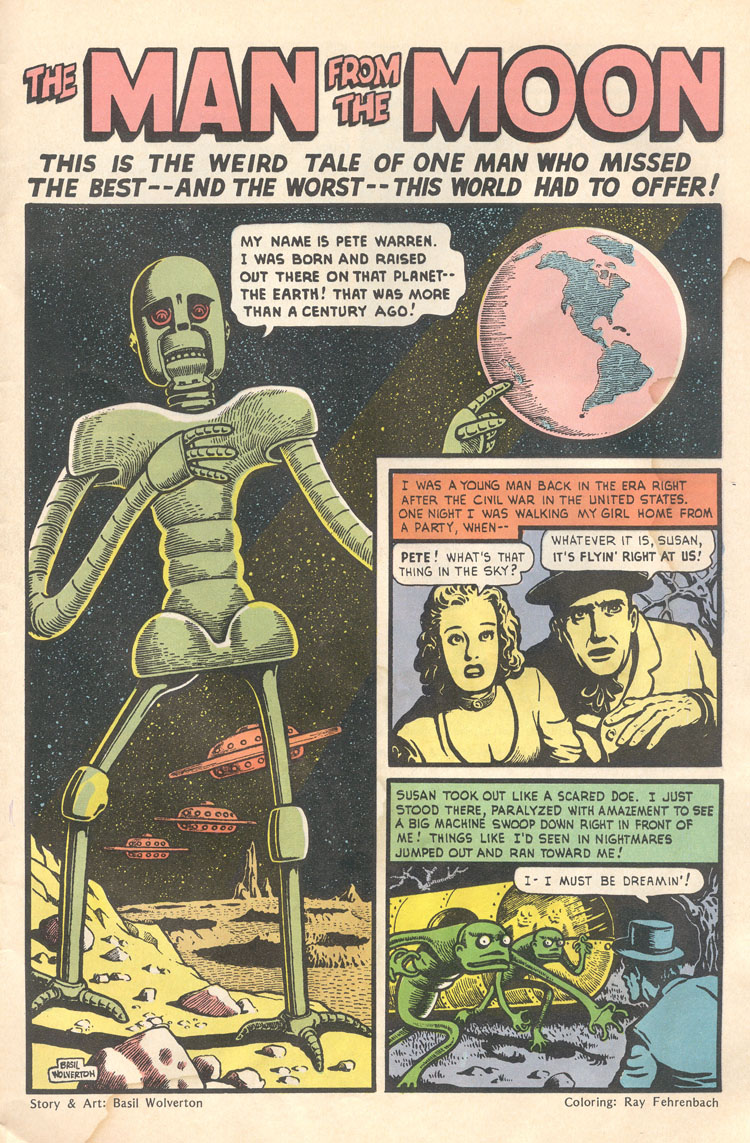 The stories are full of the strange forthright yet outdated charm of 1950's U.S. sci-fi. Maybe the best example of such writing. Heroes using 1950 slang even though it's 3010, absurd ( in retrospect) ideas of what technology would be , look like, and why... but at it's core very interesting, compelling and f*cking fun. Sometime even a bit sad. 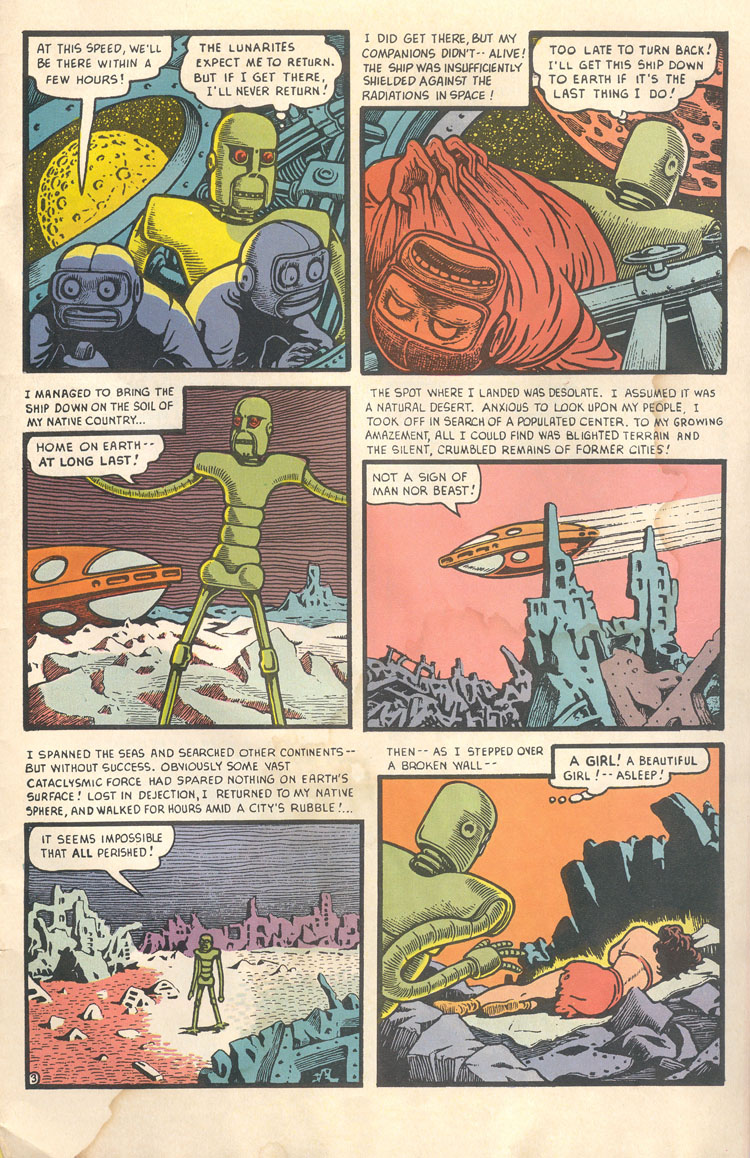 Like I said, this stuff has been reprinted a lot. Maybe even too many times for me to give you titles to track down. If you try your local comic books store it might help to tell them that IDW Publishing is probably the most recent guys to make a good collection of his stuff. Dark Horse Comics also reprinted single issue a while back.

But you can look around for yourself ( what else is there to do, eh?) searches of Basil Wolverton, Weird Tales of the Future, and Basil Wolverton Horror will send you down the rabbit hole. 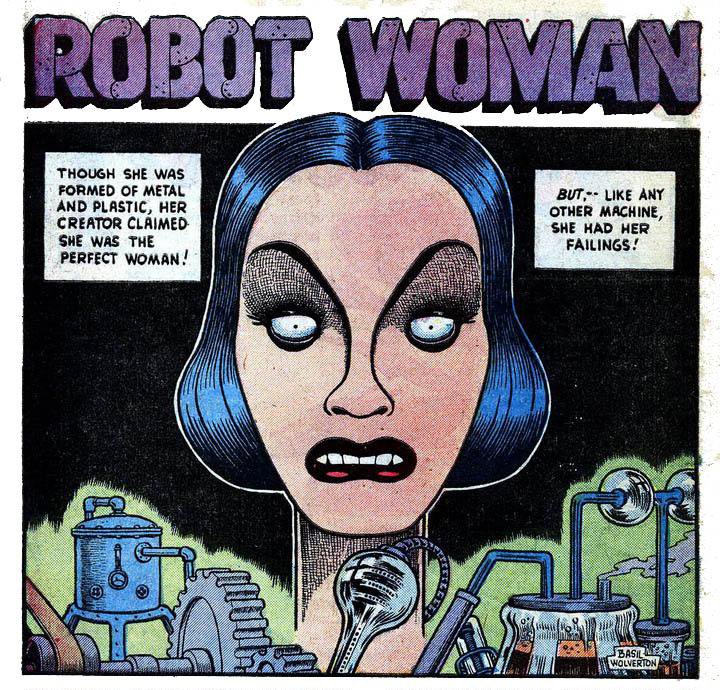 Some of the collections or single issues you find may have his work combined with stories from other guys from the era. And that's a good thing. It was perhaps comics' greatest era of horror and sci-fi and you won't get a bad one in the bunch.

Basil Wolverton is great. I have from time to time entertained myself with superheroes, but I never was overly interested in the genre. The American Horror comics on the other hand I always liked. In Denmark they were published much later than the anti-comics moral panic in the fifties. In the magazines I read The Crypt-Keeper from Tales from the crypt had his name retranslated into, Cousin Maggot.

happy birthday, huh? an upvote would have been nice. Oh...I see here, if I vote for you I get an upvote. so...you're using you wealth to get power over the blockchain. Gee whiz that sounds like what Sun did doesn't it.

Yes, happy birthday @arseniclullaby🙂 2 years being around is a great reason to celebrate! So cheers to you 🥂
I checked your blog and see you are doing great! - why so bitter my friend? I don't think what we do is in any way comparable to Sun. We do a lot of hours of work every day for the community without any payment whatsoever. If people want to support that they can, if not, they don't have to. Anyone that engages with us get's an upvote - no difference between people that voted or didn't vote. If you don't want to get any notifications anymore just write the word "STOP" next time and we wount bother you anymore 🙂
We wish you a nice start of the week,
cheers,
@lizanomadsoul from hivebuzz team

I'm not bitter, I loathe bots, which is what you appeared to be. I also find it rude it make no mention of the content in the post you are replying to, and then lobby for a witness vote. Time and effort goes into a blog/post it is poor form to make no note of if when responding, and flies in the face of what this community is about.

Well we are not a bot @arseniclullaby! Here are real people behind the account 🙂 We don't mention the content of the post because with our notifications its more about you and your account. The achievements you did on the blockchain, which are reasons to celebrate 😉 Our goal is to motivate users to keep being active and we monitore the activities and other things like challenges and meetups so they can be proud of achieving something. We respect that you have another view of support for the community. As I said. Feel free to stop this notifications if you dont like what we do.
Cheers, liz

Why would I want you to cease commenting here? I'm finding your responses fascinating and educational, not only to myself but the entire creative community.

for example, you say-
"We don't mention the content of the post because with our notifications its more about you and your account. The achievements you did on the blockchain, which are reasons to celebrate"

I dare say none of us would have thought that our content and the quality of it was somehow separate from the "account" and it's "achievements". See, fools that we all are, we thought the content and it's quality is what caused whatever achievement we have accomplished here, be it crypto, followers, or longevity. I'm sure glad you let us know, that they are separate in your mind(s).
GOOD TO KNOW!

I am genuinely curious further, please do enlighten us all about what you said here- "We do a lot of hours of work every day for the community". What precisely do you do?

Look. If you want to know more about our project before you go out and evaluate projects/people/behaviours without further information, you are free to go to our account blog and check out the guide provided for everyone to see. Additionally, our proposal will be out within the next 2 days listing exactly what we do exactly, for what purpose, how long etc., no need to write it down for you here.

BTW, some could also think that doing a power down or cashing out HIVE is not the beneficial community thought we all aim to go to. But that's up to you to decide. - Seems like you don't feel good at this platform no matter what I say or do. Wish you a nice week.
Cheers, liz

You get more and more interesting the more you talk.

She seems to think that my benefit here to the community is how much hive I have/keep here. That's what we are dealing with here.

TWO YEARS I have been here giving world class professional level content and insight, that can be enjoyed, shared, and shared on other platforms to bring people here, as have many of you...and she's concerned about how much hive I have. You can't make this sh*t up.

I went to her page, as she suggested...this was her suggestion, her example of what they do for the community. You're gonna think I'm making this up, so I screen captured it. And no, I didn't cut anything off. that's all there is. soak it in. 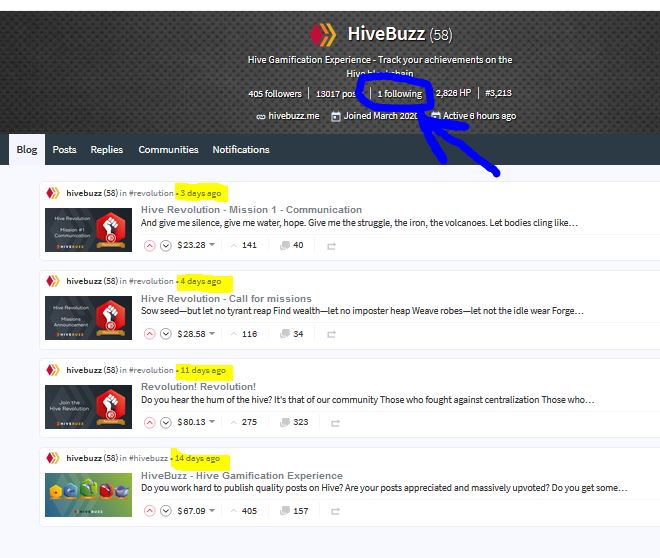 Following ONE person...a handful of posts, and all of them crypto block chain gibberish. that no average social media user would know nor care about. NO creative content, no sharing of any creative content.

Some arcane drive about handing out "badges" seems to be the focus. HEY...YOU...hardly anyone here even knows how to see their badges, knows what they are for and NO ONE on the outside looking in is going to give a rats ass. I see not one single solitary thing there that is going to bring in new people from outside of Hive.

But I do thank you for being a perfect example of the disconnect and lack of understanding of what makes something grow.