Bitcoin Dominance And Altseason | When is an altseason coming?

Bitcoin dominance is the bitcoin market share in the total market share of the crypto industry. At the moment of writing this Bitcoin is at 61.6% market dominance.

Historically there have been some movements in the BTC dominance (BTC.D) which indicates an altseason. Lets take a look at this and can we conclude where are we now. 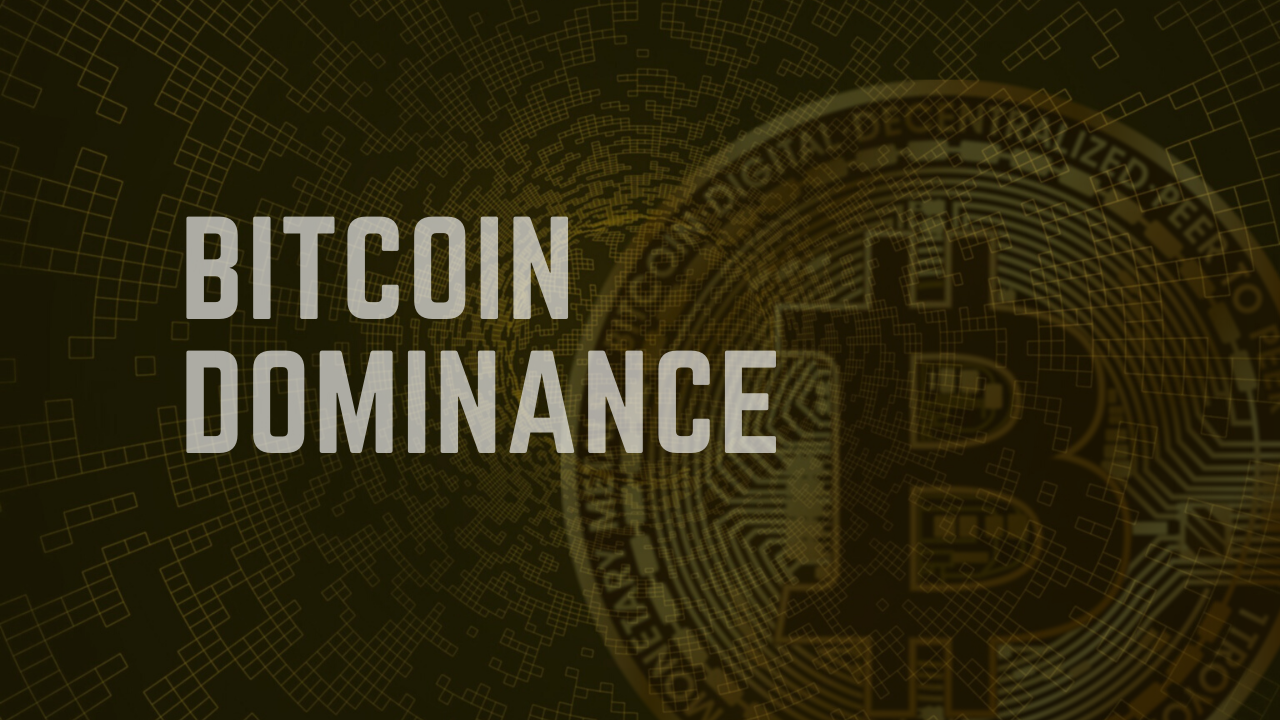 The old saying, history never repeats but it often rhymes, is something that is used when it comes to the crypto industry and its four years cycles that are happening around the bitcoin halvings.

We have seen this in terms of price, and it have shown a remarkable similar pattern as the last two halvings in 2017 and 2013 before.

Unlike the price chart of BTC and the halving events the BTC dominance indicator seems to have a bit shorter history as most of the last were not around before 2015 or even 2017. Most of the historical data is from the 2017 halving and afterwards. Before 2017 BTC is just to dominant with more than 90% share of the market.

Here are some charts about the Bitcoin dominance. 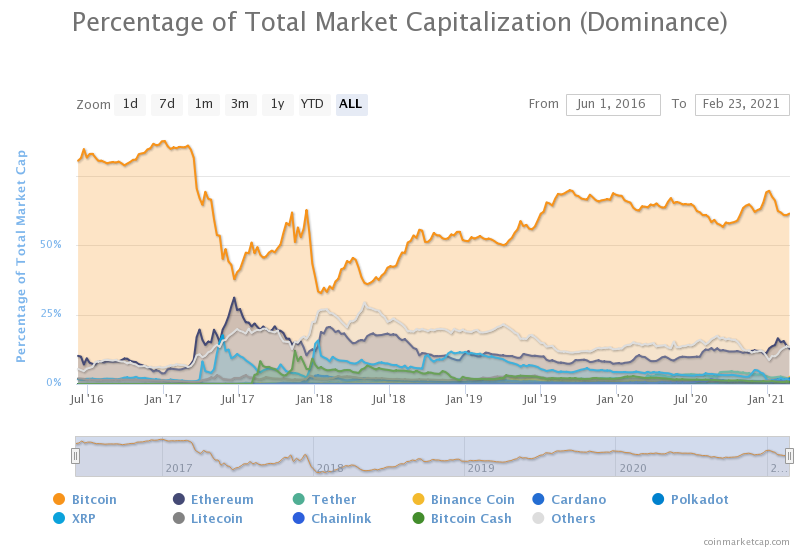 The above one is from coinmarketcap and it includes the other tokens as well, like Ethereum etc.

Let’s take a look at the more recent months.

The period in the chart is from Aug 2020 to Feb 2021.
In this period the crypto market was mostly in bullish phase. The interesting thing is that in most of the period above Bitcoin has been increasing its dominance except for the last two months.

At the beginning of the year the BTC dominance reached a critical levels of 72% market dominance.
Afterword’s it has dropped to 60%, and now is around 64%. Now remember at the peak of the previous bull market and the altseason, the BTC dominance was just 36%. If this is an indicator for altseason we haven’t entered one yet.

Here is another interesting chart when it comes to bitcoin dominance and altseason.

The chart above combines the two metrics:

For an altcoin season to happen you need a decreasing BTC dominance while the price of BTC keeps going up.

We want a BTC price that is going up and a decreasing bitcoin dominance at the same time. What this means is the alts will just outperform bitcoin in those conditions.

Where are we now?

If we take a look at 2017 in the period from July to November, the Bitcoin dominance kept increasing and growing. Then in December 2017 in a period of just two weeks a massive drop in the BTC dominance from around 70% to 36%.

In the last months we have seen bitcoin increasing in price and the bitcoin dominance increasing as well. This is the first chart from the photo above. This might be a similar pattern as the July-November 2017. If this is the case, we still have the mythical altseason just ahead of us.
Then if we take a look the volatility, it is much lower in the last months, in terms of the Bitcoin dominance, so there might be some more space for BTC dominance to go up again, before the alts catch up.

If 2017 plays out in a similar way in 2021 in terms of bitcoin dominance we might be on the verge of an altseason when BTC price goes up again in the next few months, or yet another leg for bitcoin, another drop and then an altseason probably later this year. Whatever the case is, judging from a 64% bitcoin market dominance, altseason is not even close to those 36% levels.

Will this mythical altseason happen at all this time? Maybe, maybe not. But in terms of price BTC has been acting a lot like in the previous cycles, so why not for the alts as well?

What is your opinion?

What I genuinely can't understand about Hive is its unpopularity! The same arguments are correctly wheeled out that its super-fast, super scaleable and has nice easy wallet addresses but yet...It constantly drives me insane to see the absolute, utility less shite coins that people are simply using for playing their trading games.

I truly hope @lordbutterfly gets his awesome marketing campaign funded and off the ground and then we can really show what this chain is about: Empowering people!

I guess it doesn’t help that Hive had a controversial start. It’s hard to get the word out if articles about it muddle the info we have out there.

I had already been following Ignite Visibility for some time and learned many things from their YouTube channel. I think they are a great fit. On top of that, I think a Brave Ad campaign would be beneficial too: https://leofinance.io/@vimukthi/how-usd333-33-of-marketing-helped-to-kick-off-37-2-pump-in-hive-price-in-the-age-of-censorship

Hive might surprise a lot of people in the long run :)
IMO it just need simple apps and easy onboarding .... soon

This analysis was fascinating.

I also believe bitcoin's dominance is a very relevant factor to gauge where we are in the bull market.

For alt coin season we need Noobs. The last alt season was primarily 50k traders on Poloniex trading maybe 30 coins. We have hundreds to go at now and its mainly Binance. Things have changed a lot and just the lack of a troll box alone is massively significant. Traders would egg each other into different coins, it was really just a game of chicken. Still when money flows it flows and it spills over. Nothing gets left behind i just hope we are still early in a year long frenzy.

I don't know, I still have a feeling this bull will be fundamentally different from the last cycle. BTC is exposed to a much wider, and wealthier audience than it was during late 2017.

Not to even mention all the shit that happened in this 4 years difference.

Alt's are going to have their 5 minutes of fame - we can rely on greed haha.

Need to play smart this time.

Things are different ... 100% ... I was expecting more stability in BTC this time, and yet it just went vertical ... kinda makes me believe the altsns will be just the same ... will find out in the next year :)

Ah those days back in 2017 when BTC dominance was down to 36-40% Sweet times and then Steem/Hive popped up to $6. Could do with some of that right now.

in a period of just two weeks a massive drop in the BTC dominance from around 70% to 36%.

Holy shit, I knew it was low but 36% is quite brutal haha.

This is just warm up :P

May the crypto Gods listen to you. Altseason please come to us, all over us.

The crypto gods are kind :)

This is an excellent post, very detailed and finely analyzed. Kudos.

We (HIVE) are at one of the top spots in terms of price decreasing - not sure, people would take this opportunity to buy and price will rebound. Everyone says their own opinion with a caution - anything can happen - let's see next few days will tell us, where we are headed.

A very interesting analysis. That would be really cool if we are not quite to alt season yet. The gains we are seeing have been nice for sure, but they haven't really felt like a huge breakout to me. Not what I am expecting. Like you said though, this time it could be very different. Who knows!

In the last 6 months BTC have never dropped below 50% market share ... so altsns not here yet :)

Hopefully it will be soon! :)

I'm eager to see how things pan out. Based on the data you present one can say that we've not reached an Altseason. However, given the gains I have seen in the past few weeks it will be interesting to see alts double those gains. I would like to see $hive go over its ATH of about $1 or so... That too will be interesting.

That would be something great certainly. Fingers crossed

The old saying, history never repeats but it often rhymes, is something that is used when it comes to the crypto industry and its four years cycles that are happening around the bitcoin halvings.

We have seen this in terms of price, and it have shown a remarkable similar pattern as the last two halvings in 2017 and 2013 before.

@dalz this says it all....you are actually right..well I also think that most altcoins tend to follow whatever Bitcoin does on the market and so I expect most altcoins to behave whichever way the Bitcoin is behaving on the crypto market ...

Nailed it, and I have to agree with you 100%. Alt season to come, but BTC dominance is still far to strong.

My only question is how will this year differ, because I believe each bull run has a few unique characteristics that come into play.

My guess would be a late surge and massive run up of DeFi coins once BTC dominance starts to slip. I have a feeling that a lot of DeFi tokens will be locked up further contributing to supply crunches on exchanges, which will exacerbate the situation ultimately accelerating the final alt climb and impeding implosion.

@dalz this BTC dominance info you are sharing is really important for new people in crypto to understand. I consider it essential starter info so people can spot the trends early and prepare accordingly. Great post dude.

My only question is how will this year differ, because I believe each bull run has a few unique characteristics that come into play.

Yes there will be some unique specs ... defi seems to be on a massive run ...

currently on a massive run, and it's not even alt season yet..

Hope you’re right. It gives everyone time to get a better position for altseason.

Thank you for the extra confirmation. It was all inevitable and I think DeFi will probably become the ICO equivalent during this altcoin season. This is why I'm a serious advocate for every DeFi project on HIVE. We need to get these things started by the time altcoin craze start.

Hoping Hive will experience a new ATH too. $8 maybe or even higher.