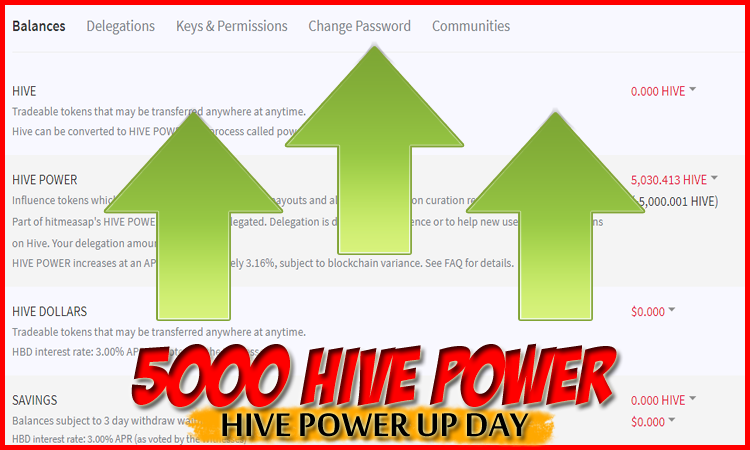 HBD sits at a whopping $2.5+ at the time I am writing this and that might be enough for some people to start powering down and cashing out. Hive is up to $0.81 and I talked about powering down one week ago. There was a lot of people jumping in talking about their behaviours, ideas and overall approach to Hive and even though I have powered up and staked all my earnings since then, I still have some thoughts of cashing out something, but there was a goal I wanted to reach before that..

I crossed 5K Hive Power today after powering up 61 HP and that was my first stepping stone. I am currently sitting at 5030 Hive Power and 3050 LEO Power, worth a total of $6700 USD at these current prices.

That's roughly 2 months salary or 70% of my total student debt which would obviously help med tremendously in real life, as I would reduce my monthly expenses a lot by paying off my student debts.

However, I will keep what I have because I want to grow my stakes even further. I believe in Hive & in LeoFinance, which is why I quickly upped my delegated to @leo.voter with another 100 HP to a total of 5000 Hive Power. That should give me a return of roughly 1.5 LEO per day, which I think is a decent chunk of tokens to get as a 100% passive income, and the truth is that I think that delegations to @leo.voter is far more than just getting good ROI.

That being said, I have started to play around with the idea of cashing out 20% of my rewards. That would basically mean that I would use the remaining 80% of my rewards to power up and grow my account, while I could cash out 10% of the rewards just to get something out of this bull run and the amazing prices we see today.. It would also give me 10% to invest into other cryptos. Nothing to brag about, but everything adds up over time. I still haven't decided though, but I think it's a decent idea.

I mentioned in my previous post that Hive & LeoFinance Is LIFE-CHANGING For HUNDREDS Of People, and with numbers like these, Hive & LeoFinance could actually become life-changing for me as well in a not so distant future..

Woohooo! I hit the same milestone today! My account, currently is worth around 3 months living for my husband and I. It would wipe out our debt if I powered down. I've decided not to. From this month, I might keep HBD liquid and cash some of that out. We'll see what this month holds. My preferred option would be to HODL for the moment.

I think (not giving financial advice) stash it as a nest egg...

Holding liquid HBD seems like a decent idea, especially at these times as the price seems to move a lot. Hopefully, you won't regret your decision. :)

You know, since I haven't spent actual money here, and I see the time I spend in the Hive as well spent, I don't think so. I may, when there is a little more, whip it out and put it in an exchange. That said, it does earn interest here. There it wouldn't. It's the kind of risk one takes with virtually any financial instrument, right?

It's the kind of risk one takes with virtually any financial instrument, right?

My congratulations. I hope my vote will also help to improve your financial situation a bit. Thank you for reminding me about HIVE POWER UP DAY

Thank you, I appreciate it. :)

i have delegated 4k on leo, i intend to increase that to 5k as well when i reach 6k on Hive!

Those are some awesome numbers. I can only imagine what my account would look like if I were as disciplined as you! I would like to delegate more to @leo.voter, but I have some delegations handed out to some new users that I onboarded. I want to help them grow before I worry about myself too much.

I can totally understand that and I used to have the same idea. I delegated my entire stake to others, or to an initiative I launched, just to spread the tokens far and wide and in an attempt to encourage people etc. However, I have realized that by delegating to leo.voter, I grow my own stake, help others to earn rewards and I also help LeoFinance in terms of claiming accounts for new users. So it's a win/win situation as I see it.

It definitely does sound like you have found a winner there!

Yeah, I don't know.. I guess most of us are striving towards the same goal. We just have different ways of getting there. :)

Life changing indeed! I sent my price money of a hive game called Nextcolony to a hive friend in Venezuela last year and he could buy seeds , plants, sugar, mais etc and feed his whole family and harvest a lot more afterwards.
IN some countries some hive and crypto in general means a lot.

That's awesome. I previously wrote about how 1 days worth of upvotes from the biggest Leo-whale could cover 2 months of supplies for a venezuelan. It's really cool and totally a life-changing oppportunity.