Several days back, Quidax Africa put out a poll on Twitter asking users to vote for the coin they wanted to listed next on their crypto exchange.

The contest can be seen here:

It was nice to see HIVE even included in the list with other crypto heavyweights such as BCH, EOS, and Dash.

Anyways, today the results are in and it was all HIVE.

Despite a mad dash (pun intended) by the BCH crew, HIVE was able to hang on and win the poll by capturing roughly 47% of the 850 total votes. 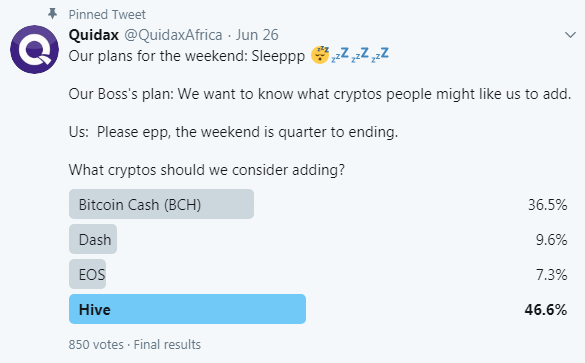 There is no guarantee that winning this poll necessarily ensures they will choose to list HIVE, but I would guess this is a pretty good indicator that they will.

Will keep you updated, when/if they decide to list HIVE on the Quidax exchange.

There is another opportunity to get one of our coins listed on an exchange by stepping up our Twitter game...

And this is a major exchange...

We were all very happy to see LEO listed on Probit, but this would truly be a game changer for LEO...

Get it listed on Binance!

All you gotta do is go to that tweet and request LEO be added and then make sure to state why you think it should be added.

In my opinion, saying it is one of the few projects in all of crypto that is actually generating revenue (that's not coming from transaction fees) is a pretty strong selling point.

The more exchange listings the merrier!

Really nice that we won.

Little by little, we are gaining.

It is good to see another exchange added to the mix. No matter how big or small, we are adding many.

I agree, it is time to try and get some H-E tokens listed on exchanges.

Any chance we could implement the LEO model of using ad revenue to burn LEO on the open markets on hive.blog and HIVE?

Isn't there another altcoin going by LEO?

Yes, hopefully there are many more come.

But how does this help Hive?

It opens up HIVE to more countries and ultimately more people. Most exchanges are limited in to certain jurisdictions. Making sure you have exchanges in every jurisdiction is extremely helpful for growth.

Nice one, glad we got the listing and don’t need to pay for it or have people claim they did it and wanting all the glory lol!

glad we got the listing and don’t need to pay for it or have people claim they did it and wanting all the glory lol!

Ha yes that is always nice. The more FREE listings the better!