MicroStrategy to buy another $600 Million in Bitcoin!

jrcornel (81)in LeoFinance • 2 months ago

I think it's safe to say that Michael Saylor has decided he is going to single handily push the price of bitcoin over $100k this year.

After several big buys of bitcoin, the company announced they are going to do yet another $600 million convertible debt offering to buy even more.

The official announcement can be seen here: 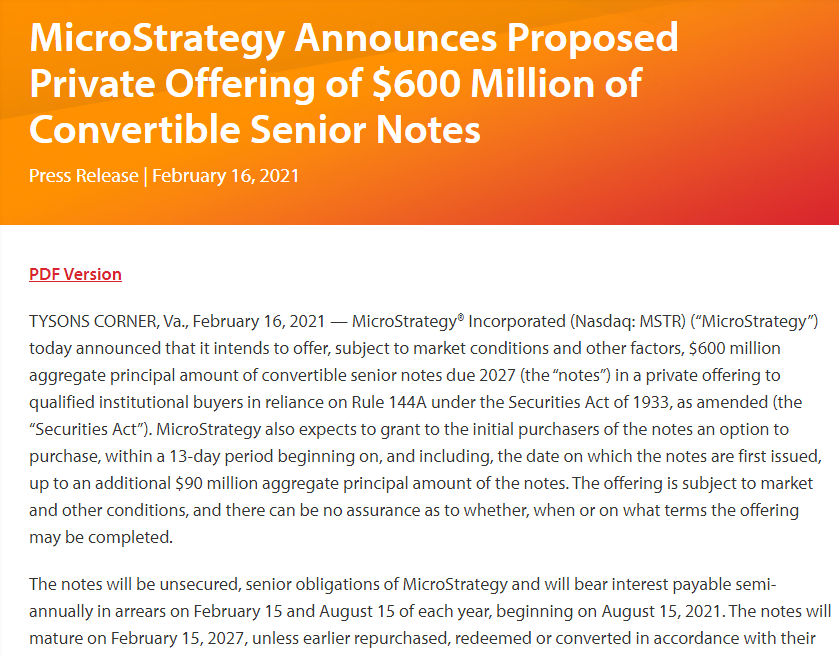 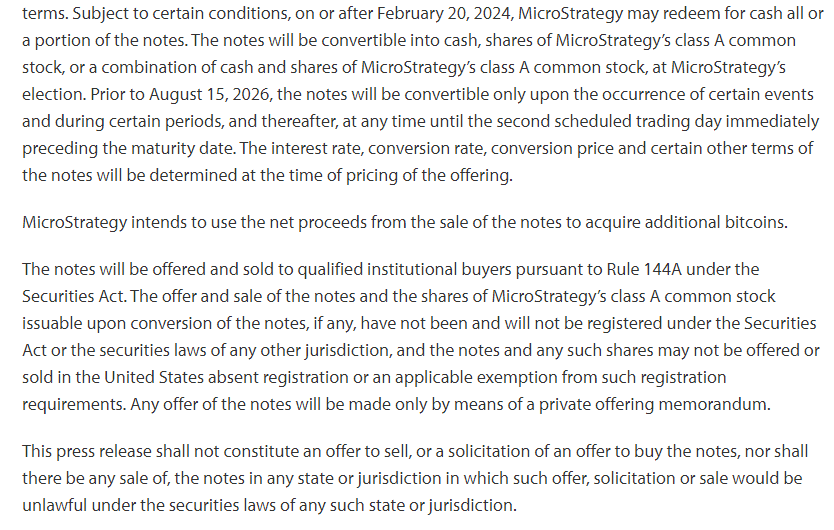 This is in addition the the $650 million convertible debt offering MicroStrategy completed several months back.

The buyer of last resort...

If you are wondering who the big buyers are going to be that come in at these $50k levels and keep pushing the price higher, the answer is, these guys.

A timeline of their bitcoin purchases can be seen here:

They are using pretty much all the cash on their balance sheet, the free cash flow generated by the company, and plus they are doing debt offerings to get even more bitcoin.

This is a perfect example of continuing to do something as long as it keeps working.

Their stock has gone up more than the price of bitcoin over the last couple months so they have been handsomely rewarded for their risk.

It will be interesting to see how much shareholders will continue to support moves like this as it will eventually become a major liability should bitcoin plummet at some point.

Though, if I know Michael, if it plummeted he would raise $2 trillion to buy it on the dip.

Bitcoin is going to keep going higher, institutions are in control now.

An unlikely hero for a bunch of anti establishment freaks... You gotta love the irony.

The cypher punks, anarchists, nerds, and libertarians all find common ground in bitcoin!

the positive news for Bitcoin continues day by day... thanks for keeping us updating

It sure does. It's a fun time to be in crypto again.

its just insane not only are these guys buying such huge amounts at really high prices but they are also announcing ahead of time. It shows how much confidence they have in Bitcoin.

@jphamer1 life itself is risk and to become great in this life then one must learn how to be willing to take risks...no guts no glory...

I agree with you that those guys really have guts and confidence and investing 600million dollars on the Bitcoin market is another great news concerning Bitcoin and that will pump the price up again ...

Seriously. People are front running their buy... and they don't even care.

That is just nuts! It is amazing the amount of money that is flowing into this space. My wife shared an article with me the other day because it had to do with crypto currency so she thought I would be interested. It was something about a statement Mark Cuban had said. After the fact she was asking me what his credentials were and if he really knew what he was talking about. I was like yeah, he is pretty legit. I guess what I am saying is it is awesome to finally see these big names speaking positive about crypto.

This is a huge risk of his bitcoin bets don't turn out, but if they do, he's quickly climbing the ranks of richest people in the world.

There will likely be a lot of people burned now if BTC doesn't pan out.