Publicly traded companies are going to push Bitcoin to new all time highs!

It turns out the list of publicly traded companies with some form of bitcoin exposure is quite a bit longer than I expected...

I put out a post earlier today talking about how there is at least 10 different publicly traded companies currently invested in bitcoin.

The total thought to be amounting to about $6 billion dollars.

However, it turns out there is actually quite a bit more than 10 publicly traded companies with some form of bitcoin exposure.

In my defense I did say "at least 10" meaning it was likely more than that.

That being said, I didn't realize there were this many... 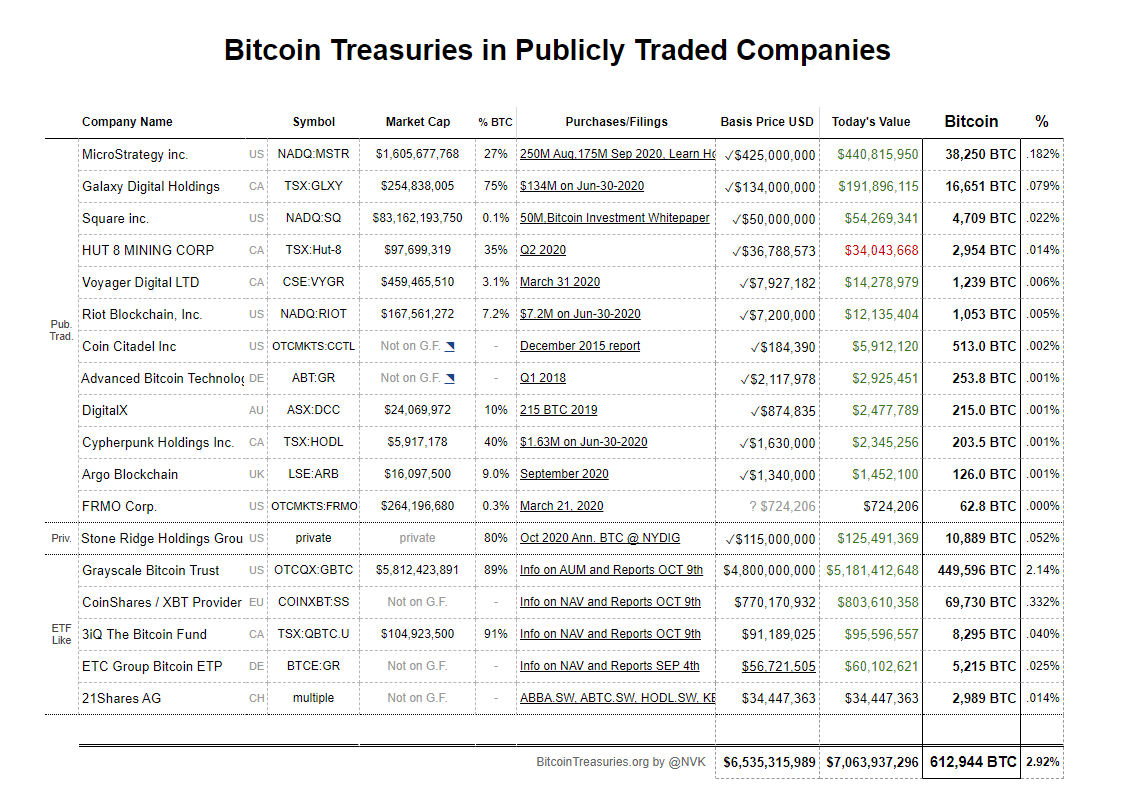 Like I mentioned in the previous post, I never expected publicly traded companies to be buyers of bitcoin.

It was something I just didn't really consider, though now it makes a ton of sense for them to do so.

When you combine that amount of money currently sitting on publicly traded corporate balance sheets, which is said be north of $7 trillion, with the massive stimulus plan that is coming down the pipeline combined with continued debasement of the dollar as well as the past post halving trends and we have everything we need for a massive explosion in the price of bitcoin.

Past post halving patterns are calling for something in the $250k-$400k range by the end of next year.

We even have some crazy analysts calling for $1 million bitcoin, though most of those predictions are after the next halving in the 2025 area... except for McAfee who owes everyone some schlong eating.

Either way, with everything bitcoin has going for it right now, I am finding it hard to believe bitcoin doesn't make new highs next year (or end of this year) and possibly blow those old highs out of the water.

Wow.There are four Canadian companies in there. I have to find them on TSX and do proper research.

They will make it harder for regular Joe
to get in.
Hope it is not too late at $11k to get some.

Yep, my guess is that bitcoin will probably never go below $10k again because all these institutions are buying at that level, which means they will probably protect that price point.

This is what I’m paying most attention to because it’s gonna be hard to convince all the casual investors to come back into bitcoin after 2018 but those who have a ton of money to invest have to think seriously about where to put their money and act less emotionally. Who will be next?