Everyone talks a $100k Bitcoin price, but it appears the vast majority don't think it is actually going to happen any time soon...

In a poll put out by PlanB on Twitter, it appears the vast majority of people are expecting a much more conservative price target for bitcoin by the end of next year.

Well, about half the price many have thrown out there...

As you can see the peak expectation for BTC over the next 18 months is something less than $55k.

Which is about half the $100k number that the stock to flow model anticipates and a lot of crypto analysts have thrown out over the last couple years as a real possibility.

As you know, polls can say a lot of things depending on the sample size and the participants in the sample.

In this case though, I think the poll is a pretty good representation of what people are thinking.

It had 27k participants and PlanB is followed by a lot of crypto investors, analysts, money managers, and financial advisors in the crypto space.

Those participating likely represented a large and diverse segment of the crypto community.

And for those reasons I think the results are an indication of what the crypto community feels is realistic for the price of BTC by the end of next year. 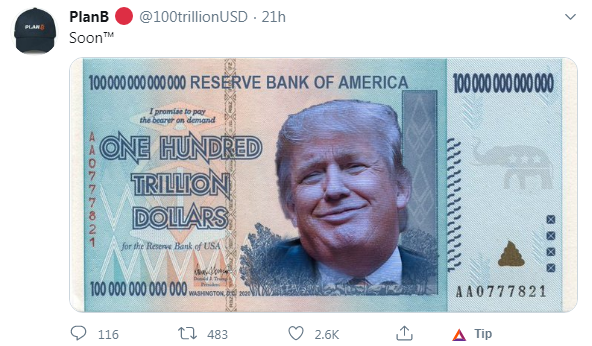 That being said, I still think we are going to see $100k by the end of next year.

Bitcoin has every macro tail wind you could ask for apart from it being declared as a national currency by a large country.

We are just about to embark on another round of stimulus as the first round is already starting to run out and the pandemic is long from over.

The good news is that we only have 18 months to wait in order to find out whether it happens or not.

The other good news is that if the price never goes over $55k before the end of next year, that would still represent a 6x return if it got to that level within the next 18 months.

Either way, we should be pretty happy by the end of 2021.

I believe the price might remain at the same level range that we are presently.

If it does so, it would be the first time it didn't rise post halving, ever.

Even with a halving? With the rise of the DeFi?

Yes, it is mostly speculation, the majority are too greedy in this space and focus just on the money side instead of mainstream usage.

Whenever this discussion arises — what's BTC going to rise to? — I find myself backing up and pondering the fact that we start talking about an asset rising 10-fold (or more) in value.

But to what extent is that a realistic consideration for an asset that — at the same time — gets tossed into the hedge and store of value category, like precious metals. There isn't much talk about "gold is going to go to $500,000 by the end of 2021!"

Forgetting finances, lambo dreams and insane runups on various tokens in the past... can we really reconcile "store of value" with wild price fluctuations? Or are we looking for BTC to do something that's contextually dubious?

The reason gold is not talked about as potentially rising to insane numbers is because the s2f ratio of gold is pretty much constant. It has no mining reward halving. The halving is the engine that powers this entire space.

Bingo. The halving is the catalyst. Simple supply and demand.

Hahaha. That was true. I have a cousin brother who actually do not believe in cryptocurrency at all. He is an educated person but nope. He won't believe in Bitcoins, Hive , HBD and the rest. You are very right my friend @jrcornel. Happy to meet you sir.

I'm not too concerned with the when, I think the further out it is the more we have time to prepare and transition

It depends on what the stock market does, sad to say.

Markets newer do what the people think they'll do )

Ha, great point. If everyone doesn't think it will actually happen, it has a higher chance of happening than if everyone thinks it will, within reason of course.