We are heading towards the next hard fork on Hive. This is going to be the first one in a year.

Many are not looking forward to this since it is not feature rich from a user standpoint. That does not mean it is not important. A few of the changes are vital to how things operate.

One of the Resource Credit delegation which will allow users to operate on chain without having to be delegated Hive Power. This is going to be a huge shift for the applications.

At the same time, we are seeing the One-Block Irreversibility (OBI), which will give Hive some of the fastest settlement times in the world.

Both of these offer possibilities that could appeal to developers.

There is something else that is going live at the same time which is a real game changer: Hive Application Framework.

For those who are not technical, this might seem like something to ignore. However, if you hold any Hive Power at all, this should be of interest to you. The reason is simple: it is a game changer.

Blockchain coding is not easy. It requires a special type of developers to be able to do it. Thus, interacting with blockchains via applications is a difficult task. Ask any project team that is building platforms the challenge in finding developers. HAF is going to make this a lot easier.

HAF is a framework that allows developers to create in their own languages. It essentially allows the data to be pulled from the blockchain without having to interact directly with the blockchain. Databases are created and stored at the HAF level, completely bypassing the blockchain (for the developers perspective).

Of course, HAF is tied into the Hive blockchain and requires constant updating. Here is where the experts step in. Those who understand blockchain handle all the updates. If a fork takes place, HAF is brought up to speed, leaving the applications in full operation.

Here is a quick diagram showing it. 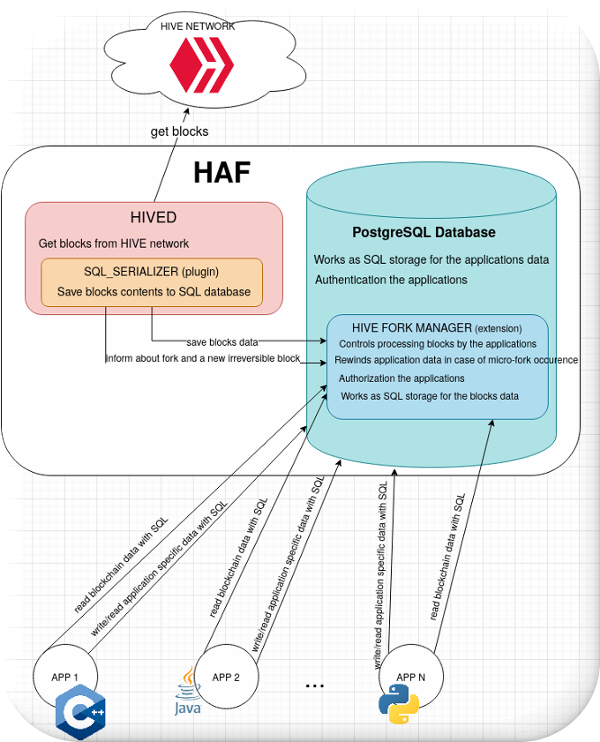 Notice the applications at the bottom are written in different languages. This is one of the keys. HAF allows developers to code in JAVA, Python, or whatever they are comfortable with. There is no C++ or specialized language (Solidity) to learn.

Therefore, while the discussion is always on attracting more users, HAF is designed to bring more developers to Hive.

Keep in mind there is rather unique in the blockchain world.

To get a full overview, one can revisit this HAF introductory post.

HAF is going to make Web 3.0 development as simple as creating a website. Any developer that is experienced with using databases, which all are, will suddenly be able to build on Hive.

This expands the potential pool of developers exponentially.

One of the keys is that HAF allows for the construction of a smart contract platform. This becomes important since so many are interested in tokenization. Hive often talks about "tokenized communities". Here we see the where the infrastructure could be built to generate tokens quickly and inexpensively.

Another factor to consider is the security element. A lot of attention is given to hacks and the money that is drained during them. Let us make be clear, hackers are professionals. They understand the programming language better than most using it.

Where this becomes a problem is flaws in the software. When one used Solidity for a few months, it is logical that the lack of experience will lead to some issues. Here is where a hacker can find the vulnerability. Simple ignorance accounts for many of the hackable moments.

This all changes when one is using the same language for the last 10 years (or more). While we could still see hacks, those due to mistakes should be drastically reduced. Also, it is far easier to find someone to review JAVA code as compared to Solidity. Again, there are simply more people who are intimately familiar with the code.

Therefore, we could potentially see integration of Web 3.0 features into websites at a rapid pace. If HAF is filled with pre-existing data structures that developers need, it cuts down on the time significantly. Since everyone is drawing from the same data on the blockchain, the only difference is breaking it down into what individual developers feel is important.

Hive: The Blockchain That Can

We know how useful fast and fee-less is when conducting transactions. For non-financial applications, this is essential. Of course, up to this point, few looked at Hive to build on.

HAF could change all this. While the huge players still could gravitate towards the likes of Ethereum, Hive could attract developers who are seeking to create utility. It is one thing to make a bunch of money, it is a different matter to get your application or game used.

With Ethereum, we now it is an epicenter for money. The utility of what is built on there is spotty due to the fees. This is an important factor to consider going forward.

This industry is still young. We are still at the point where basic infrastructure is being built. HAF is a piece in the long-term puzzle of Hive.

If the blockchain world is digital real estate, then Hive is creating something very valuable. The base layer along with HAF could put it on par with many other ecosystems out there. In fact, from a technical standpoint, there could be some superiority to Hive.

The next challenge will be making developers aware of it. We will likely see HAF go live the end of July, coinciding with Hard Fork 26.

From there, we will have another piece in the arsenal for developing Web 3.0.

This is interesting. The truth is I never knew it's possible to get RC without delegating Hive Power. I think separating the both is totally amazing. I think inasmuch as much attention wouldn't be paid to this HF. it's one to be excited about.

The truth is I never knew it's possible to get RC without delegating Hive Power.

It isnt yet. But it will be after the next hard fork since that is coded in.

Well, technically I would think that's illogical if you tell me that in the first place. This is exciting

It's great thing to be able to attract developers on the Hive ecosystem with this framework. Developers are the Builders and create the apps that will attract more users into the platform.

Without a doubt. This is vital to what we have going forward. Developers are key and hopefully this will simply the building on Hive.

From what I understand, anyone with the ability to code in Java or Python will be able to build on Hive.

Many are not looking forward to this since it is not feature rich from a user standpoint. That does not mean it is not important.

I think this upcoming hard fork will be looked back on in years as one of Hive's most significant updates (assuming no bugs, knock on wood). RC delegation is awesome, but even more exciting is HAF for its long term implications for this blockchain.

So, the HAF will be like an ever-updating database like SQL which mirrors the Hive Blockchain? It sounds like a great idea but will this be just for pulling historic Data like posts and stuff or will it be fast enough for developers to get a true state of the blockchain including transactions?
I am sure being able to develop in their familiar language will be so much easier.

I think HAF is a brilliant idea to allow a much wider range of developers to code against HIVE.

Also, there was mention that HAF would also offer a slimmed down version of a full node, but I didn't see it mentioned in this fork. That would be ideal.. stats on everything except post content, and retrieve the content off the chain vs the database. They mention hafah, which kinda sounds like it, but not.. I'm a little confused there.

Regardless, I love the direction HIVE is taking on so many fronts.

Always good to see developments on Hive, form the upcoming HF having a new user able to interact with the chain without HP is a huge step for mass onboarding.

Interested to see what comes of it and how it effects current projects and how much attention it gets for future projects. Resource delegation is going to be super interesting.

One of the Resource Credit delegation which will allow users to operate on chain without having to be delegated Hive Power. This is going to be a huge shift for the applications.

This really a great development especially on RC,obviously it going to make hive more easier for any one and I think virtually all the features mention are important,sometimes it is the little things that matters most.so am glad that hive is already putting this features in

RC are valuable assets and the development towards it would create more user friendly base to the platform and much of that is true that it takes very limited time in the basic transaction process and certainly the technologies are doing very good to make that work and keep the progress buton on., 👍

One of the Resource Credit delegation which will allow users to operate on chain without having to be delegated Hive Power. This is going to be a huge shift for the applications.— this will be a great implementation and improvement to the hive platform, a nice upgrade if you ask me . With this new users can carry on their activities without any form of restraint .

I’m very excited about the next hard fork. I agree there isn’t much coming with it that is of particular use to me, personally, but I understand the importance of what’s laid out above. Is this HF also bringing Hive Bonds into the mix or is that still down the road?

I think it makes a difference to all of us as any development is a step forward. RC's were spoken about for some time and the ability to delegate or rent out possibly at some point is great.

It's going to be interesting to see how much easier it will be for applications to join Hive with this new framework. I believe there were a few applications that didn't move over after the Terra incident because of how easy it was to migrate.

It is great that with the HAF, it will get easier to build on Hive which hopefully bring in more innovations and perhaps additional opportunities in this blockchain.

Nice follow-up to posts where you addressed Hive driving value through utility as well as importance of not obsessing over price. By reducing the development overhead, a whole host of applications should be spun up faster and innovation should take root in the fertile soll that is being made available. Seems like some exciting times ahead.