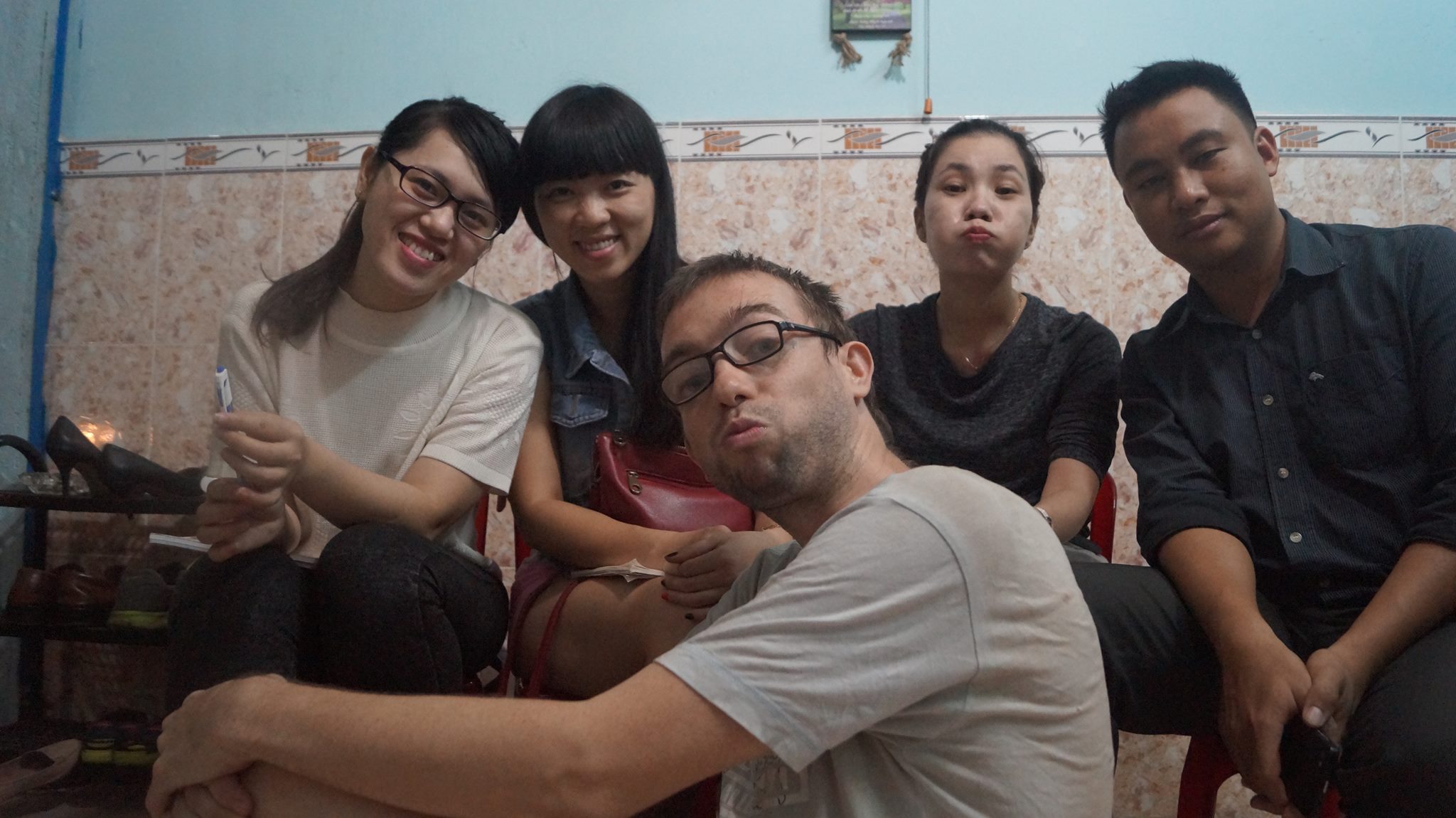 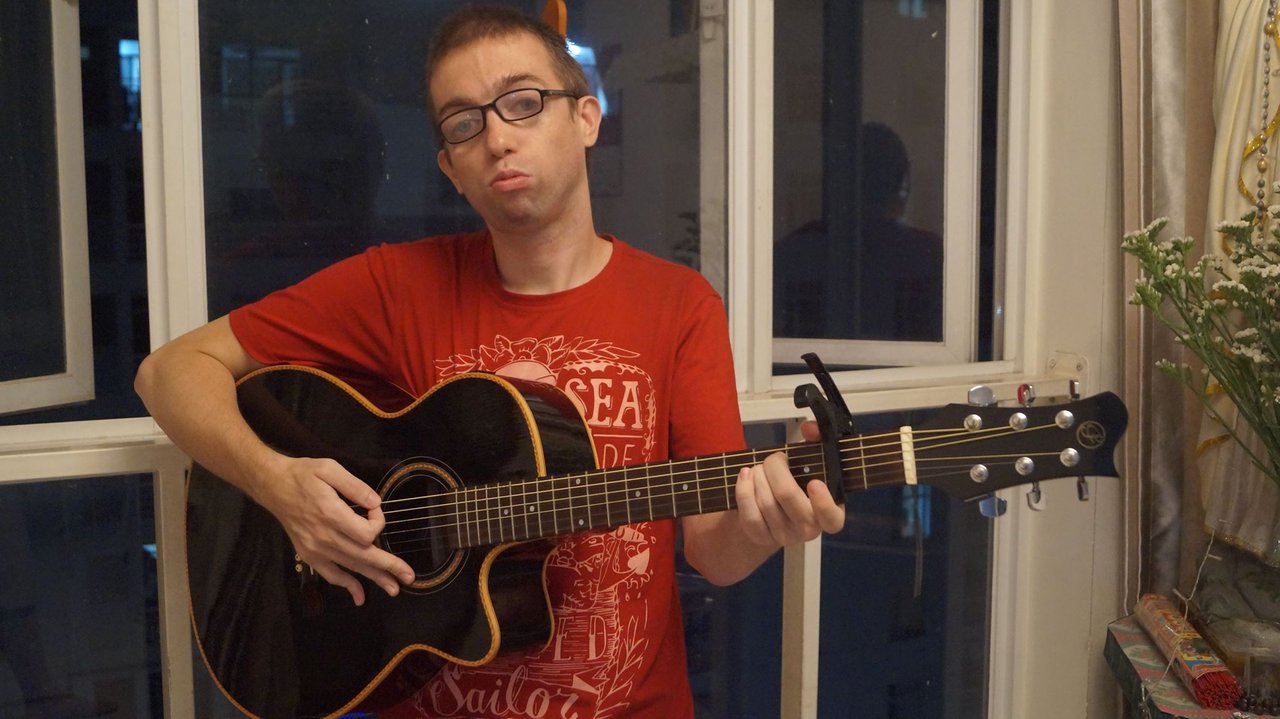 In District 7 at an apartment of my student

Was trying to extend my visa since December of 2015. I was teaching with FYG English. I would teach for free at the 23/9 park during my free time. Lego Mark was helping me with my phone. I tried many times to extend my visa via the help of different travel agencies, Rom, Anna Barbie, FYG, and others. I even went to the immigration department and they didn't say much. I was told that I might be on a blacklist, since December 2015 and yet they were not saying what kind of blacklist and why. Famous Hit Girl Video. Shower Question. District 7 Student. Tomkins. Hello. Great comments, Ron. Soren suggested I go into acting in Vietnam. 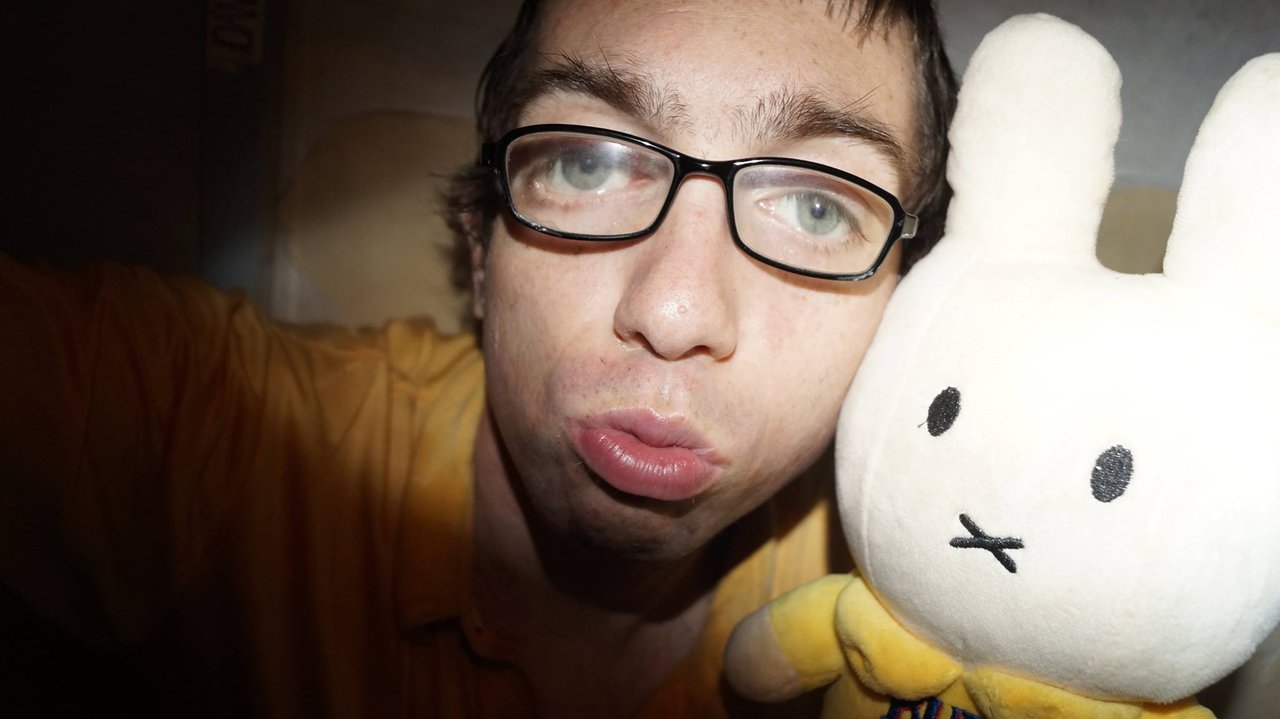 Began to stay at Hostel Anna Barbie. We continued trying to extend my visa. Anna English started around February 2016. We probably went to Dalat in February or March for Tet. People go home for Tet (New Years). Classes discontinues for a few weeks. Near the end of February, I begin being absent to FYG English, AAA Spa English, and possibly other classes mostly due to hostel policies. Anna's mom, Loan, said to me that she wanted to host me. But they had to sneak me in and out of the house as they lived across the street from cops and/or the friends of the police. That meant being unable to go to class. I ended up not saying anything to some of my classes until weeks or months later. I probably could have said something but I felt very uncertain for a bunch of reasons. Long story. More on that later. 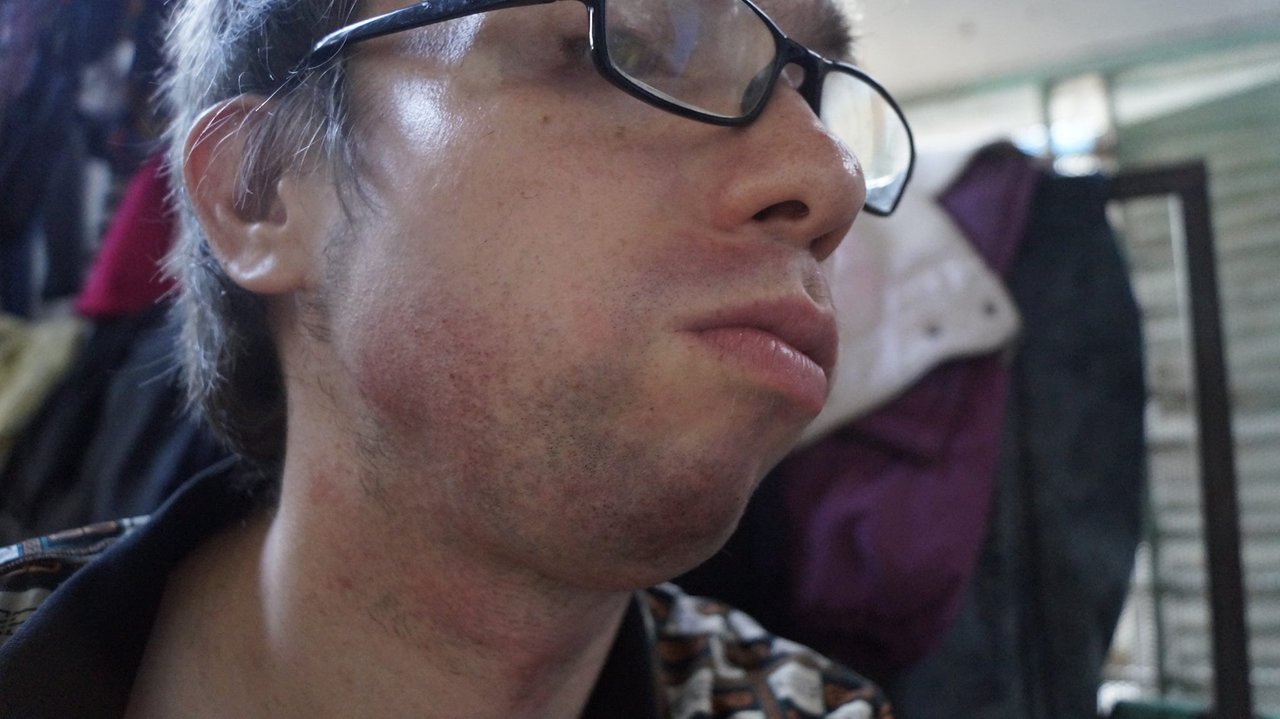 I was promoting Trump 2016 while living in Vietnam. I was trying to fix my visa. I was staying at the Anna Barbie Hostel. I taught with Anna English. I stopped teaching at FYG English and other places due to Anna Barbie Hostel Policies. As usual, was watching The Walking Dead on my laptop, weekly, generally. Was also watching Star Wars Rebels. I went with Anna's family to Dalat between like January and April. 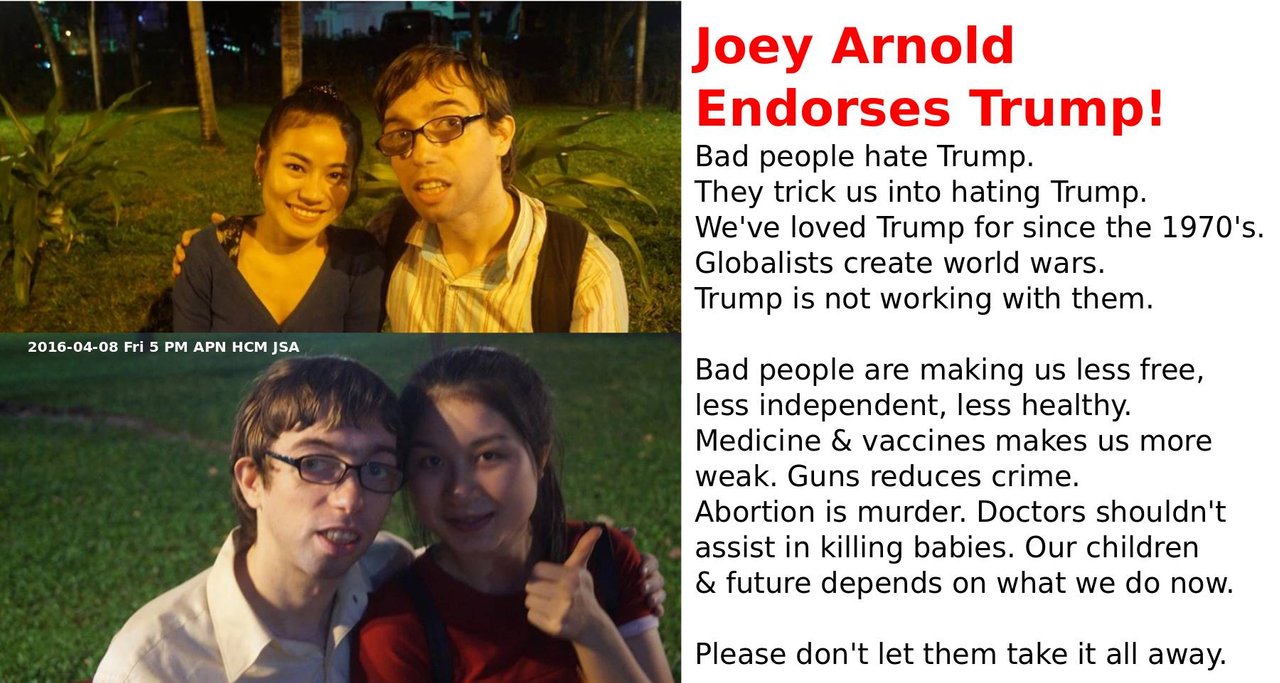 Anna English forked into Math English at McDonald's Dien Bien Phu and later at Nguyen Hue. My stay at Anna Hostel ended around the middle of April of 2016 I'm guessing. Purio English resumed. FYG English stopped around February or March of 2016. I was trying to fix my visa. I was still emailing family and others about my visa problem. There were debate threads on Facebook concerning me, Anna, her family, my visa problem, etc. I was probably not at the 23/9 park a lot after like January 2016. I eventually began teaching Bank English around April or maybe May. I went with Anna and her family to Dalat in like March or April. I was watching The Walking Dead, Star Wars Rebels, etc. 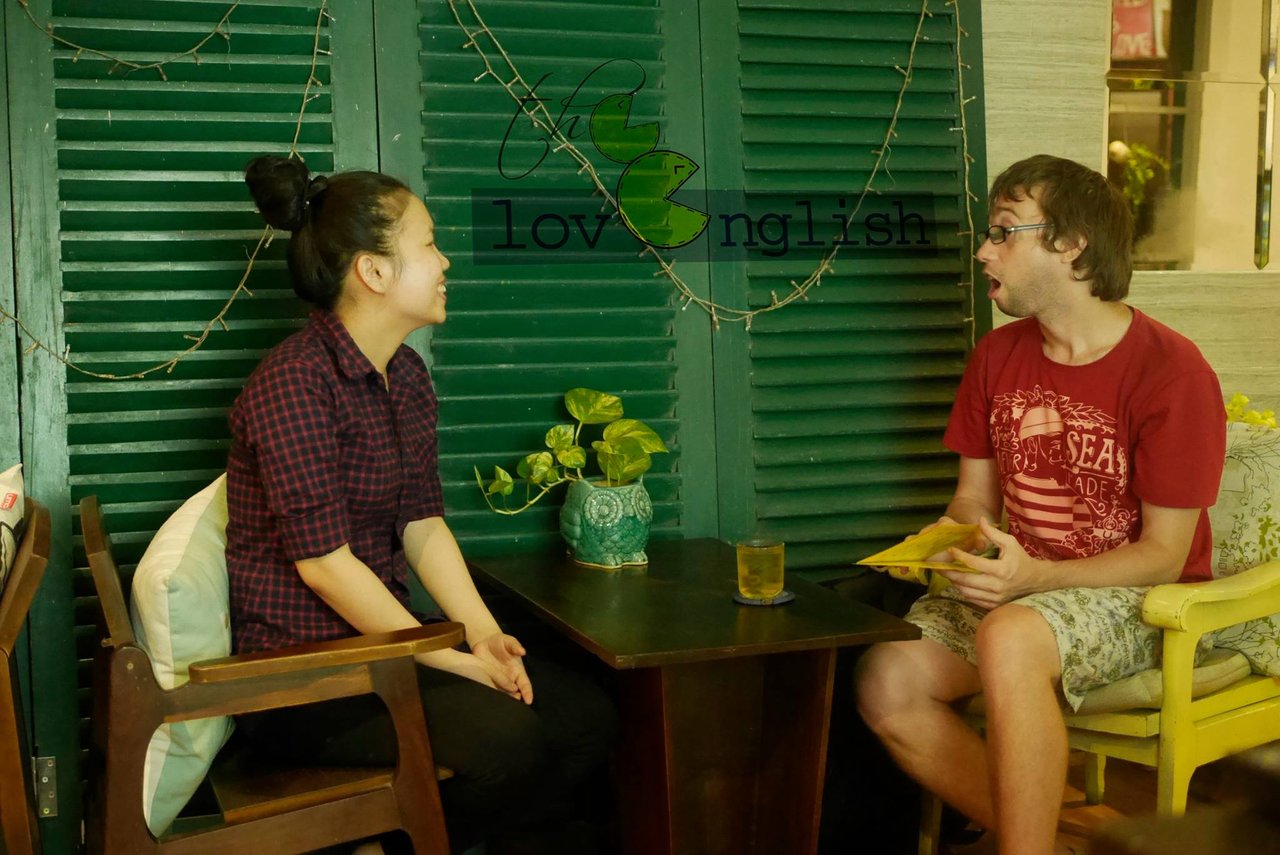 At Love English Club in District 3

Visited the Love English Club as seen in this picture | Girl14 English | Purio Coffee English | Cuong Architect English | Those were probably the main classes that I taught for during the month of May of 2016 | Was trying to extend my visa | Was homeless | Would eat and teach at places like McDonald's Nguyen Hue like on the weekend days, generally, and at Tous Les Jours during weekdays. At night, I was generally at Anh Coffee, all night. Other people would stay overnight as well. Other people were sleeping at cafes as well. | Romelus Saladar was encouraging me to visit The Love English as early as like maybe December of 2015. So, this photo is of me talking to a Vietnamese girl who said she was like a VUS teacher assistant. This photo was posted to their Facebook at 05:00 AM PST, Thursday, the 19th of May, 2016. | Online, I was promoting Trump 2016. 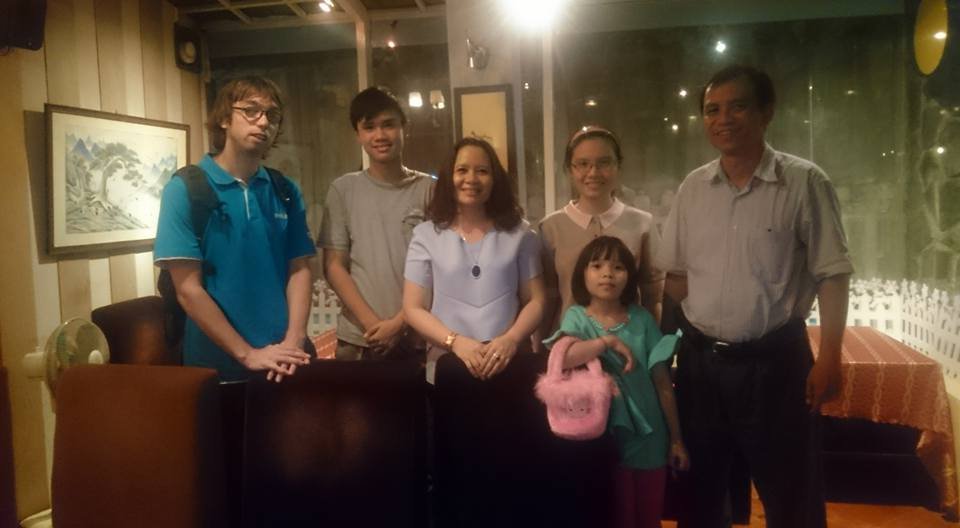 On the 25th, I said Trump would become the next U.S. President. I was telling people that Barbie Anna had my things. Eventually, I got some of my DVDs, etc, back. She kept this English book. I also left things at FYG English that same year in 2016 | I was still trying to fix my visa and find a room | Duyen Tran English | Girl14 English | Purio Coffee English | Architect Cuong English. 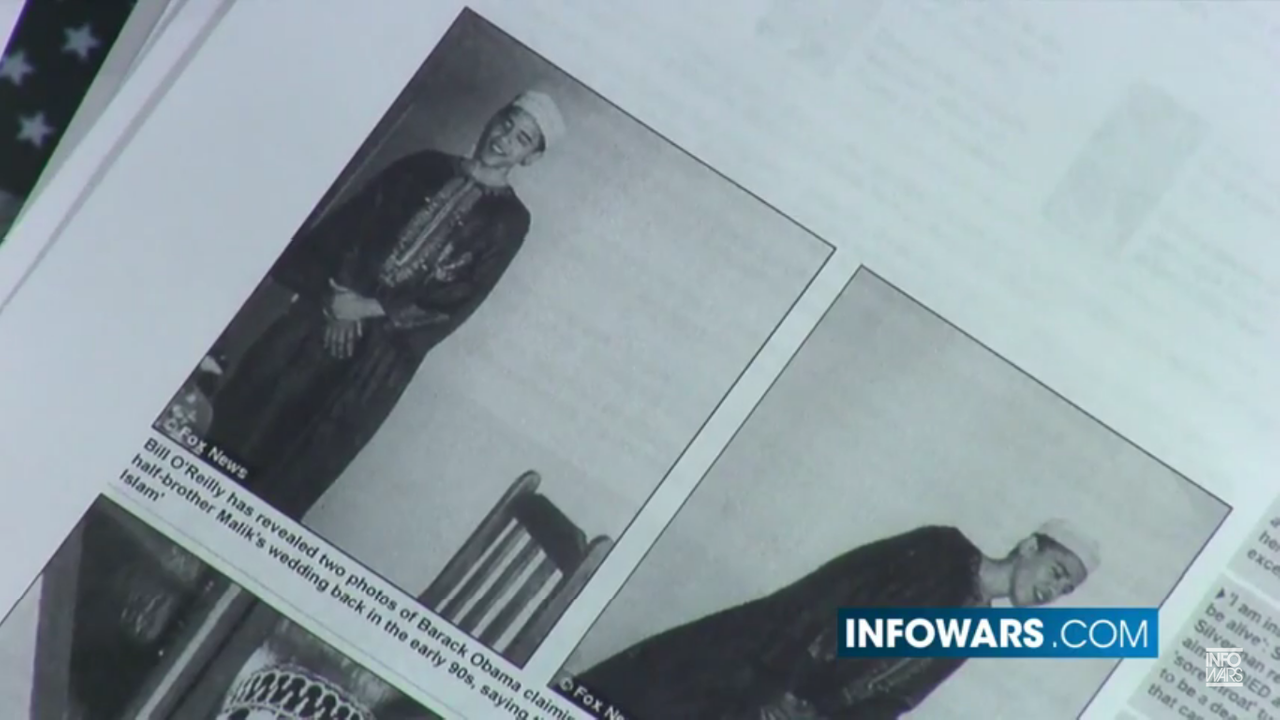 Zootopia | Girl14 English | Purio English | Clinton Email Gate | Muslim Obama Pictures | Tech Cartel Censorship | Clinton Body Bag | I was researching my dad's side of the family, surname Rasp | Visa Gate | Rasp Family Timeline | Blocked Ted Pickett | Hillary Libya | Alex Jones Infowars | Trump 2016 | Islam | Soros | Bernie For Hillary | Childish Vietnamese | I didn't have enough money to make a visa at that point even while being offered, allegedly, a solution to my visa problem, allegedly | 2008 Democratic Debates | Gun Debate | I was teaching a few different classes as usual from April 2016 and through July, generally speaking, and my daily routine, the classes, the places where I would eat at, and everything, remained pretty consistent from April 2016 to the end of November 2017 at which I returned to America. 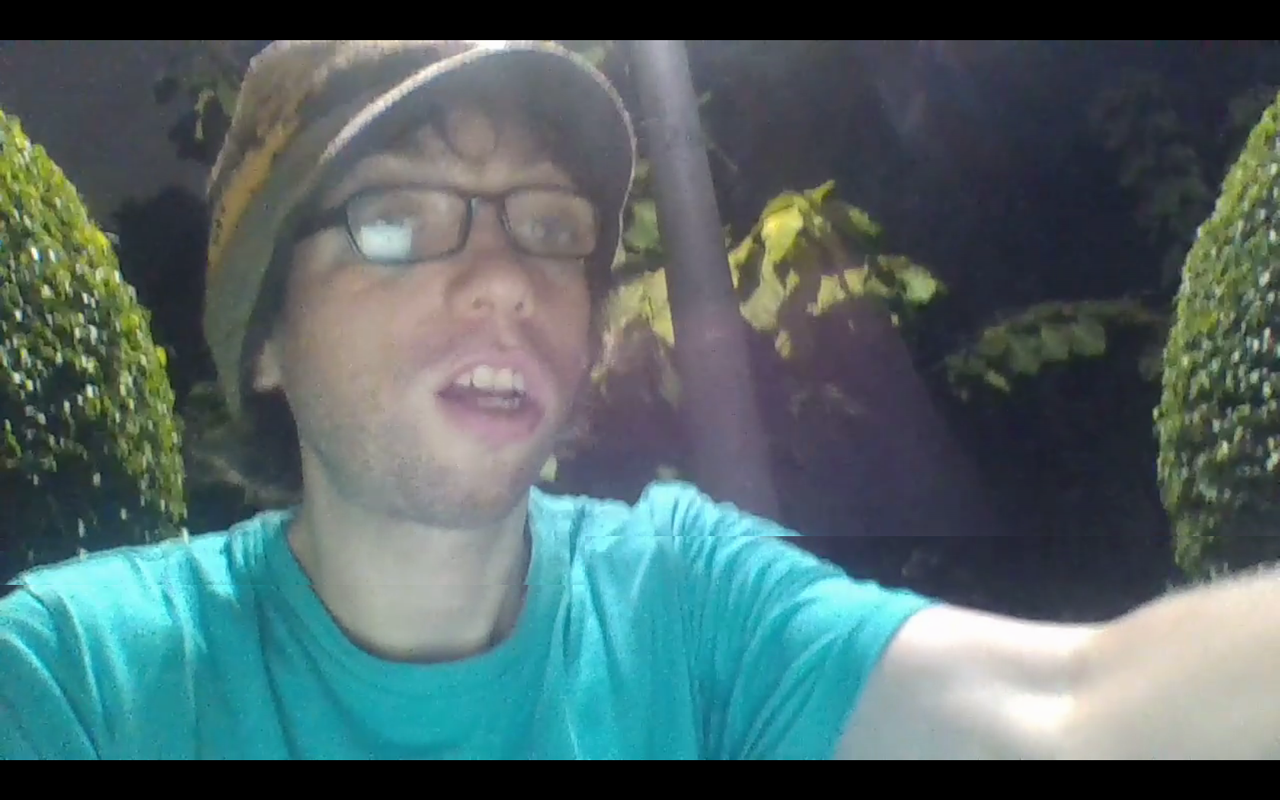 Bought a New Laptop | Before that, Lego Mark was helping me in my attempt to revive my older laptop which got fried from some hot coffee. | I can't remember if I ever got my old laptop fixed or not | I was still teaching different English classes as usual | Met a Young Lifer at the 23/9 Park | Math English Finale | Brain Phones | Life Bio | Childhood Pics | Bank English | Architect Chinh English | Politics at the Park | Facebook violated my Fair Use Rights | Irony Video 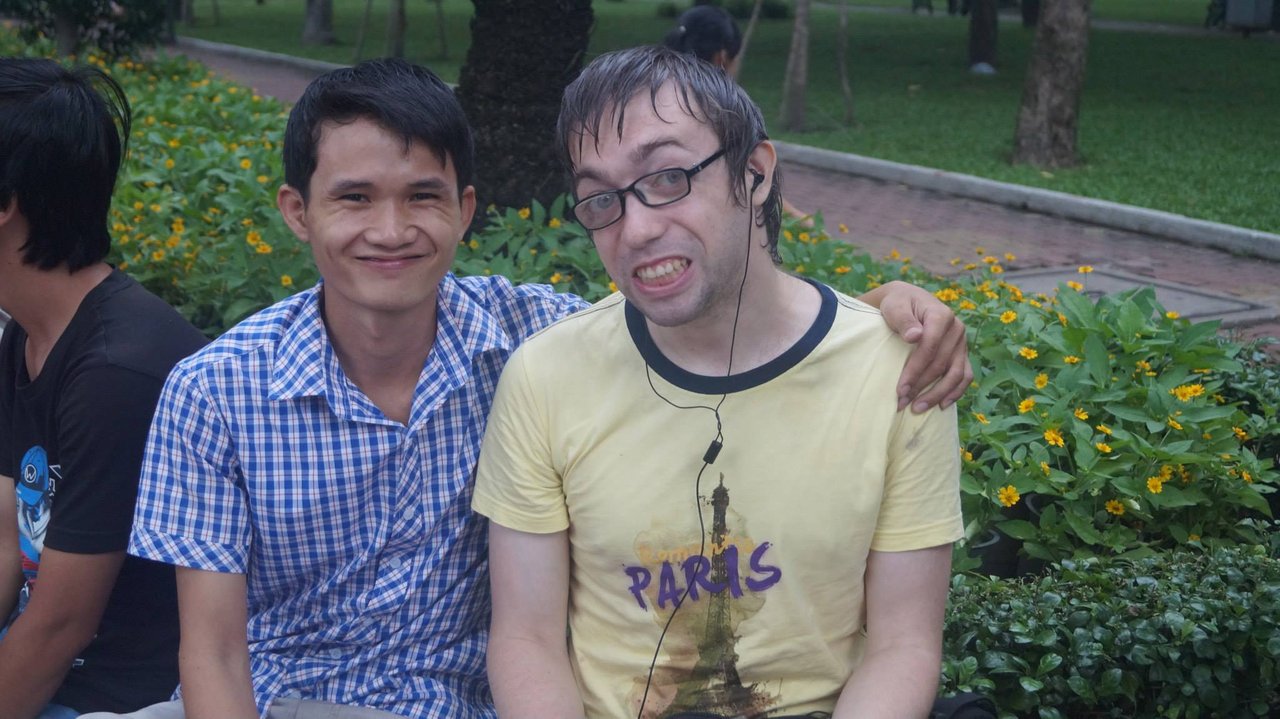 I was still teaching a few different groups but only in District 1 of Saigon from May 2016 until I returned to America in November of 2017, generally speaking. Purio Staff English begun during the third week. Nhu Durga made me an admin of Learning English Together (Facebook Group). Later on, when I asked why I was banned from that group, she said her BF was jealous of me. I was probably telling people to add me and to learn English with me. I was probably posting engaging questions with the goal of starting conversations because that's how people learn English. So, I was asking questions. They may have saw some of that as spam. I was teaching Lego Mark Zuck in 2015. We stopped and then resumed again probably in this month, September of 2016. Bank English - 4M VND/mo. I was at Opera Tea House. Park English. Screenshot pictures. Alex Jones. 9/11. | Rambo Reference. Hillary Clinton Song 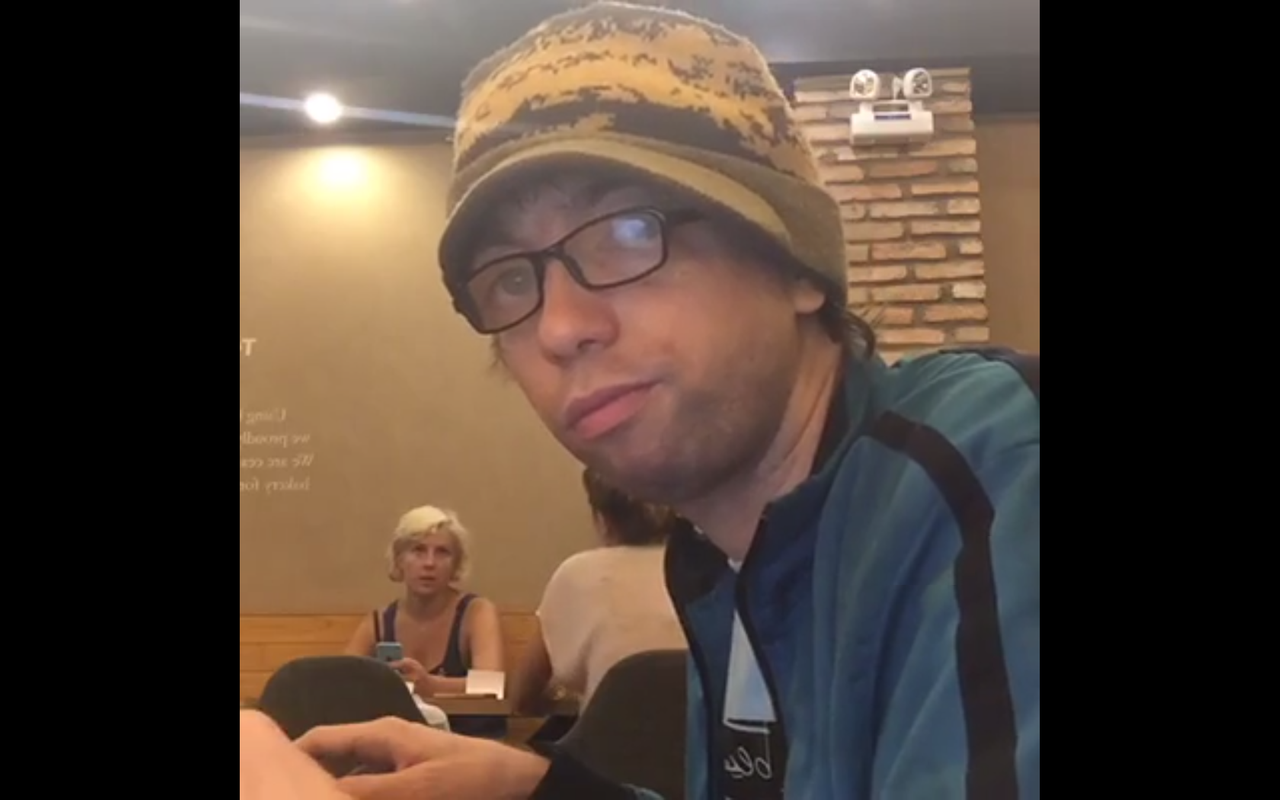 Chinh drove me over to Saigon Timber Cafe for lunch one day. He was one of my students. I was watching Star Trek Next Generation (STNG) through all seven seasons. I made some videos using clips from STNG. They mentioned world government and world war three. I was telling people about President Trump. I even wrote "President Trump" before he became the 45th U.S. President. I would visit the 23/9 Park sometimes as usual. I was teaching Architect English, Purio English, Bank English, Lego Mark English, and possibly a few other classes. I spent most of my free time just watching Star Trek during October of 2016. 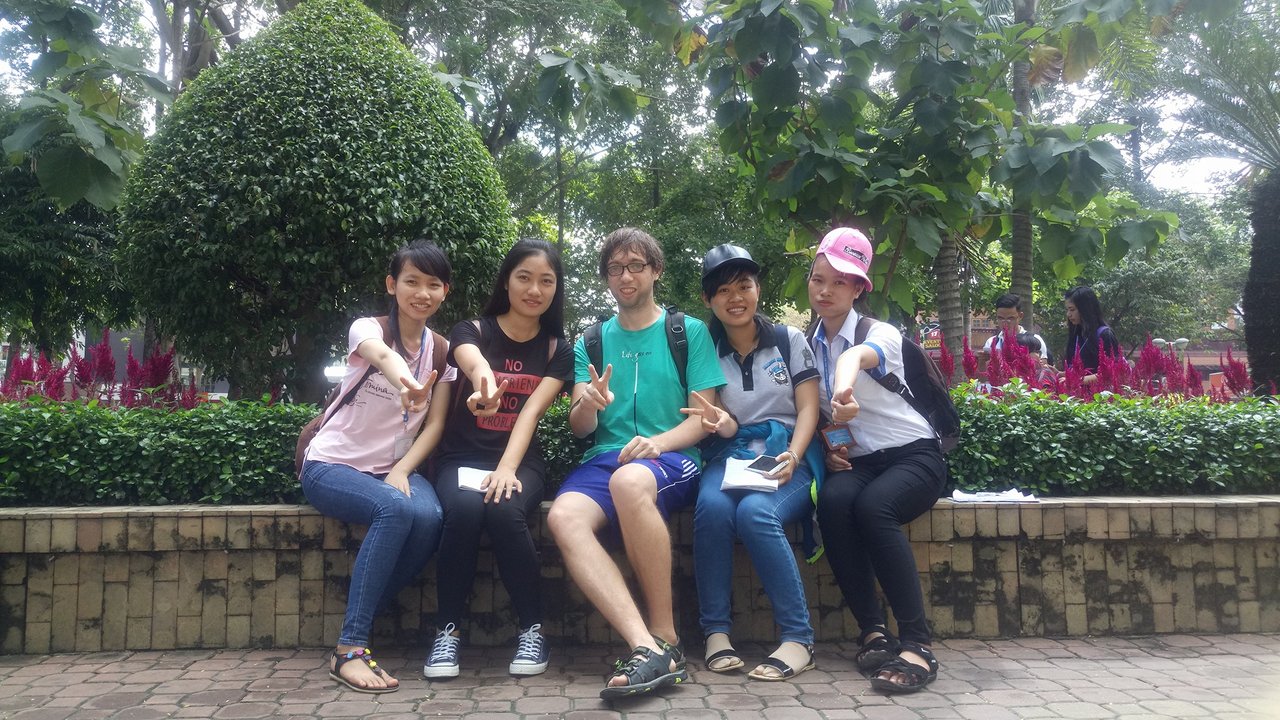 Before Trump was elected, I was telling people Trump would win. Not only that, but I began telling people that Trump would be reelected in 2020 as well. Well, I also wrote about how globalists were trying to steal the U.S. election from Trump. I was still teaching several different English classes as usual, like Park English, Purio English, Architect English, etc. I finished watching all seven seasons of Star Trek Next Generation. I was watching through the X-Files. Revolution Hawaii Vietnam. Vietnam Cat. Caged Chicken. 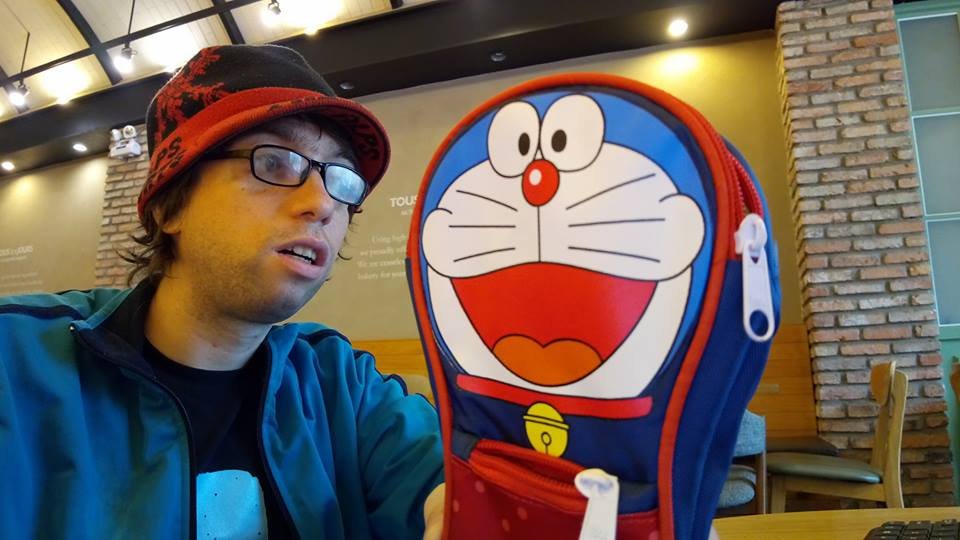 I was posting more selfies it seems, like more on a daily basis, more so, or something like that, on Facebook. I was watching X-Files in December of 2016. I was teaching several different classes as usual, like Purio English, Architect English, Architect's Wife English, and others. I wrote about how Al Gore once visited my home state, Oregon, during the grand-opening of the Westbound MAX train around 1998 or so. I had a debate concerning racism with someone. I took photos at that park. I ate a container of ice-cream on the last day of that year as my way of celebrating New Years, but I regretted all that racist white vanilla ice-cream. Just kidding, that is not actually racist. Well, for the record, real ice-cream would be delicious. Fake ice-cream, and fake news, however, not so much. Arnold, did you take a picture with Duyen Tran's family?
The United States and Vietnam fought a war 50 years ago, do Vietnamese like Americans?

Some Vietnamese do like Americans. Some really like them. Some maybe a little bit. I was teaching English with Duyen Tran in 2016. Her husband and kids are in the photo. She also had some of her students in that photo. She would get foreigners to come speak during some of her classes. So, she would rotate between different foreigners and had me over a few times.