There have been a couple of posts about this over the last week already, but it is worth getting the call to action message out there, whenever some kind of listing is possible. This one is for, https://www.stakingrewards.com/account/vote and it really should be simple for us to get the community to do something as simple as sign up with an email and vote.

So go and bloody well do it.

If you have just voted because of this post, add a comment and a screenshot and I will give a little higher vote on it. In the meantime, this picture is from our nearing completion second toilet. I don't think I even put a picture of what it was like before, but if you have seen Trainspotting and remember "The worst toilet in Scotland" scene - that was approaching what we had here. Okay, I might be exaggerating slightly, but it really was terribly grotty and very poorly done.

Voted yet?
Here is the link again if you misplaced it. We have been a little bit "daring" with or choices of materials by Finnish standards, as we have large tiles and exposed wood on the wall behind the seat and for the ceiling. This is a very small toilet area, making the selection of basin a challenge, as there were very few that could fit, with most of them being terribly ugly. This one is simple and tiny, but will do the job. The mirror is still to go on, as well as a few other fittings, but I think it has come together well and while different, still fits in with the style of the bathroom upstairs, as we carried the black, wood and concrete grey theme over, with the tap and toilet the same models.

The taps themselves have been a drama, as we went with black taps (our shower glass has black trim) and again, there weren't many options available. We ordered the first ones from a smaller Finnish tap company and when they arrived, they were damaged and scratched during the production process. So we sent them back for a replacement. Those were damaged slightly too and finally when we installed and tested, the hand bidet leaked. So they went back too and the third time, the same thing happened so we are getting a refund on them. The one pictured is the new style we chose from Oras, another Finnish company that has a pretty good reputation for their kitchen and bath fittings. When we first made the decision a year ago, they didn't have this tap in black in their range and even after ordering, we had to wait three months to get it, as they have had supply-chain issues like many companies.

Unfortunately, we weren't able to hide the pipes in the walls like we did upstairs, because this wall backs onto the chimney structure, which acts as the core of the house. This means that we have to have it "Finnish style" and on the outside of the walls, something I find very weird.

The other thing we added here is electric floor heating. Where possible, we have used the air-water heating exchange that heats the house radiators to heat the floors instead, but it wasn't possible here and since this is such a small room, the cost isn't very high. Because it sits on an unheated (for now) basement, the floor can get very cold and uncomfortable in the dead of winter, so heating is pretty necessary. While it is changing now, Finns in general don't seem to put much effort or thought into their bathroom spaces, which is strange considering that they often also have saunas and therefore spend more time there than usual. The bathrooms are generally small and impractical to use and follow the Finnishism of "as long as it does the job, it doesn't matter what it looks like". This happens in many aspects of home design here and part of it is because people think style has to be expensive.

While this might not be to everyone's taste, in my opinion, no matter what is being done, there is always a chance to add a little design thought into it. The wood idea came from a picture my wife found somewhere, but generally I have picked a small item of some kind (like the taps) and designed outward from there, rather than go from the big components to the small.

The reason I do this is that it gives some inspiration as a starting point, leading to less generic decisions for the larger pieces of the project. I actually do the same thing with much of my writing, as I don't usually have a high-level topic I want to cover, I have a sentence, quote, or some tiny fragment that I flesh-out into a story. For me at least, it is easier to use a detail as a seed to grow a forest, than in reverse.

Have you voted yet?
https://www.stakingrewards.com/account/vote

There is only half a day or so til closing and we are currently in second place, just behind the leader. For those who vote because of this post, add a screenshot as proof in the comments section and I will add a bit of a higher reward on it than normal. 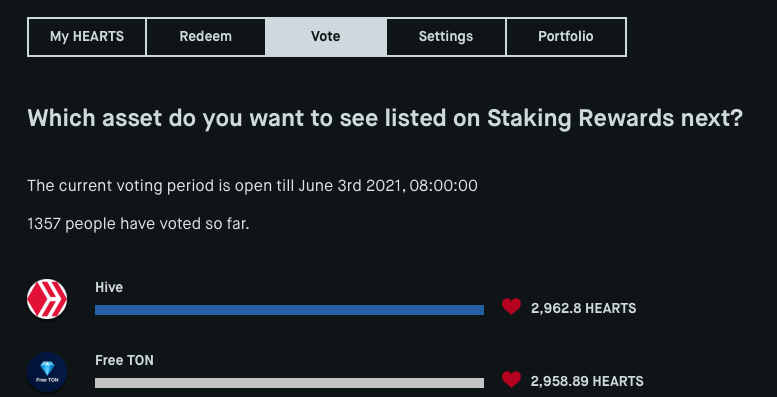 Fine... I voted just because of you... but I wasn't happy with them forcing me to receive their newsletters in order to vote. So I'm happy to help and grumpy about it... I claimed my 10 hearts which is 4.64 Votes which seems... odd.

That is a weird conversion :D
I guess you will have to manually unsubscribe from the newsletter if you want.

Totally... which is no drama really, just a bit sneaky.

Thank you for getting the word out.

already voted.
I hope others do too

the gap is widening.

I finally voted, I was holding back because I do not like being forced to accept automated emails, (the newsletter), but decided to go ahead and vote because I can use gmail to automatically send the newsletter to junk mail, Like all the past vote for us, this will likely be my only visit to their page. Maybe it will draw in a few curious people to Hive,

Small spaces can be pretty hard to work with, but looks like you got everything there you need.

I have a dummy email or two, that I can use for these kinds of things. I check them occasionally, but not often.

It is pretty lame that we can't get more people voting than 700 or so...

The bathroom is decent - it still needs a few things done to it, but all in all, works :)

I have only the one e-mail account and it gets checked about as much as my regular mailbox, not often, once or twice a month.

I actually do the same thing with much of my writing, as I don't usually have a high-level topic I want to cover, I have a sentence, quote, or some tiny fragment that I flesh-out into a story. For me at least, it is easier to use a detail as a seed to grow a forest, than in reverse.

Same here. Maybe I picked it up from you, who knows....

Voted BTW...someone's going to have to take my word for it

I can take your word for it :)

Cool and neat that little bathroom and when you are in a pinch, you can always sign up as an interior designer methinks.

Thanks for the message about the voting too!

Surely a wasted talent methinks.
When you are done on your house, invite the prime minister of Finland's wife for a cup of tea and she will employ you on the spot as the national state house interior designer 🙂

My pleasure and thank you also for the friendship.

I really enjoy reading you, I could say I'm your fan hahahaha. Here is my support Perhaps I should get an OnlyFans page ;D

Thanks for taking the time to vote :)

I really like the content you create, it's natural and fluid. Thank you for contributing so much to the community

it's natural and fluid.

I spend a lot of energy talking to myself! :P

I voted for Hive earlier due to one of @acidyo 's posts, but I absolutely love that you're encouraging others who haven't yet to do so.

Also, this bathroom looks like it's coming along great, and I absolutely love heated floors.

I also agree with you that there's always a chance to add a little design thought into things, and I'm glad you espouse such a philosophy, I hope more and more do the same, if so, we'd have quite a nicely designed world. :)

I'll reblog this to hopefully reach more people, and wish you a great day! 🙏

Many people have already voted, but I think it is good to pick up the stragglers. I was going to post yesterday about this, but saw Acid's go up just before I started writing, so thought I would wait a day as a reminder.

Thanks for the reblog too - I hope it helps :)

Totally agreed. And smart approach to make a reminder a day after. Love it, and I hope the same! 🙏

I've actually seen bathrooms a bit smaller...believe it or not! However, the fixtures are something else: I love them in that matte black as well as the color of the wood. 👋
I already voted a few days back on a call from @theycallmedan.
For anything in favor of making Hive grow and be noticed I will always be willing.
On the other hand, I want your bathroom! 😄

I like the color of the tile. Yeah, it is a shame you could not hide the pipes. I need to vote.

Even though it is grey, there is still warmth in the room because of the wood. Considering it is a toilet, there is a nice feel :)

Let me know when yo vote.