This is a very different type of post from what I usually post, and I might end up making enemies in this community, but I feel like this needs more attention brought to it.

From what I've seen and experiences, this community is very welcoming to artists and appreciate their work... which sadly leads to all kinds of scums lying and trying to repurpose old art or post stolen art, in hopes of farming upvotes and even getting prizes from the community contests. So far this behavior seems to be endorsed, as even the official Splinterlands Twitter account reposted a piece of fake fanart (more about that later). Which I believe needs to stop because it does not only bring bad name to Splinterlands, but also is insulting to artists who put genuine work to their creations. And yes, that does include me. Call me petty. But I am doing this because I believe it has to be done.

I do want to clarify, that I am not posting this because I hate Splinterlands. It's quite the opposite, I love this game, and play it daily, participate in my guild's brawls too, and sometimes join tournaments. Recently, I even tried to apply for a job position at Splinterlands, as I wanted to be a part of it, and I realize that this post is going to reduce my chances at getting the said job to zero, but transparency and integrity are more important to me, and I hope that by bringing attention to this issue, it will help community and maybe even help Splinterlands avoid problems in the future with potential legal issues due to copyright.

So let's get started and bring @collectorofchaos under the spotlight!!!

I wouldn't have gone as far as name him like this, but he keeps treating me like an idiot, so I might as well tear his posts apart. Recently he posted a fanart piece claiming it to be featuring Grum... but it is not, it is a fanart piece for Dark Souls.

Now, for my non-artist friends, it seems to be a bit harder to tell different characters apart, so I will be providing you with some visual aids. 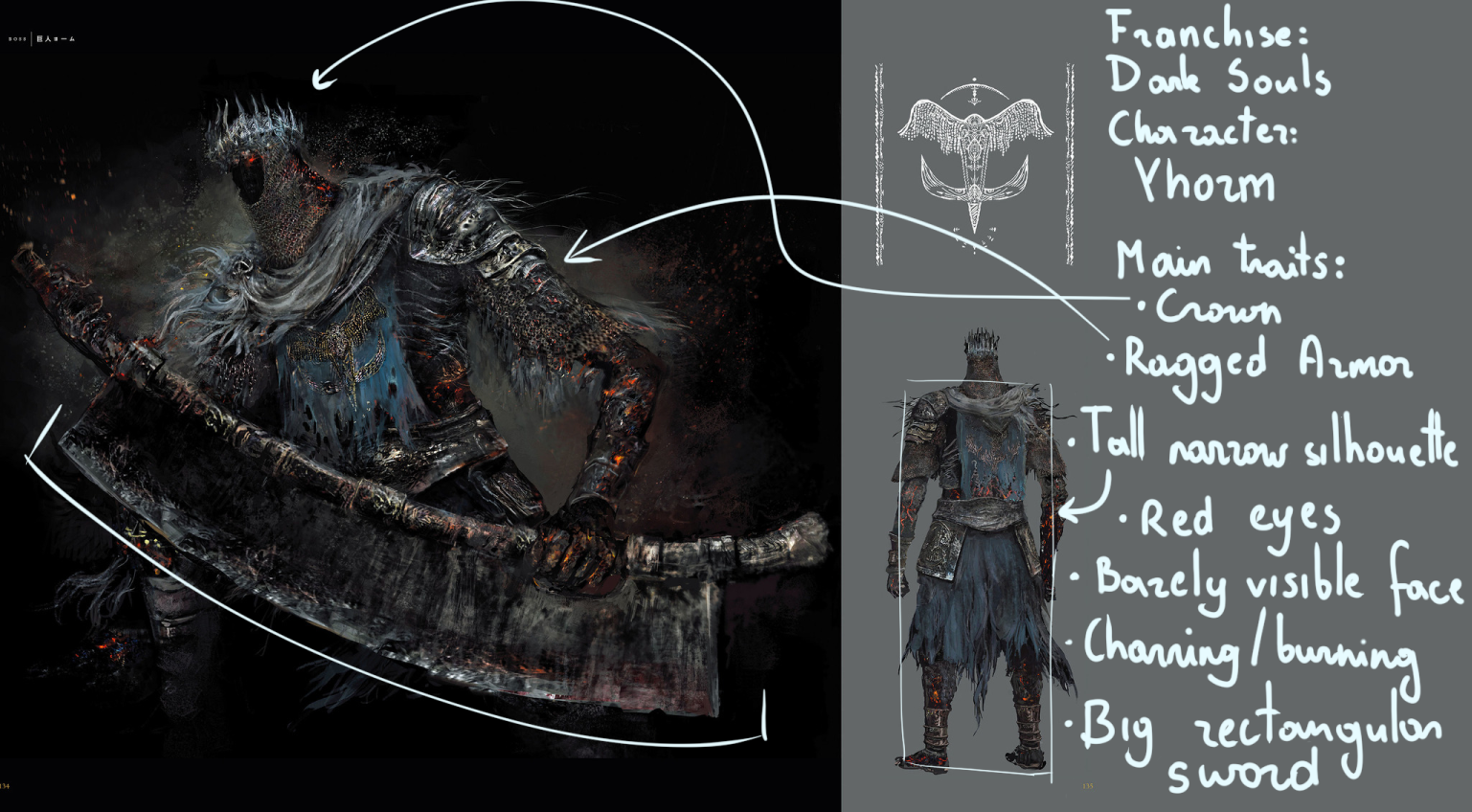 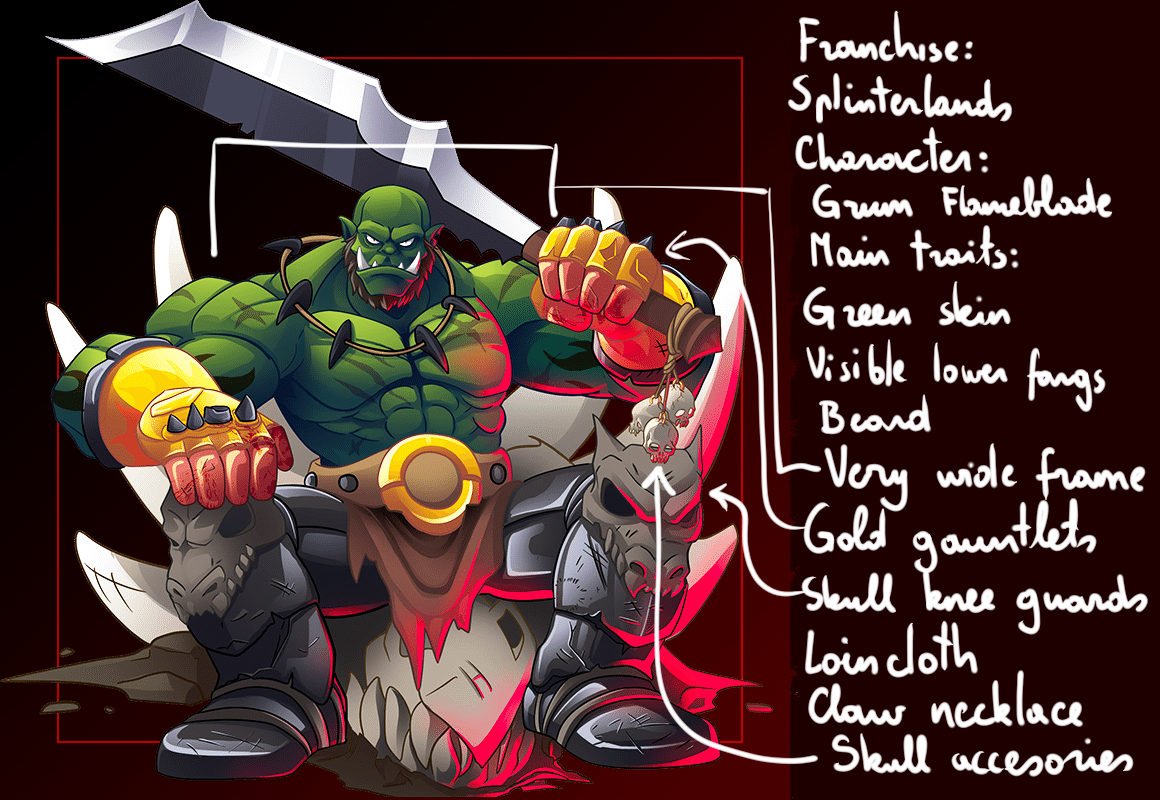 So, all that's left to do now, is to take these two lists and compare them to the fanart in question: 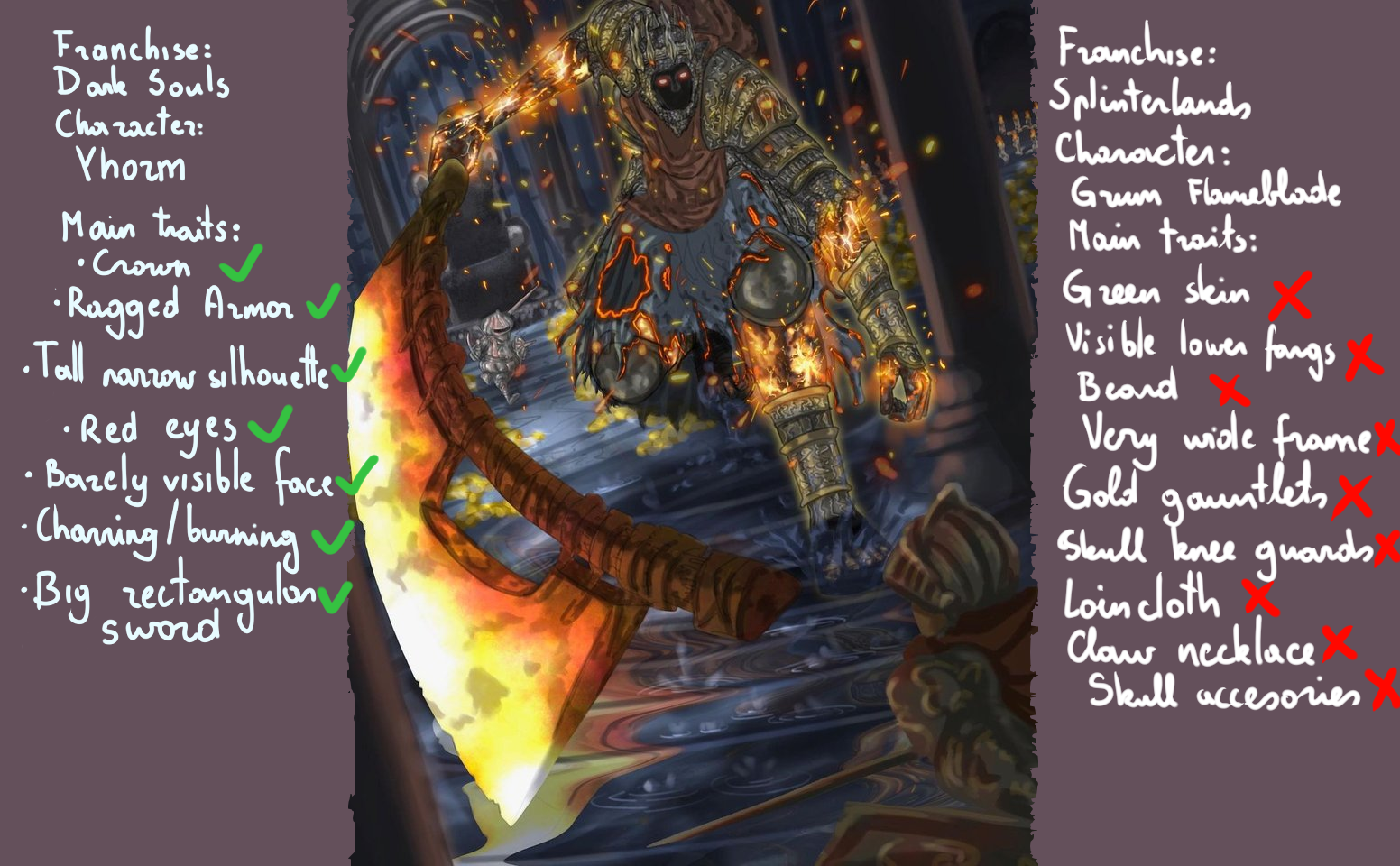 When asked about this, the original posted insists with their lies, saying they only got inspired by the Dark Souls, while completely ignoring everything I pointed out, including the fact that there's absolutely not a single character design trait taken from Grum and integrated in the fanart in question.

Also, let's not forget the secondary characters, in the background you can see Siegmeyer of Catarina, who does not belong to Splinterlands. 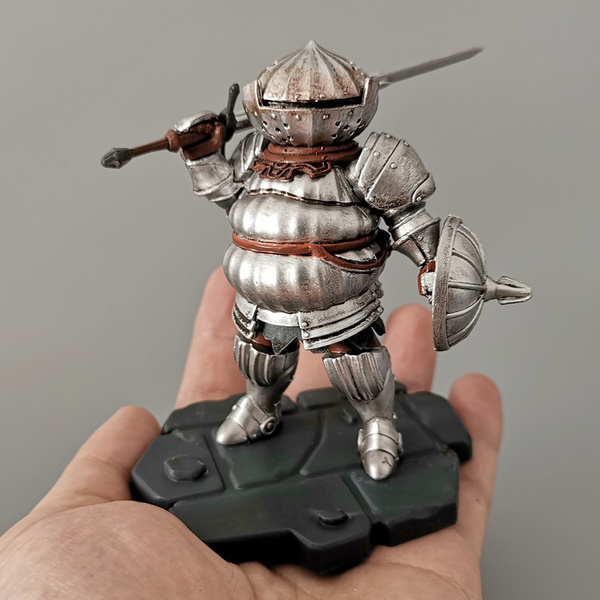 It gets worse, since this guy has a LOOOOOOOOONG history of stealing art and posting it as Splinterlands fanarts. Which by the way, I have pointed out weeks ago, for the Splinterlands fanart contest moderators. (You can also check out the following week's discussion as there's been a bunch of dissatisfied community members with the way contest has been handled continuously)

The stolen fanart from that week was featuring Deltarune's character Ralsei, while the artist once again was claiming that it is a splinterland's Venari seedsmith... Ralsei is a goat... Venari are rats. Do I need to say anything more? 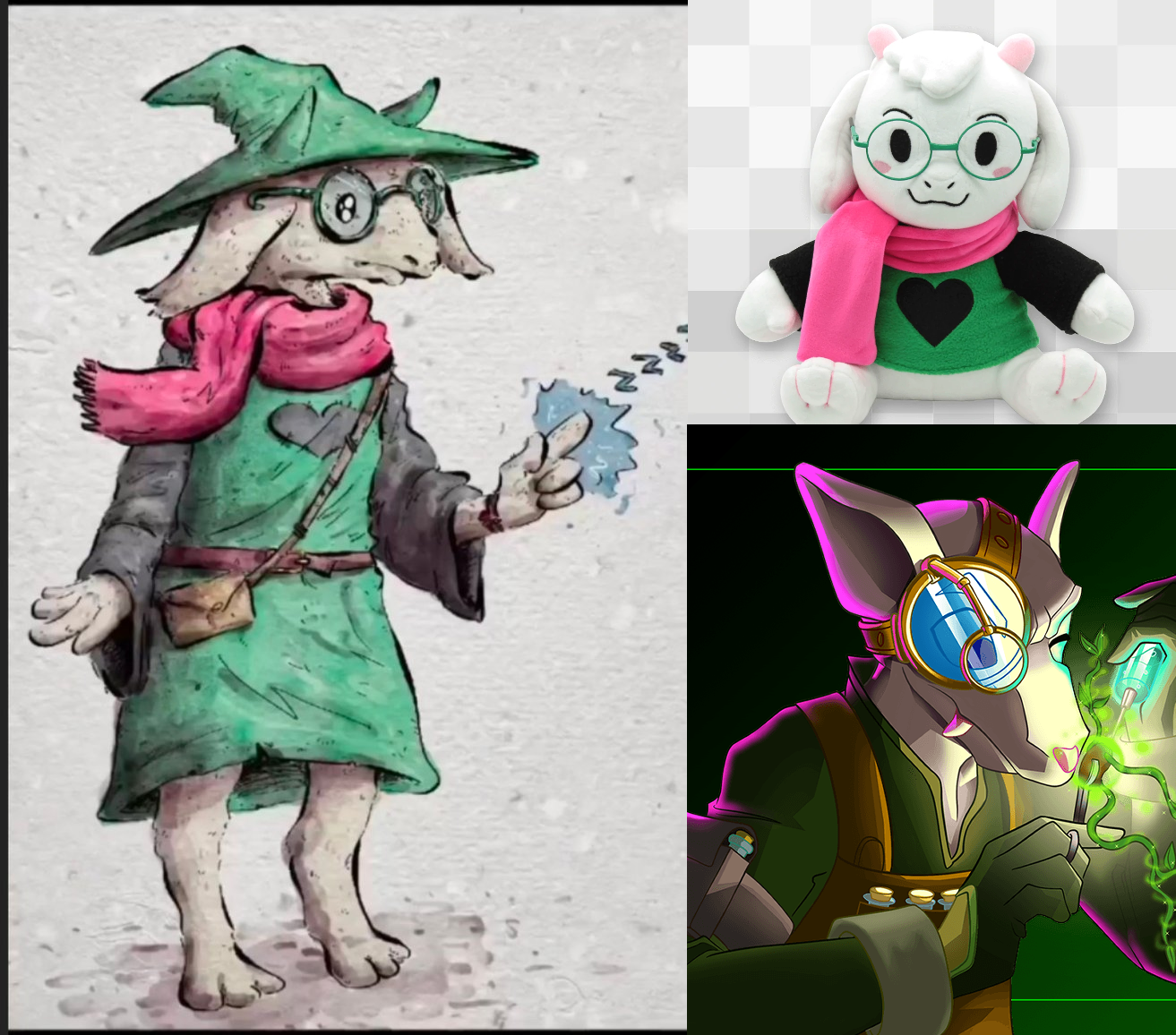 As I said earlier, Splinterlands don't seem to mind this at all, as they endorse it, so much in fact, that they posted it on their official twitter account. 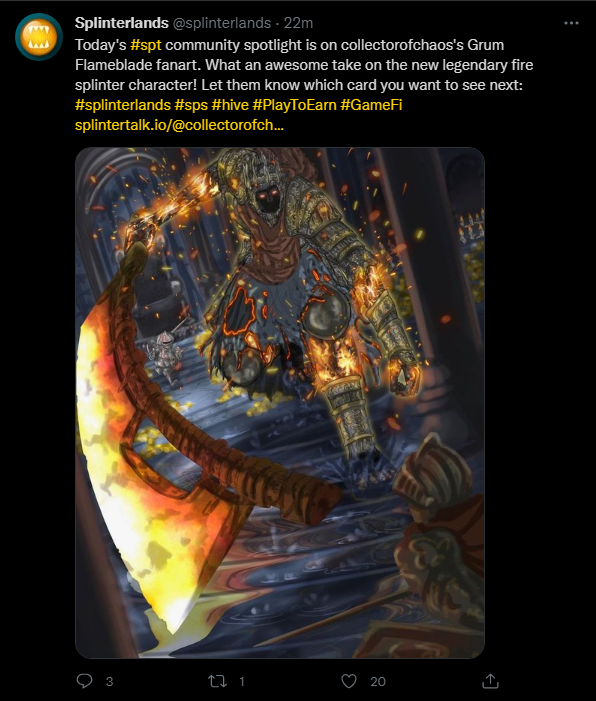 After a few hours, and multiple people calling it out, they finally took down the post.

I would say I am surprised by this behavior, but I really can't since @steemmonsters / @splinterlands have no issues with stealing art from other franchises themselves: 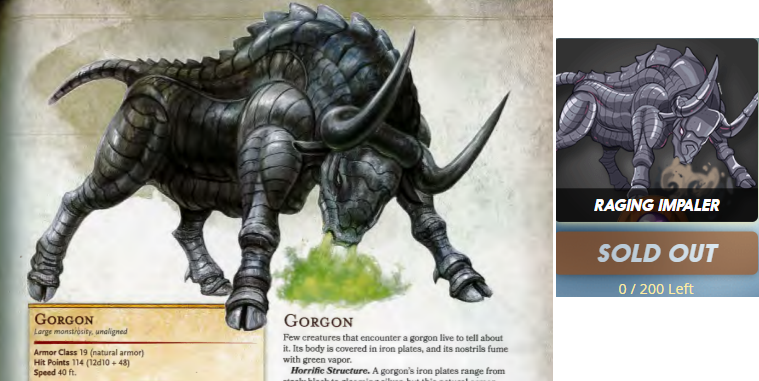 The left side of the image is taken from D&D Monster manual book - you can check for yourself online here, on page 172: https://online.anyflip.com/duex/ixpz/mobile/index.html#p=172 The image on the right is an already sold out skin for Splinterlands Raging Impaler.

To end this on a nicer note, I'd like to shout out to some amazing artists, who are using their skills to genuinely contribute to the community! So if you are reading this, please check out these artists and show them some love, which they actually deserve.

Well said and well done..That pic is stolen,,there is no edit or anything done to make different at all..it is Thievery at its highest..you cannot call yourself an artist by doing that,especially in an NFT based game..Sadly the SL team never even fact checked or do even a little background research

Oh, it really is! This guy keeps posting nothing but fanarts for other franchises, and raking in contest rewards while scamming judges who don't know better.

and that obelisk win the contest 🤣

Very well said! Thank you so much as well for mentioning me and appreciating my works!<3
It is actually very courageous of you to post this and I hope it could reach everyone! Splinterlands team should always check first before choosing their winners.

Totally agree, this guy is a shameless scammer. How can you call copying characters from other sources an inspiration? We addressed the issue a long time ago, yet he still does the same thing. It seems like the splinterlands team doesn't have enough people to control where the art is coming from. The Gordon is a perfect example, it's like asking to get sued.

Oh, I forgot to tag you two. Since you were vocal about Splinterlands fanart contest before, I would like to heard your thoughts on this @rowell @aak23

I think it's great that you do this. I think that those in charge of the contests do not take the trouble to verify the veracity of the participating arts, and I think this negatively affects Splinterlands, before I was always waiting to participate, but time and these things have discouraged me a bit little bit.
I have also seen some art copied in contests, but I have not paid attention to it or said anything because the voice of ordinary people is rarely heard, and even less so if it is Latino.

It takes a good dose of courage to point out what you did. Shout out to you and also you decided to walk the path of truth and it takes sacrifice. I'm not that surpised on what some users can do once money is involved, but more from a entity that should be completely professional like SL did...

Thank you for your words!
And yes, I know. I've got some push-back last time that I tried to point out that non-splinterland art enters these contests, but since it keeps happening, I decided that it needs its own post, and not just a couple of comments.
As for that skin art piece - I've checked splinterlands discord as well as Hive, and could not find anyone pointing this out before at all. It's not something that I found myself either, since I never check skin store - but a friend of mine pointed that out, and I just find it so baffling that a game of this scale would allow this to slip.

That looks nothing at all like Grum. Even if you don't know it is a Dark Souls character, the only thing even remotely similar to Grum is the loincloth... exists... makes me wonder, do the community managers even play the game? NO ONE that has seen the Grum card art would look at that 'fanart' and think oh cool, that is a neat version of Grum.

I've seen a decent amount of this kind of stuff in the art contests. I stopped entering months ago. Even though I placed both times I entered and it is a great way to get upvotes and stuff... if they are going to continue the art contest they really need to do a little better with the judging and screening.

The Raging Impaler skin is also not a good look. There are probably a million drawings of bull-like creatures in that pose but the line work completely gives away that was traced from the Gorgon.

I think Splinterlands team is going to need to get more used to being under a microscope. I, and many others, tend to give them a bit of a pass because we like the game and it has humble beginnings with a small team. Letting that kind of stuff slide a year ago was one thing when 1000 people knew about the game. Now it is one of the biggest names in the space, they have a larger team, and hundreds of thousands of people are looking at everything they do. They are going to have to cut this crap out and do better.

Very well said.
I like listening to AMAs once in a while, and them praising the Chaos Legion art and the community growth is so nice, it makes me feel excited and glad that I am part of this community, and yet they let stuff like this slide... and then it feels like a slap to the face.

I won't stop making fanarts, cuz I enjoy the game, but I really don't want anything to do with the community contests, cuz they just leave bitter taste in my mouth, after seeing this happen again and again.

Maybe it would be worth trying to get this as a question in the AMA. "When is Splinterlands going to take art theft and fake fanart contest entries more seriously?" I have to imagine the guys at the top have no clue this is happening.

wow.... i did not know this was posted on the official twitter page.

anyways... I respect your opinions & I'll say it once again - i did the yhorm , because i found him and grum similar , with the firey sword !

Ofcourse , one can draw the same thing , but i believe , its interesting to see it in different forms. That is all i thought & tried to draw the yhorm screen ( i agree its ditto same with no extra creativity - which is your point & i may try to fix that ) , but don't call it thievery please !

It's not thievery, it's scamming.
You lying pos.
There's a hundred ways to mash two characters together, or to swap their outfits, or to integrate details from one design into the other, and you did none.

Your 'I was not creative enough' excuse does not fly when you have lied in your posts over and over again. All your art posts include CORRECT character traits for OTHER FRANCHISE CHARACTERS.

Congratulations @telumen! You have completed the following achievement on the Hive blockchain and have been rewarded with new badge(s):

Yay! 🤗
Your content has been boosted with Ecency Points, by @telumen.
Use Ecency daily to boost your growth on platform!